An ode in greenery 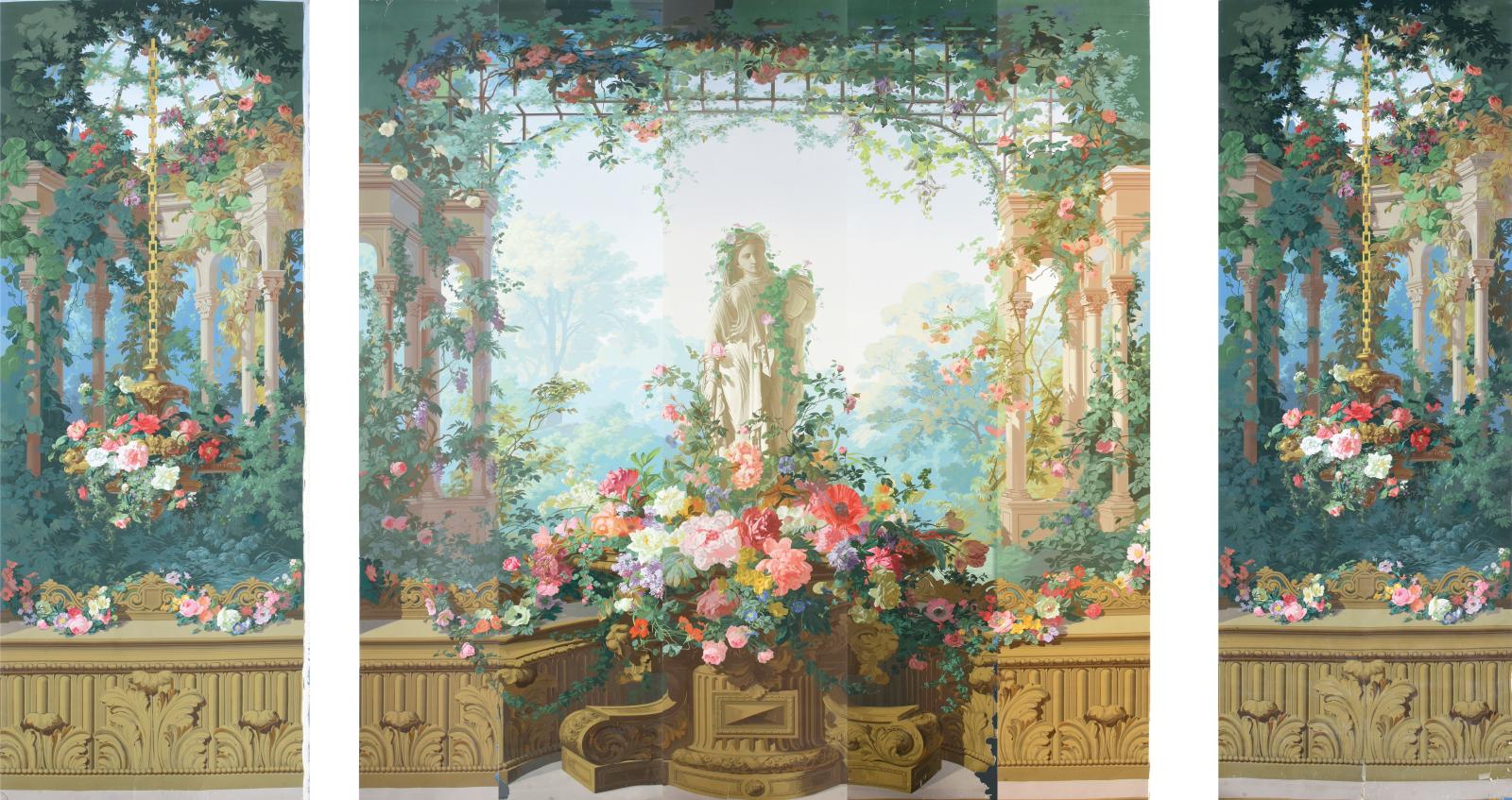 Frozen in her sorrowful solitude, Armida reigns over a luxuriant garden: an earthly paradise designed to delight the viewers of this trompe l'oeil wallpaper. Its creator, the painter Édouard Muller, based it on James Pradier's statue Pandora, exhibited at the Paris Salon in 1850, but it actually depicts the heroine of Tasso's Jerusalem Delivered. In this Italian poem of 1581, the Muslim sorceress, daughter of the King of Damascus, fights the Christians involved in the first Crusade by seducing numerous knights, luring them to her enchanted island and turning them into beasts. Enamoured of the Crusader hero Rinaldo, she bewitches him to make him fall in love with her, until two knights come and free him from the spell. The poem was very popular in the 17th and 18th centuries, but its influence on art and literature waned during the 19th century, and the work now has little interest for contemporary readers. However, it is not that surprising to find the poem evoked in this 1854 composition, as Romantic writers canonised Tasso, making him the embodiment of the unhappy or cursed poet, and artists drew inspiration from his work to explore lavish, exotic landscapes.
In this piece produced by Jules Desfossé's factory, nature is so beautifully arranged and gracefully staged that it evokes Jean-Baptiste Monnoyer's theatrical compositions or the Tenture des Mois (a hanging based on the months), woven at the Gobelins factory for Louis XIV and subsequently entrusted to the Mobilier National. But here there are no references to any royal houses: the meticulously reproduced gazebos and trelliswork really reflect the greenhouses, verandas and winter gardens so fashionable in Second Empire Paris. At a period of major botanical discoveries and exoticism, when Japanese culture increasingly infiltrated bourgeois interiors, trompe l'oeil wallpaper decorations became ever-more popular in these new spaces full of highly original plants, intended to assuage wealthy city dwellers' longing for distant climes. This decorative work showing Armida's garden, unveiled in 1855 at the Paris Universal Exhibition, earned Jules Desfossé much acclaim from the international jury, who considered him "one of the foremost exponents in the wallpaper industry, worthy of the reward [it] bestowed on him in the shape of the first-class medal".