Millet: the first steps of an accomplished artist

Jean-François Millet's art lay in transforming the everyday into the everlasting. Inspired by his daily life in Barbizon, this intimate family scene in pastel is touchingly universal. 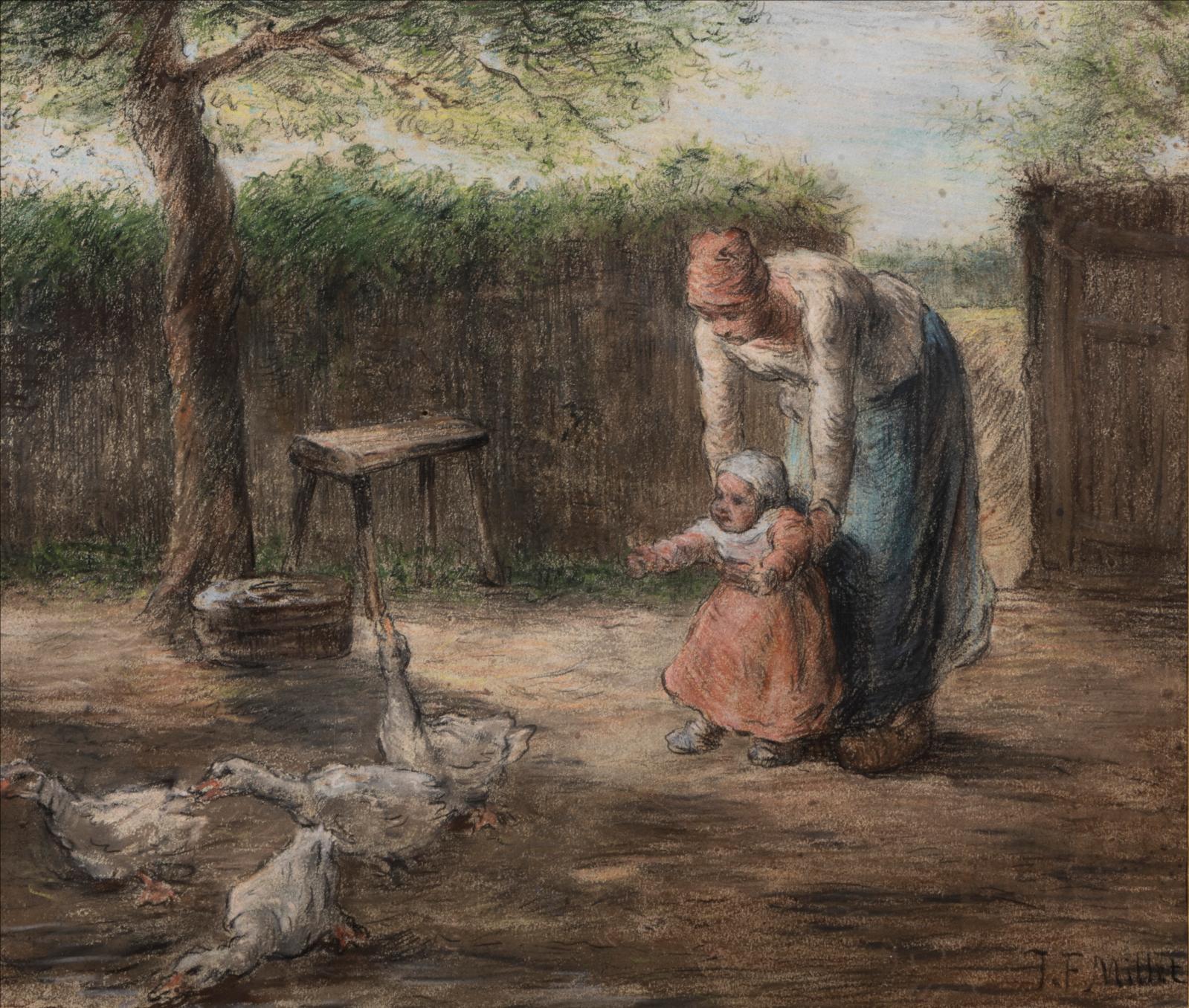 Jean-François Millet was a born draughtsman. His rapidly-drawn sketches and studies from life were essential stages in his paintings. He always worked in pastel, too, especially in around 1845 and at the end of his life. Imbued with a spontaneity not found with oils, this technique particularly suited the authenticity of his favourite subjects, found in the daily round of peasant life. For when he moved from Paris to Barbizon in 1849, Millet finished with his Arcadian scenes and sensual nudes: "The human, the truly human side of life is what moves me," he wrote. And he was not alone. The popularity of his drawings, well established by the 1860s, encouraged him to continue in this direction. In a world much changed by the upheavals of the industrial revolution, many had a nostalgic eye for his depictions of a life of labour, but in phase with nature. Millet just wished to express his vision of the human condition – as witness this pastel, with its still fresh, beautifully shaded colours. The artist explored this intimate scene of family life on several occasions.

From Millet to Van Gogh
For example, the child taking his first staggering steps is the subject of another version of 1858: a pencil and pastel with the same title and the mother and son in exactly the same attitude, now in the Laurens Rogers Museum of Art in Laurel, Mississipi, USA. The scene is still set in a farmyard, but the view is longer, and the geese have disappeared. On the other side of the vegetable patch now lying at his feet, the father has laid down his tool and is stretching his arms out to the toddler. The composition was copied in 1890 by Vincent Van Gogh, a keen admirer of Millet, whom he considered a model. Before finalising this version, the Barbizon master made a preparatory drawing in graphite (now part of the Musée d’Orsay collection and on show in the Louvre) because he liked giving his works time to mature, working the same theme with subtle variations in endless sketches. He treated his pastels like paintings, themselves slowly developed because they were thoughtfully considered. His quest for just the right attitude and the quintessential gesture gave his simplest subjects a classic grandeur. With Millet, wrote Van Gogh, "everything is both reality and symbol."

The spirit of the 19th century
Fontainebleau - 9-11, rue Royale - 77300
Osenat
Info and sales conditions
Catalogue
Results
Newsfeed
See all news
Due to the summer holidays there will be a pause in the newsfeed. We will be back Monday, August 24th. Have a wonderful summer vacation!
Met Museum in New York acquires Wangechi Mutu sculptures
US House of Representatives vote to create a national museum dedicated to Latin Americans
Church volunteer confesses to starting the Nantes Cathedral fire
Not to be missed
Pre-sale
Figurative art from van Goyen to Combas and the inescapable…
This 1955 work by Bernard Buffet belongs to a series of around 10…
Pre-sale
Henri Lebasque, painting the zest for life
His soft, nuanced palette captures moments of simple happiness on…
Pre-sale
The Gilles Labrosse collection: fashion throughout the…
Amassed by an impassioned enthusiast, one of the largest private…
Pre-sale
Achille Laugé: Cailhau in perspective
Found during an inventory carried out for an estate in the Var,…