With this blue sofa, the Italian artist specializing in close-up views offers a mellow vision of hyperrealism. Who will yield to the urge to lie down on it? 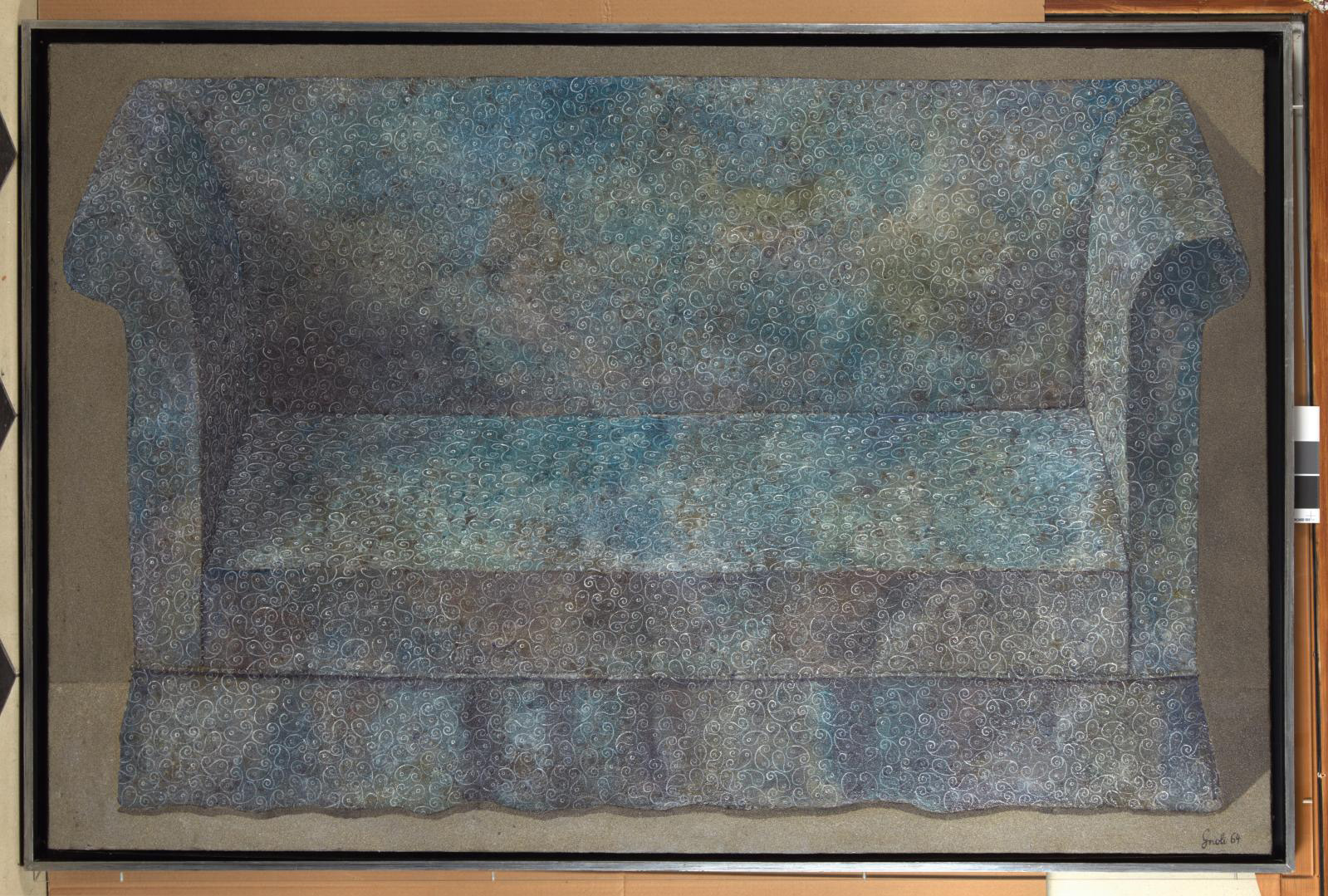 Though liberally represented on Artnet, the artist is rare in the French market, so the appearance of this Blue Sofa at Drouot in April is already an event in itself. In the family of post-war hyperrealists, Domenico Gnoli (1933-1970) experienced meteoric success, however, his career was brutally cut short on the eve of his 37th birthday—like that of Raphael and Van Gogh: too early to reveal his full potential; too early, as well, to convince the public of his time. His marginal work in the 1960s was not really viewed with a fresh eye until the 1980s.

But art was definitely his fairy godmother, as he enjoyed a cultivated childhood in Rome with a ceramist mother, Annie de Garrou, and an art historian father, Umberto Gnoli, who considered painting one of the only acceptable things in life. So Domenico's path clearly lay in this direction. He began exploring art at 17, and became a theater decorator three years later. Paris, Zurich and London were all set to receive him, but he felt that the profession involved too much talk, and teamwork was unsuited to him. He then turned to illustration working for the press with great success, aided by his good looks and unashamed dandyism. He lived in New York from 1955 to 1962, earning money as a painter, and was influenced the Pop art then dominating the art scene. The fact that he chose and meticulously reproduced common objects—focusing on the wardrobe, with jackets, ties, shoes, collars, necklaces, trousers, etc.—obviously linked him to the movement, but he treated them in detail, and extremely close-up.

His art should also be viewed from the perspective of hyperrealism—for example, a close-up view of a button on a vast canvas of several square meters, with no escape for the eye; a much-enlarged hairstyle, or everyday objects taken out of context. He painted trivial things (a bed, an armchair, a blanket and so on) as if painting a portrait. The sofa here falls into this category.

The Metaphysics of the Detail
His acrylic and sand canvases are imposing, accentuating the almost metaphysical aspect of his subjects. Giorgio de Chirico is not far away, but that's not the only thing. The objects are so detached from their context and function, isolated and represented for themselves, that they take on a mysterious value. Some critics have even seen them as poetic. Gnoli was part of the line of Italian artists of the first half of the 20th century, and absorbed certain lessons faithfully, mainly those of Giorgio Morandi, the master of simplicity. But by representing his objects without staging in a head-on, highly imposing way, he completely aligned himself with the second half of the century as a man who boldly and assertively did away with codes. Not only that, but he was interested in textures, like those of hair or fabrics. The medium he used, acrylic mixed with sand, contributed to this singular rendering and softness of tone, a far cry from the stridency of Pop art. The material, served by his refined draftsmanship, has a particular matt quality providing endless possibilities for bringing out fine streaks, floral embroidery, silk or the softness of a blanket—all in a deafening, disturbing silence. This is what intrigues and appeals. The result is that his paintings are now highly regarded in the international market and hang on the walls of the most demanding European museums in Berlin, Amsterdam, Madrid, Cologne, Vienna, Hamburg, Rome and Venice. Though not yet in Paris...

In May 2012, the New York gallery Luxembourg & Dayan devoted an exhibition to him called "Detail of a Detail". In the catalog, there was a posthumous interview with the artist by Maurizio Cattelan, who shaped his questions to fit the answers, adapting them to quotes by Gnoli. So we can reasonably give them credit. Here we read: "I am metaphysical in that I seek a non-speaking, still, atmospheric painting." To the question about pop art's fascination with common objects, the answer is: "I can only speak for myself, but imagination and invention cannot spawn anything more important, more beautiful and more terrifying than the common object, magnified by the attention we give it." What more could there be? The impact of this work in Paris. We'll find out on April 13.

Prunella Clough and Keith Vaughan may not register the highest results, but they are probably the most elusive artists on this side of the Channel. 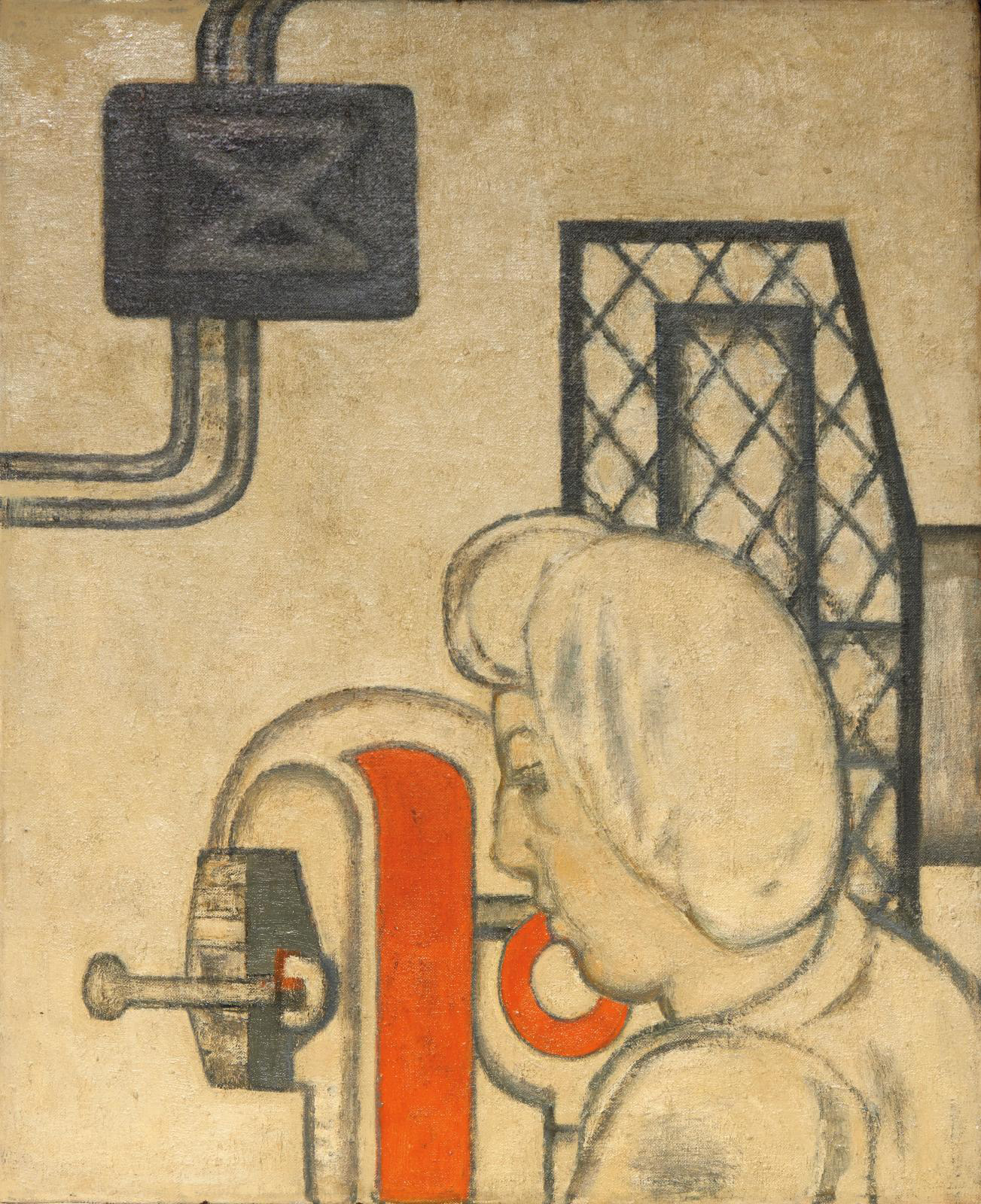 It's impossible to find their works in the French market, so don't even try. They are usually on offer in London. So an extraordinary opportunity is now coming up with this set of drawings and paintings by Prunella Clough and Keith Vaughan, two British artists belonging to the same circle.

Born into a wealthy family in the Chelsea neighborhood in London—her father was poet Eric Taylor, her aunt designer Eileen Gray—Prunella Clough (1919-1999) studied with sculptor Henry Moore before starting to paint, mainly industrial landscapes. Men and women at work in factories or on building sites, and images of power stations or industrial and urban sites inspired a body of work that moved increasingly towards abstract forms, like fragments of detritus or consumer society waste. Her palette is divided between soft or neutral colors enhanced by more vibrant tones. You will need €30,000/40,000 for the 1953 painting Woman Minding Machine, and €1,000 to €2,000 for her drawings, dating from the 1960s to 1980s.

Modern and contemporary paintings
Salle 6 - Drouot-Richelieu - 9, rue Drouot - 75009
Auction Art Rémy Le Fur & Associés
Info and sales conditions
Catalogue
Salerooms
Newsfeed
See all news
White Cube: A film and “reverse gentrification project” in D.R.C.
Pictish Royal Hillfort Excavated in Scotland
Denise Gardner: First Black Woman to Lead Art Institute of Chicago Board
Major Works by Self-taught Artists Given to High Museum of Art
Not to be missed
Pre-sale
A Beautiful Gemstone
As this necklace mounted by Van Cleef & Arpels in the 1950s-1960s…
Pre-sale
The Eclectic Taste of a Senator
Lozère's senator, Paulin Daudé-Gleize, was well ahead in the decorative…
Pre-sale
Oscar Niemeyer: The "Poet of Curves"
Designed in the 1970s, this chair, combining metal and fabric upholstery,…
Pre-sale
Albinus and the Art of the Book
Celebrated for its magnificent illustrations, Bernardi Siegfried…