Exoticism is the order of the day with this lacquer panel by Gaston Suisse. The interior designer, one of the leading names in Art Deco, once again demonstrates his mastery of this very ancient technique. 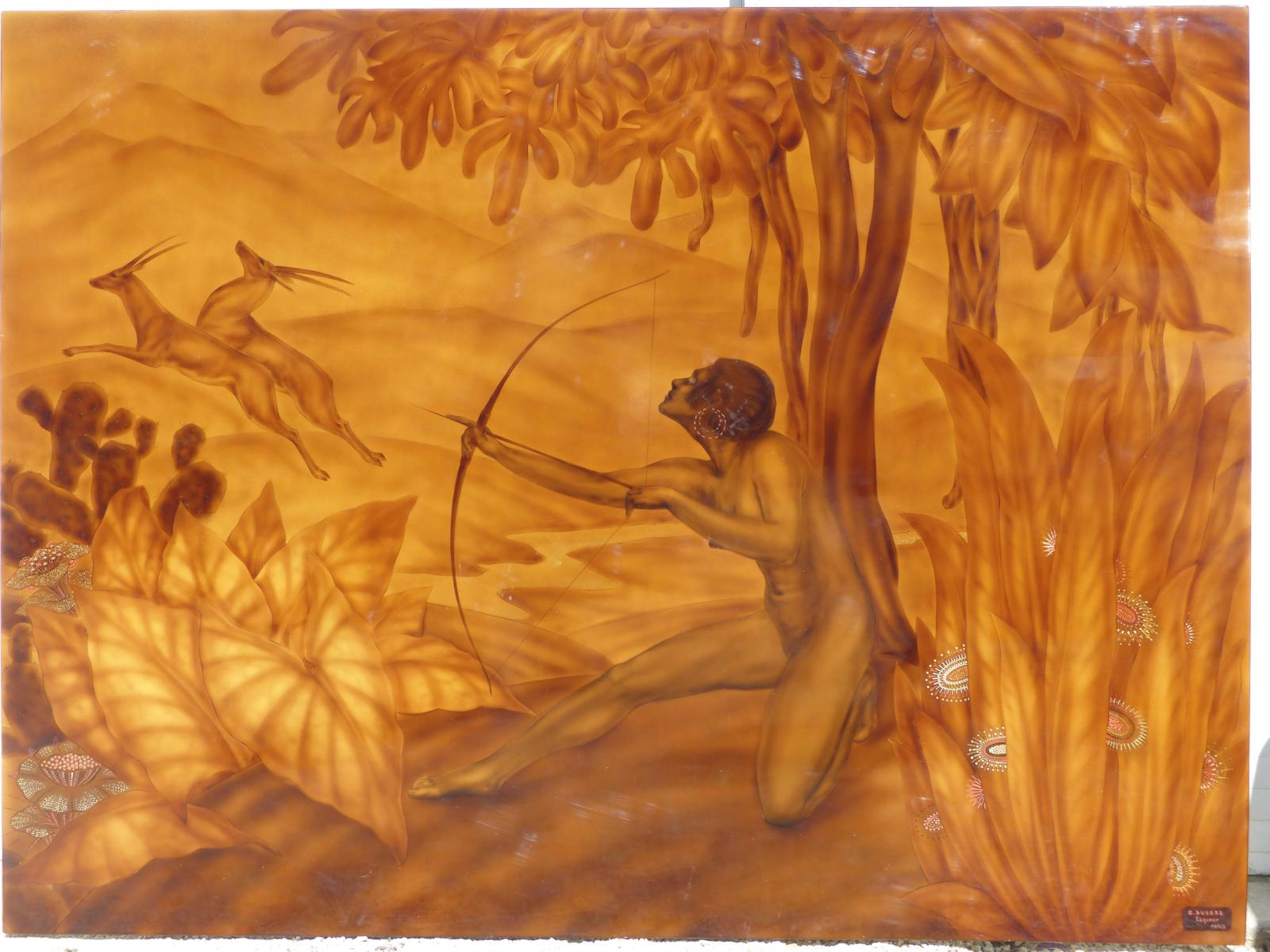 Dated 1922 according to studio photos of his father, this panel is a fine example of his work: a mixture of Oriental inspiration, the Art Deco aesthetic, the Asian technique and Antique-style drawing, all set against a bronze powder background giving a timeless feel to the piece, which must have looked marvellous in a Ruhlmann setting. Gaston Suisse's career was shaped by his fascination with Far Eastern art. He acquired the passion when he was young through his collector and bibliophile father, who was friends with Samuel Bing, the famous Paris dealer responsible for the emergence of Japonism in the late 19th century. He also took an interest in drawing early on. As he liked sketching animals, he would visit the Jardin des Plantes, where he met and formed a friendship with Paul Jouve. Encouraged by his father, he entered the École Supérieure des Arts Décoratifs where he learned the lacquer technique. This remained a lifelong practice he perfected over the years. After a war spent first in the trenches then at the Salonica front, Gaston Suisse resumed work again at the Arts Décoratifs, then at the École des Arts Appliqués. Thanks to new methods, including the use of synthetic varnishes, to which coloured pigments could be added and which could be applied with a spray gun (rather than using the lengthy sandpapering technique), he considerably broadened the chromatic range and decorative effects of lacquering. He was made a member of the Salon d’Automne when he first participated in 1926, and rapidly met with success, furthered by his winning a gold medal at the Paris International Exhibition of 1937. Commissioned by leading interior designers like Jansen, Brandt and Ruhlmann and top brands like the Galeries Lafayette and Hermès, his lacquered furniture with geometric motifs and Asian-style decorated panels includes some of the most beautiful and important pieces of this period.

tableaux, mobilier et objets d'art
Bourges - 11, rue Fulton - 18000
Michel Darmancier et Olivier Clair
Info and sales conditions
News feed
See all news
2020 Turner prize cancelled, selected artists to receive £10k fellowships instead
Greece’s Culture Minister renews call for the return of the Parthenon marbles
Pérez Art Museum buys art to support local cultural sector
The city of Paris announces financial boost for the culture sector
Not to be missed
Pre-sale
Vincent Lécuyer Collection
The Paris gallery owner, who died in July 2019, left a group of…
Pre-sale
A peerless pair
Although these commodes were produced at different times, they make…
Pre-sale
Iconic cars
Rarities including a collection of Packards and a Lamborghini "supercar"…
Pre-sale
Lagerfeld by himself
Karl Lagerfeld died on February 19, 2019, leaving behind a legacy as an…