At L'Hermitage, near Pontoise, where he stayed from 1866 to 1868 and after the 1870 war, Camille Pissarro celebrated working the land, as witness this recently discovered painting, which now joins the corpus of the eldest Impressionist. 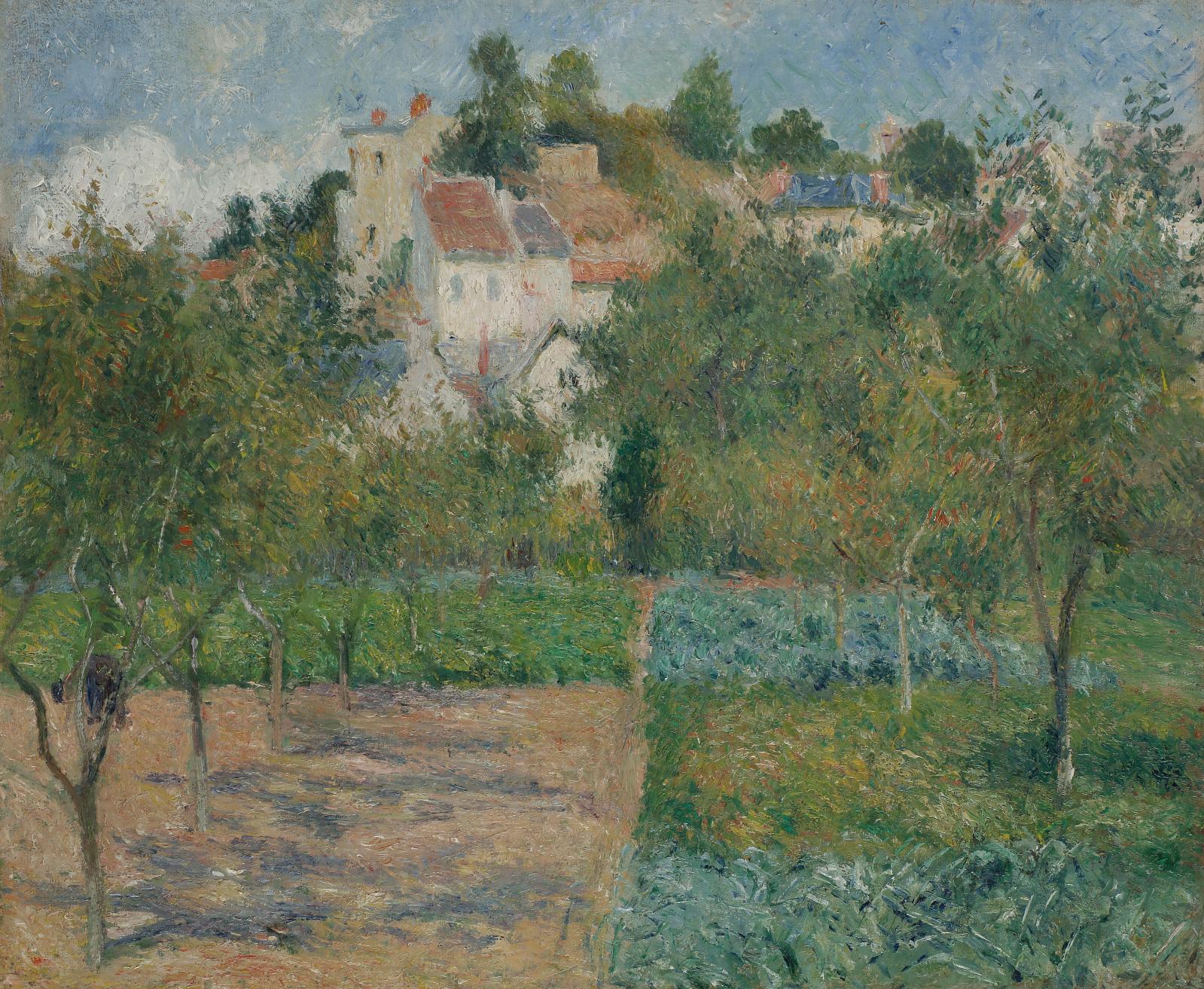 Since the catalogue raisonné of Camille Pissarro's paintings was published in 2005, fewer than ten have been added. This Jardin de Maubuisson , l'Hermitage à Pontoise is one of the happy few, and the only one with this subject. It all started a year and a half ago, when a customer brought the picture to the Ader auction house's Nicolas Nouvelet. Though unsigned and undated, it had been exhibited between 5 and 20 November 1929 at the Simonson gallery in Rue Caumartin, Paris under no. 52, with the title Le Potager, and was attributed to Jean-François Raffaëlli (1850-1924), who produced numerous paintings of humble folk in the Paris suburbs in a dark palette – in principle, a far cry from this light-filled painting. "When I saw the picture, I thought it must be by a major talent, particularly Pissarro, because it reminded me of Le Jardin potager à l'Hermitage, now in the Musée d'Orsay," says the expert. "The composition was tighter, but the viewpoint was the same. I was fascinated by the perfectly mastered technique and the series of extremely fine, superimposed micro-strokes, which created truly harmonious colouring." On the strength of this intuition, he turned to Christophe Duvivier, curator of the Tavet-Delacour and Camille-Pissarro museums in Pontoise. And Duvivier was categorical: this was definitely a Pissarro. Claire Durand-Ruel, co-author of the critical catalogue of the artist's paintings, was also approached, and suggested having it examined by the Pissarro committee in New York, because "the lack of a signature left a doubt." After various to-ings and fro-ings, its identification was finally confirmed.

Thousands of subtly applied strokes
To give relief to his paintings, Pissarro deliberately left an unpainted area around certain elements in a composition (trees and houses) to intensify the volumes. These contours left "in reserve" can easily be seen in X-rays. So this painting was given the once-over. In negative format, they appear like a dark outline around the painted forms. The auction house restorer removed a varnish that disfigured the painting. The result was striking, revealing thousands of dabs of subtly applied paint. Comparison with another unlocated painting proved decisive. This was the Le Jardin au grand soleil (Garden in Full Sunlight), signed and dated 1876, from the Lacroix collection, knocked down for FF2,800 (€11,000 at today's value) at the Hôtel Drouot on 12 April 1902 under Paul Chevallier's hammer, with Messrs Bernheim-Jeune as experts. This shows a line of green hillsides standing out against a blue sky with fleecy clouds, showing a figure and apple trees in a kitchen garden. Here "the dabs are quickly and thickly superimposed, very different from Paul Cézanne's flat strokes applied with a palette knife or flat brush," says Claire Durand-Ruel. The painting here is an appealing illustration of Pissarro's Impressionist period in terms of both composition and the care lavished on rendering the light, and is "one of the finest she has seen recently." Lastly, the almost invisible form of a peasant woman behind a tree evokes Pissarro's feeling for human beings and their communion with nature… 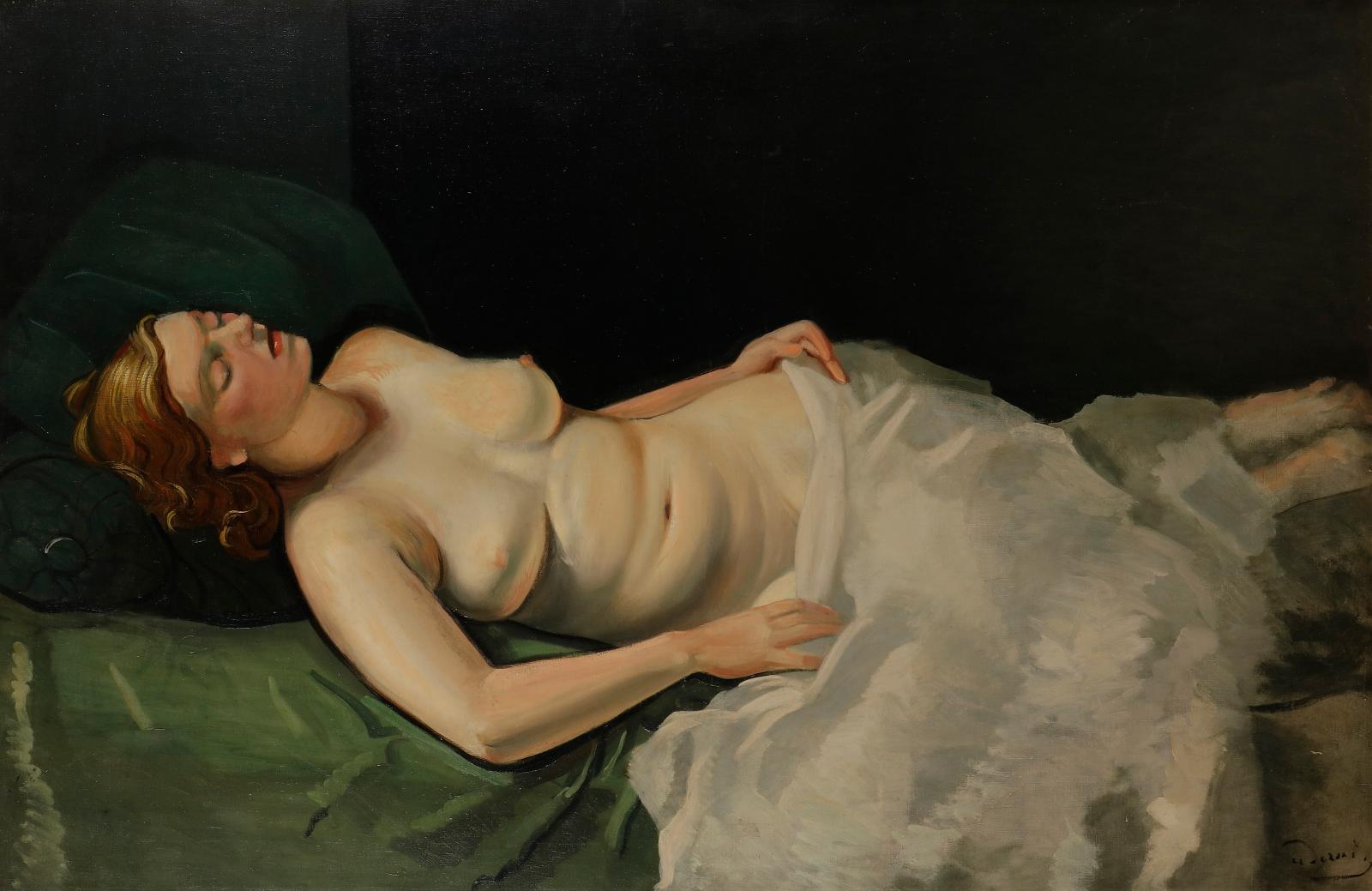 Through another painting by André Derain of a Seated Boy is also programmed in this sale of pictures (€12,000/15,000), this Reclining nude on a green divan will leave a lasting impression. Since its first exhibition at the Galerie Charpentier in 1955, the painting has constantly been shown from New York to Rio de Janeiro, and in the major cities of Japan and Europe. Here Derain takes up a theme in vogue since the Renaissance, and one explored by many artists. Like Édouard Manet with his Olympia, he adopts a dark background, against which the brightly-lit silhouette of his model stands out, emphasising the sculptural aspect, while the green of the couch sets off the sleeping beauty's colouring. This is highly varied. While life (though she is deeply asleep) is expressed in the pronounced pink of her face and her scarlet lips, the blood seems to have fled from her marble body. In the same way, the touch becomes less emphatic as it moves towards her feet, which are almost indistinct. The use of green to accentuate the nudity of his models is noticeable in several of Derain's works. In 1923, he depicted a young woman sitting before a green curtain in a painting now in the Centre Pompidou, and the colour also dominates the composition of a Nu au canapé (Nude on a sofa) of 1929-1930, now in the collections of the Musée de l’Orangerie.

Tableaux impressionnistes et modernes
Salle 6 - Drouot-Richelieu - 9, rue Drouot - 75009
Ader
Info and sales conditions
Catalogue
Salerooms
Results
Newsfeed
See all news
The artist residency Saint-Ange chooses its 2020 laureates
Luxembourg & Dayan and Venus Over Manhattan galleries join forces to open new space in the Hamptons
Guggenheim launches investigation into complaints of racism and mismanagement
Renaissance portraits together again after 125 years
Not to be missed
Pre-sale
Female subjects
Women are in the limelight at this modern art sale, where a carved…
Pre-sale
The boy king and the virtuoso engraver
The meeting between the young Louis XIV and the sculptor Jean Varin…
Pre-sale
Superb tapestries from the Tchaloyan collection
Over fifty pictures in wool and silk dating from the 15 th to the…
Pre-sale
The flames of love that recall Versailles
Created in the late 18 th century, or more probably even in the…