A Young Woman in the Sun by Renoir

At the height of his career, the Impressionist master made one of his most beautiful and vibrant paintings of women. A provenance punctuated by the 20th-century art market’s greatest names joins the omnipresence of his sensual model. 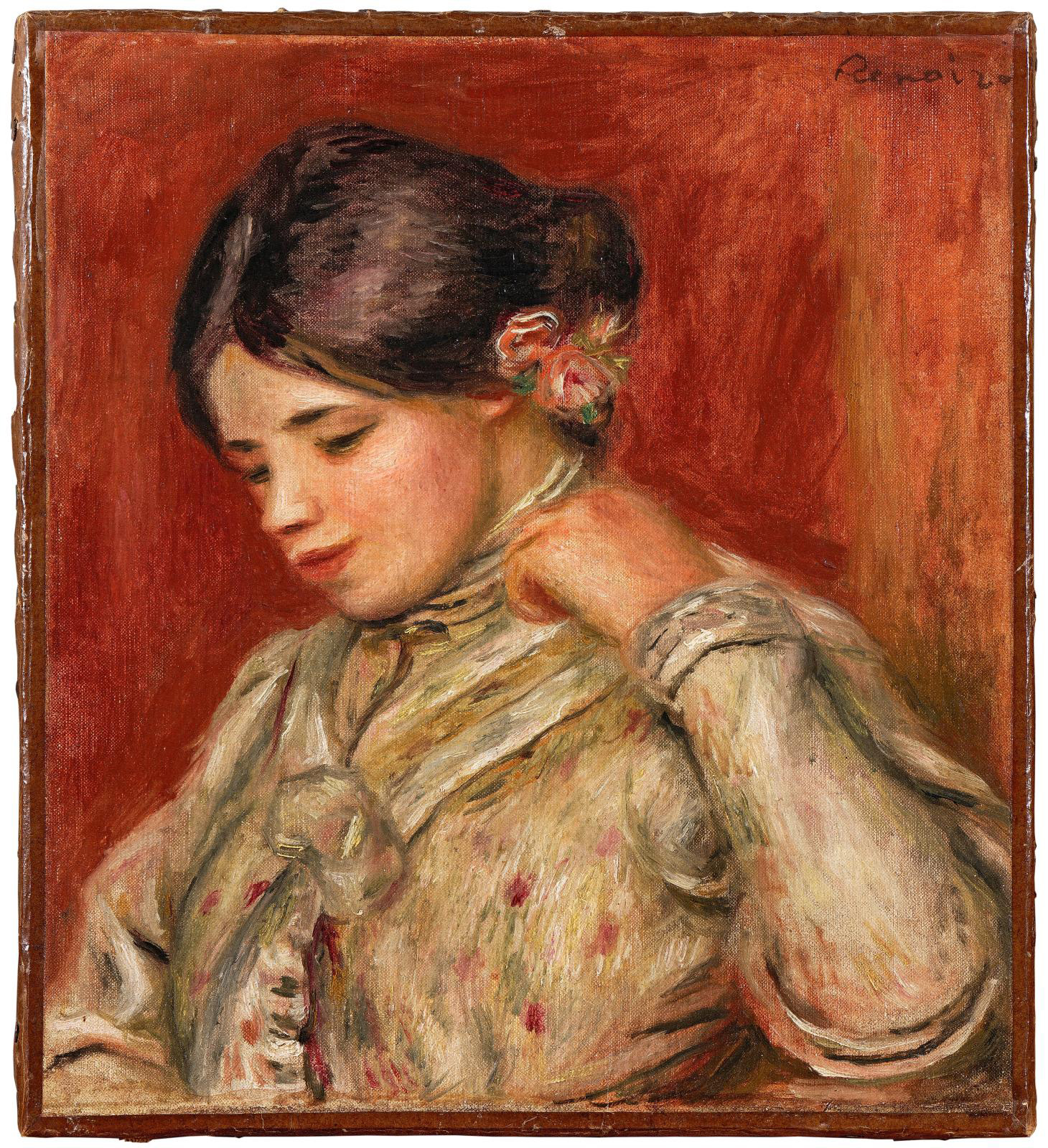 Auguste Renoir painted the many faces of women in countless portraits: the theme almost obsessively inspired his late masterpieces. Perhaps this was on account of his marriage on April 14, 1890, to his favorite model and companion, Aline Charigot, who officially became the mother of his children and appears in about 15 paintings, including three as a mother. Other muses came after her. All of them were the couple’s servants or nurses, such as Gabrielle Renard, Aline's distant cousin, hired in late 1894. Moments of grace stolen in the garden of Cagnes-sur-Mer or the house in Essoyes, in the Aube region, gave rise to several famous paintings, such as Gabrielle à la rose (Gabrielle with a Rose, Musée d'Orsay).

Tête de femme, fleur dans les cheveux (Young Woman, Flowers in Her Hair), a small work (33.5 x 30 cm/13.19 x 11.81 in), is in the same vein. Renoir painted a face in full bloom, with a fleshy mouth and round cheeks, rendering the flesh tones with his trademark white and pink strokes. Dressed in a floral bodice, the young woman stands out against a red background letting the relief of the canvas show through. But far from being a sketch, like some works of the same size and period, "this is a finished portrait, signed with Renoir’s full name, not just an initial," says Frédérick Chanoit.

The Itinerary of a Highly Coveted Work
Tête de femme boasts a brilliant provenance. "Besides its undeniable beauty,” says Mr. Chanoit, “it has the advantage of having belonged to prestigious owners and has a perfectly documented provenance." Bernheim-Jeune (one of Renoir's three exclusive dealers with Durand-Ruel and Ambroise Vollard) bought the work for 5,000 francs from the artist in his studio on March 17, 1911, before selling it to his Berlin colleague M. A. Fleischteim on April 10, 1912. Shortly afterward, Fleischteim returned it to Bernheim-Jeune as part of an exchange. In October 1912, the Paris gallerist sold the painting to Alphonse Kann, a great collector who was also an adviser to the Bernheims and Paul Guillaume. At an unknown date between 1917 and 1927, Adolphe Breynat (1877-1950) acquired the portrait, which joined his impressive collection of about a hundred old and modern paintings, including works by Pissarro, Monet, Corot and Boudin, all recorded in an acquisitions ledger. Breynat’s descendants have owned Tête de femme ever since. It appears as number 2316 in Guy and Patrice Dauberville's Renoir, Catalogue Raisonné published by Bernheim-Jeune in 1973. The painting will be featured in the new catalogue raisonné currently being prepared under the aegis of the Wildenstein Plattner Institute.

Tableaux impressionnistes et modernes
Marseille - 51, rue Alfred-Curtel - 13010
Marseille Enchères Provence
Info and sales conditions
Newsfeed
See all news
We will be on vacation from July 23rd - August 23rd. Wishing you a great summer and see you in September!
Santiago Caltrava Renovates San Gennaro Church in Naples
50% Funding Cuts for Arts and Design Courses Approved by UK Government
Instagram’s New “Sensitive Content” Controls Cause Concern Amongst Artists
Not to be missed
Pre-sale
Under the Protection of Maahes: A Rare Egyptian Bron…
This well-sized bronze statuette dating from Egypt’s Late Period…
Pre-sale
The Op Art of Vasarely and the Discourse of Descarte…
This painting by the master of optical art has never come up for…
Pre-sale
Lalanne and the Charging Rhinoceros
This bronze sculpture with an enamel patina, which is from a private…
Pre-sale
From the Abstraction of Viallat to the Silk Paintings…
Two worlds will come together in Nîmes: those of Vietnamese painter…