Cézanne in the open air 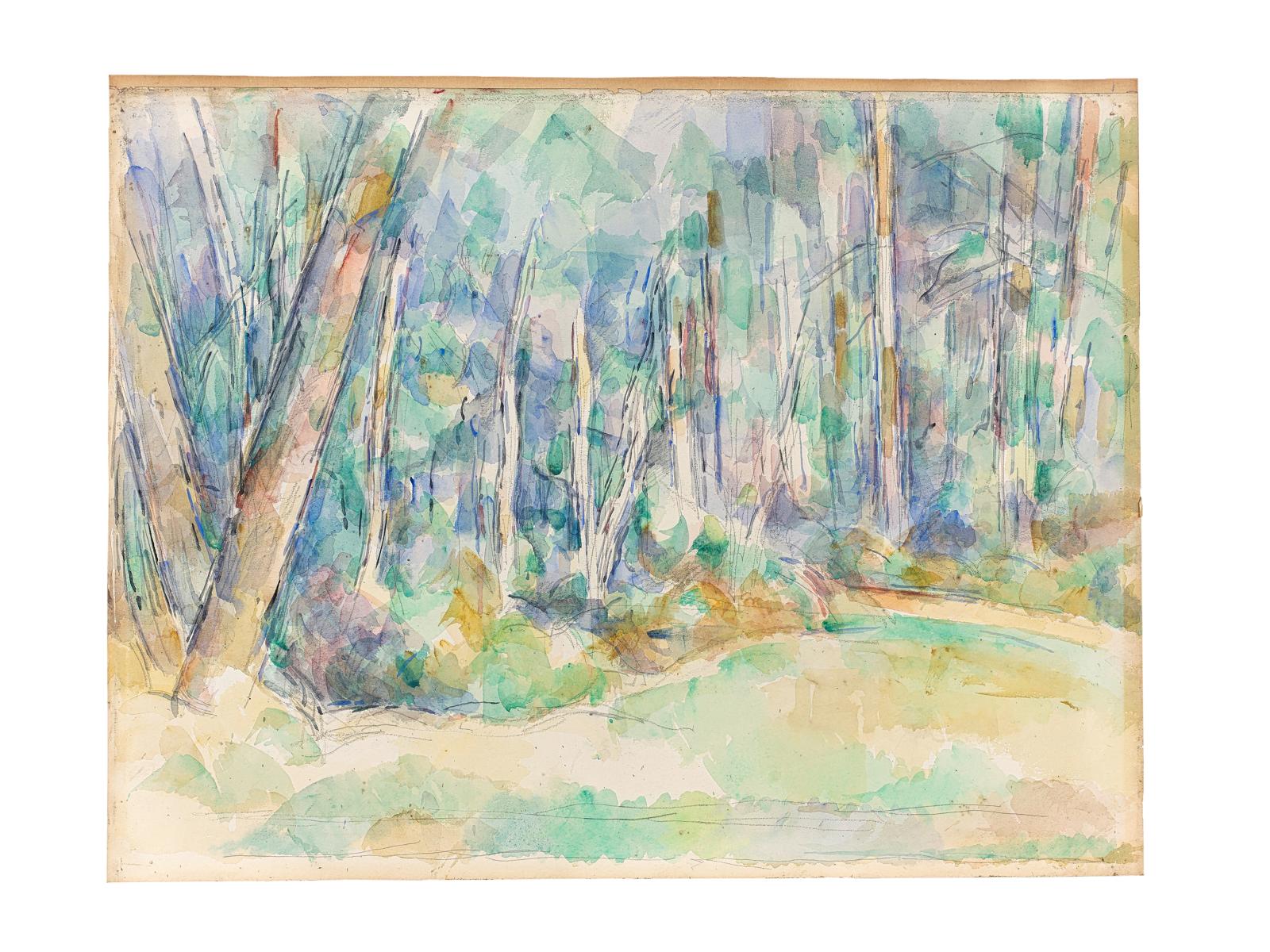 Paul Cézanne (1839-1906), "Intérieur de forêt", 1904-1906, watercolour and lead pencil, 45.5 x 60 cm.
Estimate: €500,000
Paul Cézanne (1839-1906), "Intérieur de forêt", 1904-1906, watercolour and lead pencil, 45.5 x 60 cm.
Estimate: €500,000
When Cézanne painted this watercolour between 1904 and 1906, he only had a few years to live. This was the period of the "Grandes Baigneuses" and long walks through the Provence region. In 1902, he set up his studio on the hill at Les Lauves, close to Aix, from which he looked out over the countryside. In this "Intérieur de forêt", the identifiable, solid elements of the forest, with the tree trunks and path in the foreground, were rapidly sketched in lead pencil. The colours, a mixture of mauve, green and blue, were openly added to this framework (or "configuration of the motif", to quote the painter) with a new fluidity and transparency. "An ethereal quality suddenly replaces the sombre, inflexible geometry. I see. In patches," as Cézanne said himself. Light spills out in white areas left in reserve; sky and vegetation blend in a single atmosphere where the air circulates freely. The sense of harmony and rhythm, the extreme lightness of the colours, as though washed by a storm (that of impending modernity?) and perhaps the humility typical of watercolours (a technique revived by Cézanne and others after its neglect during most of the 19th century), surely appealed to its former owner, Madame Pierre Reinach-Goujon. Julie (her first name) bought it in 1920 from Madame Cézanne. The daughter of a Jewish politician, Joseph Reinach, who was closely involved in the Dreyfus Affair, in 1905 she married a member of Parliament, Pierre Goujon, with whom she shared a passion for painting. He was killed in action in 1915. His portrait as a child was commissioned by his father, Étienne, from Auguste Renoir. At the time of the purchase, the Reinach-Goujon family owned one of the significant private Paris collections of the post-war period, which already contained some 300 works, including several Rembrandts, Degas and Van Goghs. This piece by Cézanne, which has been passed down through the family, has only appeared in public twice before – the last time in 1962. A quiet existence that has helped to preserve its incredible freshness.
tableaux du XIXe, provenant de l'ancienne collection de Mme Pierre Reinach-Goujon, Paris
Salle 5 - Drouot-Richelieu - 9, rue Drouot - 75009
Touati - Duffaud
Info and sales conditions
News feed
See all news
Pace to merge with Pace/MacGill Gallery to strengthen photography programme
Austrian artist Oswald Oberhuber dies at 88
Germany restitutes three works taken by Nazi regime to victim’s heirs
New York gallery Koenig & Clinton closes
Not to be missed
Pre-sale
In Brandenburg, indecision on religion
Struck in 1627 under George-William, elector of Brandenburg, this…
Pre-sale
The Renaissance, natural style
A bronze summons the sculptor Ponce Jacquiot to see the light again…
Pre-sale
Biron Collection: speech is silver
This collection was assembled over forty years by Louis and Renée…
Pre-sale
Henry IV's right-hand man
Coming from the estate of Baron Alain de Montgascon, this 17 th…