Marquayrol: a symphony of painting

For many years, Henri Martin looked for a house not too far from Toulouse, with fine views, surrounded by gardens and structures like this pergola for gazing at the countryside. 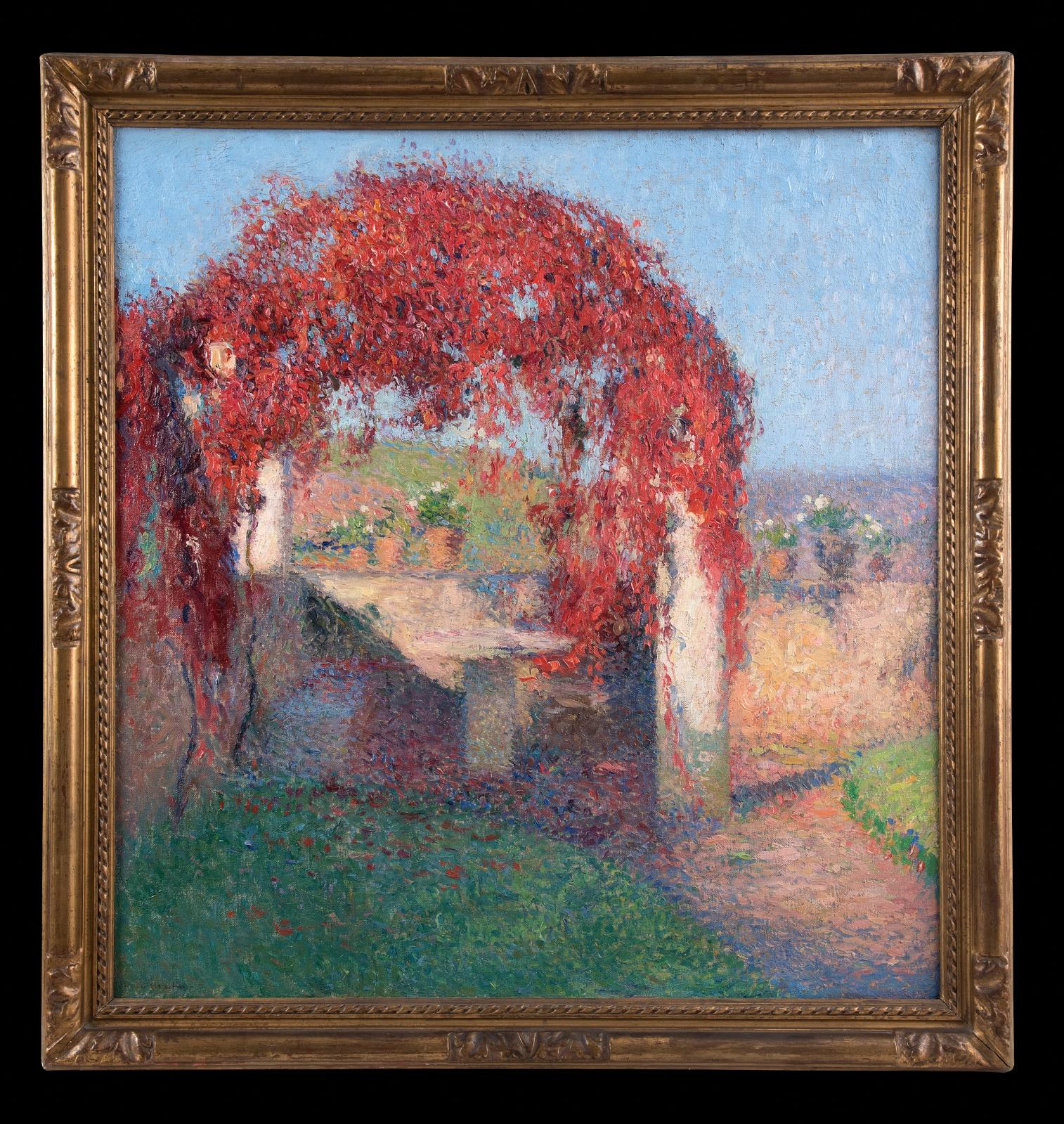 His friend the painter Henri Marre found him this house in the Lot region "perched on a fairly large hill". Marquayrol had everything to charm Henri Martin (1860-1943): a splendid house overlooking a fairly steep slope, a dovecot, a pond, a vine and a terrace with a pergola providing a touch of Tuscany, whose massive pillars were covered in a Virginia creeper that became aglow with crimson in the autumn. Everything was a subject; everything enchanted him. Martin and his family would stay from March to November, spending the years of the Great War there, and moving in for good in 1939. Here, like Cézanne with Mont Sainte-Victoire, he found complete artistic fulfilment and a personal style in symbiosis with his beloved landscape, in which he noted the "purple, tender greens and incredible blues". "After spending three months in the country in a tête-à-tête with nature," he told the critic of La Dépêche, Bernard Marcel, "the full light, now dazzling, now diffuse, softening the lines of figures and the landscape, forces me urgently to express it though pointillé and the division of colour." As witness this painting of around 1910, where the gaze travels through the arch of the pergola and falls on pots of flowers: white splashes punctuating the terrace guardrail. In the pleasant shade, we can just make out the silhouette of a child (perhaps the artist's son) sitting on a bench before a basin filled with water for the birds. The foreground in tones of blue and green dotted with purple emphasises the cool feel of the place, in contrast with the sun-drenched floor of the terrace, painted in a teeming mixture of yellows, orange, a little white and pink. The artist adopted Seurat's pointillism but added a more vermiculated, vibrant feel gleaned from the style of Giovanni Segantini (1858-1899), whom he met during a stay in Italy in 1885. The views of Marquayrol, particularly the pergola paintings, were all necessary stages on the journey towards his distinctive art.

Painted in Avenue du Bois-de-Boulogne in the mid-1950s, the picture contains all the codes that ensured the success of the most Parisian of Dutch artists. 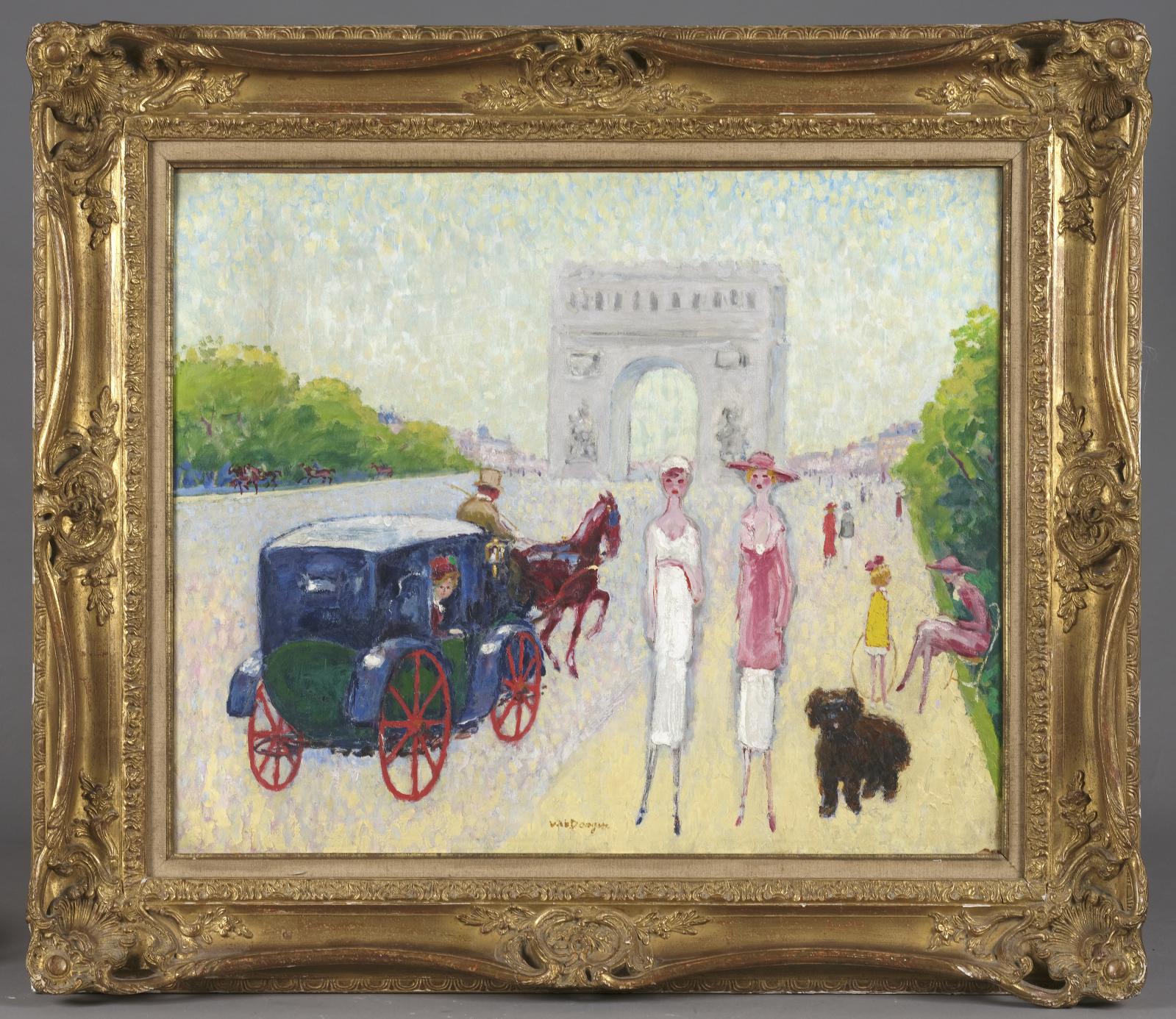 Many Dutch artists decided to move to France, including Jongkind, Mondrian and Van Gogh. But none of them except Kees Van Dongen took French citizenship. After the bohemian life of Montmartre and Montparnasse, and even a foray into anarchism, he wanted to become an established painter. The man Picasso dubbed the "Kropotkin of the Bateau-Lavoir", reflecting his unshakeable desire for independence, finally toed the line, in a way, probably to participate in a key event: the highly official Salon de la Société Nationale des Beaux-arts, which only admitted French artists and was a major source of State commissions for the no less official Musée du Luxembourg. Women lay behind this transformation… They were to be the subjects of his portraits, with a touch of the Fauve, like a concession to the Van Dongen of an earlier time. Their instantly recognisable elegance characterised most of the painter's works in the "cocktail" years of his later life. He certainly excelled in these stylised portraits of celebrities and anonymous models, brilliantly drawn with slender figures and shingled hair, eyes outlined in kohl, nonchalantly smoking. His immediate triumph enabled him to move in 1922 to a private mansion near Place Wagram, where he treated himself to the luxury of a room to exhibit his works. Thirty years on, we find two of these elegant women seemingly rooted to the spot in the middle of Avenue du Bois-de-Boulogne, fixing the painter with a smouldering look women's magazines would now describe as "smoky", dressed in light, pale outfits.