Géricault in the lions' den

Almost instantly recognisable, this group of lions bears the stamp of Théodore Géricault. These big cats were one of his favourite subjects, along with horses. 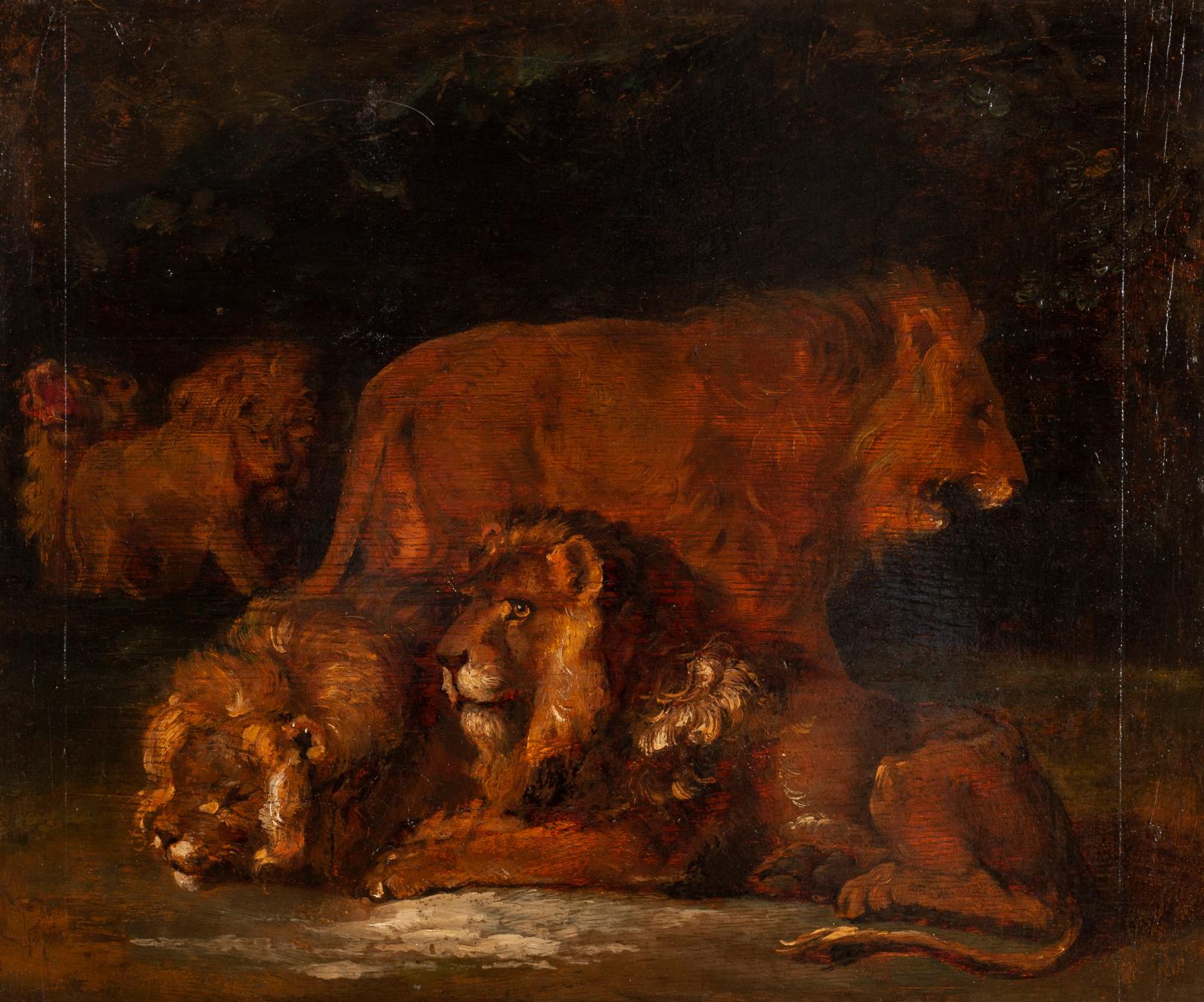 With horses being attacked or eaten by lions, lions lying down, lions roaring, lion's heads, portraits of lionesses and lion hunts, alone or in groups, at rest or in action, the large feline clearly fascinated the Rouen artist. What all these depictions have in common is their naturalistic aspect, as the beasts were sketched from life, like snapshots. The panel here is a fine illustration featuring five lions, two lying down, in postures reminiscent of compositions by his contemporary and friend, Eugène Delacroix. Both artists were also inspired by the works of Peter Paul Rubens. The models for the animals here can probably be found in the large painting by Rubens of ca. 1615, Daniel in the Lions' Den, now in the Washington National Gallery of Art; they were also based on the residents of the Brussels Royal Menagerie and Paris Botanic Garden. Géricault painted directly onto the panel without preparing it, leaving the veins in the wood visible, and used ground pigments mixed with resin to enhance the play on light and transparency in the background. Apparently, the thick panel was originally painted on both sides, the other part being a study of the cured leopard skin on the saddle of An Officer of the Imperial Horse Guards Charging, now in the Musée du Louvre. The painting here once belonged to the collections of Comte Jean d'Harcourt and the actor Alain Delon.

Prestige Wind
Salle 16 - Drouot-Richelieu - 9, rue Drouot - 75009
Paris Enchères - Collin du Bocage
Info and sales conditions
Catalogue
Salerooms
Results
Newsfeed
See all news
The Eva Hober gallery closes for good
The French budget dedicated to culture will increase by 4.8% in 2021.
Arrests in the robbery and vandalism of the Church of Sant’Agata a Collegio in Sicily
Thyssen-Bornemisza Art Contemporary (TBA21) launches online platform: st_age
Not to be missed
Pre-sale
Hector Guimard: the essence of Art Nouveau
Though no introduction is needed for Hector Guimard, architect of…
Pre-sale
A painting by Jean-Léon Gérôme from the Moreau-Nélaton…
Last seen in 1900, this landscape of Paestum with a remarkable pedigree…
Pre-sale
An unpublished and mysterious envoi by Stendhal
This copy of Le Rouge et le Noir ( The Red and the Bl ack) is an…
Pre-sale
Master cabinetmaker Charles Topino’s trademark
The furniture-maker’s signature pieces included small Transition-style…