The prestige of the Ancien Régime

Spotlight on the 18th century with furniture, goldwork and sculpture, including this alabaster bust of Henri IV, immortalised by the Rosset workshop. 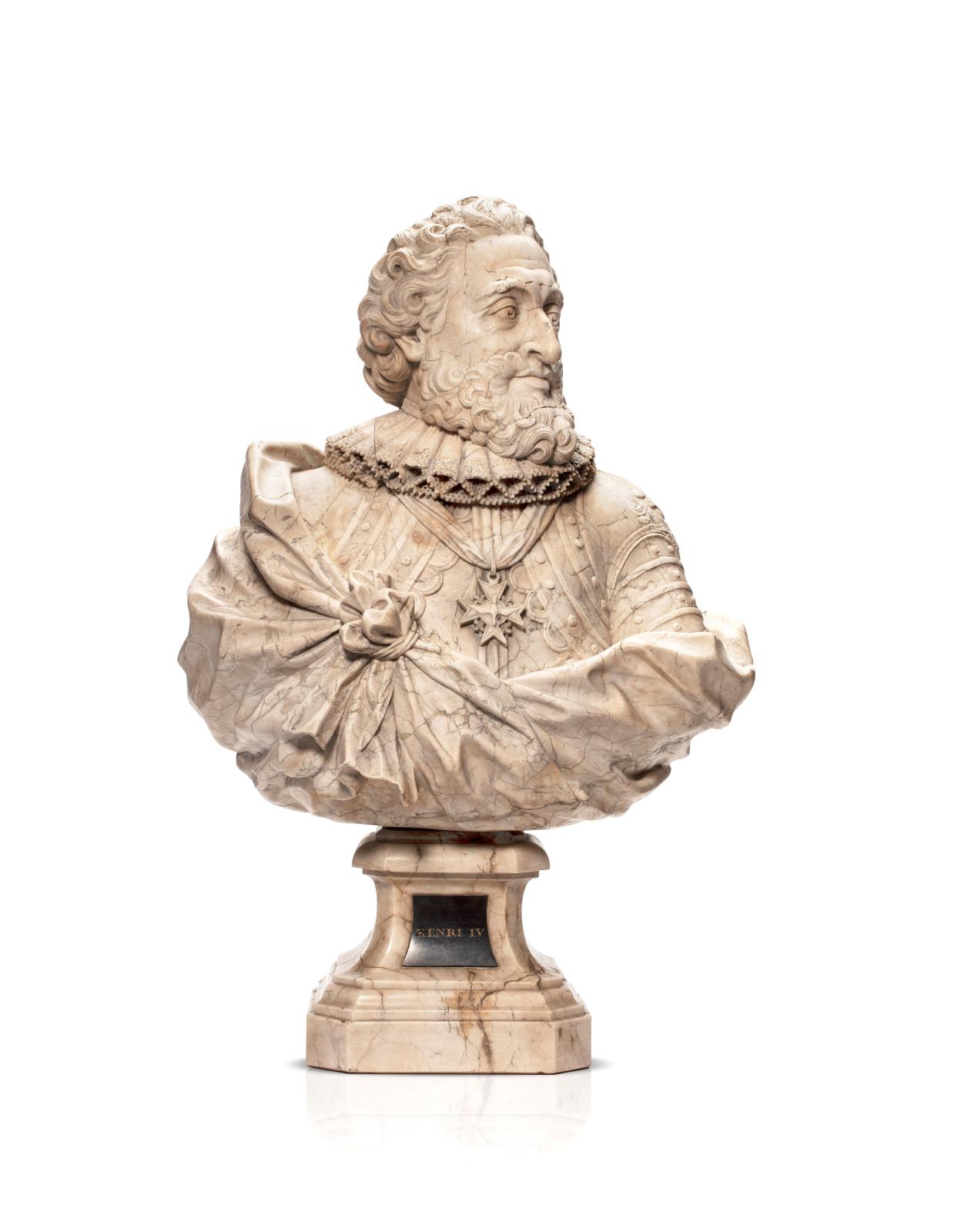 Born in the Jura to a family of sculptors who dealt in only small-scale pieces, Jean-François-Joseph Rosset made his name with busts of Voltaire, who became his friend. He was very probably the creator of this portrait of Henri IV, remarkable for its size at a time when Bourbon propaganda fostered the distribution of small effigies of the sovereign. Virtuosity is also evident in the refined chasing on a 1727 gold snuffbox by Louis Métayer, which carries the stamps of Amsterdam City and the goldsmith Jean Saint (€20,000/30,000). It shows the god Pan surrounded by shepherds. Like him, satyrs had been a popular theme since Antiquity, and were even used as decorative elements in furniture. Harking back to the splendour of the Ancien Régime, four of these half-men, half-goats were produced in gilt bronze during the 19th century to embellish two Louis XIV show cabinets belonging to the Pomereu d'Aligre family. They were later removed from the furniture and used as supports for a green marble top dating from the reign of the Sun King. The appealing decorative effect of this low table (€15,000/20,000) impressed Hubert de Givenchy, who had a copy made. Lastly, four chairs that belonged to the same family have two particular points of interest: their octagonal straight backs and the twisted fluting of their tapered legs, typical of the cabinetmaker Sulpice Brizard.

PRESTIGE SALE : FURNITURE & OBJECTS OF ART
Neuilly-sur-Seine - Hôtel des ventes, 164 bis, avenue Charles-de-Gaulle - 92200
Aguttes
Info and sales conditions
Catalogue
Results
News feed
See all news
New dates for the 35th Hyères Festival, in the South of France
Baltimore Museum of Art seeks to help the local arts community with $100,000 budget reallocation
Ancient Roman mosaic floor unearthed near Verona, Italy
The X museum slated to open this weekend in Beijing
Not to be missed
Pre-sale
From Carmontelle to the Val d’Osne
Initially planned for Sunday 29 march, this sale will be offering…
Pre-sale
As hours go by
Attributed to the Master of Luçon, this Book of Hours from the Beauvillain…
Pre-sale
By VCA
The beauty of natural stones by Van Cleef & Arpels in a set from…
Pre-sale
The Janine Saladin Collection
Around ten pieces of jewellery by Suzanne Belperron owned by a trailblazer,…