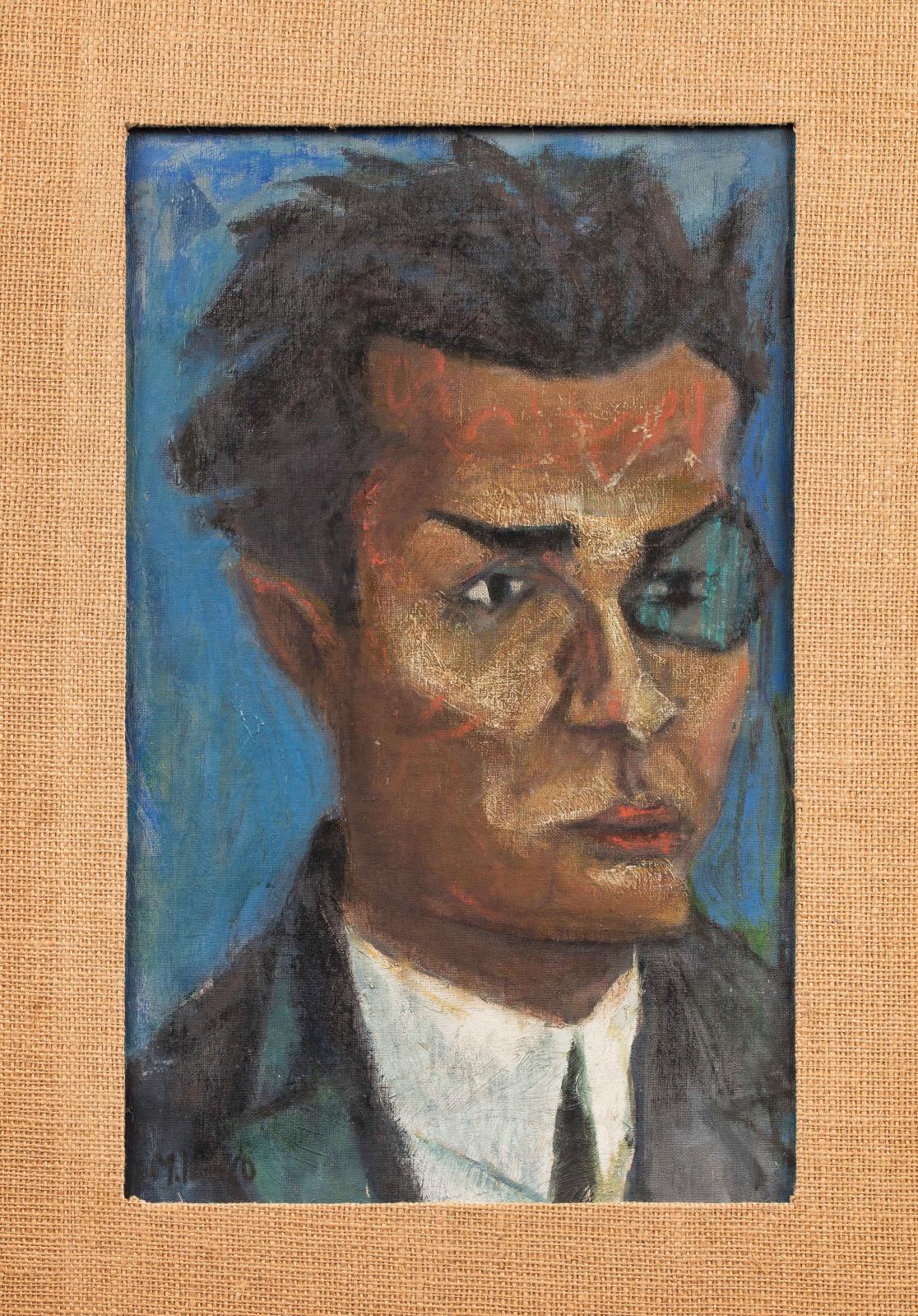 Reading the names in the catalogue – Piet Mondrian, Mikhail Larionov, Marcel Janco, Wolfgang Paalen, Enrico Prampolini, and André Kertész, with the only photographic lot – you could say that many of the key avant-gardes of the first half of the 20th century have turned up for this sale. Only an extraordinary personality could have brought them together: the polymorphic figure of Michel Seuphor (1901-1999). As we know, he equally juggled between his two passions: the exploration of highly innovative visual expression, and ardent writing. This group of works, taken from his personal collection, had remained in his estate. Consisting of paintings, drawings, prints and photographs, it retraces the long life and fascinating encounters of a creator who was simultaneously art critic, poet, theorist and an artist himself.

A go-between in art
The story started in 1921 in Antwerp, his native city, when the Belgian poet founded the literary and humanist review "Het Overzicht" ("The Overview"). The young Fernand-Louis Berckelaers had already chosen a pseudonym, as was common in the artistic milieu of the time: "Seuphor", an anagram of Orpheus, the mythical poet of antiquity who charmed animals, trees and rocks alike with his lyre. In 1925, Seuphor moved to Paris. In the Montparnasse district, he found all the leading lights of the international avant-garde: Pablo Picasso, Moholy-Nagy, Constantin Brancusi, Enrico Prampolini and the couples formed by Jean Arp and Sophie Taeuber, and Robert and Sonia Delaunay. The most fascinating of them turned out to be the unobtrusive Mondrian, whom he already knew, and who became a close friend. Much later, in 1956, he wrote the first monograph devoted to the Dutch artist. In 1929, fired by this seething creativity, Seuphor and the painter Joaquín Torres Garcia started a group of artists called "Cercle et carré" and an homonymous review, mobilising the partisans of burgeoning abstraction. A go-between in art, Michel Seuphor was an artist himself. Although early on, in around 1930, he adopted a "neoplastic" line, he gradually developed a more personal vocabulary which found its full expression after 1950 in his famous "lacuna drawings" with their broken horizontal lines.

A broad overview of the abstract movement
As the supporter of many exponents of abstraction, in 1920 he began to assemble a collection highly representative of the movement. But the selection proposed by Leclere is unusual in that it consists almost entirely of gifts from his friends. One speaking example is the "Portrait of Tristan Tzara" by his compatriot Marcel Janco, c. 1915-1916. Given to Seuphor by the painter after 1967, it shows the Romanian-born poet exactly when he was involved in founding the Dada movement in Zürich. This historic piece could well be the star of the sale (€30,000/50,000). Just as early, illustrating the bubbling artistic period just prior to the First World War, is another portrait: that of Guillaume Apollinaire. Sketched in pencil by Larionov in around 1914, the year the Russian painter moved to Paris, and later given to Seuphor, this drawing has an estimate of €6,000/8,000. Only a small selection of works by Seuphor himself will feature, as many of his drawings were already sold by Artcurial in May 2011. However, there is a noteworthy ink drawing from 1953, "Nouvelle Zénible" (estimate: around €500). The collection has another impressive section: Michel Seuphor's pictures by Kertész – a group of 17 original silver salt print photographs given to the critic by André Kertész himself, in particular to illustrate his reference monograph on Piet Mondrian, published in 1956. These fall into two groups, accounting for the variations in estimate: the original gelatin silver prints from around 1926, and the later prints dating from the 1950s. Some of them, taken by the Hungarian photographer during the summer of 1926, were the result of a photo session that became a legend. That day, Seuphor asked Kertész to follow him to Piet Mondrian's house to take a few pictures. Above all, they included this triple portrait entitled "In Piet Mondrian's studio – Piet Mondrian, Enrico Prampolini and Michel Seuphor". "This is a very rare print," says the expert Paul Benarroche, "and what's more, in a postcard format belonging to a very small series." Consequently, he has placed it at the top of the photographic lots with an estimate of €10,000/15,000. And where is Mondrian in all this? The tutelary figure of the sale will be represented by a portfolio of twelve plates published by the Denise René gallery in 1957, and numbered 110 out of 300. It will cost between €6,000 and €8,000.