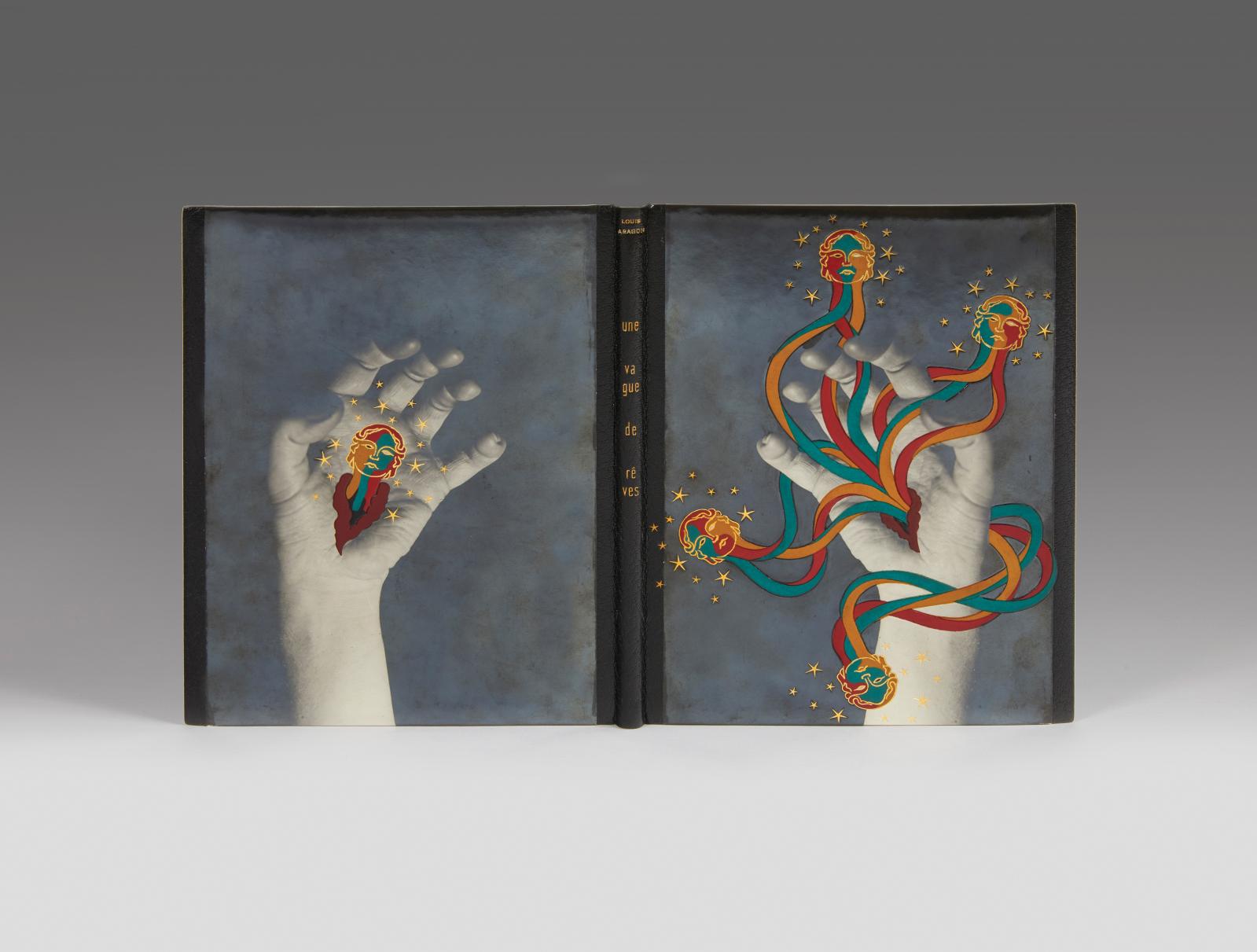 From cupped mains emerges first a head, then an eruption of coils that join to form a face haloed with stars: a sublimation of the painful process of giving birth. The binding created by Paul Bonet makes poetic allusion to the lyrical text by Aragon. These thirty-odd pages make up the first Surrealism manifesto, published some time before André Breton's more dogmatic, structured version. They invite the reader to "other relationships than reality that can be grasped by the mind and are basic as well, like chance, illusion, fantasy or dreams. These various types are united and reconciled in a genre: Surreality." In a few words, Aragon encapsulated the movement he helped to found. The adjective "Surrealist" first appeared in 1919. Four years later, Aragon felt the term should be clearly asserted, saying "The meaning of the word needs to be established. The task falls to me." Attacked by the Dadaists (with whom they had shared a path for a while), the Surrealists were themselves prey to existential ponderings. Breton abandoned writing; Éluard mysteriously disappeared; Aragon was sidelined because of his journalistic and literary activities. He wrote novels, a genre Breton despised and rejected: only the roman noir and a few fantasy novel writers like Pierre Mac Orlan found favour in his eyes. As a pioneer, Aragon expressed his commitment to the Surrealist movement through this "manifesto". He described its birth, paying tribute to writers and artists like Saint-Pol-Roux, Raymond Roussel, Saint-John Perse, Picasso and De Chirico as "presidents of the Republic of Dreams. And now the dreamers": friends like Éluard, Soupault and Man Ray – all those for whom "freedom, that magnificent word, has reached the point where it takes on true meaning for the first time: freedom begins where the marvellous is born." Words that inspired Paul Bonet to create this fantastic binding…

The Kahn library: Dada-Surrealist and more…

Geneviève and Jean-Paul Kahn sought out predecessors and heirs to the Dada and Surrealist movements through not only their works but also little mementoes – luminous traces left by these dynamiters of thinking. 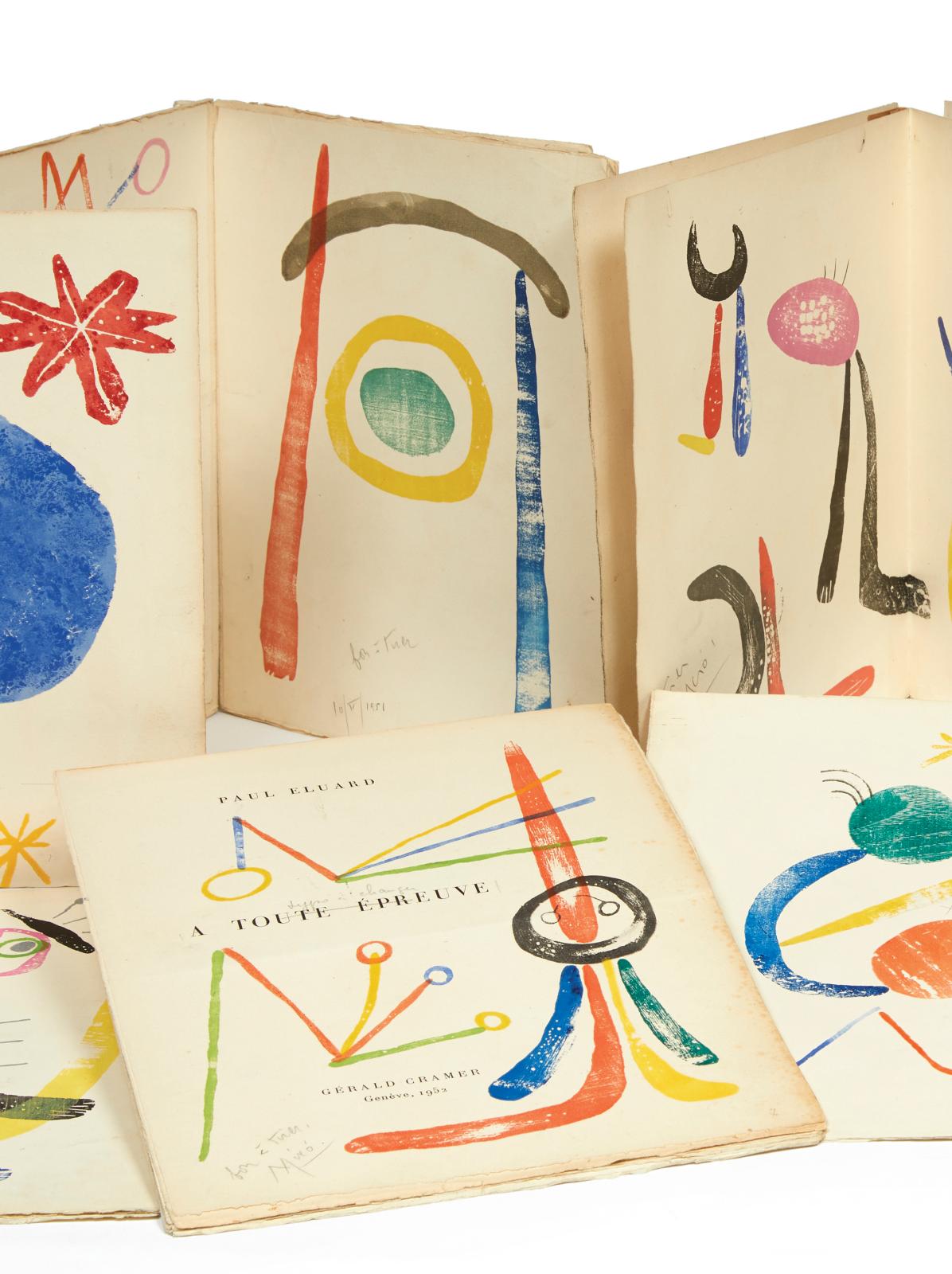 These books, drawings and ephemera, all lovingly hunted out, will soon be dispersed: a decision taken by Geneviève Kahn in line with her husband's wishes. While Jean-Paul Kahn (1931-2018) bought little at public auction, he attended key sales involving Sicklès, Gaffé and, naturally, André Breton (at Drouot in 2003). His library reflects his liking for objects, the piece left behind that gives another meaning to a book – preferably one in soft covers. This is the case with the first French edition of James Joyce's monumental Ulysses (ca. €8,000), which comes with a postcard in the author's hand, and the subscription form and menu for the "Ulysses" lunch on Thursday 27 June 1929 intended for the copies in Holland paper print run distributed that day. This is signed by thirteen of the participants, including James Joyce, Paul Valéry, Philippe Soupault, Adrienne Monnier and Sylvia Beach.
As a teenager, Jean-Paul Kahn was already interested in art – not only the great Old Masters and modern artists, but also more intriguing works –thanks to his aunt Suzanne, who worked at the Louvre before the Second World War and was appointed assistant curator at the Petit Palais, Paris, in 1946. Kahn discovered Dada, then the Surrealists. In Anthologie de l’humour noir (Anthology of Black Humour), struck by the coincidental use by Baudelaire and Rimbaud of the words "emanation" and "explosion", Breton evoked "the same preoccupation with the so to speak atmospheric conditions that foster the mysterious, delightful exchange of humour between people." Jean-Paul Kahn assembled the Dossier préparatoire de l'Anthologie de l'humour noir, the preparatory dossier for this work: a collection of handwritten and typed notes (1935-1937) making their auction debut, valued at around €30,000, and a soft-cover copy (no. 3) of a first edition of this book (€20,000).

Surrealist forerunners and fellow travellers
In this book, which was not published until 1940 and took a few more years to achieve success with the public, Breton presents portraits of celebrated forerunners like Sade, and little-known ones (Forneret, Borel, Nouveau), together with fellow travellers including Vaché, Apollinaire and Duchamp. He also acclaims painters such as Picasso and Dalí. All of them are represented in the Kahn library, as is the Côte-de-Beaune vineyard owner Xavier Forneret (1809-1884), representing the "frenetic" movement of French Romanticism, considered by Breton a forerunner of automatic writing and a master of black humour. This "man in black" played the violin at night and slept in an ebony coffin: the kind of humour that enchanted the Surrealists. Éluard's copy of the first edition of his Rien. Au profit des pauvres (Nothing. On behalf of the poor) (Dijon, January 1836, small in-8° volume), bound in brown long-grain half-morocco and still with the cover decorated by Georges Hugnet, is expected to make €2,000. What stands out about this book is disconcerting typography, the large amount of blank space and his prose poems (he was one of the very first to produce any).
In 1919, Breton and Soupault wrote Champs magnétiques (The Magnetic Fields), Surrealism's birth certificate. Its two-handed autograph manuscript is contained in an astonishing box made by Jean Benoit in the early 1970s (€100,000/150,000). The movement was based on the principles laid down in the manifestos published in 1924. Breton's, the best-known, appears here alongside Aragon's Une Vague de rêves (A Wave of Dreams). Jean-Paul Kahn owned a copy in a 1938 photographic binding by Paul Bonet (€40,000/50,000).

Friends: Mesens, Penrose, Genet
Another founder member of Surrealism, Paul Éluard, is represented by writings like À toute épreuve in a first edition of 1930 and a 1958 copy including woodcuts by Miró: one of the 20th-century’s most beautiful illustrated books (€150,000/200,000). The poet also acted as a go-between, forming friendly relationships with a number of writers in International Surrealism. Jean-Paul Kahn was particularly interested in the Belgian and English schools, collecting letters by writers ranging from Breton to Magritte, and works by Pansaers, Mesens, Shelley, Wilde, Penrose (with whom he developed a friendship) and the lesser-known Stephen Spender. He also appreciated the disruptive, ground-breaking writing of Céline and Genet and hailed the appearance of Pop art during its earliest years in New York, where he then lived, attending Andy Warhol's exhibitions. In a single book published in 1964 and distributed by the Bern publisher E.W. Kornfeld, Walasse Ting's One Cent Life evokes the creative explosion spawned by Surrealism and successfully reconciles the two artistic poles of the time, New York and Paris. Twenty-eight artists and ten nationalities are represented. The American Sam Francis called on his CoBrA group and Pop art friends to share the cost with the Chinese-born Walasse Ting. This copy, just as it was published with its original wooden box, brings the first part of the sale to an end. Its character as a complete work of art reflected Jean-Paul Kahn's impassioned quest for 20th-century works that would disrupt society's awareness, vision and mores for a long time to come.