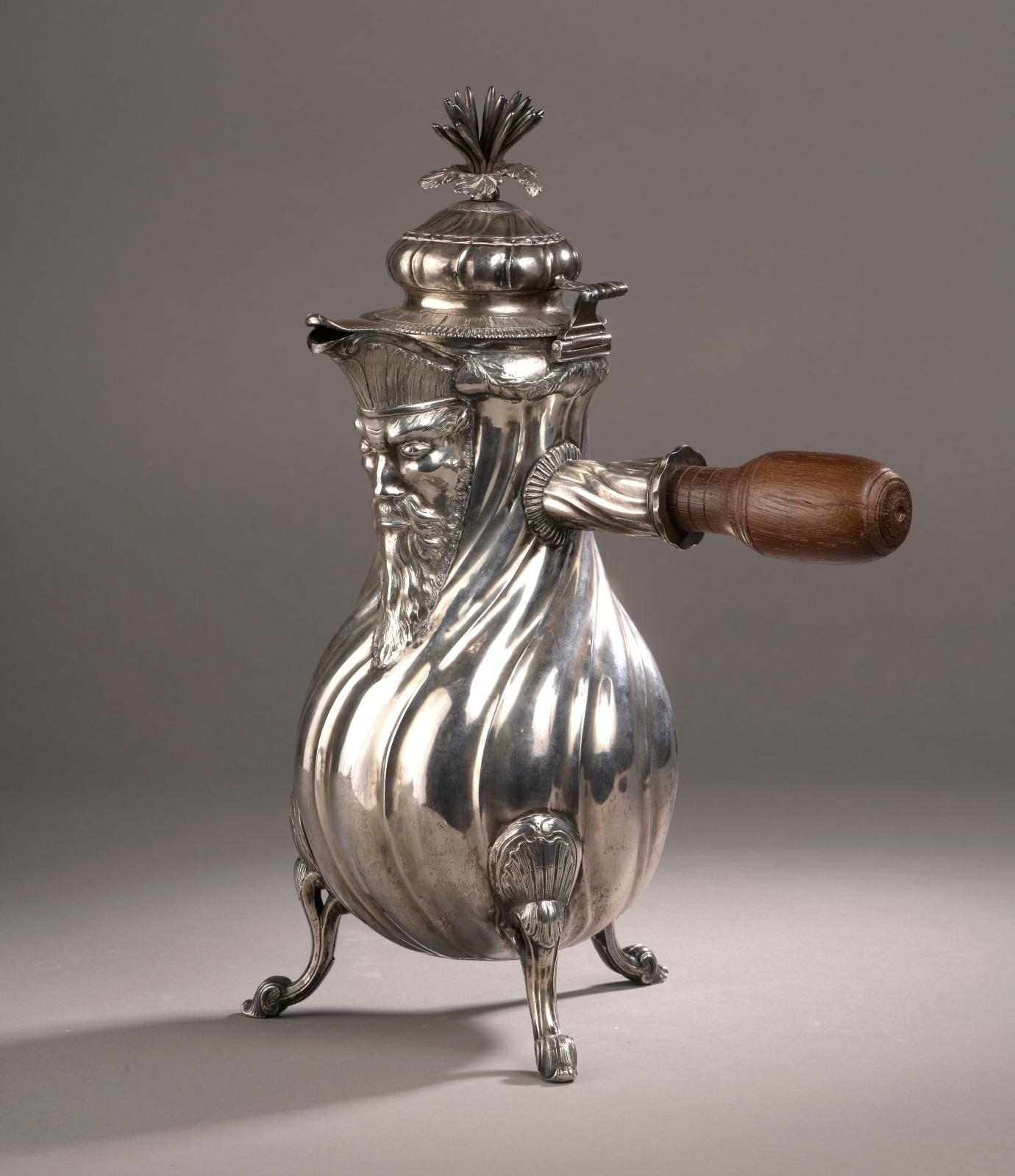 Eighty lots that once belonged to Achille Fontaine are leaving his family home in Saint-Omer, where they were housed until now. This manager of a cotton mill in northern France had an almost uncontrollable passion for objets d'art. A Bohemian spendthrift by nature (“I hoard our money when we travel, I use our poor silver sparingly, and you just scatter it about,” his wife Augustine would quietly lament), he was always roaming the art galleries. He even went to Italy and bought the Cernuschi collection for 100,000 francs, chartering a whole train to take it back to Lille before selling it off piece by piece for a pittance.

Venetian Madonna
Today, his pieces are being sold by his heirs. They include this white marble “Madonna and Child”, whose very simple composition shows two figures from the waist up behind a parapet, emerging from a flat background. The eye focuses entirely on the Madonna and Christ Child, their gestures and emotions. This private devotional piece, designed to move its owner and encourage the worship of Mary and Christ, was made by the studio of Antonio Rizzo (1430-1499). Though born in Verona, the architect made his career in Venice, and was strongly influenced by Lombard sculpture and its naturalism (see interview). Intended for a select circle of collectors – unobtrusive, learned connoisseurs of the Renaissance mostly from the English-speaking world –, this extremely graphic depiction would sit well beside contemporary works.

The influence of Flemish painting
Other major pieces in the sale include "La Raison du plus fort (Deux chiens se disputant des entrailles)” (“Might is Right") by Jan Baptist Weenix and "La joyeuse compagnie attablée", a work by the French School from around 1640. Valued at €15,000/20,000, this vivacious painting betrays the influence of Flemish painting, itself influenced by Caravaggio. The work by Weenix illustrates the importance of hunting in those days. Though the two dogs fighting over entrails make a rather off-putting subject, the painting is remarkable for its technically accomplished glazed browns and grandly decorative effect. “Deemed shocking around twenty years ago, the composition is so lavish, so vigorous that one completely forgets the chunks of meat, despite their prominence,” says an enthusiastic Stéphane Pinta from the Cabinet Éric Turquin. Another scene with a ruddy-faced Bacchus and satyr (€6,000/8,000) and a depiction of “Saint Paul” with the irresistibly bold touch of the Rubens school remind us of Achille Fontaine’s penchant for Northern European painting. Some may prefer, in very different genres, a study by Jules Breton for "Le pardon de Kergoat” (€8,000/10,000), a pair of Empire chased gilt bronze candelabra with shafts formed of young Nubians in loincloths (€10,000/12,000), or a Mazarin desk in Boulle marquetry (€10,000/12,000).

"I love beautiful things"
During the early years of the 20th century, Achille Fontaine partnered up with a manufacturer from Armentières – who would shortly enjoy full ownership of the company – and made some disastrous investments. On 10 June 1904, his collection of Old Master and modern paintings was sold under Maître Lair-Dubreuil's hammer at the Georges Petit gallery in Paris. It contained a hundred-odd works by artists including Bruegel the Elder, Anthony Van Dyck, Peter-Paul Rubens, Hans Holbein the Younger, Jacob Jordaens and Philips Wouwerman. The man had “more taste than business sense,” says Bénédicte Saint-Sevin, one of his descendants. Placed under supervision a few years later, Fontaine nonetheless kept in touch with the art scene. He died on 2 May 1912 in a Paris boarding house the day after an evening at the Théâtre de l'Odéon with his friend, the painter Georges Maroniez. As he was admiring the full moon over the Seine from his carriage, he suggested that his friend make a painting of it. Incorrigible to the last…

Where does Antonio Rizzo stand in Renaissance Venetian sculpture?
He was one of the leading artists in the Venice region and knew masters like Bellini and Antonello da Messina. But he left more of a mark as an architect. He partly designed the Giants’ Staircase in the Doge’s Palace as well as the Foscari Arch: two monuments to the glory of the Venetian Republic! He was strongly influenced by Lombard sculpture, which dominated Northern Italy during the second half of the 15th century, and by Donatello. This “Madonna and Child” is a fine example of this, with its subtle relief, its palpable emotion, the subjects' gentle expressions and its naturalism – the double chin, the heavy eyelids, the child’s dimples.

So why did he fall into obscurity so quickly after his death?
Venetian sculpture remains less famous than the painting of the region. Titian, Tintoretto, Veronese and Tiepolo all overshadowed the sculptors. Additionally, Antonio Rizzo was part of a generation that was quickly replaced by 16th century sculptors like Jacopo Sansovino and Alessandro Vittoria, whose highly sensual, harmonious figures are maybe more in keeping with our idea of the Renaissance in Venice. Rizzo and his contemporaries were considered old-fashioned by the 1530s. They were rediscovered only in the 19th century, or even in the last thirty or forty years, in Rizzo’s case. This renewed interest can be seen in the increasing number of publications on Venetian Renaissance sculpture in general.

What was the purpose of bas-reliefs such as this one?
Judging by its subject and size, it must have been a piece for private devotion designed for someone important, as suggested by the use of gold-highlighted marble to accentuate the precious quality (although it is barely visible today) and its ostentatious frame.
livres, étoffes anciennes, tableaux anciens, céramiques, argenterie, objets d'art et d'ameublement, provenant de la collection Achille Fontaine (1836-1912)
Salle 5-6 - Drouot-Richelieu - 9, rue Drouot - 75009
Daguerre
Info and sales conditions
Catalogue
Salerooms
Results
News feed
See all news
Death of David C. Driskell, a pioneer in African American art history, aged 88
Hauser & Wirth launches a donation fund: #artforbetter
Moscow’s Garage Museum of Contemporary Art's digital platform is much more than a museum online
The Museum of the Bible’s boards chairman will return 11,500 antiquities to the Middle east
Not to be missed
Pre-sale
Boy with a dog
This presumed portrait of Napoleon Bonaparte's great-great-nephew…
Pre-sale
Engraved treasures from the Marcel Lecomte collectio…
The sale at Drouot of a collection assembled by this leading Parisian…
Pre-sale
Roses, roses all the way…
Although unsigned, this Art Deco pendant combining precious and…
Pre-sale
With bare hands
This Nude with crossed hands is one of the very few carved wood…