The flames of love that recall Versailles

Created in the late 18th century, or more probably even in the following one, this lead fountain featuring "Cupid Pulling His Bow" is based on a model at the Chateau of Versailles. 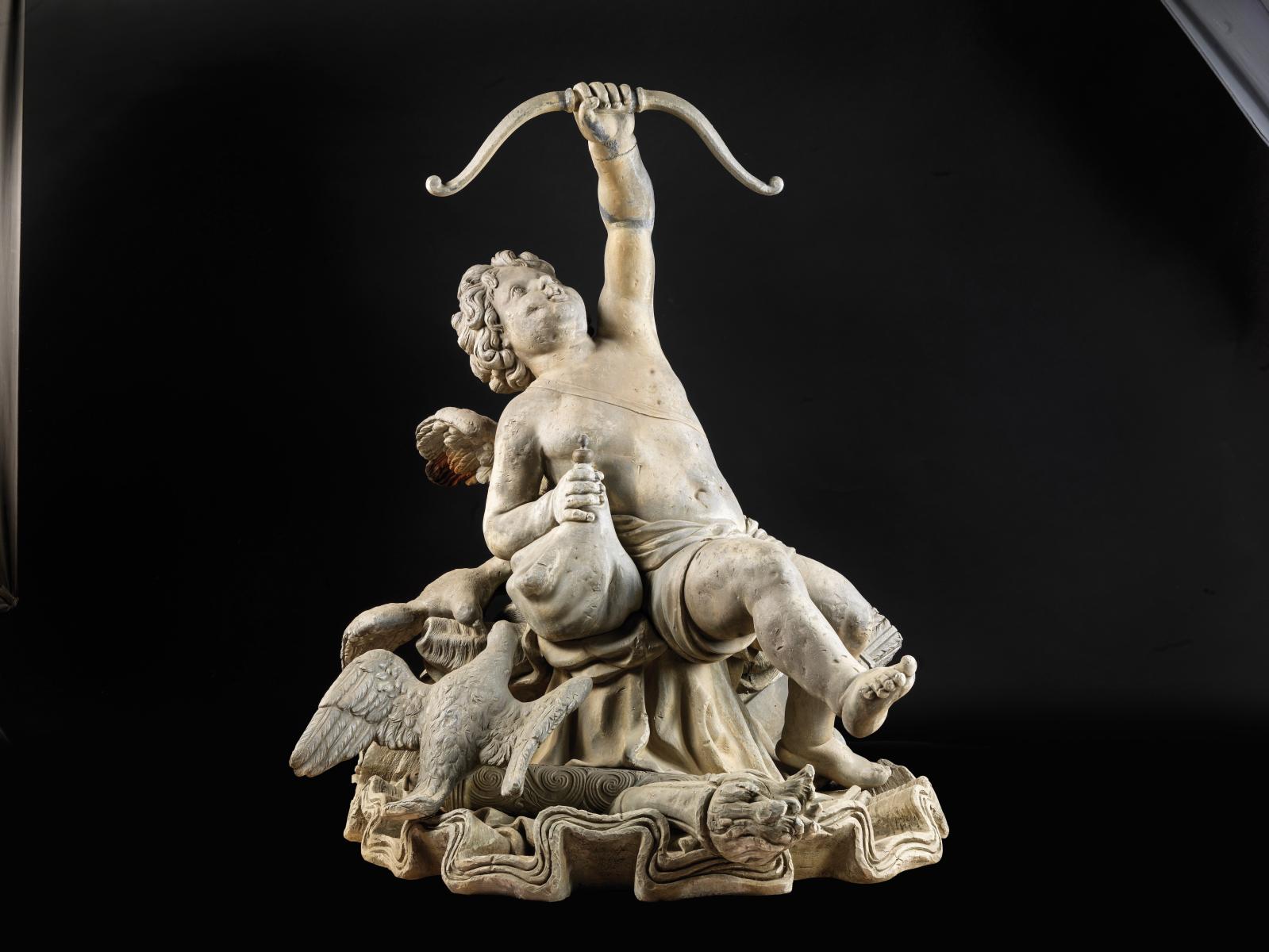 Everyone recognizes whimsical, nude, winged Cupid with a bow and quiver. Here he points his bow towards the sky, or more precisely the "sun", the emblem of Louis XIV. based on a work by painter and sculptor Louis II Lerambert (1620–1670), this fountain was made for the center of the pool in the Parterre des Fleurs (later the Parterre de l’Amour) in the gardens of the Chateau of Versailles. Sitting on an imposing seashell, Cupid brandishes his bow, his quiver, a symbol of the diverse nature of love, at his feet, accompanied by a cylinder containing messages to wrap around the arrows, a torch – representing marriage – and two doves. Commissioned in 1666, the work was placed at Versailles late the following year (Lerambert was paid 800 livres in July 1668). It dropped out of sight after major earthworks in 1681, probably put into storage at first, but in any case absent from the 1699 inventory. It was not found again, and identified, until 2007, with most of its attributes missing.

HAUTE ÉPOQUE - OBJECTS D'ART ET DE TRÈS BEL AMEUBLEMENT - XXth CENTURY DECORATIVE ARTS AND SCULPTURES - JEWELLERY - WHOLE FURNITURE FROM A PARISIAN APARTMENT
Salle 5 - Drouot-Richelieu - 9, rue Drouot - 75009
Kohn Marc-Arthur
Info and sales conditions
Catalogue
Salerooms
Results
Newsfeed
See all news
Due to the summer holidays there will be a pause in the newsfeed. We will be back Monday, August 24th. Have a wonderful summer vacation!
Met Museum in New York acquires Wangechi Mutu sculptures
US House of Representatives vote to create a national museum dedicated to Latin Americans
Church volunteer confesses to starting the Nantes Cathedral fire
Not to be missed
Pre-sale
Figurative art from van Goyen to Combas and the inescapable…
This 1955 work by Bernard Buffet belongs to a series of around 10…
Pre-sale
Henri Lebasque, painting the zest for life
His soft, nuanced palette captures moments of simple happiness on…
Pre-sale
The Gilles Labrosse collection: fashion throughout the…
Amassed by an impassioned enthusiast, one of the largest private…
Pre-sale
Achille Laugé: Cailhau in perspective
Found during an inventory carried out for an estate in the Var,…