Kept in the same private collection since the 19th century, this drawing by Honoré Daumier is a rediscovery. The two drinkers will enrich the catalogue raisonné currently being prepared. 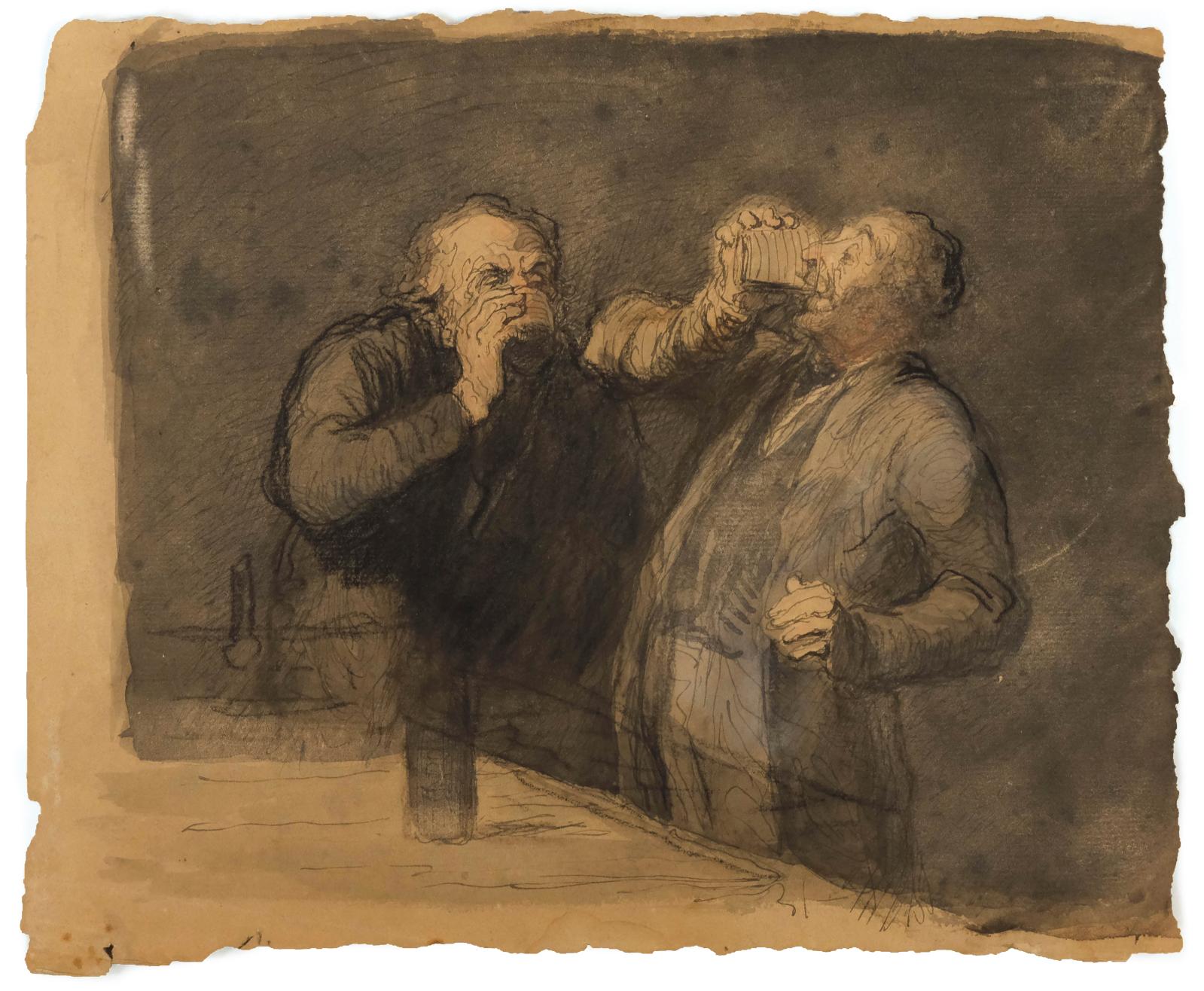 Honoré Daumier’s drawings and paintings are harder to date than his lithographs. Seldom exhibited and, therefore, rarely seen by critics, they left few clues. Much scarcer in the market than his lithographs, the drawings demonstrate a command of space, movement and anatomy, disproving contemporary critics who refused to consider him an artist. Daumier’s drinkers adopt various poses. They relax under a shady tree in an oil painting at New York’s Metropolitan Museum of Art, sing in a drawing at the Clark Art Institute in Williamstown, engage in a serious face-to-face discussion in a watercolour at the Baltimore Museum of Art or here, quench their thirst together. A sweeping human comedy unfolds on paper. Like his laundrywomen, lawyers, street performers and bourgeois, Daumier’s drinkers compose a social fresco reflecting his time, just like his contemporary Honoré de Balzac’s The Human Comedy. These works also reveal a bit about himself: his account books show that he purchased prodigious amounts of wine, rivalling the cellars of his friends Corot and Daubigny. Several hundred bottles were carefully inventoried after his death.

dessins anciens
Washington - 1120 North Fairfax, street Alexandria, Virginia - 22314
The Potomack Company
Info and sales conditions
News feed
See all news
Parisian auctioneer François Tajan dies, aged 57
Original Flash Gordon comic strip to be auctioned in LA
A masterpiece by Sanyu to be auctioned at Drouot
Donation rebuke for the Los Angeles County Museum of Art
Not to be missed
Pre-sale
Watch out for these!
A Parisian collector assembled this set of thirteen timepieces over…
Pre-sale
Back to nature
Combining spontaneity and sophistication, this work by Léonard Foujita…
Pre-sale
A snuffbox from the Empress Josephine
Given to the Comte de Barral by the Empress, this snuffbox promises…
Pre-sale
Botanical precision
An orchid brooch in gold and enamel from Tiffany & Co, late 19 th…