Scagliola blessed by an abbot

These nine panels are remarkable for more than one reason. Made using the scagliola trompe l'œil technique, they were the work of an Italian abbot of English origin, Don Enrico Hugford. 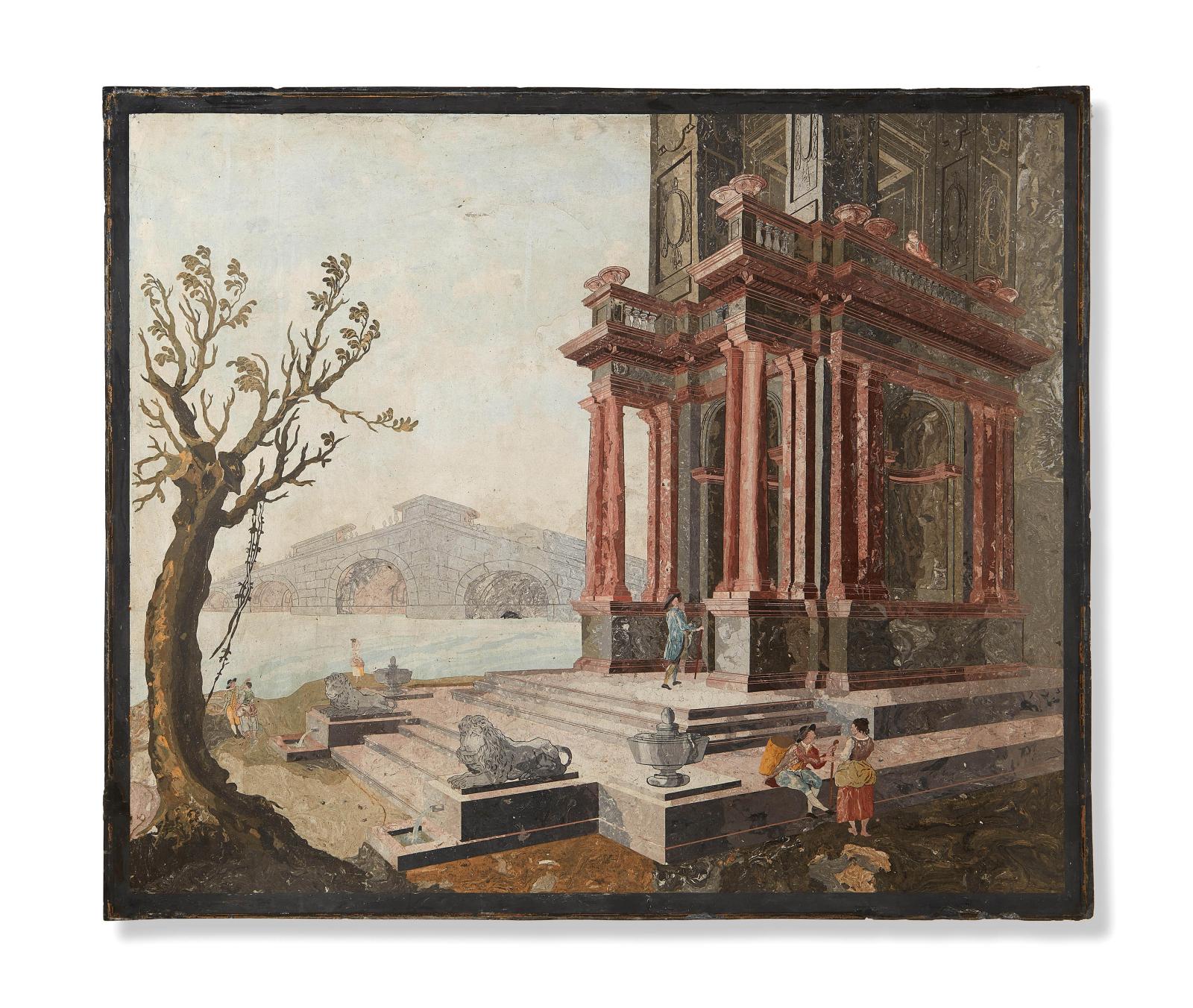 With their spectacularly meticulous execution, these singular works are truly astonishing. Contrary to appearances, they are not made of hardstone, but the art used to such fine effect, scagliola, imitates marble with far poorer materials. This highly useful substitution technique, which enabled many collectors to avoid the costly marquetry work of the Florentine hard stone manufactory, involved preparing a table of white stucco on which the design of the composition was traced and hollowed out following the contours defined, creating indentations that were then filled with coloured stucco paste. Each colour was contained in a separate hollow space, forming shades as subtle as those achieved in painting. This trompe-l’œil was combined with the technical perfection of the perspectives, somewhat similar to the capricci of the contemporary artist Giovanni Paolo Panini (1691-1765). The artist to whom we owe these large pictures was an abbot, Don Enrico Hugford. Born in Italy to an English clockmaker introduced to the Medici court, and brother to the painter Ignazio Hugford, he earned a reputation in his lifetime that transcended the borders of Italy. In the contemplative silence of the Vallombrosa monastery thirty-odd kilometres from Florence, where he lived according to the Benedictine rule, Don Enrico Hugford had ample leisure to devote to his large compositions, which established his name. The somewhat naive style of his vedute in no way detracted from his standing. His panels and tabletops were highly prized by English visitors on the Grand Tour passing by this abbey, one of the most powerful in Italy, where John Milton himself found inspiration for part of his Paradise Lost.

bijoux, arts décoratifs du XXe, céramiques
Cologne - Neumarkt, 3 - D-50667
Lempertz
Info and sales conditions
News feed
See all news
Planning for new museum dedicated to Le Corbusier begins
Virginia Museum of Fine Arts receives gift of over 8,000 Aaron Siskind photographs
Banker sentenced to jailtime for trying to smuggle a Picasso out of Spain
Domaine Royal de Marly museum, the Sun King’s hideaway, reopens
Not to be missed
Pre-sale
A new Ribera on the market
After Cimabue, Artemisia and the Master of Vyšší Brod, Paris is…
Pre-sale
The world revealed at last
This composite atlas printed in Nuremberg between 1753 and 1759…
Pre-sale
Picasso and the Minotaur
Through a complex iconography, Pablo Picasso exorcises his angst…
Pre-sale
The Brölemanns, Lyon bibliophiles
Kept in the same family until today, 260 works attest to the bibliophilic…