Openwork enamel was the favorite process of art nouveau jewelers such as Bréant and Coulbeaux, to whom this brooch is attributed. 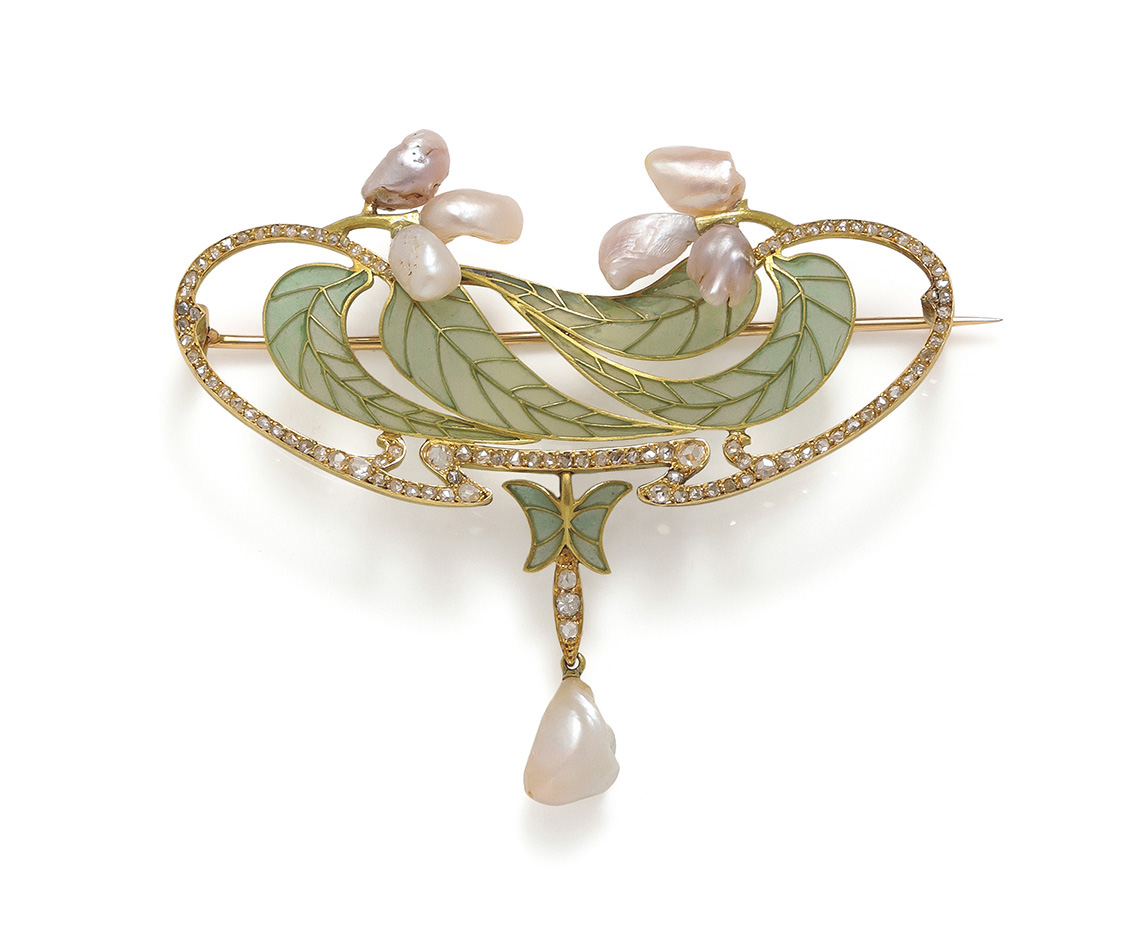 Early 20th-century designers drew inspiration from nature’s whimsical shapes. Ivy, the pretty climbing vine that wraps around tree trunks, becoming a symbol of eternal loyalty and affection, lent its undulations and evergreen leaves to Henri Bréant and Alfred Coulbeaux, surrounded by baroque pearls and a more restrained line of diamonds. After Bréant and Coulbeaux became partners in 1884, they won the gold medals at the 1885 and 1889 Antwerp and Paris Universal Exhibitions.

As their settings indicate, they were purveyors to the Austro-Hungarian Embassy. They also made the bronze base of an Émile Gallé vase displayed at the 1900 Paris Universal Exhibition and contributed to the centerpiece created for the Russian sovereigns’ 1896 state visit to France, on which other great jewelers and goldsmiths, including Vever Frères, Le Turcq and Desprès, also collaborated.

There is little information about them in the first decade of the 20th century. However, a legal announcement in the press mentions a court-ordered declaration of bankruptcy on March 19, 1908, and subsequent liquidation. Ivy is associated with Bacchus because it can soothe hangovers when brewed like tea.

JEWELRY / WATCHES / NUMISMATICS
Salle 11 - Drouot-Richelieu - 9, rue Drouot - 75009
Maison R&C, Commissaires-Priseurs Associés
Info and sales conditions
Catalogue
Salerooms
Newsfeed
See all news
White Cube: A film and “reverse gentrification project” in D.R.C.
Pictish Royal Hillfort Excavated in Scotland
Denise Gardner: First Black Woman to Lead Art Institute of Chicago Board
Major Works by Self-taught Artists Given to High Museum of Art
Not to be missed
Pre-sale
A Beautiful Gemstone
As this necklace mounted by Van Cleef & Arpels in the 1950s-1960s…
Pre-sale
The Eclectic Taste of a Senator
Lozère's senator, Paulin Daudé-Gleize, was well ahead in the decorative…
Pre-sale
Oscar Niemeyer: The "Poet of Curves"
Designed in the 1970s, this chair, combining metal and fabric upholstery,…
Pre-sale
Albinus and the Art of the Book
Celebrated for its magnificent illustrations, Bernardi Siegfried…