The Totemic Minimalism of William Turnbull

The Scottish sculptor and painter William Turnbull (1922-2012) is famous for his figurative and minimalist sculptures. Here it takes the form of a woman reflecting the vocabulary of primitive idols. 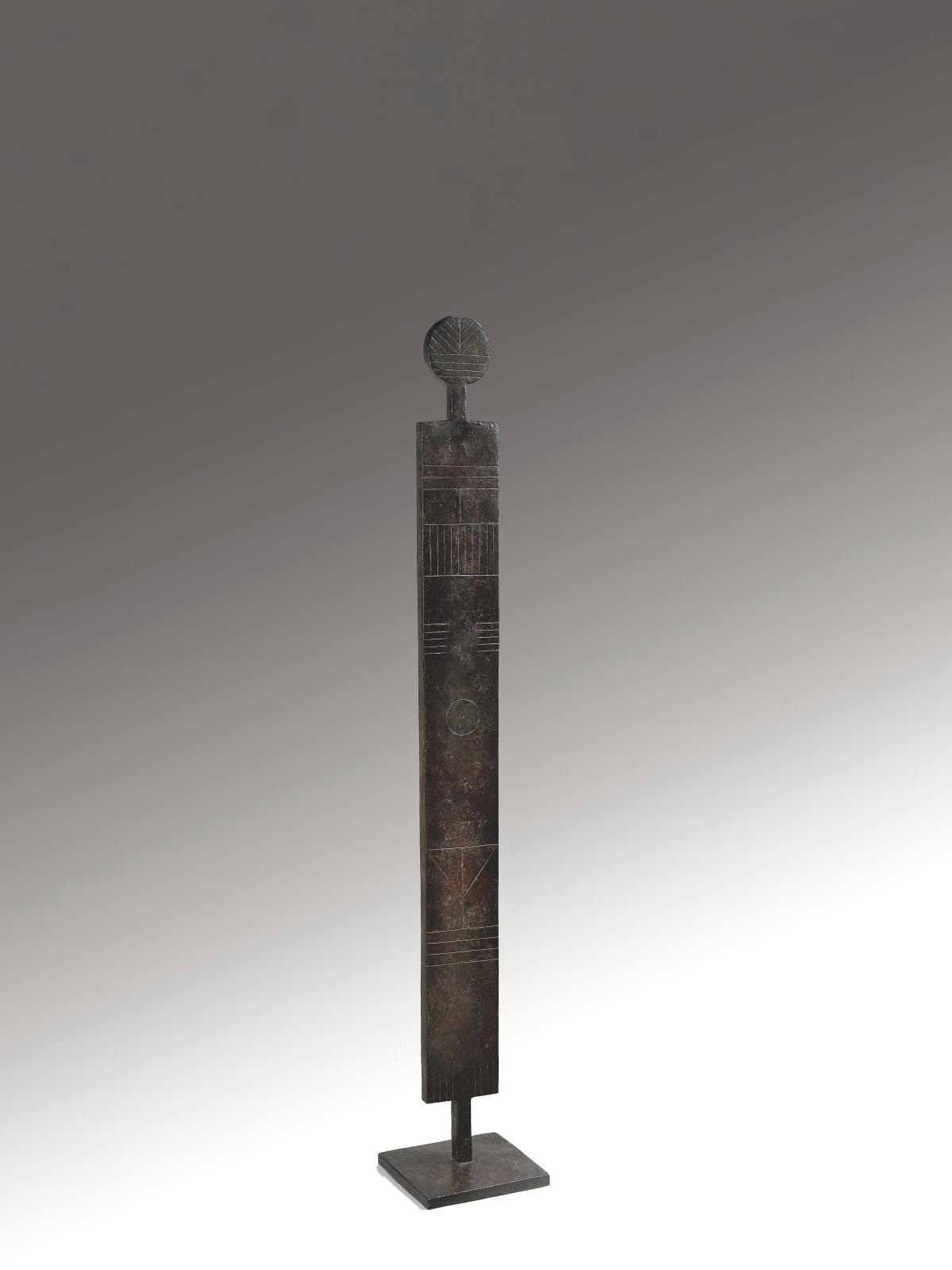 William Turnbull met Alberto Giacometti and Constantin Brancusi in Paris, where he lived from 1948 to 1950. Judging by the slender form of this hieratic patinated bronze Female Figure, with limbs fused to the body, he absorbed much from both. When he arrived in the French capital, he had recently graduated from the Slade School of Fine Art in London. During his studies there, he had spent a long time analyzing the repertory of Cycladic and African sculptures in the British Museum. When he returned to England in the 1950s, he began to integrate these archaic shapes with what he had observed in Giacometti's work. This led to sculptures very similar to primitive idols in formal terms.

These extremely simplified representations are offered to the gaze in one piece. With its totemic frontality, the Female Figure of 1989 encapsulates the female figure in a highly radical and expressive way. The whole piece is imbued with an almost sacred dignity. Like a statuette of fertility, it establishes itself as an archetype of the human form. The artist's work in series enabled him to develop the same repertory of motifs. The Female Figures series, between 1988 and 1990, marked a break with experiments in clay that were more in line with the Cycladic aesthetic. Turnbull constantly explored the tension between balance and immobility, and this piece vibrates with an elemental energy. This Female Figure is a reaffirmation of the forms he defined in the 1950s, which were exhibited in his first retrospective at the Tate in 1973. Totemic Figure (1957) and Screwhead (1957) illustrated the rudimentary yet modern codes found in his later pieces. This retrospective led the artist, then barely 51 yrs old, to profoundly reassess his approach, driving him to work in a more figurative style for a time.

A major minimalist
Female Figure thus returned to the aesthetic of his work in the 1950s and 1960s. This economy of means, so striking in his sculptural works, was also evident in paintings strongly influenced by Mark Rothko and Clyfford Still, even as he became a key member of the Independent Group alongside Richard Hamilton and Eduardo Paolozzi. He held his first solo exhibitions at the Hanover Gallery, presenting sculptures in 1950 and paintings in 1952, and subsequently exhibited in London galleries (including the Waddington from 1967) and abroad. His work was shown at the Venice Biennale in 1952 and 1957 and at the Carnegie International in Pittsburgh in 1958 and 1961.

Turnbull was the British artist who probably contributed the most to the language of Minimalist art. Many public collections now contain his works, including the Tate Museum in London and the Hirshhorn Museum in Washington. The market is equally active, for on May 11 this year, Head 2 from 1992 (h. 32 cm/12.6 in) created a sensation at the sale of Sylvie Guerlain's collection in the Hôtel Drouot when it fetched €101,283 (Fraysse Auction House). So the conquest of this large bronze looks set to be totemic.

Collection du Docteur Christian Simatos et à divers
Salle 5 - Hôtel Drouot - 9, rue Drouot - 75009
Kâ-Mondo
Info and sales conditions
Catalogue
Salerooms
Newsfeed
See all news
We will be on vacation from July 23rd - August 23rd. Wishing you a great summer and see you in September!
Santiago Caltrava Renovates San Gennaro Church in Naples
50% Funding Cuts for Arts and Design Courses Approved by UK Government
Instagram’s New “Sensitive Content” Controls Cause Concern Amongst Artists
Not to be missed
Pre-sale
Under the Protection of Maahes: A Rare Egyptian Bron…
This well-sized bronze statuette dating from Egypt’s Late Period…
Pre-sale
The Op Art of Vasarely and the Discourse of Descarte…
This painting by the master of optical art has never come up for…
Pre-sale
Lalanne and the Charging Rhinoceros
This bronze sculpture with an enamel patina, which is from a private…
Pre-sale
From the Abstraction of Viallat to the Silk Paintings…
Two worlds will come together in Nîmes: those of Vietnamese painter…