An Allegory of the Basque Country by Arrue

Ramiro Arrue again headed up the beautiful selection of works by Basque painters in Saint-Jean-de-Luz. This one was a gift to his friend, writer Marc Légasse. 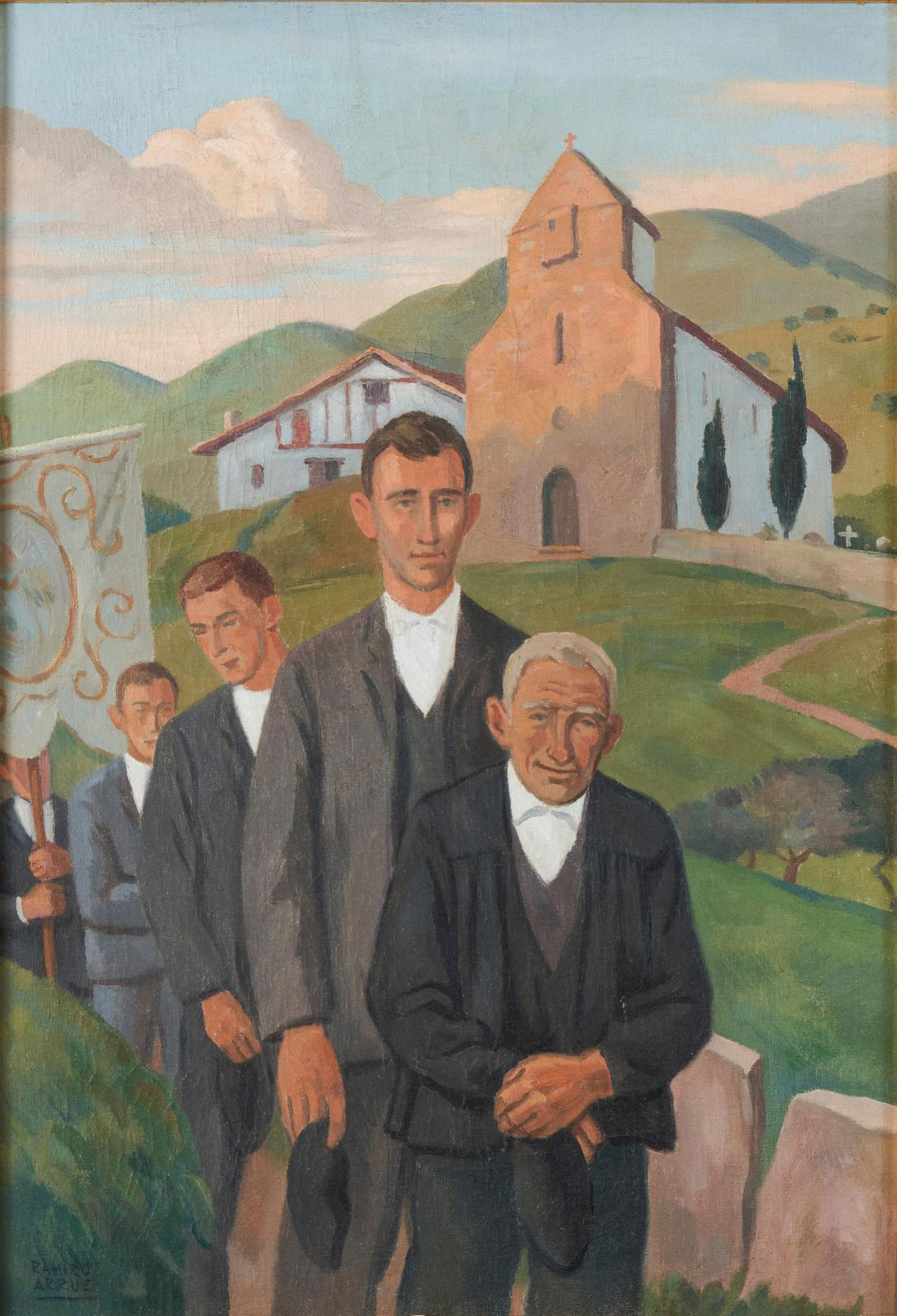 The painting is a full-scale version of a small gouache that Arrue (1892-1971) gave to the Musée Basque in Bayonne. It features what must have been one of his favorite themes—processions—while giving it more brightness and color. The powerful work is more than just a portrait gallery. In his monumental style, Arrue painted four people marching in front of a banner towards the viewer against a background typical of the Basque country’s landscape and architecture. He depicted them as members of various generations united body and soul by a single culture.

“The overriding trend in his work,” Basque artist and historian Philippe Veyrin wrote about the gouache in the Bayonne museum in Le Bulletin du Musée Basque, “consists of expressing the inner lives of landscapes and people through intelligent, harmonious compositions and the calm lines of very pure drawing. He manages to depict not just the outward aspect but the very soul of Basques and their country.”

The work was so important to Arrue that he gave it to his friend Marc Légasse (1918-1997). His descendants have owned it until today. It must have had a deeply symbolic resonance: Légasse, an important Basque shipowner, was also a writer, political activist and founder of the French Basque country’s independence movement. He owned around 30 cod-fishing boats, founded the Compagnie générale de grande pêche-La Morue française (the General Fishing Company -French Cod) and went into politics after the Second World War. In 1945 he was a nationalist candidate in the cantonal elections and campaigned for the creation of a Basque department. He even did a stint in prison for comments about “the French occupier” and state interference in Basque affairs.

BASQUE AND LANDES ARTS
Saint-Jean-de-Luz - 8, rue Dominique-Larréa, Z.A. Layatz - 64500
Côte Basque Enchères Lelièvre - Cabarrouy
Info and sales conditions
Catalogue
Newsfeed
See all news
SMG Trustee Quits Board, Refusing “Retain and Explain” Pledge
Versailles Preempts Charles Percier Preparatory Drawing
Steven Powers and Joshua Lowenfels Team Up to Open Gallery in NYC
Yuko Hasegawa Named Director of 21st-Century Museum of Contemporary Art
Not to be missed
Pre-sale
The Percier Style
One of Charles Percier's earliest drawings, which he made in Rome…
Pre-sale
Into Outer Space with Kuramata
t his Solaris cabinet with an airy base again proves that lightness…
Pre-sale
The Truly Sculptural "Crash" Watch by Cartier
Cartier's "Crash" watch is legendary for not only an extraordinary…
Pre-sale
Bernard Buffet in Amiens
Accompanied by a certificate of authenticity from the Maurice Garnier…