Like his wife Claude, François-Xavier Lalanne ushered modern sculpture into another dimension by giving it a utilitarian function. But his creations, like this bird, which will soon land in Tours, are always poetic. 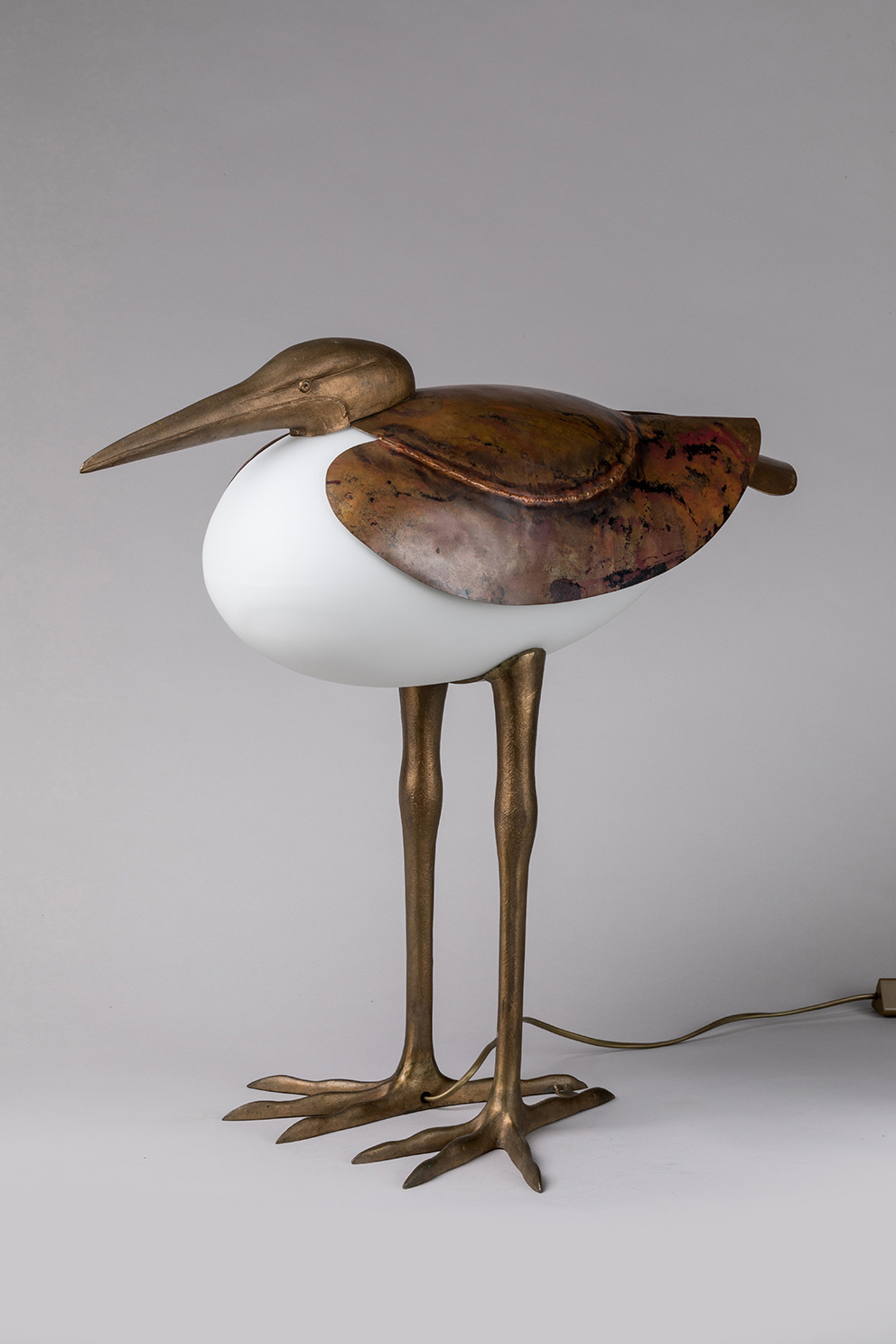 Was it a heron, an ibis or another aquatic breed that inspired the artist? Perched on its long, stilt-like legs, its head tucked into its neck, this wading bird seems to look like several winged wetland inhabitants. Echoing that mash-up, composite materials bring it alive, from copper with a red patina for the wings to gilded bronze for the head and limbs. Frosted opaline glass was a natural choice for the belly: this animal sculpture is also a lamp. Its whimsical inventiveness means just one person could have designed it: François-Xavier Lalanne (1927-2008). The bird’s rounded volumes seem like an obvious inspiration for this utilitarian object, where light is diffused by the body and softened by metal wings acting as a lampshade. Designed in 1990, the Grand Échassier (Tall Wading Bird) lamp was made by Artcurial in 900 copies. This one is numbered "13/900". The entire series, however, was apparently not produced, which explains why this model (approximately 60 cm, or 24 in high) is relatively scarce in the market and highly sought after. During the same period, Lalanne also designed the Petit Échassier (Small Wading Bird, averaging about 30 cm high, or 12 in). The only key difference is that it has just one leg, which is solid. The Lalanne studio has confirmed the authenticity of our work, duly filed in its archives under the number "2020/020".

From the Fantastical to the Practical
The appealing bird belongs to the dreamlike world imagined by François-Xavier and Claude Lalanne in June 1962, when the two artists, a painter and an architect respectively by training, decided to focus completely on sculpture, which they loved whether by Pompon or the ancient Egyptians. Two years later they were ready for their first joint personal show, "Zoophites", at Jeanine Restany’s Paris gallery, where François-Xavier presented the legendary Rhinocrétaire, the surrealist offspring of the union between a rhinoceros and a secretary. From then on they started turning sheep, pigeons, baboons, hippopotamuses, grasshoppers or crocodiles into chairs, bathtubs, fireplaces or lamps. It was around that time that Yves Saint Laurent discovered Lalanne’s work and commissioned him to make the incredible Bar YSL in metal for his apartment, seen again at the Grand Palais during the historic February 2009 sale. Many other collectors also fell in love with Lalanne’s extraordinary bestiary, such as Pierre and Jocelyne Noury of Rennes, who bought this Grand Échassier at Rennes Enchères OVV in October 2005. The bright bird will undoubtedly fly high during their collection’s upcoming dispersal, where many treasures of modern art and design will shine.

This sale focuses on modernity—notably with Marc Chagall—the golden age of decorators with Ruhlmann and post-war art with Charlotte Perriand, among others. 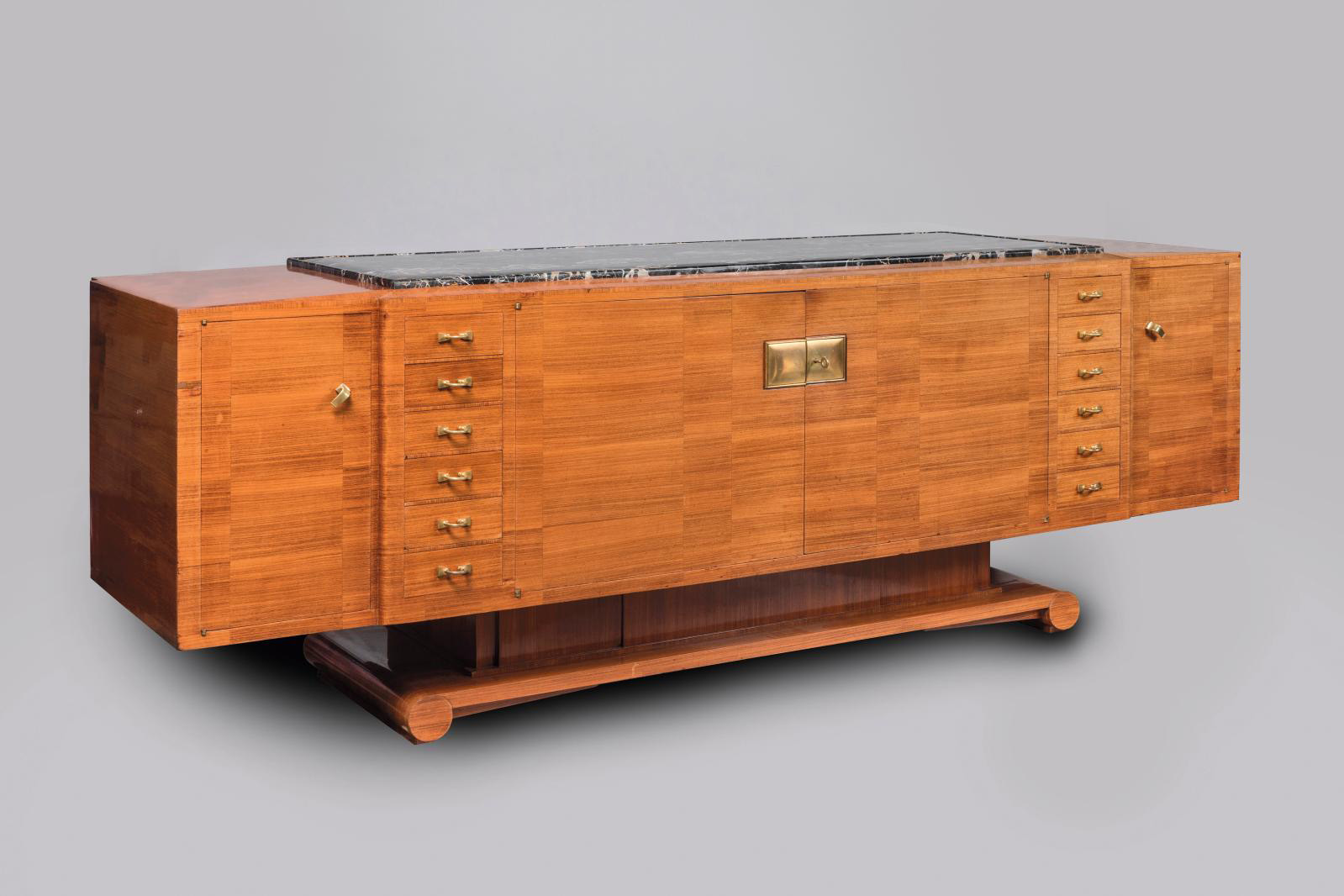 The “Riesener of Art Deco” is still making news! Who can resist the restrained elegance and luxury of this silverware cabinet? Not Félix Marcilhac, in any case. The design expert had this piece of furniture made c.1934 by Émile-Jacques Ruhlmann in his personal collection. He even wrote the certificate of authenticity that will be given to the future owner: “An authentic work […] in rosewood, a variation of the model the artist specially designed and created in violet wood for Van Beuningen in 1931, bearing Émile Jacques Ruhlmann’s reference number 2136.” Pierre and Jocelyne Noury, real estate developers and collectors in Rennes, subsequently acquired this impeccably documented and inventoried piece. Part of their Art Deco furniture and decorative arts collection will be dispersed at the sale. They bought their first piece In the 1980s: a secretary from around 1940 by Jules Leleu with an Indian rosewood veneer (€2,000/3,000). They continued with a maple-veneer cabinet by the same designer, with the same estimate, and an “Orsay” saleswoman’s table made c.1923 by Louis Süe and André Mare in Makassar ebony (€5,000/8,000). For decades they traveled the length and breadth of France in search of Art Deco treasures. Mr. Noury spotted this huge Ruhlmann silverware cabinet in a shop window on rue Bonaparte during a business trip to Paris. He and his wife were soon back at Félix Marcilhac’s gallery in the capital to buy it. It is one of the best examples of how tradition and modernity were combined by the great decorator, who was passionate about Louis XVI and Directory furniture after attending the 1912 Doucet Collection sale. The new 20th-century style also inspired him, like the baseboard frame ending in two spherical volutes recalling the circles of Robert Delaunay’s Rhythms. The long shape and typical height of the support and the sublime precious Indian rosewood veneer evoke the Louis XVI period, while the locks with their modern profile are similar to those made for other creations jointly designed with Jan and Joël Martel—a combination of styles that is always perfectly balanced.

ARTS+DESIGN 4 - Outside the Walls
Vendôme - Hôtel des Ventes 2, rue Albert Einstein - 41100
Rouillac
Info and sales conditions
Catalogue
Newsfeed
See all news
Rock-Cut Tombs Accidentally Discovered in Al-Hamidiyah Necropolis
Controversial Redevelopment Plan Threatens Major Delhi Art Institutions
Jessica Silverman Gallery Opens in San Francisco’s Chinatown
Previously "Lost" Bronze Vase Found Masquerading as Table Base in Oklahoma
Not to be missed
Pre-sale
Pierre Klossowski and André Gide: When Drawings Become…
Pierre Klossowski (1905-2001) is among the headliners at a modern…
Pre-sale
Love Through the Eyes of Boucher and Watteau
The top results of this classic sale could be posted in the early…
Pre-sale
Cartier's "Mystery Clock"
This monumental Art Deco timepiece in rock crystal, onyx and marble,…
Pre-sale
The Style of French Architect Charles Percier
One of Charles Percier's earliest drawings, which he made in Rome…