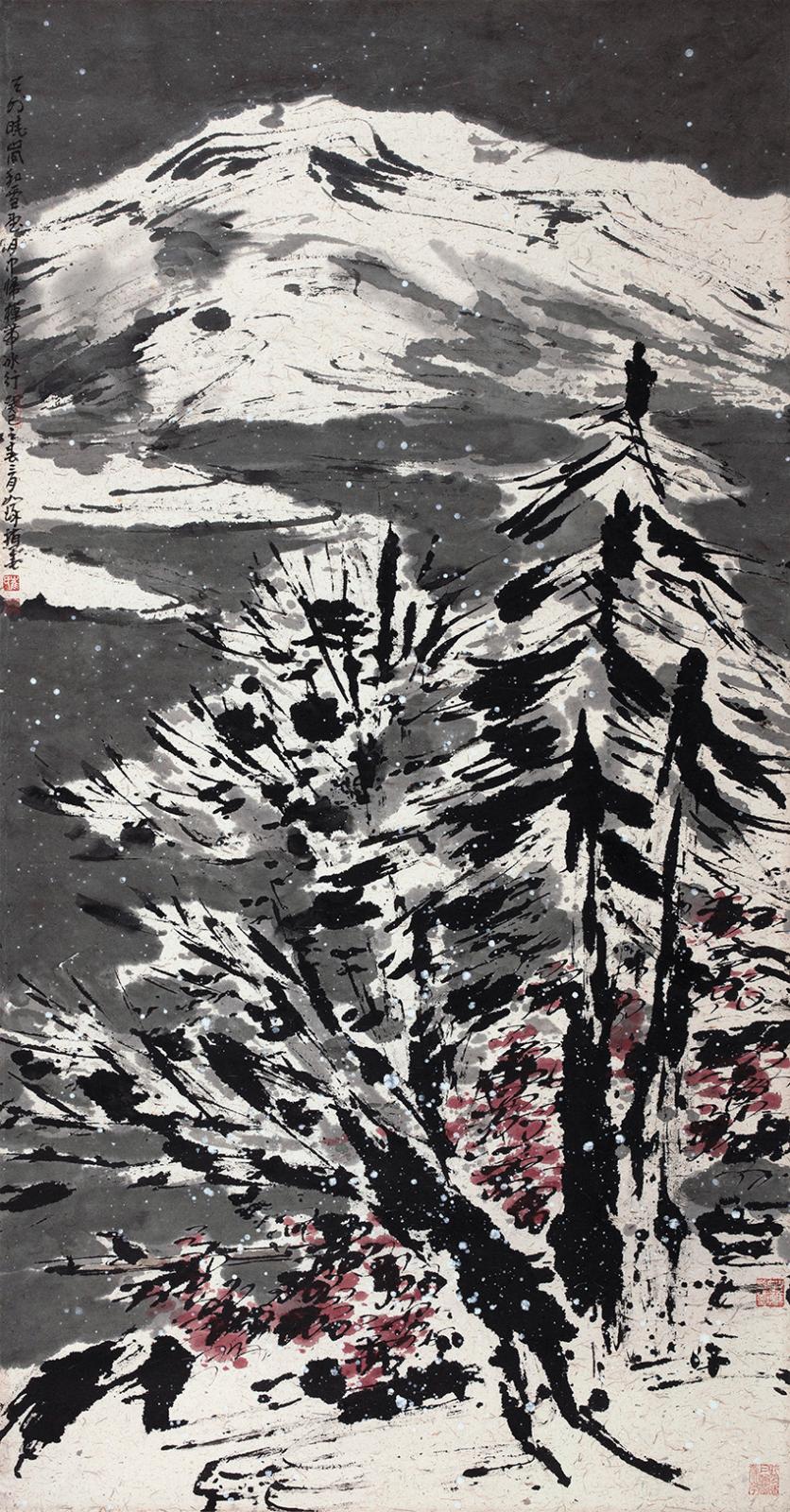 Each feature, whether water, mountains or trees, reflects the artist’s personality and ideals. The snow-capped peak evokes his solitary soul, the breeze rustling through the pines his peaceful spirit. snow, historically a key subject in Chinese painting, is Cui Ruzhuo’s trademark. In his work, it takes a wide array of forms shaped by time and the elements. Dancing in the morning sun, mixed with earth or melting, its presence immerses viewers into a meditation on the universe. This work recalls the greatest names in scholarly painting under the Song dynasty, including Li Cheng, Juran, Fan Kuan, Guo Xi, Wang Shen, Xia Gui and Huang Gongwang. Cui Ruzhuo carries on their legacy: tripartite spatial organisation, the arrangement of subjects in order of decreasing size and the technique combining thin layers of diluted ink wash with thick, dark lines. But he is no slave to tradition: voids occupy less space and the brushstrokes are brisker and freer. Although he seems to be swimming against the tide, he is a heavyweight on the Chinese art market, ranking alongside Zao Wou-ki and Zeng Fanzhi as one of the most highly priced artists. According to Artprice, in 2018 the total volume of his auction sales hit $124.3 M, including $21.5 M for the Snowy Mountains alone at China Guardian Hong Kong on 3 October. The Beijing artist has also made his mark in the institutional domain: the first museum in Tokyo ever devoted to exhibiting and studying Chinese works, the Cui Ruzhuo Art Museum, which opened with great fanfare on 13 July, is named after him.

art moderne et contemporain
Hong Kong - JW Marriott Hotel Ballroom, Pacific Place, 88, Queensway Admiratly - 00
Poly Auction
Info and sales conditions
Newsfeed
See all news
OpenWalls Arles 2020 photography award winners announced
Artist Takashi Murakami reveals financial woes on Instagram
Winner of the Istanbul Photo awards announced
The Fiminco Foundation signs an artistic and cultural education project in Seine-Saint-Denis
Not to be missed
Pre-sale
Superb tapestries from the Tchaloyan collection
Over fifty pictures in wool and silk dating from the 15 th to the…
Pre-sale
The fires of love
Created in the late 18 th century, or more probably even in the…
Pre-sale
Beloved Ireland of Jack Butler Yeats
Jack Butler Yeats' works don't often appear in the market. But in…
Pre-sale
Here's to your love! Lemoyne at the Château of Versa…
If this face looks familiar, it means you have a keen eye. François…