No two of Jean Royère’s creations look alike—quite a feat given the designer’s prolific output in every genre, including the Liane lamp. 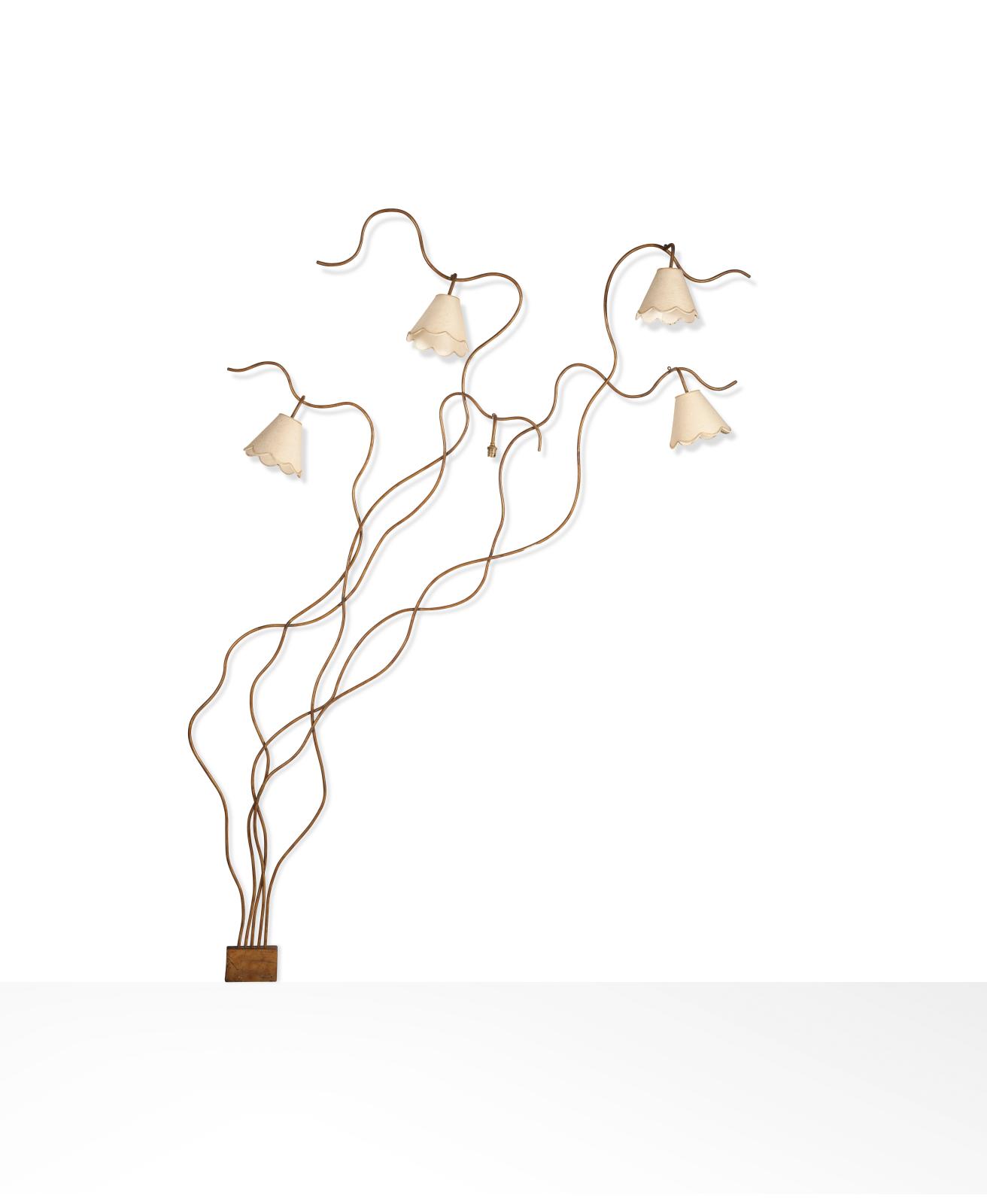 The wishes or requirements of whoever commissioned this lamp around 1960 are unknown. In any case, it has been kept in the Paris area by his family. The undulating vines and the color of the patina are the designer’s trademarks, although they are more seldom seen with a golden patina, black being a more common color.

The son of a senior civil servant, Jean Royère studied law in Paris and Cambridge before, at age 29, giving in to his calling as a designer, which he had kept a secret until then. in the 1930s, in addition to metal lamps Royère started designing furniture with simple, functional shapes and in economical materials for mass production (housing projects, schools, etc.) as well as in rare, precious materials for wealthy clients (Boutros-Ghali, Henri Salvador, etc.) and official commissions (universal exhibitions, embassies in the Middle East, etc.). He was soon deemed one of the most creative, innovative designers of his time. His pieces often feature startling colors, lattice, herring-bone and ball motifs and organic and plant-based shapes—the Éléphanteau and Œuf armchairs, Trèfle table, Champignon lamp, Ours polaire sofa—which critics dubbed "fairground baroque". Beneath a deceptively simple appearance, they are all witty, elegant and sophisticated. An example is the Liane lamp from the early 1950s, which, like a climbing plant, goes beyond its function.

The Inner World of Yves Tanguy

The top place is bound to go to this 1950 painting: a gift from the artist to his friends Marie-Louise and Jehan Mayoux, which has remained in their family ever since. 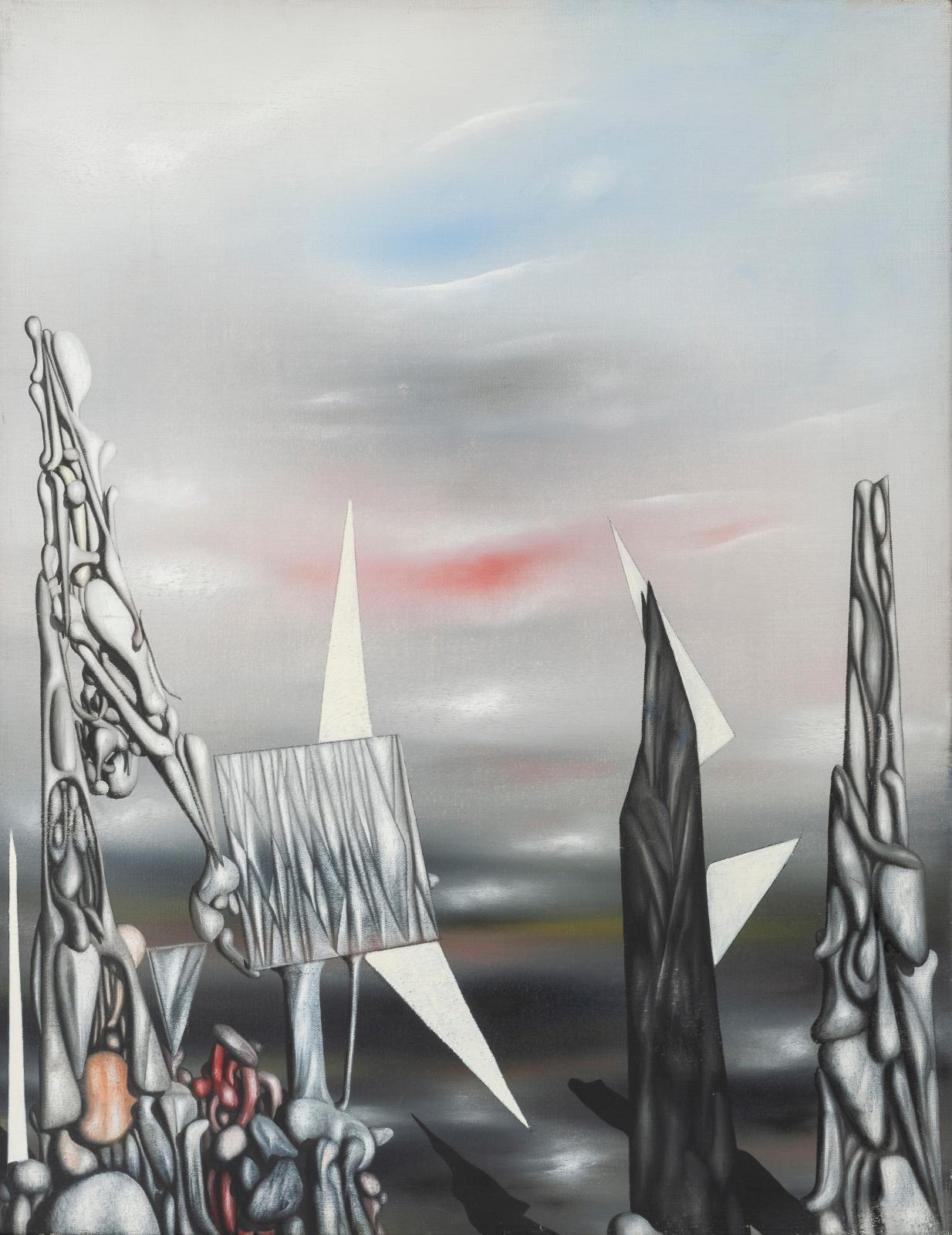 On November 9, 2018, the (same) auction house sold another painting by the Surrealist artist, La Couche sensible (The Sensitive Layer), for €310,000: double its estimate. The artist gave it to Marie-Louise, wife of the poet Jehan Mayoux (1904-1975). The friendship between Tanguy and the couple began in 1933: the year Jehan made contact with André Breton and Paul Éluard, and signed the principal manifestos of the Surrealist group. Two years later, Tanguy spent his summer vacation in the couple's house in Corrèze. Declared unfit for duty in 1940, he left for New York, officially to exhibit at the Pierre Matisse gallery, and unofficially to join the painter Kay Sage, whom he had met in Paris. They married and moved to Connecticut.

Despite the distance—Marie-Louise, a schoolteacher, was transferred to Algeria, and Jehan was imprisoned in France and then Germany—their friendship remained stalwart, with Tanguy offering to help his friends financially and take in their son Gilles. They were reunited later, during the artist's travels in France.

"Here, in the United States, the only change I can see in my work probably concerns my palette," he wrote. His colors became more intense, while the "object-beings" to which he gave different forms took over the space, invading the foreground, gaining in complexity and rising towards the sky—like these sharp peaks piercing a stormy sky...