It was decidedly battle stations with this colorful painting, which came from a collection in the Lyon region to face the turmoil of the auction room. Acting as an official Navy painter, the artist illustrated his most daring artistic theories. 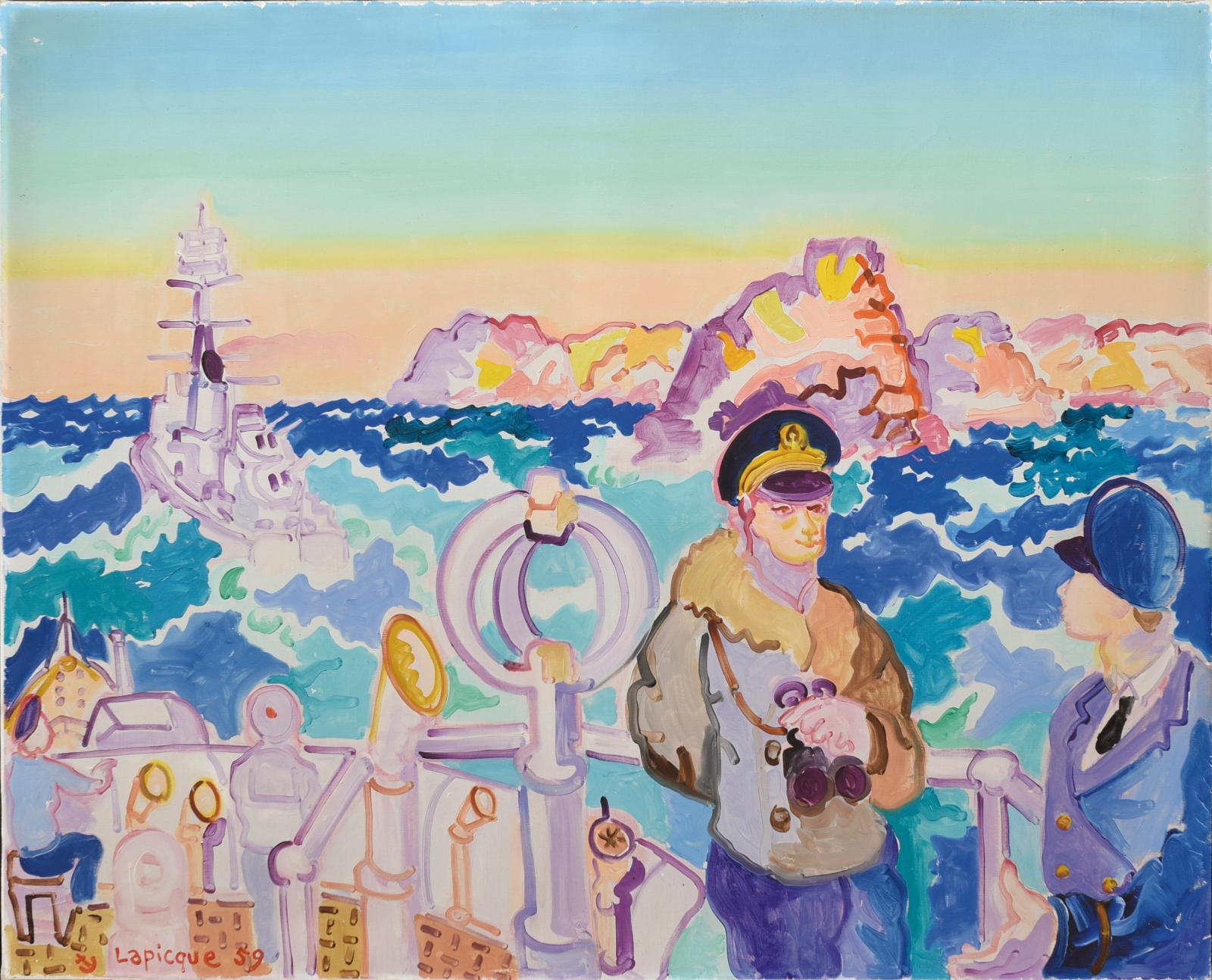 In the fall of 1958, Charles Lapicque (1898-1988) embarked on a French Navy aviso boat to follow the naval maneuvers taking place off Brest, in the Finistère region (Brittany). For several days, the painter made endless sketches of everything he saw, using them back in the studio as a basis for a new series of paintings that took up a good part of 1959, and abandoning a series he had been devoting to Roman history. Like cinematographic images reconstituting an overall movement, all these pictures—now scattered between private and public collections, with one in the Musée des Beaux-Arts in Dijon, Burgundy—show how the operations unfolded, with a multitude of simultaneous details.

Manœuvres au large de Brest (Maneuvres off the Coast of Brest) is a very lively scene divided into several planes. In the first, two officers are seen deliberating, while further away on the deck, sailors are carrying out orders. The eye then moves to a ship that closes the perspective, as the artist has deliberately placed himself in its choppy wake. Lapicque's presence at the heart of the operations was no accident: officially appointed painter to the Navy in 1948, he had already participated in several maneuvers. His fascination with war fleets first came to light in a 1929 painting of a torpedo boat (Musée National d'Art Moderne).

Lapicque and the Laws of Optics
But Lapicque actually started out in a completely different direction. He entered the École Centrale des Arts et Manufactures in Paris, graduating in 1921. He then began a career in the power industry as an engineer: a job he abandoned in 1928 to concentrate solely on painting, which he practiced assiduously as an amateur. He then found a supporter in gallery owner Jeanne Bucher, who offered him a contract and staged his first exhibition in 1929. But the science bug was just as strong as his love of art: he resumed his studies at the University of Paris, and became fascinated by the perception of colors, his favorite area. To further his knowledge, he also enrolled at the Ecole Supérieure d'Optique and in 1938 submitted a brilliant doctoral thesis in Physics on "The Optics of the Eye and the Vision of Contours".

Manœuvres au large de Brest again shows how much this scholarly research influenced the painter's creative vision: the figures only come to life through interlinked colored masses, from the pale green sky to the ultramarine ocean by way of these astonishing pink and yellow rocks. This avant-garde approach always kept him on the fringe of the tiny circle of naval painters, all firm upholders of the realist tradition. Lapicque eventually gave up this position in 1966.

This work, which comes with a 2016 certificate of authenticity from the Georges Rouault Foundation, sheds light on the art of a deeply religious painter. 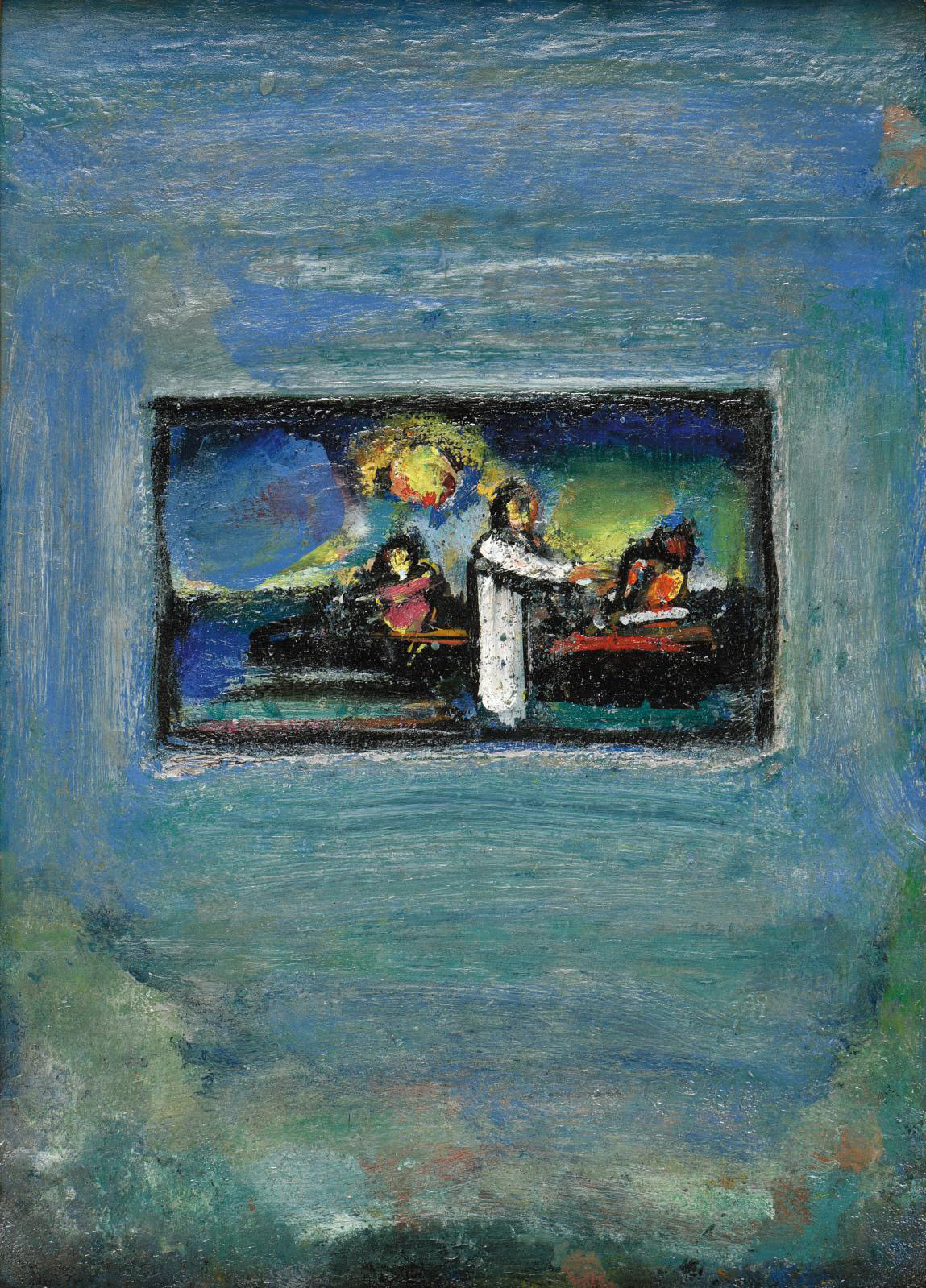 Rouault (1871-1958) took his first Holy Communion at the age of 24. Despite a secular upbringing, he warmly embraced Catholicism, which henceforth played a major part in his life and work. In 1895 he grew close to some neo-catholic writers, including Joris-Karl Huysmans and Léon Bloy, and sought to give religious art a new direction.

In 1901 Huysmans, who wrote Against the Grain, invited Rouault to Ligugé, a benedictine abbey in Vienne where a group of intellectuals gathered and planned to found a community of catholic artists. The passage of the Waldeck-Rousseau Act against associations put an end to their project and Rouault returned to Paris. By then, religion was his main theme, even his calling. He depicted the Life of Christ and the Passion with thick colors, summary forms and wide black outlines to express his religious feeling without concessions or flourishes. Over the years Rouault developed a modern, expressionistic language combining a heavy, austere, muffled atmosphere with an innovative, original style, making him one of the 20th century’s greatest religious painters.

As a child, Rouault’s maternal grandfather gave him painting lessons. Later, he trained at the School of Fine Arts with Gustave Moreau, who encouraged his students to jettison convention, bare their true nature and express their feelings. His apprenticeship with stained glass restorer and painter Émile Hirsch at the age of 14 also shows in this painting, where a small rectangle in the center of the composition frames the main scene. In the late 1910s, Rouault finally revealed his true nature: that of an extraordinary artist.