A lacquer work by Nguyen Van Ty was the star of this auction devoted to "myths and realities of Indochina, 1800-1960". It is the only complete five-panel version of this work. 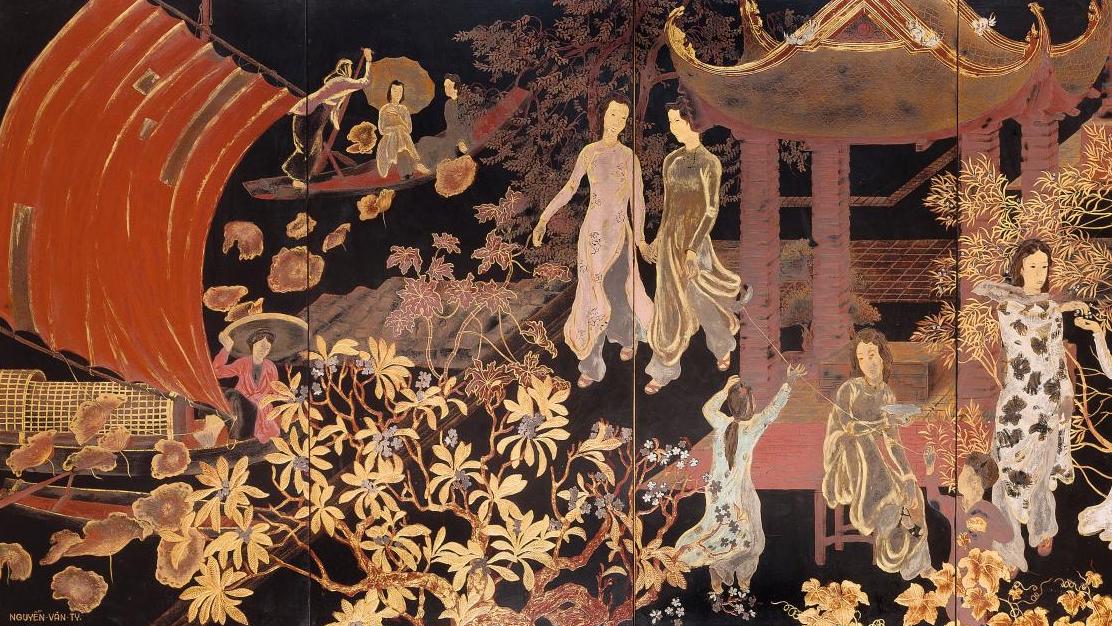 On 2 April 2019, a monumental 15-panel version of Rapides de Cho-Bo sur la rivière noire (“The Cho-Bo Rapids on the Black River”), also presented by Lynda Trouvé OVV at Drouot, set a new world record for the artist: €381,000. Two weeks later, a lacquered wood polychrome and gold leaf diptych on the same theme fetched €102,870. Made in 1942, this five-panel composition entitled Hoi Dinh Chèm (“The Village Feast”) is emblematic of the renewal of art in Vietnam. The third known interpretation of the theme and the only complete version listed, it is based on the same principle as Les Rapides de Cho-Bo. Fascinated by the site, the artist went there several times between 1940 and 1942. On 18 March, the central panel of the first version (dated 1940), estimated at €800/1,200, fetched €10,483. It had belonged to the same family in France since 1954. Three of the five original panels of the second adaptation of Hoi Dinh Chèm, made the same year, are currently on display at the Museum of Fine Arts of Vietnam in Hanoi. Our painting, the third known interpretation, was bought at the annual Indochina School of Fine Arts show by a surgeon who worked at the army hospital in Haiphong from 1928 to 1947. It has been in the same family ever since. With Pham Han, Nguyen Gia Tri and Nguyen Khang, Nguyen Van Ty belonged to the generation of Vietnam’s great master lacquerers. He graduated from the Hanoi School of Fine Arts in 1941 and taught there until 1969, reviving this ancestral art form and retrieving the precious material’s secrets.

art d'Asie
Salle 1-7 - Drouot-Richelieu - 9, rue Drouot - 75009
Lynda Trouvé
Info and sales conditions
Catalogue
Salerooms
Results
Newsfeed
See all news
The Eva Hober gallery closes for good
The French budget dedicated to culture will increase by 4.8% in 2021.
Arrests in the robbery and vandalism of the Church of Sant’Agata a Collegio in Sicily
Thyssen-Bornemisza Art Contemporary (TBA21) launches online platform: st_age
Not to be missed
Pre-sale
Hector Guimard: the essence of Art Nouveau
Though no introduction is needed for Hector Guimard, architect of…
Pre-sale
A painting by Jean-Léon Gérôme from the Moreau-Nélaton…
Last seen in 1900, this landscape of Paestum with a remarkable pedigree…
Pre-sale
An unpublished and mysterious envoi by Stendhal
This copy of Le Rouge et le Noir ( The Red and the Bl ack) is an…
Pre-sale
Master cabinetmaker Charles Topino’s trademark
The furniture-maker’s signature pieces included small Transition-style…