Christo Ties Up the Pont-Neuf

As a tribute to the recently deceased master of land art, this composition has reemerged: one of a series of works created as a prelude to his monumental happening. 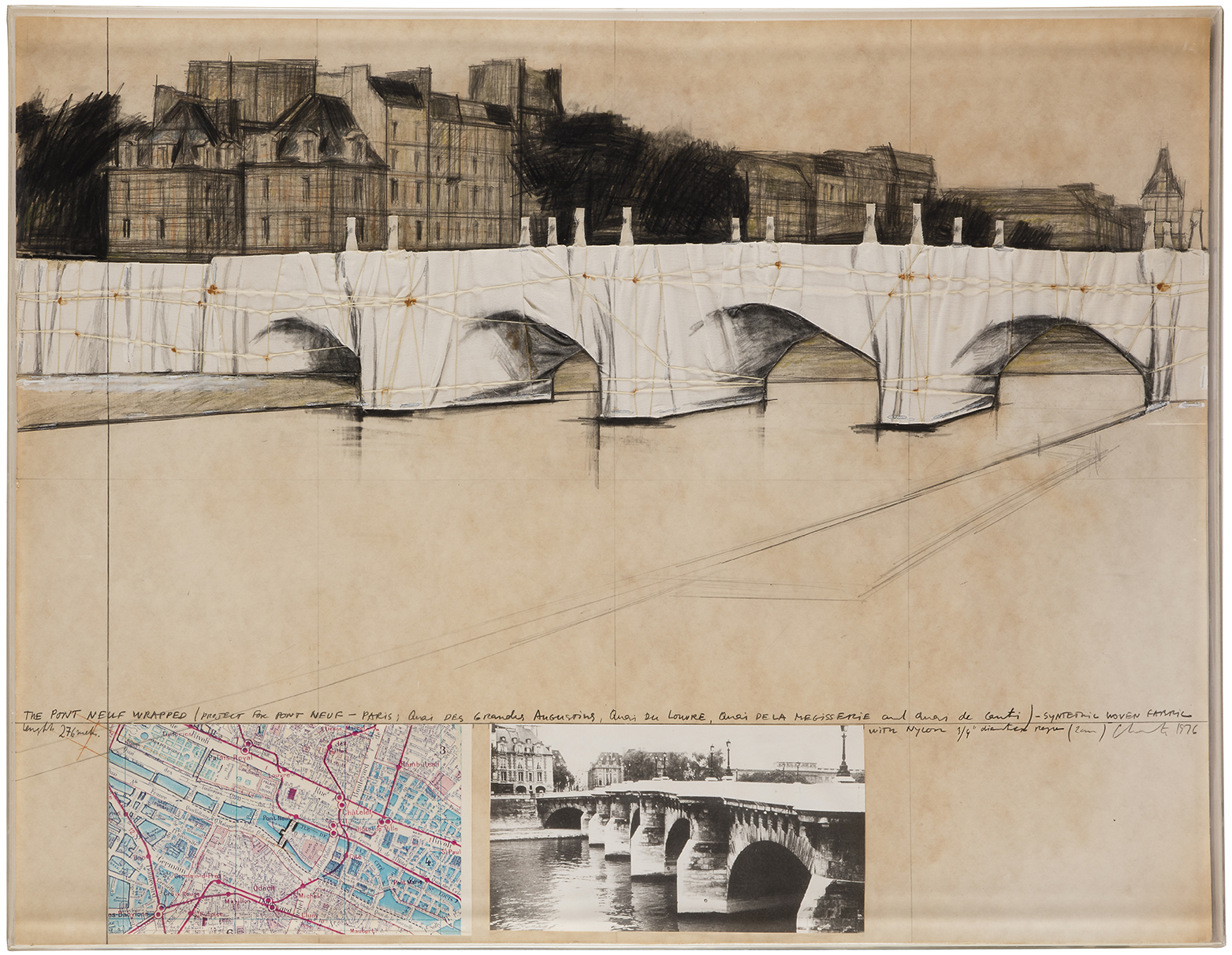 The surreal wrapped silhouette of the Pont-Neuf is forever etched on the memories of all the Parisians and tourists who saw it between September 20 and October 7, 1985. This is nothing less than the most venerable construction works in Paris, completed under Henri IV: the capital's first modern bridge, free from any dwellings and featuring the city's first sidewalks... To cover this bridge 238 m long and 20.5 m wide (approx. 780 ft high and 67 ft wide), it needed 40,000 sq. m. (approx. 430,500 sq. ft) of fireproof polyamide canvas and twelve metric tons of steel cables, and involved three hundred specialists supervised by twelve engineers. Starting in the mid-1970s, the highly complex operation had been carefully planned by Christo, the architect of this outsize happening, with help from his wife Jeanne-Claude. But well before the project was carried out, he produced a whole series of preliminary paintings, drawings and mixed media works, as witness a 1976 piece entitled The Pont Neuf Wrapped. With annotations, it presents the bridge before and after wrapping, with a photograph of it in its natural state, and a map showing its position in the city center. This brilliantly executed work also reminds us that Christo was a marvelous visual artist, who had studied at Sofia's National Academy of Art in Bulgaria, his native country. These compositions were not mere preparatory variations: they were sold to European, American, Australian and Japanese collectors over ten years to help raise the funds needed for the project. These were soon managed by a company founded by Jeanne-Claude, the energetic organizer. So the operation did not cost French taxpayers a penny, as the artist himself emphasized in an interview with Le Figaro (September 20, 1985): "I refused all patronage and official aid. That's a principle."

After his first intervention on the Kunsthalle in Bern in 1968, Christo continued to wrap natural sites and historical monuments. He will be particularly remembered for the eleven islands in the Bay of Biscayne, Miami, in 1983. Later, perhaps in 2021, we will see the new garb of the Arc de Triomphe, planned long before his death on May 31 this year. In any event, the drawings he produced prior to these ephemeral masterpieces now appear as valuable testimonies, whose popularity is constantly on the rise...

Le Corbusier's works are following in turn under the hammer of this auction house. Once again, a bull shakes its horns in the arena. 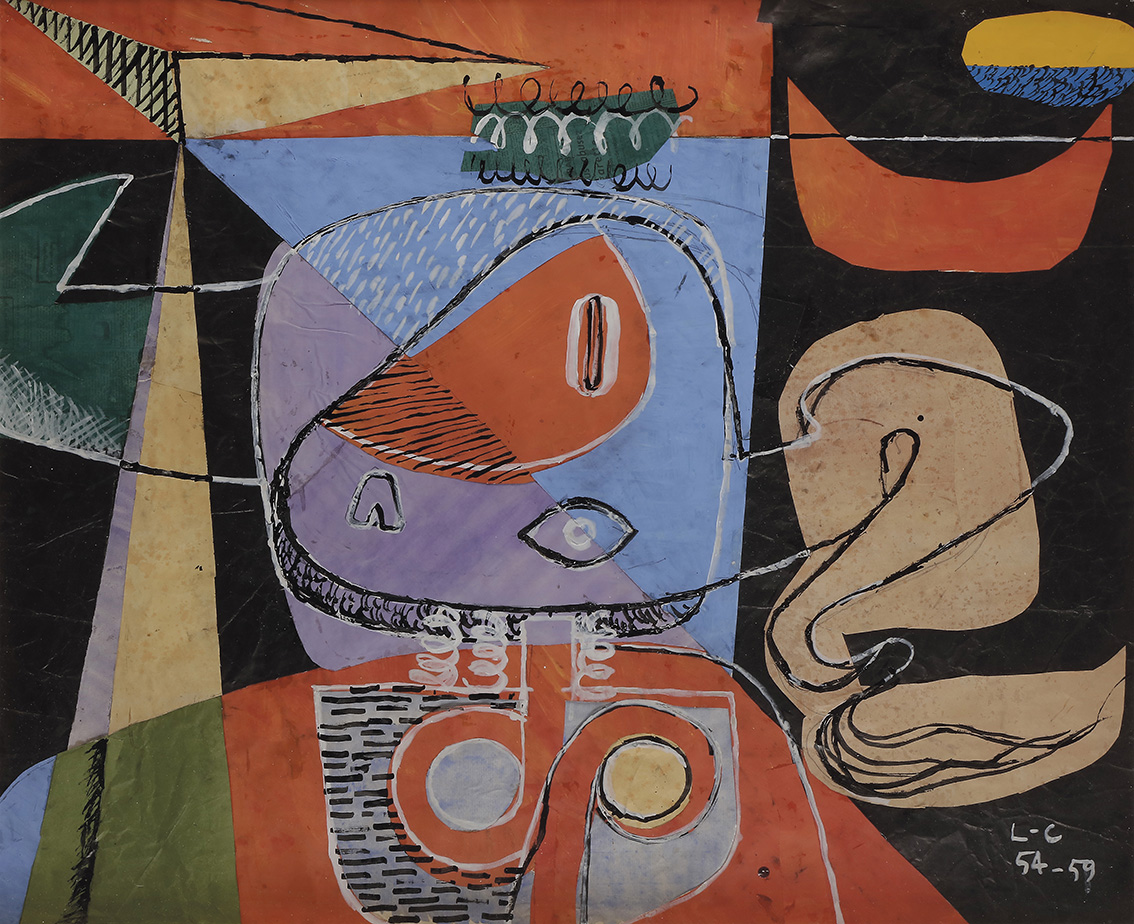 On June 3, a 1963 large collage in pieces of colored and gouache-painted paper on the same theme was announced, but the auction house preferred not to communicate on its result. However, this composition dated 1954 (the year this variant of the "Bulls" was created) and 1959 (the year it was actually produced) might well have a more enviable fate. While the beast's head is easily discerned, the forms surrounding it, taken from the architect's cosmogony, are more difficult to make out. This subject, one he explored from 1951 onwards, was the last in Le Corbusier's work, and a significant one—especially as it was also a way for him to explore the paths of Mediterranean mythology. Considered the "father of modern architecture" Charles-Édouard Jeanneret, aka Le Corbusier (1887-1965, the name of one of his Albigensian ancestors), devoted half his days to a "secret labor"—painting and drawing. In 1918, with his friend the artist Amédée Ozenfant, he founded Purism: an art movement advocating the return to a classical order, with frontal compositions devoid of pathos. He produced numerous color essays involving eighteen different subjects on the theme of the bull, which took shape in nineteen large oils, various sculptures and a huge tapestry, used as the stage curtain of the Bunka Kaikan theater in Tokyo.