Plastic unity creates the optical illusions at the center of Vasarely’s geometric poetry. 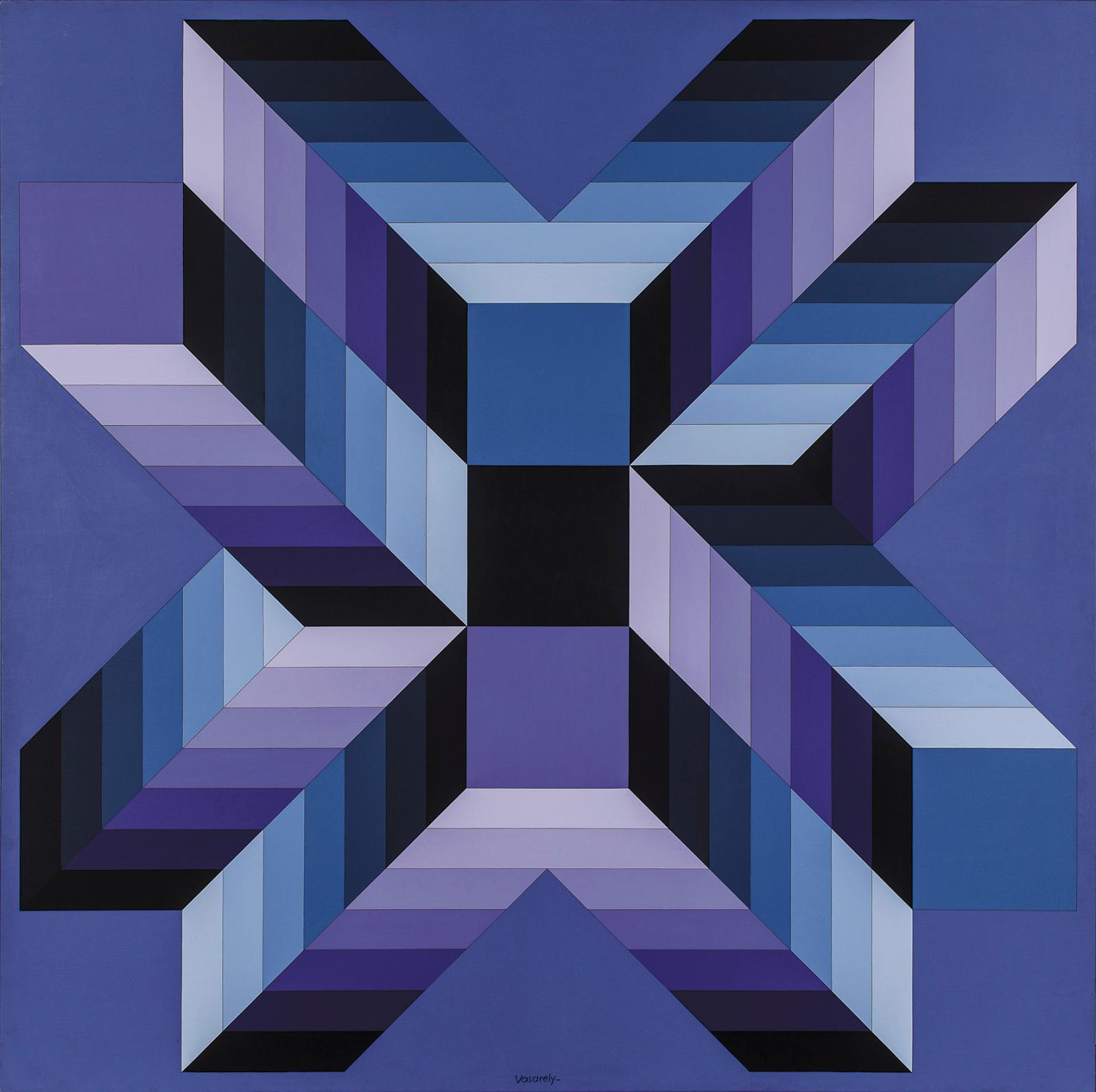 Victor Vasarely was obsessed with lines since he was a child. The shapes he associated with each other by affinity were seashells or flowers, which he already arranged in such a way as to create a shading of colours, or, conversely, by seeking their opposition. He came to painting through drawing. Vasarely deepened the method of his early years with his experiments, focusing on optical effects. In 1948, new visual horizons opened up to him when he discovered southern villages of France drenched in sunshine, so intense that he transformed reality into a geometrical abstraction of shadow and light. Studying distortions of perspective and the interplay between form and substance led him to become interested in kinetics. His methodical works create visual stimuli which were behind a "new, moving beauty”—moving in both senses of the word—announced in his 1955 Manifeste jaune (Yellow Manifesto) and theorised by his plastic alphabet, perfectly illustrated by this painting. He inscribed a simple geometric shape in a square background with ultramarine and cobalt violet nuances, chosen from his six favourite colours.

Abstract and Contemporary Art
Versailles - 3, impasse des Chevau-Légers - 78000
Versailles Enchères
Info and sales conditions
Catalogue
Newsfeed
See all news
Due to the summer holidays there will be a pause in the newsfeed. We will be back Monday, August 24th. Have a wonderful summer vacation!
Met Museum in New York acquires Wangechi Mutu sculptures
US House of Representatives vote to create a national museum dedicated to Latin Americans
Church volunteer confesses to starting the Nantes Cathedral fire
Not to be missed
Pre-sale
Figurative art from van Goyen to Combas and the inescapable…
This 1955 work by Bernard Buffet belongs to a series of around 10…
Pre-sale
Henri Lebasque, painting the zest for life
His soft, nuanced palette captures moments of simple happiness on…
Pre-sale
The Gilles Labrosse collection: fashion throughout the…
Amassed by an impassioned enthusiast, one of the largest private…
Pre-sale
Achille Laugé: Cailhau in perspective
Found during an inventory carried out for an estate in the Var,…