A Snapshot Choreographed by Edgar Degas

This pastel from around 1896-1899 is a study for a painting at the National Gallery of Art in Washington. 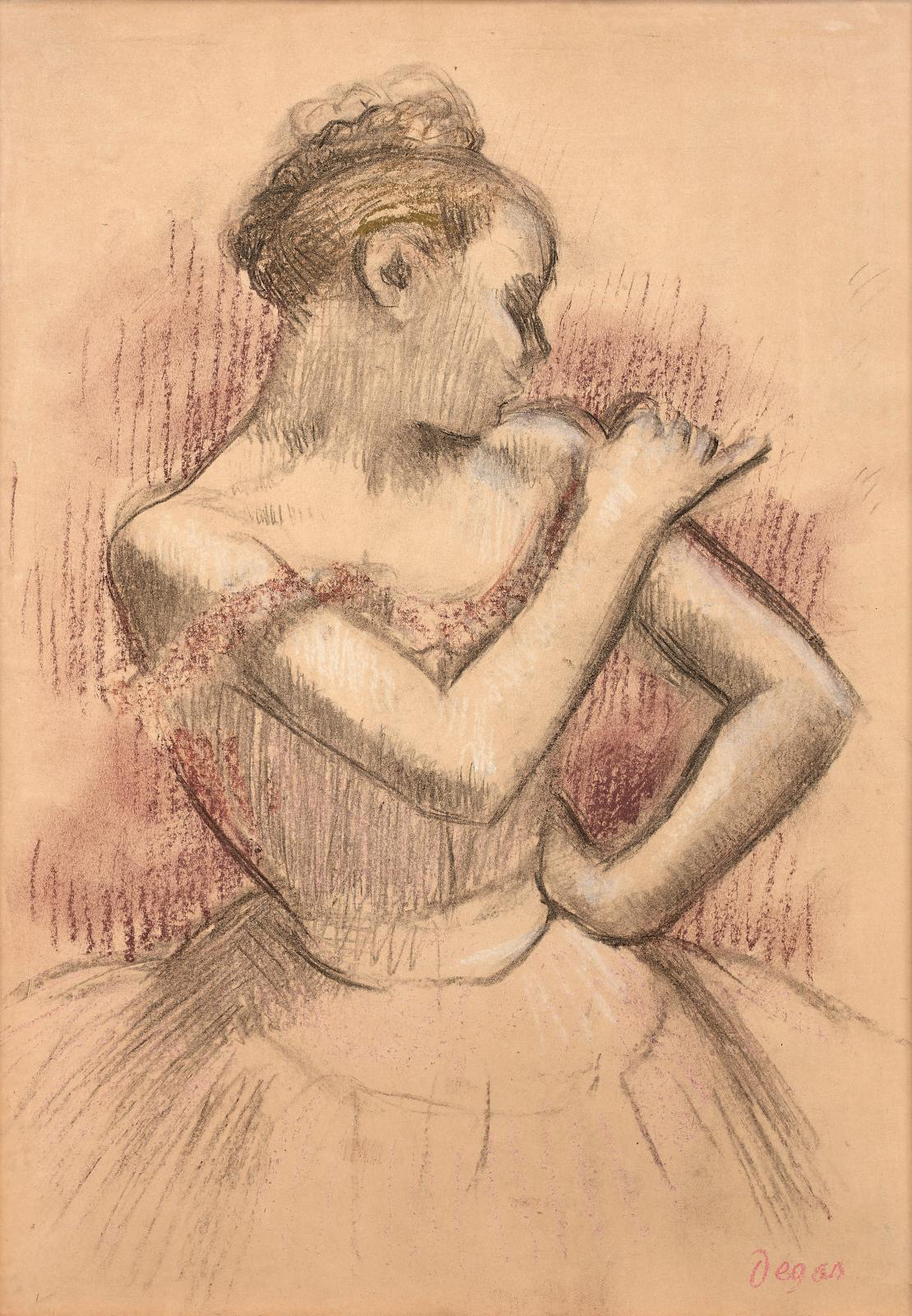 Aside from its undeniable charm, this pastel by Edgar Degas from the former Julie Reinach-Goujon collection is interesting for its relationship to an 1899 painting at the National Gallery of Art in Washington. It is a study for the girl on the left in Four Dancers, also known as Dancers in the Wings. The same black lines delimiting her silhouette and emphasizing the curve of her arm and her shoulder and back, while her face is just sketched, can be found in this drawing. The dancer matters more than the individual person. By creating strong contrasts, the stage lighting also helps highlight the body, to which Degas draws attention by sculpting its volumes and breaking down its movements. In the painting, the choice of bright colors for the shadows, and orange and green tones for the ankles in unison, the bodices and the tutus, further heightens the ballerinas’ presence. Through dance, Degas sought to study the effects of artificial light on poses and movements. The artist said he was no mere “painter of dancers”, as some people dismissed him as being, for beyond the charm of his subjects, his works are snapshots, as photographs can be. Indeed, he is known to have been fascinated by Eadweard Muybridge’s sequential photographs in his 1887 book Animal Locomotion. Degas himself dabbled in the medium between 1895 and 1896, enlisting his dinner guests as models for carefully lit staged shots. This pastel undoubtedly includes some of the lessons in chiaroscuro that he learned from those experiments. Degas went back to dancers after his foray into photography but never again set foot inside the Paris Opera House after 1892. His memories were enough for him to continue his quest. He had, after all, spent 177 nights there, a privilege that the institution’s new directors Eugène Ritt and Pedro Gailhard granted him in 1885 after a long struggle. From then on, Degas could walk through the famous door separating the auditorium and the stage. The dance foyer at the opera no longer had any secrets for him.

Precious snippets of this collection, from Delacroix to Rodin and Puvis de Chavannes, relate the passion of a learned family linked to the history of France and the art of its time. 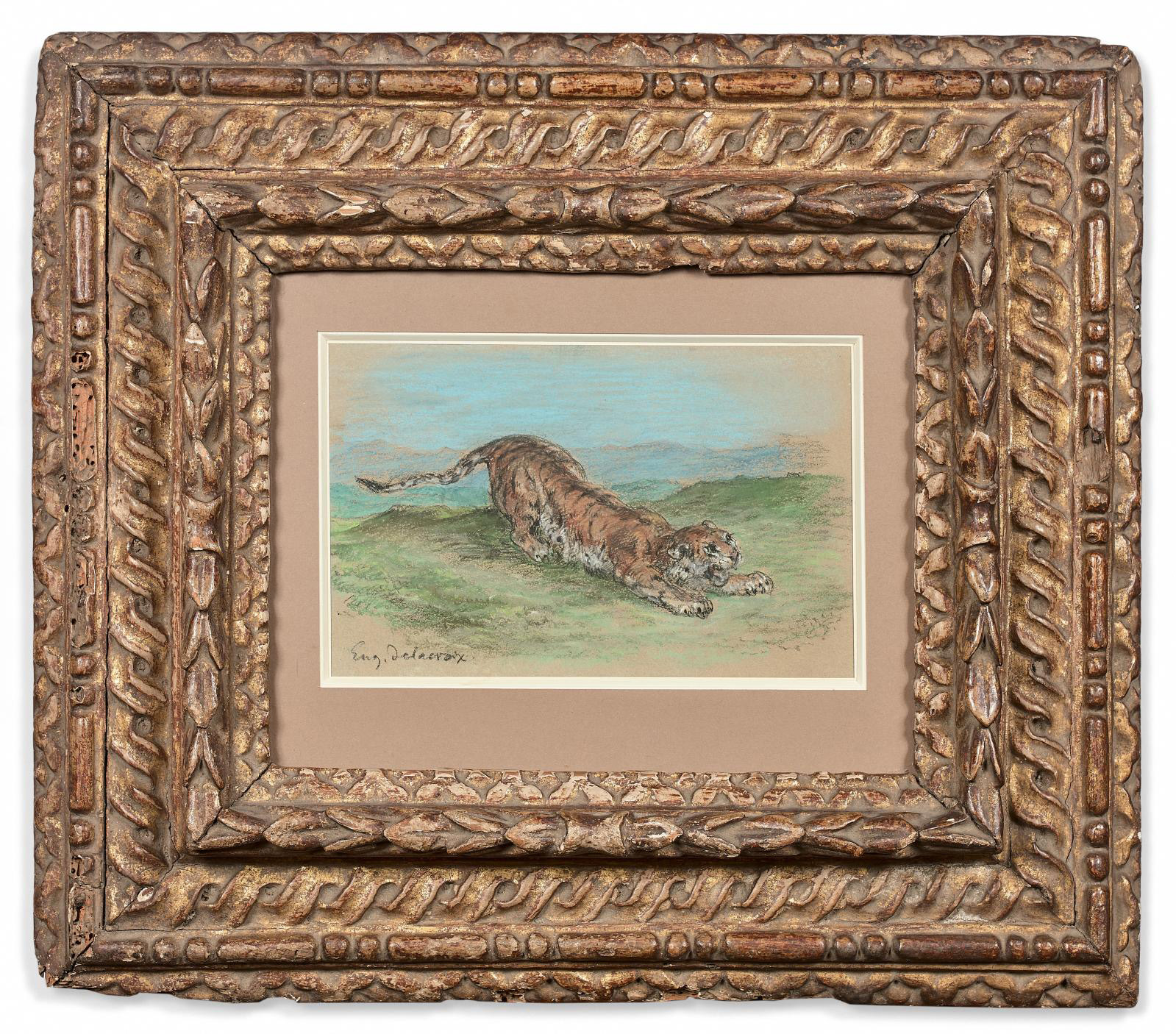 In a rare old photograph, Julie Reinach, standing in a black dress, is leaning over her husband Pierre Goujon, sitting at his desk. It is a moving image. Despite her self-control, the image reveals tenderness and expresses the couple’s love of art brought them together. Art historian and novelist Adrien Goetz wrote: "Pierre, whom everybody in the family loved, had married […] Julie […] Julie liked him because he inherited his family’s passion for painting." (Villa Kérylos, Grasset, 2017). That is the heart of the matter. This passion invites us to look back at the Reinach family’s destiny. On December 20, 2017 at Drouot, the same house sold a rare watercolor by Paul Cézanne, Intérieur de Forêt (Forest Interior), made around 1904-1906, featuring small, flat areas of blue and green. The light diffused by the drawing propelled it to the top: €6,875,000. It was already from the collection of Julie Reinach-Goujon (1885-1971). Today, 16 more drawings appear, including Edgar Degas’ magnificent pastel of a dancer. This rare work, a study for a painting at the National Gallery of Art in Washington, is conservatively estimated at between €100,000 and 150,000.

A Family Involved with Art
It all started in 1845, when Frankfurt-born Hermann Reinach (1814-1899), who made a fortune in banking in London, moved to Paris, the city he loved. He suffered some financial setbacks before launching out into the newspaper business and rebuilding his wealth, again thanks to banking as well as profitable railroad investments. Luck smiles on the bold: he married the woman he loved. The happy couple had three sons—Joseph (1856-1921), Salomon (1858-1932) and Théodore (1860-1928)—quickly nicknamed "JST" for “je sais tout” (“I know it all”) because they did so well in school. Salomon graduated first in his class from the École Normale Supérieure in 1876 and became a famous archeologist who wrote over 7,000 articles and almost 80 books. Théodore won the highest number of prizes ever obtained in the concours général, a very prestigious academic competition (19 prizes) and designed the marvelous Villa Kérylos overlooking the Mediterranean, built between 1902 and 1908. The Reinachs’ thirst for knowledge and faith in science were inseparable from their passion for beauty. Hermann was already a collector, mostly of Old Masters. A portrait of Madame du Barry by Charles-André Van Loo and a painting by Pierre Mignard are listed in the inventory taken after his death in 1899. Joseph, his eldest son, inscribed the family’s name in the history of France. Following in his father’s footsteps, he owned an influential newspaper, La République Française, and was close to progressive circles, especially the one revolving around Léon Gambetta. He entered politics and was elected to parliament several times. The great cause of his life was the fight against anti-Semitism. When the Dreyfus affair erupted, he wrote incisive articles ardently defending the captain wrongly accused of spying. His other passion was art. He frequently visited Drouot, buying a Fragonard here, a Rembrandt drawing there, etc. Pierre Goujon (1875-1914), an art critic who married his daughter Julie in 1905, often accompanied and advised him. Goujon also had a connection to painting: he was the model for Auguste Renoir’s Jeune Garçon en Costume Marin (Boy in a Sailor Suit)! In 1885 his father asked the Impressionist master to paint portraits of all his other children—more proof of open-mindedness. He and Julie began buying their own artworks. This wonderful story ended early in the First World War. Pierre was the first French parliamentarian killed in action. He left two works to France: Toulouse-Lautrec’s Rousse (La Toilette) and Van Gogh’s La Guinguette à Montmartre (both now in the Orsay Museum). Shortly afterward, Julie’s brother also perished in the war. When her father died in 1921, she inherited even more beautiful paintings. Endowed with financial power rivaling that of the Rothschilds or Camondos, to whom her family was connected, she continued purchasing with passion and common sense. She lived the same lifestyle as her high-society peers, traveling across Europe to soak up culture, and became interested in drawings by Degas as well as others.

Beautiful Drawings
Paintings are crammed next to each other on the walls of Julie Reinach-Goujon’s grand townhouse in Saint-Germain-en-Laye, still hanging in the same way that collectors liked to display them in the 19th century. They include works by Van Gogh, Corot, Rembrandt, Gauguin, Cézanne, Monet, Manet, Degas, Rodin and Delacroix. There are around 300 of them, and it would be hard to come up with a better list of names. On November 20 art lovers wanting to own one of these works will have the choice between some fine drawings in addition to the above-mentioned Degas pastel. The sale’s expert, Agnès Sevestre-Barbé, loves Le Tigre Prenant son Élan (Crouching Tiger), which she calls "an incredibly powerful little gem" (€80,000/120,000). The pastel is perfectly traceable: Dr. Goujon, Pierre’s father, bought it for 670 francs at the January 1883 Marmontel sale. What’s more, it is reproduced in the "Robaut", the reference for Eugène Delacroix (1798-1863). The author described it perfectly: "Nothing could be more supple than this noble animal poised to pounce, nothing more shimmering than its red-orange coat standing out against the soft, warm tones of sun-drenched grass. Misty hills fade away into a blue sky." Delacroix often sketched tigers, including several in this threatening pose. This one is very similar to the feline in Tigre et le Serpent (Tiger and Snake), an 1862 oil-on-canvas at the National Gallery of Art in Washington. Lion Debout, Lion Assis (Standing Lion, Sitting Lion), an 1846 ink drawing by the same artist (14.5 x 24.5 cm/5.7 x 9.6 in), expresses the strength of his line. In a few pen strokes, the king of the jungle increases in volume and power (€8,000/12,000). In a very different vein, after noise and fury comes calm and voluptuousness with La Cueillette des Figues (Picking Figs) by Pierre Puvis de Chavannes. This 1879 red chalk drawing, modestly estimated at €2,000 to 3,000, features two women draped in ancient style. The one on the left is leaning on a basket, like, with some slight variations, the central figure in his large 1873 painting L'Été (Summer) in the musée d'Orsay. She appears again in Récolte des Pommes (Picking Apples), painted around 1890 (Smithsonian American Art Museum, Washington). Bertrand Puvis de Chavannes, the painter’s great-great-nephew and a specialist on his work, explained to experts, “Sometimes Puvis reused red chalk figures created earlier for one or another of his paintings. His completed drawings were intended for his dealer or to be given as gifts."

A brisk sketch made by Auguste Rodin with a few pencil strokes and watercolor washes concludes this small but intense selection. Femme Nue Penchée en Avant (Nude Woman Leaning Forward), estimated between €6,000 and 10,000, attests to the skill of a great master who said that his "natural means are earth and pencil… I’ve drawn all my life. I started my whole life drawing and never stopped." That echoes the Reinachs’ work. They never stopped collecting.

To be sold as part of Mr. G.'s estate on behalf of the Fondation de France, this panel by Marten Van Cleve is one of his highly successful scenes inspired by Pieter Bruegel the Elder. 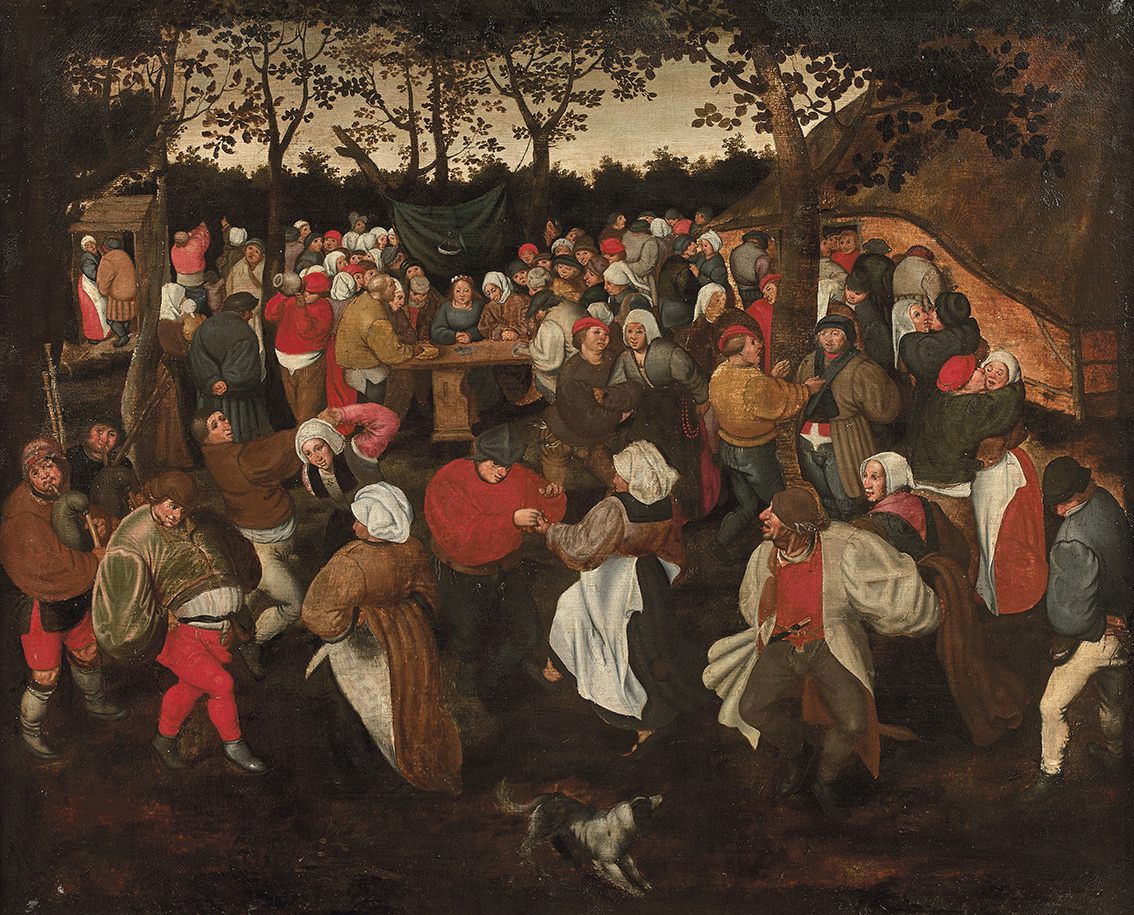 Dancers, drinkers and musicians are seen merrily celebrating in a tree-lined square at the wedding of a young village woman (dressed in dark clothing, as was the custom). They crowd around her and the table, on which sits a dish full of coins: gifts from the guests. In the background, some are not joining in the festivities: a couple are seen making love in a cabin, while in the foreground on the right viewers can hardly miss the titillating detail of a man relieving himself. The painter of several compositions on this highly popular theme in Flemish art during the second half of the 16th century, Marten Van Cleve—a member of the Antwerp guild—took inspiration from the art of Pieter Bruegel the Elder (1525-1569), two years older than him. This is particularly illustrated by a painting dated 1566, now in the Detroit Institute of Arts, and also known through the engraving by Pieter Van der Heyden. But while the couples in the foreground and the large thatched house are identical, the bride's table and the green canopy embellished with a hanging crown have moved forward from the background into the middle ground. The palette of dark greens, reds and browns gives depth to this scene full of vitality and zest for life. Social distancing and lockdown were not part of the language of those times…

[LIVE AUCTION] Modern drawings & paintings, antique paintings
12, rue Drouot - 12, rue Drouot - 75009
Touati - Duffaud
Info and sales conditions
Catalogue
Newsfeed
See all news
Director-General of UNESCO Audrey Azoulay Calls to Save Ancient Ruins of Carthage
A Vandalized Portrait of Napoleon III Goes Under Restoration in Toulouse
Calling all Architects: A Competition for 19 "Follies" in Neuilly-sur-Seine
An Exhibition puts Enameled Glass in the spotlight at the Château d'Ecouen
Not to be missed
Pre-sale
Eugène Delacroix: An Impassioned Believer
Eugène Delacroix (1798-1863) was deeply attached to religion and…
Pre-sale
The Strasbourg Jugendstil from Oberlé to the Treser …
Art Nouveau or Art Deco ? It is hard to say, since this silver bowl…
Pre-sale
Olga de Amaral’s Textiles: Halfway Between Colombian…
Rare on the European market, the work of Colombian artist Olga de…
Pre-sale
The Broken Lines of Designer Eugène Printz
This striking commode, with its suspended body and brass volute…