Celebrating its tenth anniversary, the Centre Pompidou-Metz, an outpost of the Paris Musée d’art Moderne et Contemporain, immerses us in a wide-ranging exhibition revealing an intangible utopian world, through the works of Yves Klein and his contemporaries. 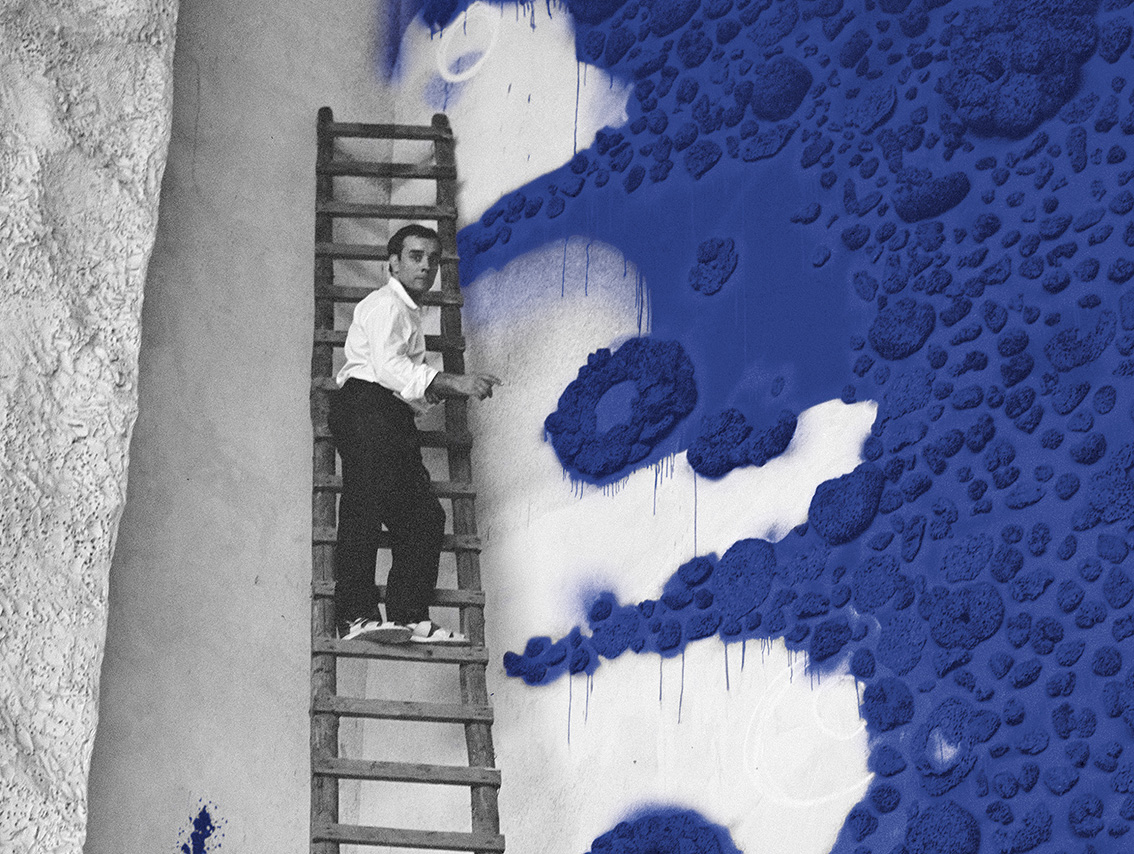 Yves Klein, the iconic figure of New Realism movement (founded in 1960), seems to have been on a roll in France since 2019. With various retrospectives and thematic exhibitions, institutions like the Musée Soulages (Rodez) and the Laiterie du Domaine des Étangs, in the south-west, have been striking while the iron is hot. However, under the leadership of its former director Emma Lavigne, the latest to date, at the Centre Pompidou-Metz, is presenting his work in the light of his contemporaries. As the curator tells us, in the context of a Europe tragically devastated by the war and a general movement towards "dematerialisng art", an entire generation of international artists, with whom the Nice-born Klein had affinities, sought to "reinvent a new way of being in the world." Here we see a comparison of Klein's work with those of thirty-four artists, who include members of the German group ZERO, the Japanese Gutai movement and the Netherlands NUL group, as well as Italian spatialists.
The circuit consists of nine sections, in turn evoking ruins, the body, the omnipresence of white, "spatial" and "plastic" concepts, "architecture of the air", "theatres of the void" as well as the colourful, cosmic and cosmogonic visions shared by the artists. It opens with the visual shock created by two impressive paintings, Anthropophagie bleue by Yves Klein (nicknamed Monochrome Yves), and Chizensei Kirenji (The Chinese fighter Du Xing aka Demon Face) by Gutai founding member Kazuo Shiraga: both works imbued with the same rage to be done with the chaos of a grief-stricken world. This gestural and chromatic fury is followed by a realm of peace, silence and infinite space, seen through the interstices of "white zones", represented by Enrico Castellani's magnificent painting Superficie angolare bianca (White Corner Surface) no. 6.

A rich and detailed exhibition
Throughout this show, elegantly staged by Laurence Fontaine with skilful effect, visitors become aware of the artists' gradual move away from the rigid confines of the canvas. Piercing, cutting and burning it, as witness works by these" artistic pyromaniacs" (like Alberto Burri's melted plastics), they open the way to a sphere of new aesthetics: those of an "afterworld" represented by emptiness, air, light and the cosmos, as can be seen in Otto Piene's brilliant installation Lightroom with Mönchengladbach Wall. In proposing a different, contextualised approach to his corpus within an international group, the current president of the Palais de Tokyo in Paris, overseeing her last exhibition at Pompidou-Metz, has achieved a considerable feat. On the walls of the great hall, this rich and detailed exhibition highlights endless links between the body and the sky, shadow, colours, light, empty space, an endless utopian architecture, the tangible and the intangible, which might sometimes leave novice art lovers feeling a little lost. Nonetheless, these installations, canvases, photos, videos, drawings and models with their political, philosophical and environmental messages, as well as the immersive displays, all create a solid and "sensitive" group.

"Sky as a studio. Yves Klein and his contemporaries", Centre Pompidou-Metz, Metz.
Until 1st February 2021.
www.centrepompidou-metz.fr

That's all, folklore! at the Centre Pompidou-Metz
Newsfeed
See all news
€90,000 for a 1968 Olympic Torch
Judy Chicago’s Vibrant Smoky Artwork Has Been Canceled
Pioneering Conceptualist Felix Gonzalez-Torres Set to Take Over Barcelona
The World’s Most Comprehensive Bach Website is an Israeli Man’s Passion Project
Not to be missed
Exhibitions
"Œuvres Choisies": An Imaginary Menagerie and More
You never know what awaits you in an "Œuvres Choisies" exhibition,…
Exhibitions
The Need for an Art of Living
Gathered and restored over ten long years, the collection currently…
Exhibitions
Claude Viallat: Still Going Strong
A new show again attests to 85-year-old French artist Claude Viallat…
Exhibitions
Happy Birthday Ropac Gallery!
t he Thaddaeus Ropac g allery was founded in Salzburg in 1983 and…