At the Musée d'Ornans in the Doubs, the Franco-Chinese star of contemporary painting is engaged in an unprecedented face-to-face encounter with the leader of the Realism movement. 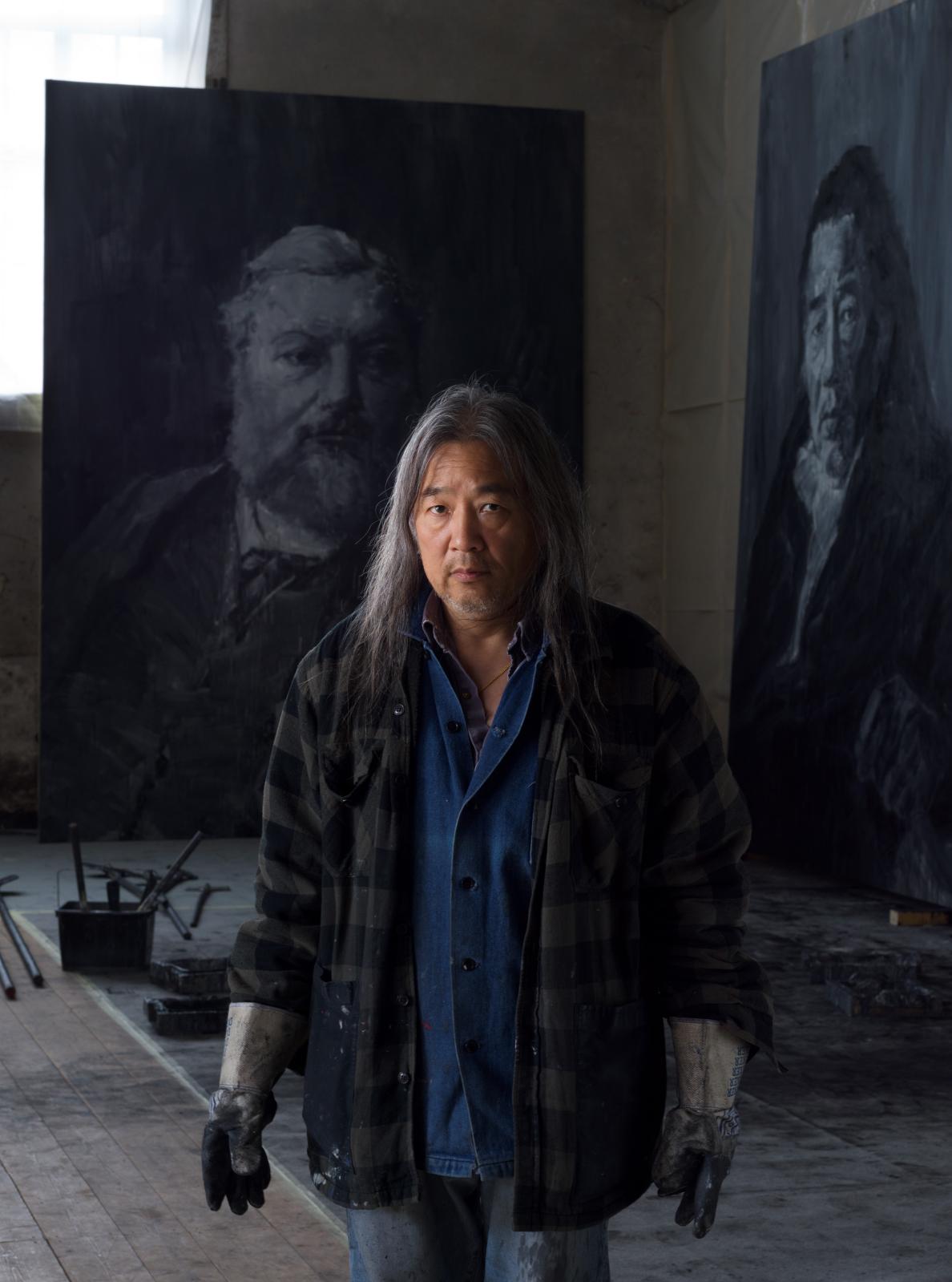 In an exhibition labelled of national interest by the French Ministry of Culture and the highlight of the celebration of the bicentenary of Gustave Courbet's birth, Yan Pei-Ming confronts about 15 of his works with some 20 emblematic paintings by his forerunner. Nearby, in Courbet's last studio, he also presents four works he painted on the spot: a landscape, a huge bestiary (East of Eden), a portrait of the master at 58 and his self-portrait at the same age. Despite the generations between them, large formats, powerful gestures and energy are common to both artists.

After Leonardo da Vinci and Caravaggio, you’re dialoguing with Courbet. Why him?
They are different approaches each time. Mona Lisa was the starting point for my work Les Funérailles de Monna Lisa (Mona Lisa's Funeral, 2009). By revisiting the famous painting in the dynamics of a reflection on filiation, the undisputed icon of the Louvre Museum was caught up in the relationship between a father and son, both between life and death. The idea was to bury a myth and resurrect it through painting. For my "Roma" exhibition at the Villa Medici in 2016, we had the idea, with Henri Loyrette (editor's note: the exhibition’s curator), of tackling Rome’s past, and therefore, necessarily, its masterpieces. We immediately thought of Caravaggio as our way in, but obviously couldn’t borrow The Martyrdom or The Calling of Saint Matthew from the church of San Luigi dei Francesi. So I reinterpreted them by faithfully reproducing their format but moving away from the chromatic palette. With Courbet, I was guided mainly by questioning what Realism is.

Is working in the studio where Courbet painted from 1860 to his exile in Switzerland in 1873 exciting or, on the contrary, intimidating?
When I visited it, I had trouble realising that I was in the workshop of the great Gustave Courbet. It was a pretty intense feeling. I immediately wanted to work there and make paintings especially for the place. Its volumes - originally those of an old foundry - are really superb and, with the adjoining house, all the conditions to do a residency there were met. Beyond the excitement of painting in this special place, it’s also an opportunity to pay tribute to all those who have worked there since the beginning and to the beautiful initiative of the Doubs department, which has just bought it. It’s a powerful project, both symbolically and politically: to give his workshop, and therefore a part of his soul, back to Ornans for the bicentenary of the birth of its native son. It also means considering the renovated museum and the workshop as a whole.

Do you paint like Courbet almost every day?
The work of painting is a daily job. There is really this notion of "hard work". I paint every day, except when travelling. So often, for practical and material reasons, I do watercolour because it’s easier to transport. I’d say my work is committed: it depicts a certain personal, often dark vision of the world.

"Everyone in China knew Gustave Courbet. He was mainly shown in art magazines as a revolutionary artist."

You discovered Courbet, who is very popular in China, during your studies in Shanghai.
Everyone in China knew Gustave Courbet. He was mainly shown in art magazines as a revolutionary artist. His image was very closely linked to that of the Paris Commune, but I really discovered him when I arrived in France. I was very impressed by his large-format works, such as L’Atelier du peintre (Painter’s Studio) and Un enterrement à Ornans (A Burial in Ornans), which were then on display at the Louvre Museum. I had the impression that one could physically enter the painting. This is even more striking in L’Hallali du cerf (Killing a Deer), where the dogs look almost life-size and are incredibly lively! Courbet shows all the pictorial possibilities offered by painting.

Your earliest works were large, passionately painted portraits. You describe your approach as "attack, determination, which has a spiritual, moral but also critical meaning".
It wasn’t easy to get into figurative painting in the middle of a period of minimal and conceptual art. It’s always been very important for me to express myself through a defined subject, whereas for abstract artists the act of painting is the subject itself. I had to fight to assert my work, to get out of my apprenticeship, which was very classical, and to feed off these new pictorial expressions in order to blaze my own trail over time. The journey then led me to what I call "anti-portraits": imaginary and unidentifiable portraits that look like no one. By reinterpreting portraits of Mao, an unavoidable, immediately recognisable, larger-than-life figure, in their official format, I put the subject back at the centre of the painting while deconstructing its evidence with a subversive pictorial gesture.

Why are two crocodiles close to Courbet's Le Sommeil (The Sleepers) also known as Les Deux Amies (The Two Friends)?
In the exhibition, Le Sommeil is associated with, among other things, the pair of crocodiles in my painting Wild Game: The Way of the Crocodiles. These two works painted in sinuous poses highlight two different forms of animality. Courbet was often accused of painting women with opulent shapes, too different from the canons of the time. They were compared to Percheron horses close to the animal condition.

Courbet's art has been called "realistic". You said there is no "true reality or absolute reality, no lies either".
Painting is a hypothesis, a possibility of otherness. It is a necessarily empirical, interpreted vision of an external reality. The painting carries its own pictorial truth in itself. It simply is neither true nor false.