This rare humanist manuscript dating from the reign of French King François I features remarkably preserved illuminations depicting the life of David. 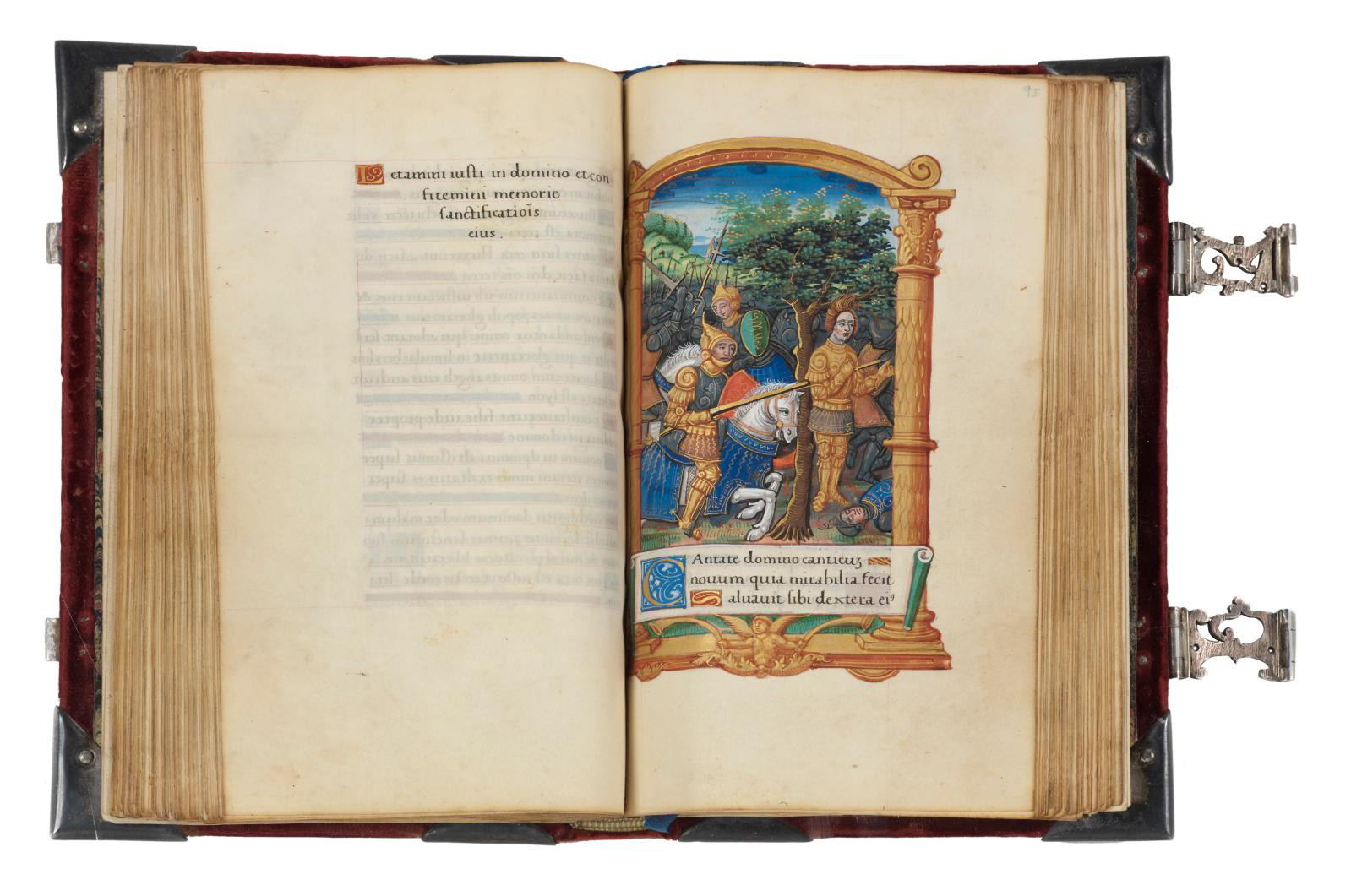 Our psalter takes us back to the reign of François I, a time when private devotional books became lavishly illuminated works of art. It is called a ferial psalter because the 150 psalms are spread out over seven daily readings so that each is recited once a week. The word ferial comes from the Late Latin feria, which means “day of the week”. This liturgical object is the cornerstone of the divine office. The texts were copied by the steady and careful hand of a calligrapher in a Roman script called humanist minuscule, which humanists in Italy invented to copy secular works. Also known as littera antiqua, its origins lie in the formal purity of Carolingian minuscule, which 15th-century humanists adapted to transcribe ancient texts. The goal was to highlight the subject matter with clarity and elegance.

Sixteenth-century inscriptions link the manuscript to a prestigious Bourbonnais dynasty, the Urfé, who were known for their love of books. It was undoubtedly commissioned by Claude d'Urfé (1501-1558), the royal governor and bailiff of Forez, who owned a collection of precious books at his château de la Bâtie. Father Louis Jacob mentioned it in his Traité des plus belles bibliothèques publiques et particulières (1644) (Treatise on the Most Beautiful Public and Private Libraries): "[…] il dressa une splendide et riche bibliothèque dans ce chasteau, où il mit plus de 4 600 volumes, entre lesquels il y avoit deux cens manuscrits en velin, couverts de velours verd." (He created a splendid and rich library in this castle, where he put over 4,600 volumes, including two hundred manuscripts in vellum covered with green velvet.") An old inventory indicates that three psalters were in the collection.

This one has all its miniatures, including seven full-page illuminations. They are in a remarkable state of conversation, their shimmering colors having lost none of their brilliance. Rather than illustrating the psalms’ content, as might be expected, they depict episodes from the life of David related in the Book of Kings. Popular during the Romanesque period before falling into disuse, this iconographic cycle attests to the Biblical erudition that guided the production of this 16th-century work. Most of the illuminations are by the main executor of the Statuts de l'ordre de Saint-Michel (Statutes of the Order of Saint Michael) commissioned by François I. The illustrious but anonymous artist must have worked with Étienne Colaud, himself an illuminator, but also a bookseller, who seems to have coordinated the work’s production. The Parisian illuminator of this psalter illustrated around 12 manuscripts between 1518 and 1531, to the great delight of bibliophiles past and present.

Karen Matevosyan, Guardian of the Matenadaran
Newsfeed
See all news
Rubell Museum to Expand with Second Collection in Washington D.C.
Ancient Ceremonial Artifacts Found at Egypt’s Temple of the Pharaohs
The Villa Albertine Opens in New York
Colnaghi Gallery Prolongs Exhibition Exploring Connections between Spanish Art and the New World
Not to be missed
Spotlight
The Virtuosity of Flemish Manuscript Illuminators Radiates…
The art of the miniature reached such heights in 15 th -century…
Spotlight
Raden Saleh: A Dialogue Between East and West
Two cultures meet in the work of Raden Saleh, the Javanese painter…
Spotlight
A Table Commemorating the Liberation of France by the…
Mystery shrouds this unique, previously unknown table made in 1947…
Spotlight
A Treasure of Gold Coins Found in Brittany
In 2019, a couple and three stonemasons found a trove of coins dating…