The Tranquility of Amphitrite According to Michel Anguier

The sea goddess’s graceful pose emanates great serenity. This bronze is one of Michel Anguier's "best-sellers", appreciated by connoisseurs of both his time and today, who will soon be delighted to see it at auction. 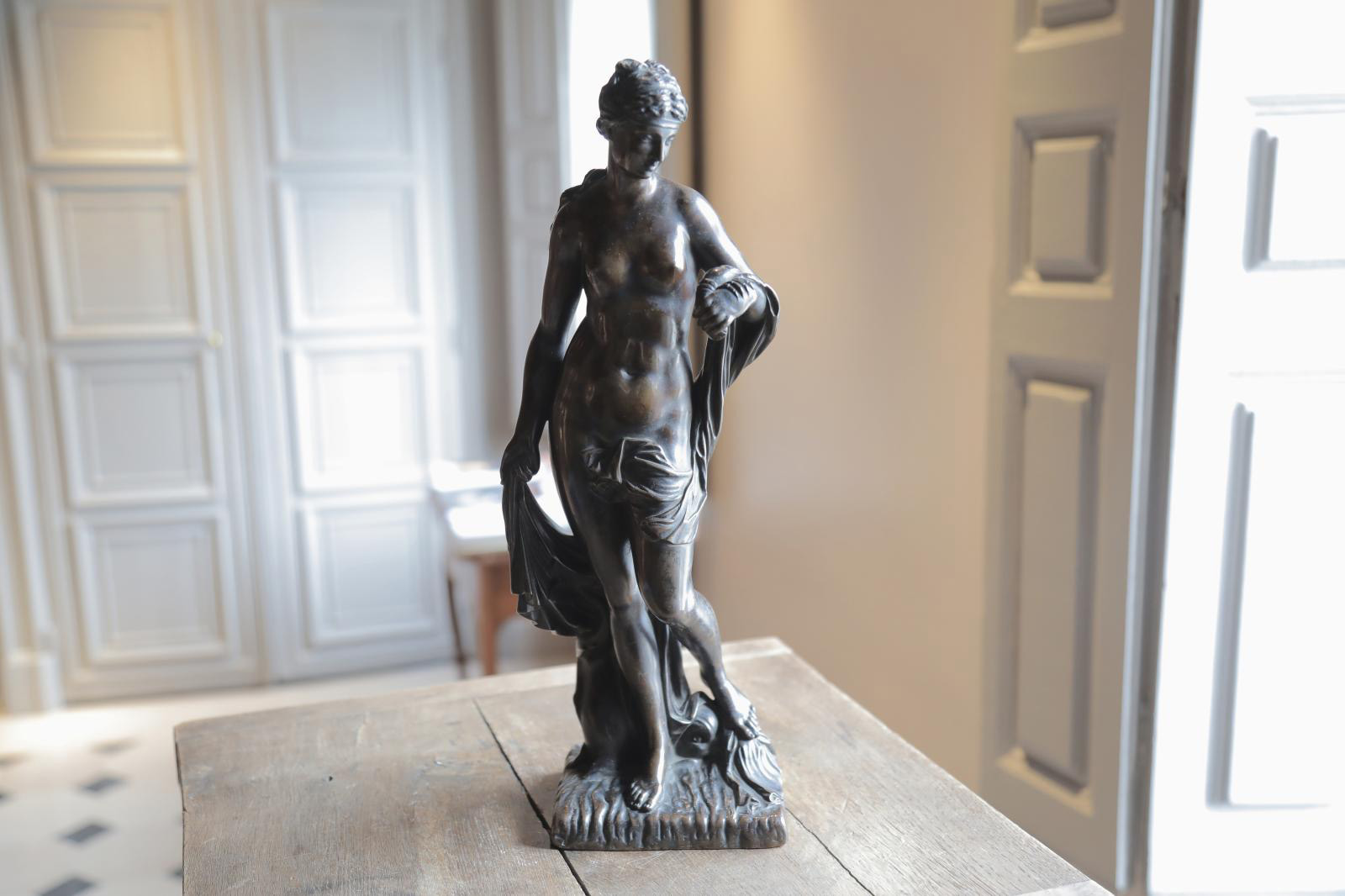 Like her 49 sisters, Amphitrite, daughter of Nereus and Doris, was a Nereid. She reigned over the salty waters alongside her husband Poseidon, the Greek god of the sea and oceans. In antiquity, she was usually depicted with him standing on a chariot pulled by seahorses, preceded by her son Triton playing a conch shell. Even in Roman times, when countless variations and inventions enriched mythological iconography, she was seldom shown alone in stone and mosaics. That type of representation came into vogue during the Baroque period when 17th and 18th-century artists made use of her solitary—and barely veiled—figure to grace parks and ponds. In this context, she often held a fish to differentiate her from another nude deity (Venus, for example). The smiling bronze Amphitrite here also provides clues to help identify her: the water flowing from the socle, the dolphin between her ankles and the lobster clinging to her wrist.

This sculpture is not unknown. It was even a great classic during the reign of Louis XIV, known as the Tranquil Amphitrite. This version is by Michel Anguier (1613-1686), one of the best artists of the time. After a long stay in Rome from 1641 to 1651, he returned to Paris, where he worked for leading patrons, including Anne of Austria and the Sun King's minister Nicolas Fouquet, and carved the reliefs on the Porte Saint-Denis and the high altar of the Val-de-Grâce Church in Paris.

Versions of a Highly-Regarded Sculpture
In 1652 Anguier made a series of statues of gods and goddesses. His biographer, Guillet de Saint-Georges (1624-1705), wrote that he produced "models of six figures, each eighteen inches high, that were cast in bronze and depict [...] a Tranquil Amphitrite [...]. They are now in the possession of Mr. Montarsis, the king's jeweler." Of these, the Amphitrite became the best known and most sought-after by collectors, even during Anguier's lifetime. It was soon reproduced in various materials and sizes, contrary to the custom of the day, which was to reduce the original’s scale.

Two large marble versions are known. The first was commissioned by Fouquet, the second was sculpted by Nicolas Massé in 1680 for Versailles. It is now in the Louvre. Some bronze casts of Tranquil Amphitrite are also known, starting with the "large versions" (h. 53 cm, 20.86 in), a fine example of which is also in the Louvre. The "small versions" (h. 37 cm/14.56 in) include an illustrious representative among the treasures of the Green Vault in Dresden. That is the category to which the figure reappearing today belongs, one of the most accomplished series in terms of the carving’s quality. A new patina appears to have been applied in the 19th century, but we can affirm that this is a very beautiful cast from the 1700s.

Sculpture in the Spotlight with an Anonymous Christ

By the Pond with François Pompon