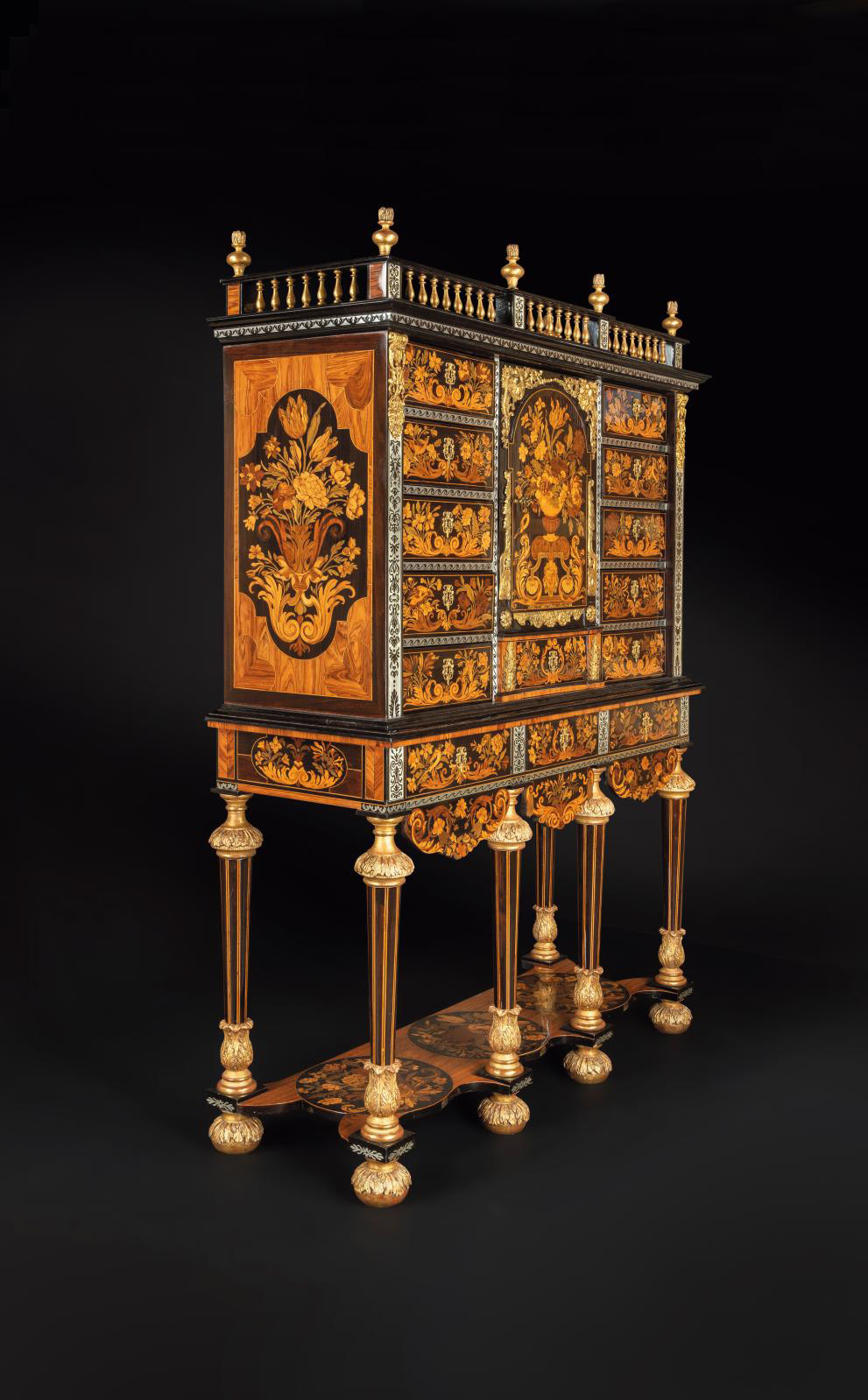 The paths taken by the BTP (Buildings and Public Works) can lead to new heights. After making a tidy fortune in this sector, the unobtrusive and cultured René Simeoni took delight in assembling a collection of 80-odd pieces of 18th-century furniture, which he found with leading Parisian antique dealers in this field. He kept this collection in his home in Yvelines, and it was discovered during a standard estate inventory by Hugues Taquet, an auctioneer based in Mantes-la-Jolie. Taquet admits that he had absolutely no idea it existed, but immediately felt "certain that he was seeing some extraordinary pieces of cabinetwork." And the signatures were a positive dream, lining up three of the most outstanding names of the time—notably Bernard II Van Riesenburgh (c. 1705-1766), the famous BVRB, the creator of two writing tables in tulipwood and kingwood marquetry: elegant pieces each estimated at €30,000 to €50,000. These are called "à la Pompadour" because an absolutely identical example can be seen in François Boucher's famous painting of the Marquise (Alte Pinakothek, Munich). But above all, we find a folio cabinet by the master with an impeccable pedigree, classified as a historical monument, with an estimate of €200,000/300,000. This iconic, historical piece of furniture was made for the library in the private mansion of Jean-Baptiste de Machault d'Arnouville (1701-1794), Louis XV's controller-general of finances. For the record, the Comte—known for his love of marquetry, bronzes and mounted porcelain—owed this prestigious post precisely to the influence of the royal favorite.

Boulle and the Birth of Great French Furniture
André-Charles Boulle was active almost a century earlier. The cabinet attributed to him here, in marquetry of various woods, was bought from Jean Gismondi in 1991, and shows a lesser-known facet of his talent. While everyone is familiar with the tortoiseshell and brass marquetry to which he gave his name, not many know that "he began his career with furniture in veneer wood", nor that "very few of his pieces of this pivotal period around 1670 are identifiable," says expert Pierre François-Dayot. During the Château de Versailles' exhibition in the winter of 2014-2015, "XVIIIe, aux sources du design, chefs-d'œuvre du mobilier 1650-1790" ("The 18th Century, Source of Design: Masterpieces of Furniture 1650-1790")—an event that made a deep impression on all visitors and several specialists—an identical piece of furniture was presented. Historian Calin Demetrescu wrote the notice for it, a study Pierre-François Dayot used to attribute this piece to Boulle: "its total twin in terms of iconographic characteristics." He particularly mentions "the central motif of the vase of flowers on a base", because though this type of decoration is fairly common, the presence of "two volutes and a bird" stands out with both cabinets. There is still much to discover about this fertile period of the decorative arts, as well as the cabinetmakers who lived in the galleries of the Louvre—Boulle and Alexandre-Jean Oppenord—and those of the Garde-Meuble de la Couronne: Pierre Gole, César Campe and the Gaudrons. These fascinating delvings take us back in time and show that all these craftsmen, French by birth or later naturalized, Catholics and Protestants alike, lived in peace and harmony, although of course, it is true that they were lucky to enjoy a privileged status as officers of the King's establishment.

A Fine Parisian Piece
René Simeoni definitely knew how to pick furniture of major importance, as witness a Coromandel lacquer commode with darkened wood frames, duly stamped by Pierre Roussel (1723-1782), admitted as a master in 1745 and a member of the famous dynasty of 18th-century cabinetmakers. Established in Rue de Charenton, in the Faubourg Saint-Antoine, at the sign of "L'image de Saint Pierre", he led a long and exemplary career, working for the Prince de Condé and supplying furniture to the Palais Bourbon and the Château de Chantilly. His commode, estimated at €50,000/€80,000, came from the collection of the Comtesse Edmond de Fels (1865-1943), then that of her daughter Edmée, who became Duchesse de la Rochefoucauld (1895-1991) by marriage. The sale of her estate was conducted in Paris by Mr. de Ricqlès on 23 June 1993. The piece then went to Maurice Segoura's gallery, where René Simeoni acquired it, because, as the expert tells us, "he had very close ties with various dealers and not coming from a family of collectors himself, he trusted them."

While lacquered commodes with sinuous forms, curved uprights and arched legs are quite common, this one is rare because of its Coromandel lacquer panels. In the hierarchy of 18th-century lacquers, those from China were the most widespread, those from Japan were precious and expensive because they were harder to find, and those known as "Coromandel" were highly sought after, because they were colored and in relief. Lazare Duvaux (1703-1758) was one of the marchands merciers (mercantile merchants) who offered them to his customers. We can cite two "five-legged" commodes (162 cm/63.8 in.) delivered to the farmer-general Laurent Grimod de La Reynière (1734-1793), one in 1748, the second in 1753. His Livre-Journal, published in 1873 by the Société des Bibliophiles Français (Society of French Bibliophiles), provides valuable testimony on the Paris trade between 1748 and 1758, with copious details. As we know, from the 1730s, the vogue for chinoiserie swept through the whole of France, and panels from screens and chests were dismantled and fixed to pieces of furniture, giving rise to a new fashion. Coromandel lacquer (which though Chinese takes its name from the southern coast of India, from where it was shipped to Europe on the ships of the East India Company) provided decoration carved in a thick material consisting of lime, clay and varnish, colored in white, dark purple, turquoise, green, red or bright yellow. Its relief and wide range of lively colors were a real invitation to decoration. The downside of this shimmering technique was that it was very difficult to work. Only a few tried, including BVRB of course, and Pierre Roussel. This was confirmed by his post-mortem inventory, drawn up on March 12, 1783, which mentions that "a good number of furniture items were made of lacquer, some in red lacquer, others in false lacquer or modern varnish." And as a result, says Pierre-Yves Dayot, this commode has "a strong presence" and will hardly go unnoticed.

The Bernard De Leye Collection: The Quest for the Exceptional
Newsfeed
See all news
Refik Anadol Now Represented by König Galerie
Steady Sales Reported at Art Basel
Nigerian Artists Offer Donated Works to British Museum in Return for Benin Bronzes
$30M Frida Kahlo Self-Portrait Set to Break Records
Not to be missed
Spotlight
A Book of Hours for England reflecting the virtuosity…
The art of the miniature reached such heights in 15 th -century…
Spotlight
A Table Commemorating the Liberation of France by the…
Mystery shrouds this unique, previously unknown table made in 1947…
Spotlight
A Treasure of Gold Coins Found in Brittany
In 2019, a couple and three stonemasons found a trove of coins dating…
Spotlight
Binoche et Giquello Present a Giant Triceratops Called…
Thrusting out its emblematic skirted skull and sharp horns, this…