The Emperor’s Gold: Treasures of the Banque de France

Spanning 25 centuries of history, the numismatic collection of the Banque de France is particularly well endowed with Napoleonic coins and medals, some of which will soon be on display in Paris as part of the "Napoleon" exhibition. 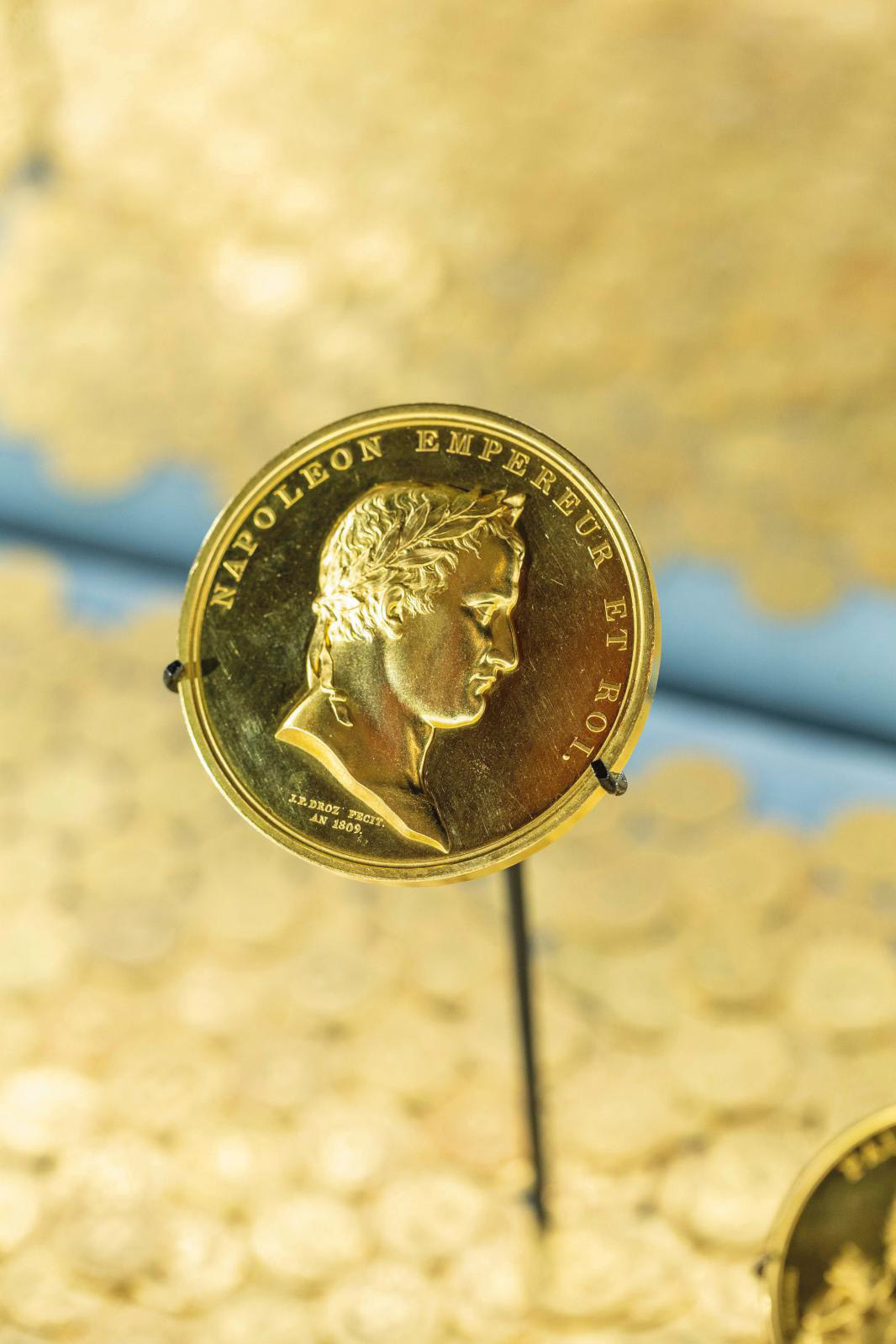 To penetrate into the inner sanctum, you must first show your credentials, exchange your ID for a badge, pass through an armored security gate, walk through wide corridors and descend deep into the building’s bowels until at last reaching a mysterious red double door. Once the ornate, artistic covers concealing the lock are located, the yellow and black keys, each held by a different person, are turned; the lock clicks. Heavy, 1,850-kilogram steel doors swing open into a huge, empty, dimly lit room: the secret place where the Banque de France houses its treasures. The few visitors come face to face with a monumental clock—perhaps to recall that, as Benjamin Franklin said, "time is money"—a scale for weighing bags and two deep coin scoops. For a long time, this underground chamber designed by architect Alphonse Defrasse in the 1930s was a place where wealthy customers stashed their securities. Ten years ago, it was turned into a museum that very few people know about. An even row of wall cabinets divided into small compartments house rare objects. Arnaud Manas, head of the heritage and archives department, takes out a velvet tray of Napoleon's personal medals from one of them.

Napoleon, Man of Many Medals
“L’Égypte conquise” (“Conquered Egypt”, 1798), “Couronnement et sacre” (“Coronation and Consecration”, 1804), “Serment de l’armée d’Angleterre au camp de Boulogne” (“Oath of the Army of England at the Camp of Boulogne”, 1804) and “Bataille de la Moskova” (“Battle of the Moskova”, 1812) are some of the precious pieces that are impressive for their perfect design by the finest engravers of the time, including Brenet, Andrieu, Jeuffroy and Droze, as well as for their brightness, which remains untarnished because they have never been in circulation. “Like Louis XIV and, even more so, the Roman emperors,” says Mr. Manas, “Napoleon liked these symbols, which he gave away as diplomatic gifts or rewards. In his 15 years in power, he had hundreds of them struck. We’ve got about 40, most of which were bought at the large Leu Bank auction in Zurich in 1974 and 1975.” Advised by Superintendant of Fine Arts, Dominique Vivant Denon, the First Consul and Emperor-to-be considered these medals an ideal propaganda tool. The bronze ones were widely distributed to soldiers and bystanders, for example at the festivities celebrating Napoleon’s wedding to Maria-Louisa of Austria. “The medals show Napoleon as a strategist, a conqueror and a builder,” says Paul Froment, curator of the Coins, Medals and Antiques Department at the Bibliothèque nationale de France. “They commemorate events that brought prosperity to France.” Very few were struck in gold or silver. Besides their intrinsic worth—56 to 260 grams of pure gold each—their historical value is priceless. “They’re unique,” says Mr. Froment. “Not even the BnF (the French National Library) has any: three-fourths of the Napoleonic medals in their collection were stolen during a burglary in 1831.”

A Remarkable Collection
These rare pieces will soon be on display during a blockbuster show at La Villette marking the bicentenary of Napoleon’s death organized with the RMN-Grand Palais. In addition, the Banque de France owns an impressive, wide-ranging collection of Napoleons and 30,000 other coins, the oldest of which date back to the sixth century BCE. Cyrus the Great, founder of Persia’s Achaemenid Empire, features on a silver hemistater; a daric depicts Xerxes I, from the same dynasty, as an archer; the handsome profile of Philip II of Macedonia appears on a tetradrachm with the Owl of Athena on the reverse, which circulated all around the Mediterranean rim; and the Parisii are portrayed on a gold stater—among Gaul’s most beautiful coins and one that fascinated the Surrealists. The trip back in time continues with bronze sesterces depicting Nero, Marcus Aurelius, Commodius and Constantine the Great. Next come Pippin the Short’s monogram on a silver denier, one of the first coins minted by Charlemagne; the gros tournois of Saint Louis; the petit royal of Philippe the Fair, who sparked an outcry by decreasing the silver content in coins; the wonderful agnel d’or of Charles IV; and John the Good’s “horseback” franc, which was used to pay the king’s ransom after the English took him prisoner at the Battle of Poitiers. “The collection is outstanding,” says Jean-Yves Kind, who is in charge of French coins at the BnF. “There are stunningly beautiful examples of extremely rare pieces.”

Fakes and Rarities
The collection also has some audacious fakes, like the “Hugues Capet deniers” forged by the brilliant Louis Farigault (1860-1942), a colorful artist, collector and incredibly clever counterfeiter who was smart enough to humbly offer the greatest experts the missing links in their collections. “He would add a mark or make up new ones,” says Mr. Kind, “claiming he found the coins by accident.” The Banque de France has recently learned that a good dozen of its coins are fake—or rather, real Farigaults. “Most of our numismatic collection was purchased in 1920 and 1926,” says Mr. Manas, “when the end of the free convertibility of gold prompted the bank to seek new investments.” It invested in art, real estate and coins. At the time, an embryonic medal collection already existed. It started in the early 1870s, when people wanting to contribute to the war reparations demanded by Prussia swapped their cold hard cash for government bonds. “Our cashiers set aside well-preserved medieval coins and old Louis, which formed the core of our collection,” says Mr. Manas. Other episodes enriched the holdings. In 1952 and 1958, the government issued the massively popular Pinay bonds, which allowed the Banque de France to collect 186 tons of gold, including a small number of coins that had been handed down from generation to generation. The prospect of a gold-indexed 3.5% yield exempt from estate taxes tempted the French into looking under their mattresses. The national bank also has some very rare, unusual pieces that have never been in circulation, such as the 100-franc gold Bazor—the last of its kind. In 1935 and 1936, 13 million of these coins were struck, only to be melted down several years later.

Failures and Oddities
The collection also includes examples of pulped banknotes: the 500-franc “Colbert” bill, removed from circulation when the Americans landed with their green bills denominated in francs; a portrait of Anne of Brittany created by Pierrette Lambert in 1986 that had to be scrapped because it failed to meet security standards; and a 200-franc banknote featuring the Lumière brothers that was canceled in 1995 when the newspaper La Montagne revealed that they had received the Francisque, a decoration awarded by the Vichy regime. Lastly, there are some unexpected little treasures: gold medals engraved with magic spells, designed by an American who gave them to Roosevelt and Churchill during the Second World War; a 100-franc banknote that Picasso designed at his eldest daughter’s request: it was made with life-sized likenesses of the effigies of France and Sully on the obverse and reverse so that she could play shopkeeper.