Established in 1963, the Beinecke is one of the world’s largest libraries devoted to rare books and manuscripts. As a major force on the international market for archival materials, its annual acquisitions continue to expand both existing and new subject areas. 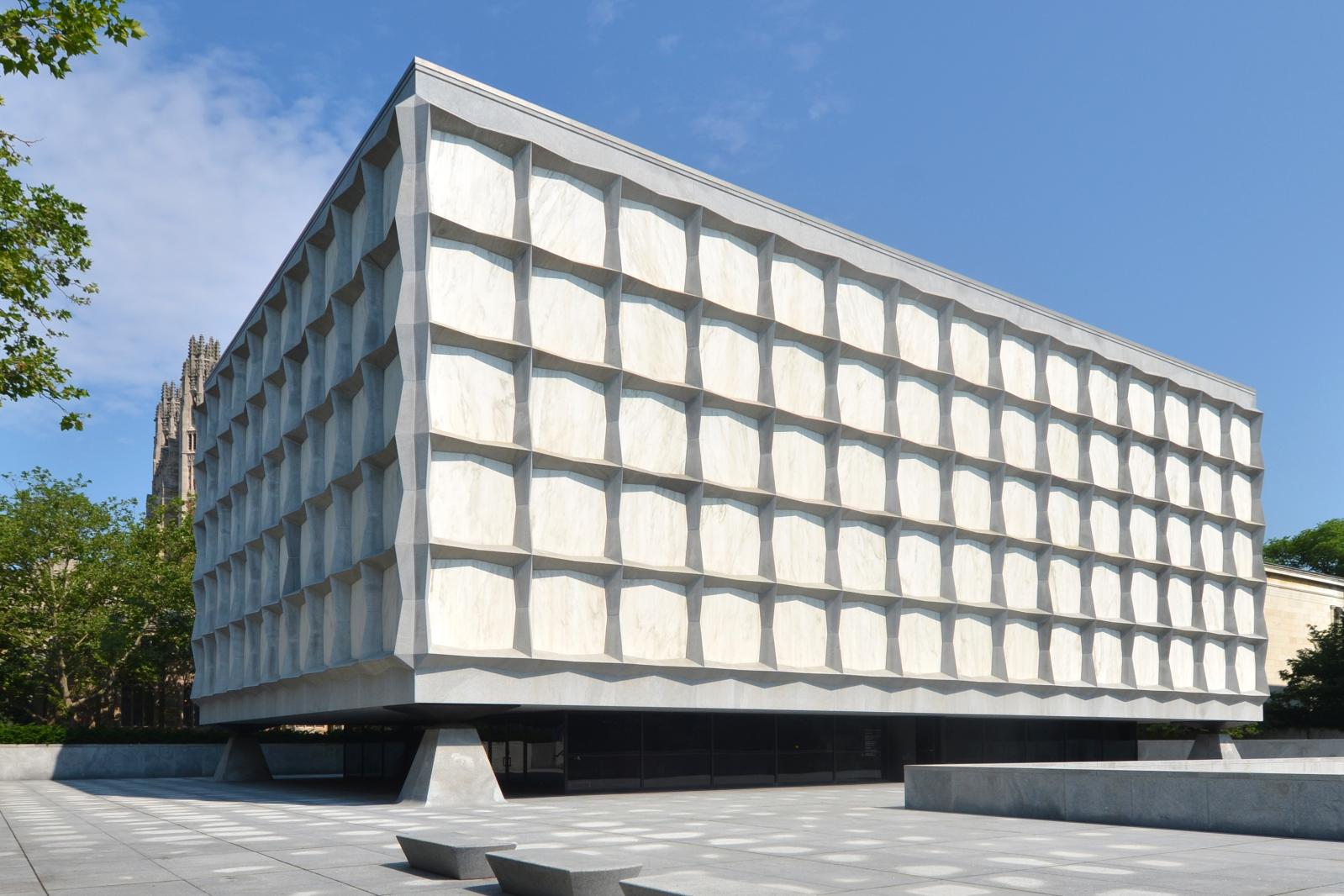 Considered the crown jewel of the Yale University Library system, the Beinecke is the University’s principal repository of literary archives, early manuscripts, and rare books. It was created in 1963 through the gift of three Yale alumni: Edwin J. Beinecke, Frederick W. Beinecke, and Walter Beinecke. Today, the Library serves both Yale and an international scholarly community, attracting nearly 10,000 researchers per year. In addition, it hosts special exhibitions, readings, and concerts. It is also the granting institution of the Bollingen Prize for Poetry, awarded biannually, as well as the Windham-Campbell Prizes for fiction, nonfiction, poetry, and drama, awarded annually. For the past two decades, the Beinecke has been working to make its holdings available to a wider audience through expanding its digital collections and building a vast archive of online exhibitions.

The Beginnings of the Yale Library
The origins of the Yale Library extend back to the Reverend John Davenport, one of the founders of the New Haven Colony in 1637 and a proponent of the creation of a college for clergymen. James Pierpont, one of the ten founders of the Collegiate School that would become Yale College, purchased Davenport’s collection and included it in the original collegiate library. In 1742, Thomas Clap, then the president of Yale, compiled the first catalog of the Yale Library, listing 2,600 volumes. About 70 percent of these still survive and are now shelved within the Beinecke and are known as the “1742 Library.”

Notable Collections
Today, the Beinecke Library holds more than one million books, thousands of linear feet of manuscript pages and papyri, personal archives of hundreds of important cultural figures, in addition to numerous photographs, maps, art objects, as well as a variety of audiovisual material and born-digital content. The main curatorial areas are Early Books and Manuscripts (pre-1500), Early Modern (1500 to 1800), and Modern (post-1800), the Osborn Collection of British literary and historical manuscripts, Yale Collection of American Literature, and Western Americana Collection.
Among subject areas, the Library’s collection of Islamic and Near Eastern manuscripts is particularly notable as one of the oldest and richest holdings in North America. Yale University was one of the first academic institutions to begin systematically collecting in this field. The collection started in 1870 with a large gift from Edward Elbridge Salisbury, who from 1841 served as Professor of Arabic and Sanskrit at Yale University, the first such position in the Americas. The Beinecke’s holdings in the subject area are one of the highlights of the newly launched Visual Resources of the Middle East (VRME) project, which aims to collect works of art, documentary photographs, and diverse objects from different Yale collections onto one platform and to make them available to a diverse audience beyond the University. The James Weldon Johnson Memorial Collection of African American Arts and Letters (JWJ) at the Beinecke is one of the most consulted collections in the Yale Library. The collection was established in 1941 by photographer Carl Van Vechten in honor of his friend, the writer and civil rights activist James Weldon Johnson. Among the highlights of the collection are the papers of writers Richard Wright, Chester B. Himes, and James Baldwin, poet Langston Hughes, and performer Josephine Baker, among many others. The JWJ collection also contains extensive visual material, including photographs, paintings, sculptures, prints and drawings.

The Beinecke Building
From the eighteenth century forward, Yale University’s holdings of rare books and manuscripts continued to grow through both gifts and purchases. In the 1960s, a gift from the Beinecke family allowed the University to construct a purpose-built home for the collection. The now iconic building was designed by Gordon Bunshaft of the architecture firm Skidmore, Owings & Merrill. Motivated by the need to control sunlight in order to preserve the library’s fragile holdings, Bunshaft conceived of an exterior of marble panes which, at a thickness of only 1¼” (roughly 3 cm), allow some light to enter the interior while filtering out damaging rays. These marble panels are set in a gridded frame of light gray Vermont granite and the whole structure is supported by a system of steel trusses hidden within the granite, which transfer the weight of the building to the four concrete pillars at each of its four corners. The grid of the exterior evokes the golden ratio: there are fifteen marble blocks running across the face of the building, five vertically, and ten in-depth. This ratio of 3:1:2 is a reference to the specific nature of the Beinecke’s collection, with the layouts of many early books built on the same principle.
The façade of thin marble panes creates a dramatic and dynamic interior. As the light filters through the marble, it changes its color from white to a variety of warm hues, simultaneously highlighting the stone’s intricate veining. The appearance of the individual panels constantly changes depending on the time of the day, weather, and the season, creating an environment that is both otherworldly and breathing with life. Located at the heart of this mise en scene is the Beinecke’s treasure trove—a six-story glass-enclosed tower of book stacks that holds approximately 180,000 volumes, including the “1742 Library.” Two additional treasures are on permanent display on the mezzanine level of the central structure: The Gutenberg Bible, the first Western book printed from movable type, and John James Audubon’s monumental Birds of America. The mezzanine and ground floor are also used for special exhibitions that draw on the Library’s vast holdings. The rest of the collection is housed on two underground levels located under a plaza that surrounds the Library. The plaza features a sunken courtyard that allows natural light to permeate the reading room, offices, and classrooms located on the subterranean level. The courtyard is also a setting for a group of sculptures designed by artist Isami Noguchi that in their material echo the white marble of the building above.
At the time of its unveiling, Bunshaft’s modernist design was widely criticized. Donald Wing, at the time an associate librarian at the Yale Library, called it “a terrific white elephant” and “an architect’s dream and our future nightmare.” Since then, Yale librarians have come to appreciate the building and its architecture is widely admired, with nearly 200,000 visitors per year visiting the library to see its façade and dramatic interior.

New Acquisitions
According to the Library’s annual reports, each year the Beinecke adds on average between 10,000 and 15,000 books, 1,200 feet of archival material, and more than 3,000 discrete manuscripts to its holdings. Among the most remarkable recent acquisitions is the Walter Evans Collection of Frederick Douglass and Douglass Family Papers. The collection is an extraordinary compilation of materials that relate to the renowned abolitionist and orator, including photographs, account books, ephemera, and letters. Most notably, however, the collection includes rare family scrapbooks that gather materials related to Douglass’s political and private life. The collection comes from Walter Evans, a retired surgeon and prolific collector who accumulated a vast number of important materials related to the lives of prominent African Americans. In 2013, Dr. Evans gave his collection of James Baldwin letters to the Beinecke and the purchase of the Douglass Family Papers will be followed by a gift of approximately 200 original drawings by satirical cartoonist Oliver Wendell “Ollie” Harrington. The Douglass and Harrington collections, along with Evans’s collection of James Baldwin letters and papers, will be featured in a future exhibition at the Library.

Hannah Bennet at Avery – a Library of the Future