The 19th century certainly witnessed a notable dichotomy in the sphere of tapestries. After a period devoid of genius, which confined the woven creations to academic cartoons, the second half of the century saw new interest by artists in an art disregarded for far too long. 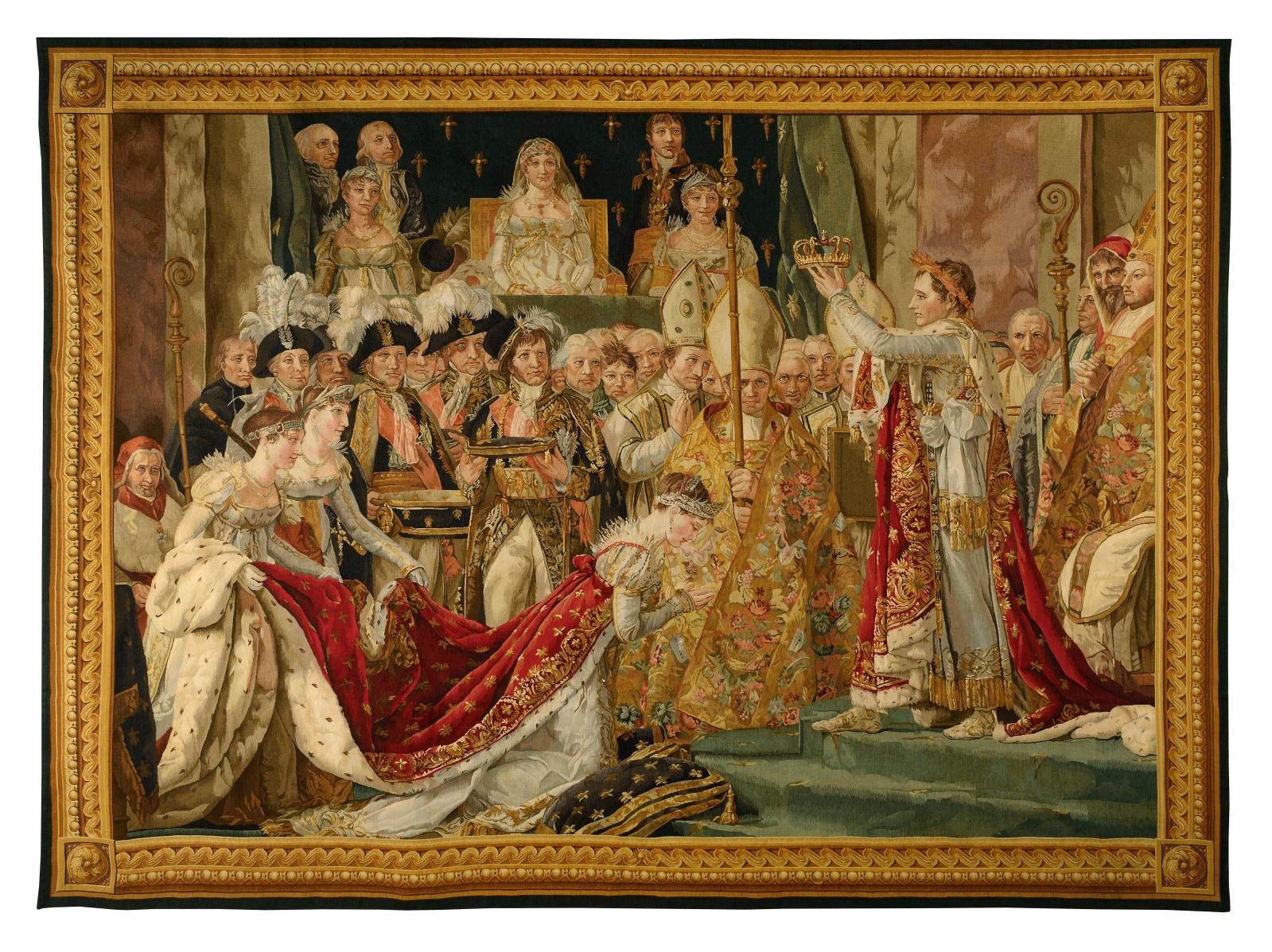 While French imperial reforms brought dramatic change in many fields, the former royal factories remained trapped in a disheartening conservatism. Starting with the Directoire (Directory, 1795–1799), the decorative arts certainly responded to the fancies of a new creativity, but woven art was not deemed important. This sad state of affairs dictated the position of tapestry at the dawn of the 19th century, and the situation did not look set to change. In 1805, Napoleon I commissioned the Gobelins and Beauvais factories with tapestries and woven portraits that were required to faithfully copy paintings by Jacques-Louis David, François Gerard and Antoine-Jean Gros. The French imperial palaces were eager for curtained doorways, armchair covers, screens and historiated hangings, but nothing that drew on the intrinsic qualities of loom-crafted works. Worse still, mechanization further undermined the expertise of craftsmen now deprived of work by Jacquard looms, of which there were nearly 11,000 in operation by 1812. While the figurative stiffness of mechanical textile works in no way compared with the supple art of hand-made tapestry, the latter seemed doomed to disappear. But the most common criticism levied at it since the second half of the 18th century finally contributed to its rebirth.

A Laborious Revival
At the turn of the 19th century, the instability of dyed yarns was a well-worn cliché. To counter this, Napoleon I encouraged research and experimentation, chiefly led by the chemist Michel Eugène Chevreul (1786-1889), who became head of the dyeing workshop serving Gobelins and Beauvais. The problem of non-permanent dyes led the scientist to explore the idea of simultaneously contrasting colors. In 1838, Chevreul found a solution to the problem in a stable chromatic range encompassing 14,400 different shades, while a new rival: wallpaper led to a renewed look at tapestries. This inevitably led to a huge drop in orders for woven portraits, copies of historical hangings and decorative tapestries of all styles. Though the Second Empire and universal exhibitions certainly encouraged both the public and private aspects of the sector, this decline in production roundly condemned academic painting, strongly accused of compromising tapestry. Chevreul himself challenged the use of too broad a palette for this art, finally recognized as more resplendent in the Middle Ages than under the yoke of neo-classicism. The lesson was duly absorbed. During the French Restoration (1814-1830), weaving and design schools were established at the Gobelins. Aubusson opened its school of industrial design in 1869, while the Third Republic called upon the top three factories to decorate public spaces with monumental pieces woven from designs by modern and Symbolist artists. Then the engineer and art critic Alfred Darcel (1819-1893) was appointed as head of the Gobelins to carry out the long-awaited changes, working there from 1871 to 1885. As a critic who favored modern artists, he commissioned cartoons from them, while as an engineer he fostered the use of thick wool and a limited range of colors used for hatching to achieve the decorative simplicity and mural character of medieval tapestries. His successors, Jules Guiffrey and Gustave Geffroy, continued this momentum, their main priorities being to simplify models, define contours and halt the copying of paintings.

Arts and Crafts and the Nabis
First in England then in France, rapid industrialization sparked a form of angst. William Morris with the Arts and Crafts movement and later the Nabis aspired to revive the authenticity of craftwork and develop a new aesthetic with no distinction between the fine and applied arts. In 1877, Morris began to develop tapestry production, "the noblest of all woven crafts", establishing the Merton Abbey Works facility in 1881. Cartoons by Morris, John Henry Dearle and Edward Burne-Jones explored a fantasized medieval world in hangings whose iconic "Holy Grail" adorned the dining room at Stanmore Hall. These tapestries were so popular that their model, with a few variations, was reproduced for various wealthy individuals. But with their long and expensive production process, large tapestries unfortunately never achieved the profitability of small decorative pieces for furniture and cushions. Respect for a medieval tradition, where woven art expressed itself fully in the flat monumentality of architecture, as with stained glass and frescos, was obviously key to this success, and was acknowledged by the Nabis as well. Weary of the easel, and eager to imbue everything with beauty, the Nabis became smitten with tapestry for its ability to surpass painting through its utilitarian role as an insulator, its warm materiality and the delicate mastery of its technique. By liberating space and color, the Nabis anticipated the modernity of the 20th century. Like factories, they provided cartoons that were mostly transcribed onto the loom by their wives, including Clotilde Maillol, France Ranson and Lazarine Boudrion, who was married to Rippl-Rónai. Meanwhile, in the second half of the 19th century, Aubusson surrounded itself with private workshops, adopting modern and Art Nouveau aesthetics based on Henry de Waroquier's cartoons. Artistic emulation around the art of weaving soon swept away former styles and focused on modernity. As though thumbing its nose at Gobelins and Beauvais, Aubusson became the center of this new emancipation after the war.

The Nabi Tapestry Femmes en blanc (Women in White) by Paul Ranson at the Musée d'Orsay,
the eight tapestries in the Rotonde du Glacier at the Opéra Garnier based on cartoons by Mazerolle,
and the "Parrot" tapestry after Henry de Waroquier at Aubusson.

The 19th century certainly witnessed a notable dichotomy in the sphere...