The exhibition “Americans in Spain: Painting and Travel, 1820-1920” examines the widespread and, until now, under-appreciated influence of Spanish art and culture on American painting. 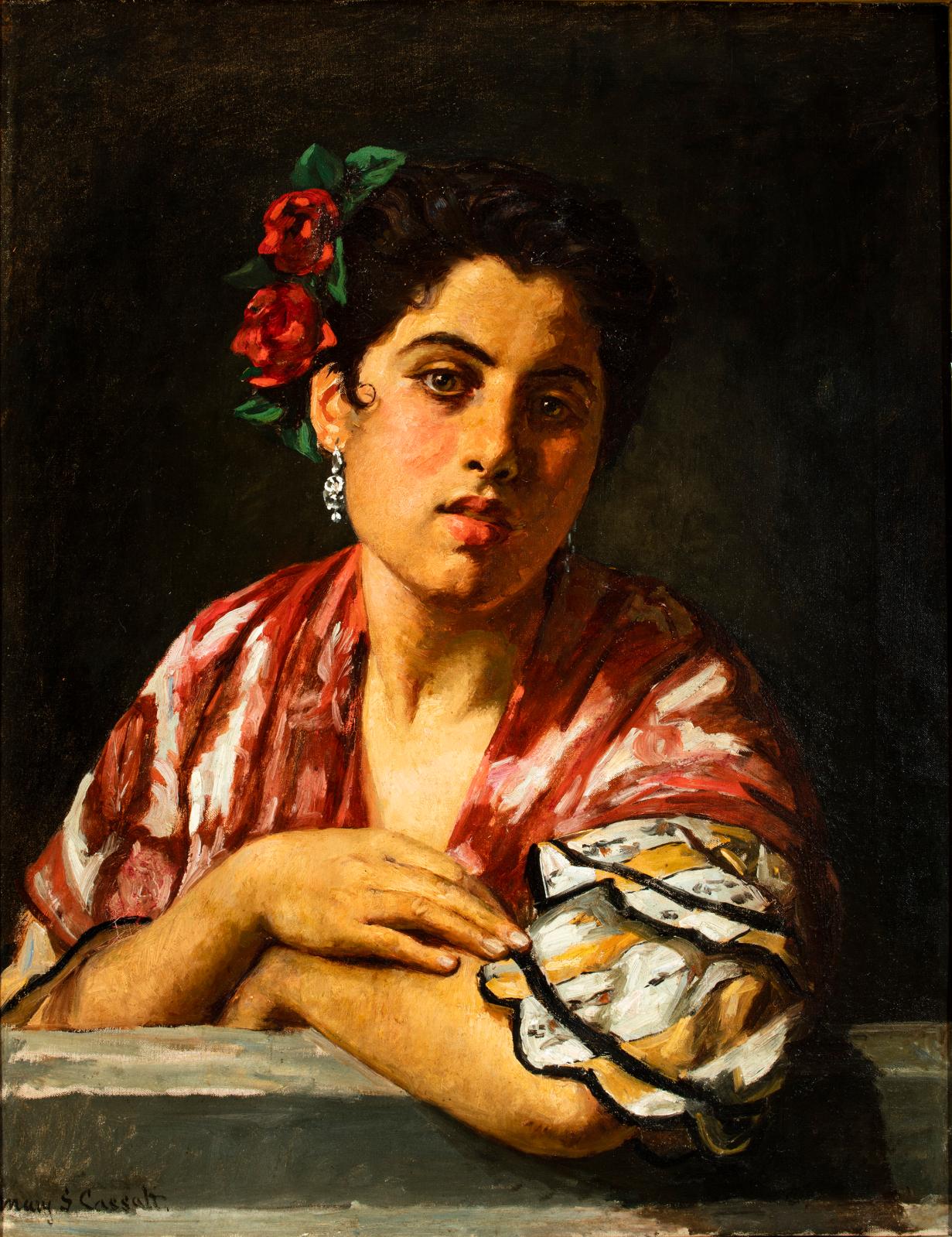 Co-organized by the Chrysler Museum of Art and Milwaukee Art Museum, “Americans in Spain” brings together more than seventy paintings alongside nineteenth-century photographs, prints, and travel guides to tell the story of Spanish influence on the development of American art. The exhibition is arranged thematically with the color-coded walls of the main gallery guiding the visitors from one topic and to another. It occupies three rooms: the narrow entrance space that introduces the exhibition’s concept, the large main gallery partitioned into smaller thematic areas, and the relatively small last room for drawings and photographs that provides an intimate space for viewing the works up-close. The exhibition draws on the two institutions’ rich collections of American and old master paintings, while also showcasing extraordinary loans from U.S. and international museums.

Among the highlights are two remarkable portraits of the Spanish dancer Carmen Dauset Moreno, known as Carmencita, made during her visit to New York in 1890: one by John Singer Sargent, on loan from the Musée d’Orsay, and another by William Merritt Chase, on loan from the Metropolitan Museum of Art. The exhibition also includes a newly rediscovered painting by Mary Cassatt, Spanish Girl Leaning on a Window Still (c. 1872), from a Madrid private collection, which is being shown in the U.S. for the first time.

Spanish Influence
Carefully researched and thoughtfully curated, the exhibition makes a compelling case for the influence of Spain and its culture on American artists in the nineteenth and early twentieth centuries. Corey Piper, Brock Curator of American Art at the Chrysler and one of the exhibition’s curators, stresses the importance of exploring the Spanish-American connection within the history of American art: “American travelers mined the styles and subjects they found in Spanish old master paintings on the walls of the Prado and other museums, propelling American painting in new, cosmopolitan directions. Artists also participated in Spain’s burgeoning tourism industry, in which art and images spurred intense interest in Spain among American audiences and helped shape perceptions of Spain well before travelers ever arrived in the country.”

Imaginary Pasts
Before the Civil War (1861-65), most American artists discovered Spain secondhand through the work of such British artists as David Wilkie and David Roberts, who were among the first foreign artists to make the country their subject. Their idyllic and often exoticizing images of Spanish people and landscapes were further elaborated by literary accounts, including Washington Irving’s widely popular Tales of the Alhambra (1832). These depictions fed the artists’ fascination with Spain’s Islamic heritage in particular, establishing such sites as the Alhambra palace, Granada’s historic Albaicín district, and the Mosque–Cathedral of Córdoba as major travel destinations. In the exhibition, these locations feature prominently in works by John Ferguson Weir, Elizabeth Boott, Mary Bradish Titcomb, and Edwin Lord Weeks. While some of these works focus primarily on the monuments’ architecture and topographical settings, others use them as backdrops for constructed renditions of an imagined Muslim past. In these examples, the careful rendering of architectural details lends an air of credibility to otherwise fanciful depictions of religious rituals and everyday life. Theirs is the Spain of imagination and fantasy, produced by and feeding into the exoticizing image of the country that attracted American travellers at the dawn of the era of mass tourism.

Portraits and Types
A similar flight of fancy is often present in the depictions of Spanish people. Many works on view evoke the types that would be recognizable to contemporary American audiences from travel literature and popular culture: flamenco dancers, Romani musicians, and matadors. While some of these depictions reduce their subject to an exotic other, a few manage a productive tension between fantasy and realism. In this respect, Cassatt’s Offering the Panal to the Bullfighter from 1873 is a delightful painting imbued with a convincing subjectivity. Despite the painting’s conventional subject matter and the costume-like nature of the figures’ traditional clothing, the painting exudes a powerful sense of immediacy through dynamic postures and gazes. The effect is further emphasized by Cassatt’s bold and textured brushstrokes, which she adopted after studying Diego Velazquez’s paintings at the Prado during the same trip.

Studying at the Prado
Americans in Spain highlights the importance of the Prado as a source of learning and inspiration for numerous American artists visiting Spain at the turn of the century. In addition to Cassatt, William Merritt Chase, John Singer Sargent, and Robert Henri are cited among the artists who registered to copy masterpieces in the museum’s galleries, and the resulting influence is evident in the featured work by these painters. The exhibition includes an extraordinary copy of Velazquez’s full-length portrait of Queen Mariana of Austria made by Henri during his trip to Spain in 1900. The royal subject and her elaborate setting would appear to be worlds apart from the scenes of New York life that dominated the work of the Ashcan School founder, yet it is fascinating to see the influence of Velazquez’s lively brushwork and treatment of color on Henri’s progressively looser handling of paint in the 1900s and the 1910s.

A Virtual Visit
For those unable to visit Norfolk to see the exhibition in person, Chrysler offers a number of digital possibilities, in addition to the richly illustrated catalog. The exhibition’s website includes a virtual tour, available on both the computer screen and as a VR experience. In addition, an interactive mapping companion website brings together historical maps with paintings and photographs from the exhibition, inviting the visitors to experience some of the places depicted by the artists. All in all, Americans in Spain offers a welcome escape from our present moment of travel restrictions, allowing the visitor to remember the pleasures of museum visits, even while they remain beyond reach for many.

A Fine Bid for the Murillo's Good Shepherd
Newsfeed
See all news
We Are on Break for Our Annual Summer Hiatus - Back in August! Happy Summer
A Michelin Star for the Museum of Modern Art in Fontevraud
World Record for the French-Danish Painter Gerda Wegener
Canadian Indigenous Groups Ask Vatican to Return Cultural Artifacts
Not to be missed
Exhibitions