An overview of the Musée de Pont-Aven's strategy with its new director (since June 2020): the strengths and weaknesses of the collection, recent acquisitions and coming exhibitions. 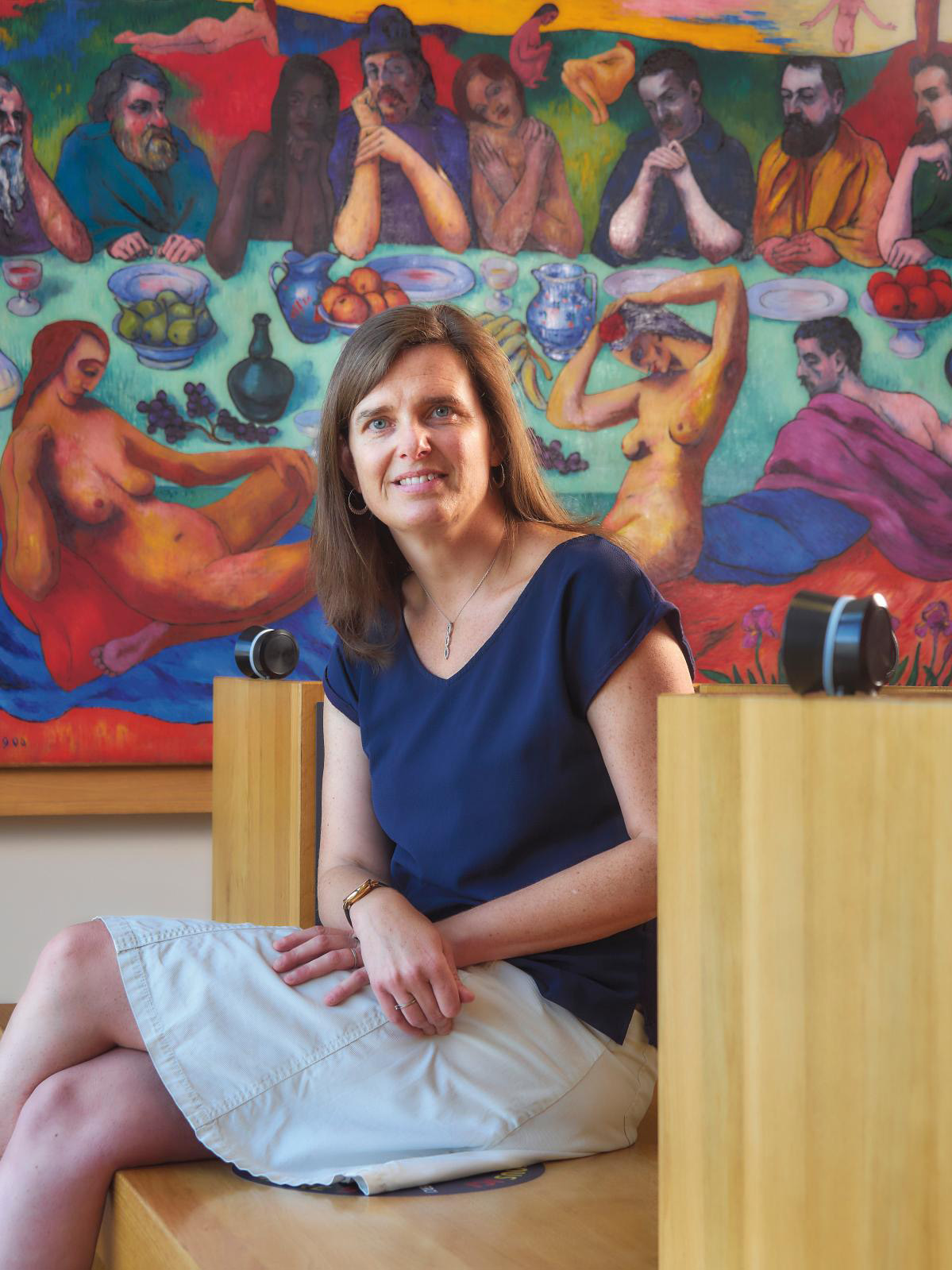 Sophie Kervran in front of Hommage à Gauguin (Homage to Gauguin; 1906) by Pierre Girieud (on loan from the CNAP).
© DR

Sophie Kervran in front of Hommage à Gauguin (Homage to Gauguin; 1906) by Pierre Girieud (on loan from the CNAP).
© DR

What will your priorities be for the Musée de Pont-Aven?
Estelle Guille des Buttes-Fresneau was the curator and director here for fourteen years. It took on another dimension with her: she created a firm place in France's museum landscape for what was initially a "small museum" founded without a collection in the 1980s. A partnership was established with the Musée d'Orsay, and the museum gained from generous acquisition budgets. I want to give further visibility to our collection, which remains relatively unknown. We don't loan our works out very often, as we have relatively few in our reserves. We are gradually putting the collection online, and we're developing virtual exhibitions. The museum also houses a resource center open to all researchers. This contains about 4,300 works, a thousand dossiers on artists, thousands of antique photographs and postcards and over 500 manuscripts, including the correspondence between Maurice Denis and Albert Clouard, and letters from Paul Gauguin, Charles Filiger and others. Cataloging and digitization are underway. It is a reference center for the Pont-Aven school and more generally the history of 19th-century art in Brittany.

How do you see the collections and what gaps do you think should be filled in the next few years?
Our biggest asset is being able to show works in the place where they were actually created. The collection illustrates the cosmopolitan character of this artists' village, which attracted American, Dutch, Danish and British artists alike. It also shows the way art evolved from the 1860s, when painting was still very academic, to the avant-garde, in the wake of Gauguin, with Nabi painters like Maurice Denis: we have a fine group of his works. Another of our strengths is our graphic arts collection, which is very large. As far as gaps are concerned, I would say we need some major paintings by artists like Paul Sérusier and Émile Bernard—works typical of their most productive years in Pont-Aven. The museum has continued to grow over time, at a steady pace in recent years, and I intend to continue along this path. New works have just been acquired: an oil on canvas by Pierre-Eugène Clarin, two zincographs by Gauguin from the "Volpini Suite" (it now just needs two to be complete), and a woodcut by Armand Seguin from 1894, which Paul Gauguin dedicated in Tahitian to Maxime Maufra.

Some years ago, the museum entered into a partnership with the Musée d'Orsay. Will you develop this type of collaboration?
The five-year partnership signed with the Musée d'Orsay looks set to be renewed. We are in a period when things are done in collaboration, and I firmly believe in exchanging and pooling resources. In addition, a lot of collectors gravitate around the Pont-Aven school, and one of them will soon be lending us three paintings by Paul Sérusier. Here, exhibitions often give pride of place to privately-owned works. This will be the case with "Mathurin Méheut et la Bretagne" ("Mathurin Méheut and Brittany"), a show scheduled for the summer of 2022, which will reveal some rare works, including some never exhibited before.

Has the health crisis forced you to revise your plans for the coming months?
The exhibition on Mathurin Méheut was supposed to take place this spring. As this proved impossible, we had considered replacing it with "L’école de Pont-Aven. Variations sur la ligne" ("The School of Pont-Aven: Variations on the Line"), a hang based on the graphic arts collection plus works loaned by the Musée d'Orsay and the Quimper and Brest fine arts museums. The project has now turned into a year-long exhibition, starting in January, in the heart of the permanent collections, with a new presentation every three months. We finally decided to extend the exhibition "Réserve, ouvre-toi !" ("Open, Reserve!") until May 2021. In a way, it benefited from the two lockdowns, as it was originally only supposed to last three weeks. There's no change to next summer's exhibition. This involves collaboration with Roanne's Musée des Beaux-arts et d’Archéologie, and we'll be studying the relationship between Jean Puy, a little-known Fauvist painter, and his dealer, Ambroise Vollard. In the winter of 2022, we'll be focusing on photography: a first for the museum.

You are presenting “Reserves, open up!”, a participatory exhibition that highlights works from the collection that are usually kept in the shadows. What have you taken away from this experience?
It is not a new idea – it has been done in Rouen with "La chambre des merveilles" ("The Room of Wonders"). But it is an interesting adventure. The project allows you to reflect on what is shown or not shown, on what is a masterpiece, on the role of the curator, and on the way visitors look at collections. It reveals their tastes and their tendencies. Two thousand people voted on their favorite paintings, engravings or drawings, from a list of fifty works drawn up by our team. Their prize list – L’attente (Waiting) by Alfred Delobbe won the majority of the votes – sketches another picture of the museum, and reveals some hidden treasures by Victor Prouvé, André Dauchez, Ferdinand du Puigaudeau, Mary Piriou, Louis Roy, and so on. The accompanying descriptions were written by members of the Friends of the Museum, by the sociocultural center La Balise, in Concarneau, but also by students from the Saint-Yvi school, who came up with innovative texts in the form of fiction and poetry inspired by the works.

You are also the curator of the Musée de la Pêche in Concarneau, where a renovation project has been planned for years. How do things stand at present?
The team of the CCA (Concarneau Cornouaille Urban Community), which manages the two museums, changed during the last elections, but the project has not been abandoned. There are various matters to address, like renovating the building, which has aged, and modernizing the permanent circuit. The museum is celebrating its 60th anniversary in 2021. Visitors like the atmosphere there, and we must make sure it loses none of its charm. But the museum needs to be more in tune with today's needs and expectations in terms of presentation, mediation and educational tools. The message also needs rethinking, especially as issues like overfishing, sustainable development, and the role of women are highly topical.

Mary Morton: A Painting Inheritance
Newsfeed
See all news
Soissons' Cathedral of Saint-Gervais-et-Saint-Protais Gets Its Rose Window Back by the End of the Year
Ancient Egyptian Road, Buried for Centuries, Uncovered in Lavish Ceremony
The Mystery Behind This Chinese Painting, About to Go Under the Hammer
Finalists of MAXXI Bulgari Prize Announced
Not to be missed
Interviews
Amin Jaffer: Curator of the Al Thani Collecti…
The delights of the fabulous collection of Sheikh Hamad Bin Abdullah…
Interviews
Françoise Gilot, Life Story of an Artist and a…
On the eve of her 100th birthday, Paloma and Claude Picasso’s mother…
Interviews
Caroline Jollès, Patron of Design
In 2011, Caroline Jollès, who is very involved with the Quai Branly…
Interviews
Sebastião Salgado: "Photography Has Been a Way…
In a career spanning nearly five decades, Sebastião Salgado has…