Founded in 1740, the Sèvres Manufacture is the custodian of a priceless intangible heritage—centuries of French know-how in the ceramic arts, passed from generation to generation of artisans. 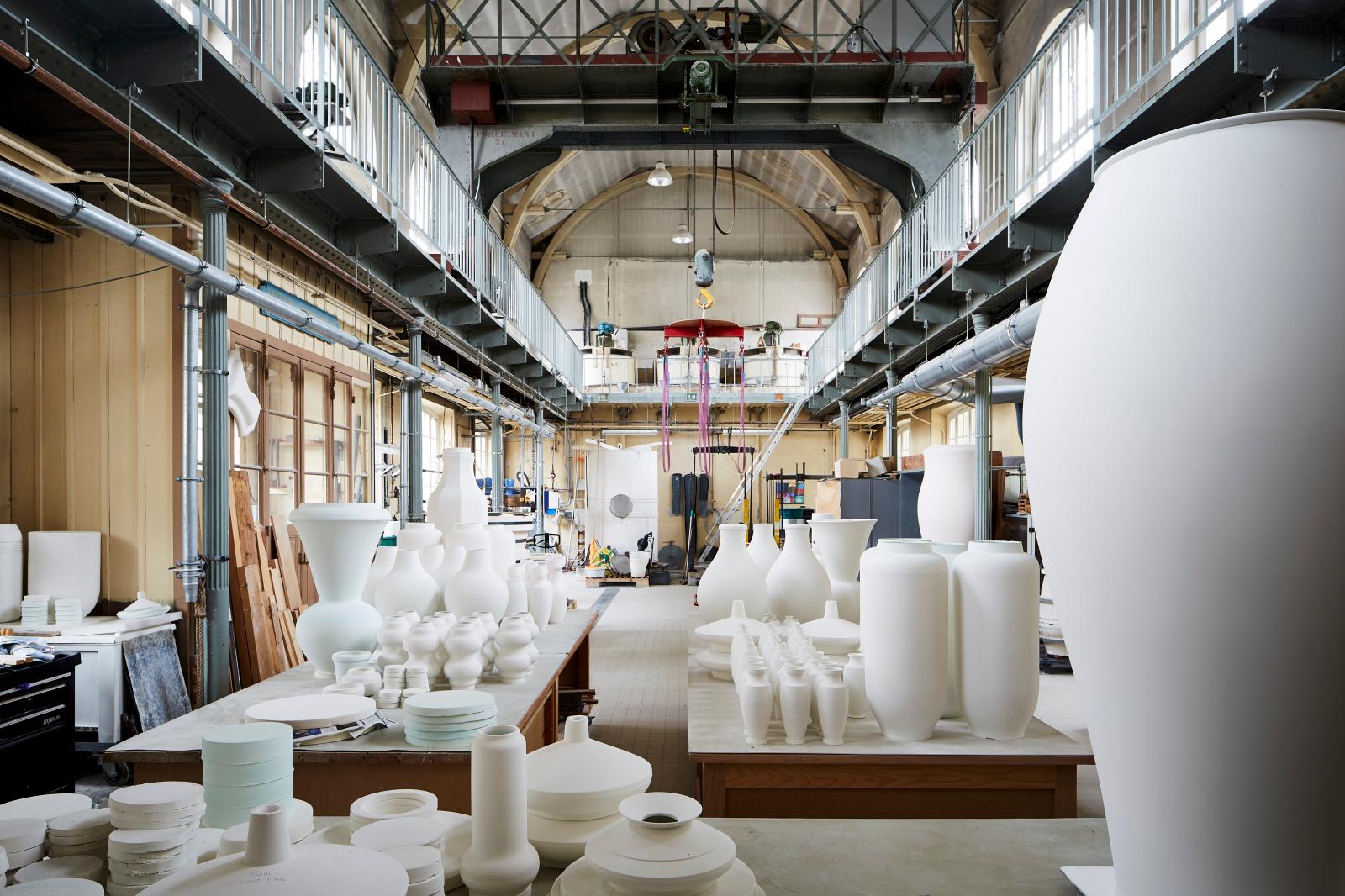 Originally established as a private enterprise at the Château de Vincennes, the Manufacture was moved to Sèvres on the outskirts of Paris in 1756 and became a royal factory by 1759. Before the COVID-19 pandemic, the Manufacture never once interrupted its operations. Deemed one of the “glories of France,” it continued to run even through the French Revolution. The vast campus of the Manufacture and the National Ceramics Museum, built in 1861 and inaugurated in 1876, comprises twenty-four buildings located on a splendidly landscaped nearly ten-acre estate on the bank of the Seine. In 2010, the Manufacture and the Museum became a public establishment (Sèvres Cité de la Céramique), joined in 2012 by the Adrien Dubouché National Museum of Limoges becoming the Cité de la Céramique Sèvres & Limoges. In 2012, the Manufacture was named a Living Heritage Establishment, confirming its stature as an important national institution and as an influential international center for the ceramic arts.

From a Private Enterprise to the Royal Manufacture
The Manufacture was born as a private enterprise when financial superintendent and director of the French East India Company Jean-Henri-Louis Orry de Fulvy established a porcelain workshop at the Château de Vincennes. By the 18th century, France was on a quest to produce its own porcelain in order to capture a portion of the massive market for Chinese ceramic wares. The French government and entrepreneurs were also concerned about the growing importance of ceramics from the Meissen factory that had started to produce porcelain in 1709 under the patronage of Augustus the Strong (1694-1733). In 1740, de Fulvy hired ceramist Louis-Francois Gravant, who developed a unique formula that became known as soft-paste porcelain. Unlike the true hard-paste porcelain produced in China and at Meissen, soft-paste formula worked without kaolin, a white clay mineral that was first found in France only in 1768 in the area of Limoges.

De Fulvy’s Manufacture and its wares quickly attracted the attention of Jeanne-Antoinette Poisson, better known as the Marquise de Pompadour. She was instrumental in persuading Louis XV to invest in the factory in 1753 and to authorize it to use the royal monogram: two intertwined Ls. She also chose the new site for the Manufacture at Sèvres in 1756, conveniently positioned on the road between Paris and Versailles. By 1759, Louis XV bought all shares in the company and converted it into a royal enterprise. The Marquise de Pompadour remained an important patron of the Manufacture for the rest of her life. By the time of her death in 1764, she owned over 3,000 porcelain objects, with around 2,500 contemporary pieces from Sèvres.

280 Years of Innovation
The Manufacture is a unique, living laboratory that is home to over 120 highly-skilled artisans practicing nearly thirty specialized trades. Among its priceless patrimony are six wood-burning kilns, the largest of which is a listed historic monument dating to the 19th century. It is refired only once every ten years in order to help transmit the Manufacture’s specialized skills to younger generations of artisans, as well as to allow the firing of exceptionally large-scale works, often produced in collaboration with guest artists.
The Manufacture is also famed for its exceptional materials (pastes, colors, enamels, etc.) produced in situ according to ancestral techniques. Over its history, the Manufacture has developed a palette of over a thousand different colors, with one of the most famous being the so-called “Sèvres blue,” a glaze developed around 1752 by chemist Jean Hellot (at the time, it was named “bleu antique,” then “bleu lapis”). Early on, the Manufacture’s artisans developed glazes that could absorb an unlimited number of colors and enamel colors that ranged from opaque to semi-opaque or translucent. These technical and scientific discoveries went hand in hand with artistic innovation. The Manufacture’s painters strove for greater naturalism in depicted scenes and ornamentation by introducing shading and gradient, an effect that was achieved through layering of enamels.

The Manufacture Today
Sèvres has long favored collaboration with artists. Since the 18th century, the Manufacture has been celebrated for its unglazed, unpainted porcelain known as bisque. The material’s luminous, sensuous surface made it a preferred medium for many sculptors. From the moment of its invention in 1751 to the present day, the unique qualities of bisque porcelain have attracted a variety of artists with divergent conceptual and stylistic concerns like Louis-Simon Boizot (1743-1809), Agathon Léonard (1841-1923), and August Rodin. In addition, numerous bisque objects were developed from engravings by well-known artists such as François Boucher. But it is also the chromatic possibilities offered by Sèvres’ exceptional palette and the magical transformation of firing that have attracted artists to collaborate with the Manufacture’s artisans. These include contemporary artists and designers such as Arman, Jean Arp, Louise Bourgeois, Matali Crasset, Johan Creten, Michele de Lucchi, Kristin Mckirdy, Nendo, Giuseppe Penone, Arthur Luiz Pizza, Andrea Branzi, Ettore Sottsass, Pierre Soulages, Chu Teh-Chun, Barthélémy Toguo, Lee Ufan, Betty Woodman, and Zao Wou-ki. Each have produced remarkable and precious objects inspired by porcelain’s unique qualities and the Manufacture’s heritage of craftsmanship. Examples of these collaborations are featured in the Sèvres Museum and Palaces of the French Republic as well as acquired by collectors and international cultural institutions.
The Manufacture’s heritage objects remain highly sought after by collectors and museums alike. In the past two years, objects produced in the 18th and 19th centuries have consistently performed well at auctions. Particularly popular objects are works conceived and realized by François Philippe Abel Schilt, Marie Victoire Jaquotot (1722-1855), Christophe Ferdinand Caron (1774-1831), and Claude-Aimé Chenavard (1798-1831), just to name a few.
Every year, the Manufacture opens its doors to the public during the European Heritage Days. On other days, its splendid history can be experienced in the galleries of the Sèvres Museum, which features many of its most thrilling historic and contemporary productions.

The Duchesse de Berry’s Porcelain Orchard by Sèvres
Newsfeed
See all news
Bonhams Opens Salesroom in Paris
Dutch Monument to Those Murdered by the Nazi Regime Opens – But Also Meets Opposition
Giant Violin Floats Down Venice’s Grand Canal
Picasso Exhibition to Finally Open in Toronto in Early October
Not to be missed
Cultural Heritage
An Architectural Gem: The Birth of Saint-Quentin's Palais…
A history impregnated with the industrial spirit of the 19th century,…
Cultural Heritage
From Caesar to LUMA: Arles, a City of Art and Culture…
Situated on the banks of the Rhone the provençal city of Arles has…
Cultural Heritage
Under the Floral Spell: Art, Architecture and Roses at…
Every year the gardens of Bagatelle, in Paris, attract rose gardeners…
Cultural Heritage
Villa E 1027: Eileen Gray's Masterpiece Rises from the…
The architectural masterpiece designed by Eileen Gray in Roquebrune-Cap-Martin…