Central to the oeuvre of the celebrated Genoan sculptor, a marvelous terracotta relief has seen the light of day, after two centuries in obscurity. 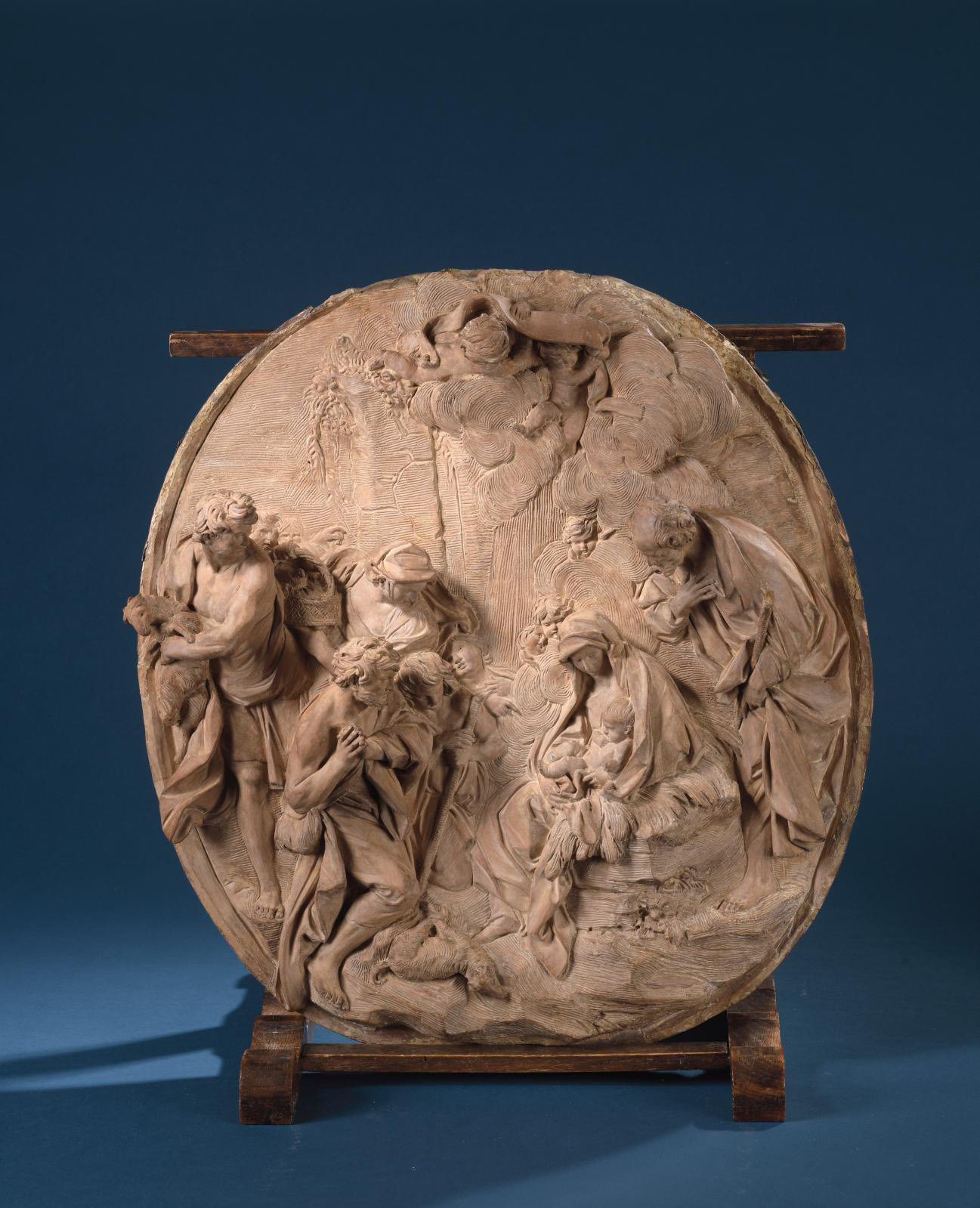 In The Adoration of the Shepherds, perfectly inscribed in an oval medallion, their heads are drawn like magnets to the Child, at the center of the composition. The spectator’s gaze travels between the groups forming two triangles, with young shepherds on the left facing the Holy Family and with two putti overhead unrolling a scroll. This skillful yet delicate construction expresses the baroque genius of its creator, Angelo de Rossi (1671-1715), and demonstrates the style of a sculptor admired in Rome around 1700. However, the artist came from further north, in Genoa, where he was trained by the master Filippo Parodi (1630-1702), who taught Rossi his unique style that mixed influences from Bernini—for whom he was an assistant—and Alessandro Algardi, called “L’Algarde”. Rossi may have also been inspired in Genoa by the works of Pierre Puget, who worked there from 1661 to 1668. With this strong foundation, he left for Rome in 1689, the capital of the Counter-Reformation where talented young artists were flocking from throughout Italy and elsewhere. He quickly made a name for himself because, three years later, his relief depicting Nebuchadnezzar and three young men in the fiery furnace won first prize in the top sculpture class of the Accademia di San Luca. After that, projects of increasing importance followed, such as the redesign of the altar of Saint Ignatius in the Church of the Gesù in 1695, the Monument to Alexander VIII in St. Peter’s Basilica in the Vatican in 1698, and even the monumental statue of Saint James the Less for the basilica of San Giovanni in Laterano in 1708. An admired and sought-after sculptor, Angelo de Rossi then came to join the Accademia di San Luca in Rome, and for his election to this honorable institution in 1711, tradition dictated that he present and offer to its members an original work: our virtuosic The Adoration of the Shepherds. Among the reasons for his success reported by the academy’s records was his masterful use of high relief, clearly passed down from L’Algarde, one of the spiritual fathers of this artist. The piece is also one of the last identified works by an artist who would die in the prime of his life, four years later and at the height of his career. It remained on display at the academy and then disappeared in the early 19th century. Since then, our only knowledge of it was a cast, found in Palazzo Venezia in Rome, and by preparatory drawings today housed in three European museums. Its unexpected rediscovery in an estate in Corbeil-Essonnes was a major victory for art history!