Report: What Has Emerged From the Latest Symposium on Provenance Research?

Nearly 200 people met together on Monday, November 7, in the auditorium of the Institut National d'Histoire de l'Art, for a study morning on "Provenance Research: A New Requirement for the Art Market". 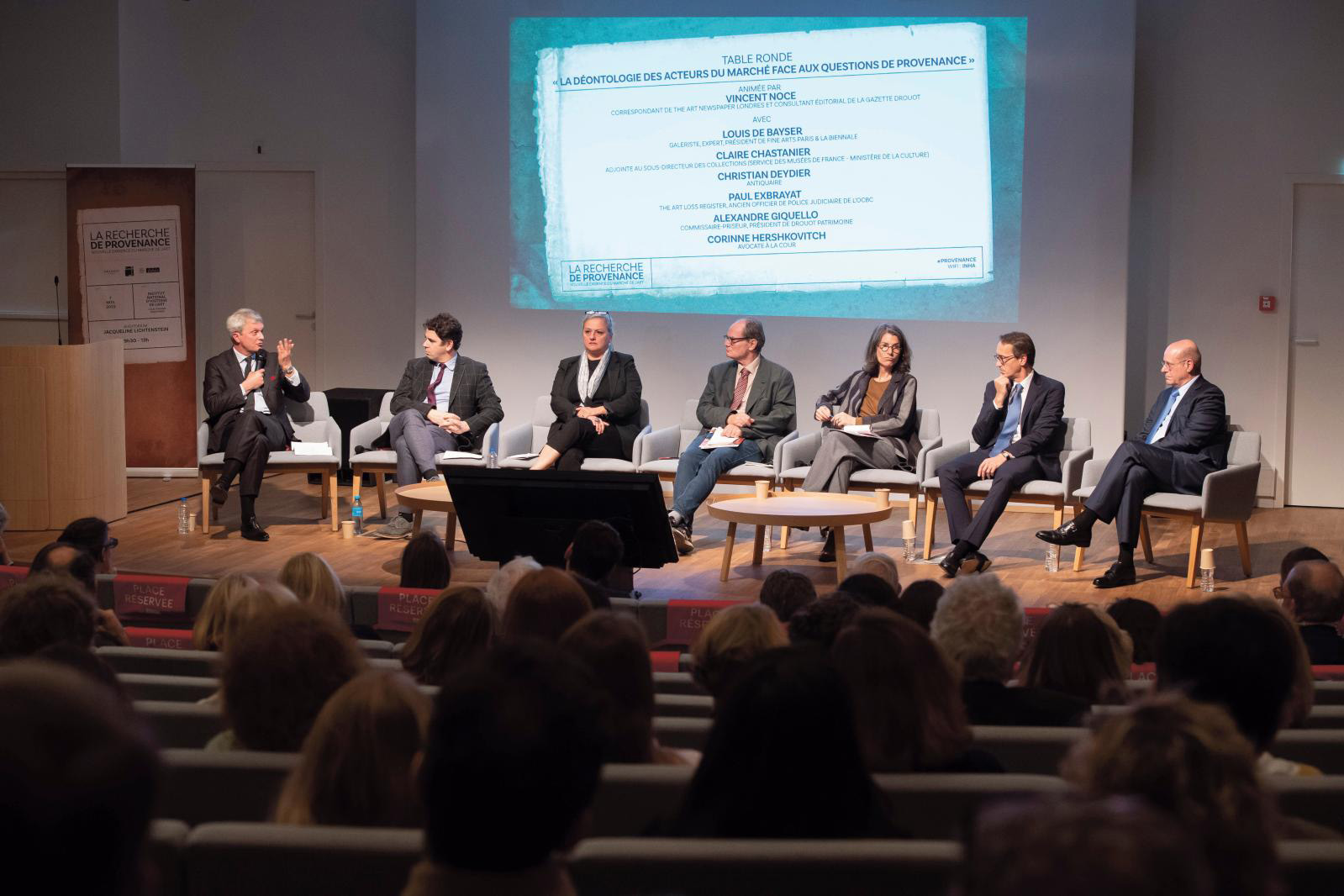 "Provenance research can no longer be ignored!" was the leitmotiv of this morning's session co-organized by INHA (National Institute of Art History), Drouot and the Conseil des Ventes (Auction Market Authority). Stakeholders from the art market, academia and the spheres of law, research and expertise provided an overview of this highly topical issue, ranging from the current situation to the challenges involved.

A New Requirement
For Alexandre Giquello, president of Drouot Patrimoine, provenance research now needs to be part of "new moral and political requirements" for the art market. Auctioneer Victoire Gineste pointed out that for many years, Christie's has had a research and restitution department consisting of "full-time researchers" based in London, New York, Berlin and Vienna.
On the government side, the French Ministry of Culture, in conjunction with the CIVS (Commission for the Compensation of Plunder Victims), has also been involved for several years now in a "new approach: proactive research," as emphasized by David Zivie, head of the Mission for the Research and Restitution of Looted Cultural Property. Over 75 years after the events, the State no longer waits for a family to report an "MNR" (National Museums Recovery) work; its researchers take the lead in trying to identify possible looted owners and their current beneficiaries. Meanwhile, with future restitution of works by national collections whose plunder has been proven, "a framework law" supported by the Ministry of Culture is being drafted, says Claire Chastanier of the Musées de France Department, "to avoid repetitive recourse to individual laws.” Other framework laws are envisaged for restitutions to former colonies in particular: a subject addressed in a pending report by Jean-Luc Martinez. Lastly, the idea of "organizing this [provenance] research in the academic world" has also recently been established in France, as indicated by Natacha Pernac, coordinator of a brand-new university diploma for "Research on the provenance of works" in Nanterre.

Lengthy and Complex Research
Currently, in the market, "the climate in favor of more transparency and trust is extraordinary," says Paul Exbrayat, representative of the Art Loss Register, a private British research agency, which lists about 700,000 lost objects in its database and responds to 450,000 consultation requests each year. Several speakers deplored the absence of a public database accessible to professionals, but given the lack of any representatives of the OCBC (Central Office for the Fight against Cultural Property Trafficking), whose absence was noted, this discussion was short-lived. Paul Exbrayat underlined how lengthy, complex and costly provenance research is. The antiquarian Judith Schoffel de Fabry, president of the Compagnie Nationale des Experts, did not hide the fact that for African objects, it is "very hard to arrive at a clear provenance", as most dealers active in the 20th century—following the example of Jacques Kerchache—"did not want their sources to dry up"! For antiquities originating from archaeological plundering, documentation is also "rarely complete, and sometimes destroyed," said Stéphanie Salha, head of the archaeology and heritage unit at the Ministry for Europe and Foreign Affairs. This quest then becomes "an ideal we strive for without always succeeding completely", because "the origin and destination of antiquities are largely forgotten," said Morgan Belzic. A member of the French Archaeological Mission in Libya, he cast a chill when he spoke, citing the massive looting of Libyan statues from the Cyrene region: objects that regularly turn up at the big auction houses. He listed about 200 of these over the last 20 years, saying that this was only "the tip of the iceberg": "64% of notices in sales catalogs make no mention of the origin of the pieces sold, while others contain fraudulent information. This is an international phenomenon."

Virtuous Dynamics
Given these difficulties, all the speakers agreed that provenance research must be based on a solid and permanent dialogue between dealers, collectors, academics, museums and the OCBC. "We must create virtuous dynamics," said Alexandre Giquello, the representative of Drouot (through which 500,000 objects pass each year). At the Ministry of Culture, more and more questions asked by auction houses arrive at the office of the Mission for the Research and Restitution of Cultural Property looted between 1933 and 1945. Even if it is not the task of the ministry's researchers to deal with these questions, "this exchange is useful" to shed light on other research,” said David Zivie: "The links that exist to some extent [between auction houses and the Ministry of Culture], could be strengthened." For the lawyer Corinne Hershkovitch, provenance research now needs to be recognized as a scientific discipline in its own right, which raises the embarrassing question, outlined by the journalist Vincent Noce, of the "difficulty of the work for young researchers, whose jobs are still vulnerable and who are poorly paid." Permanent positions must be created for researchers from both the public and private sectors. As Conseil des Ventes president Henri Paul concluded, it is all about an "investment" essential for the future.

Nazi Plundering: The Light and Dark in the French House of Representatives
Not to be missed
Market Trends