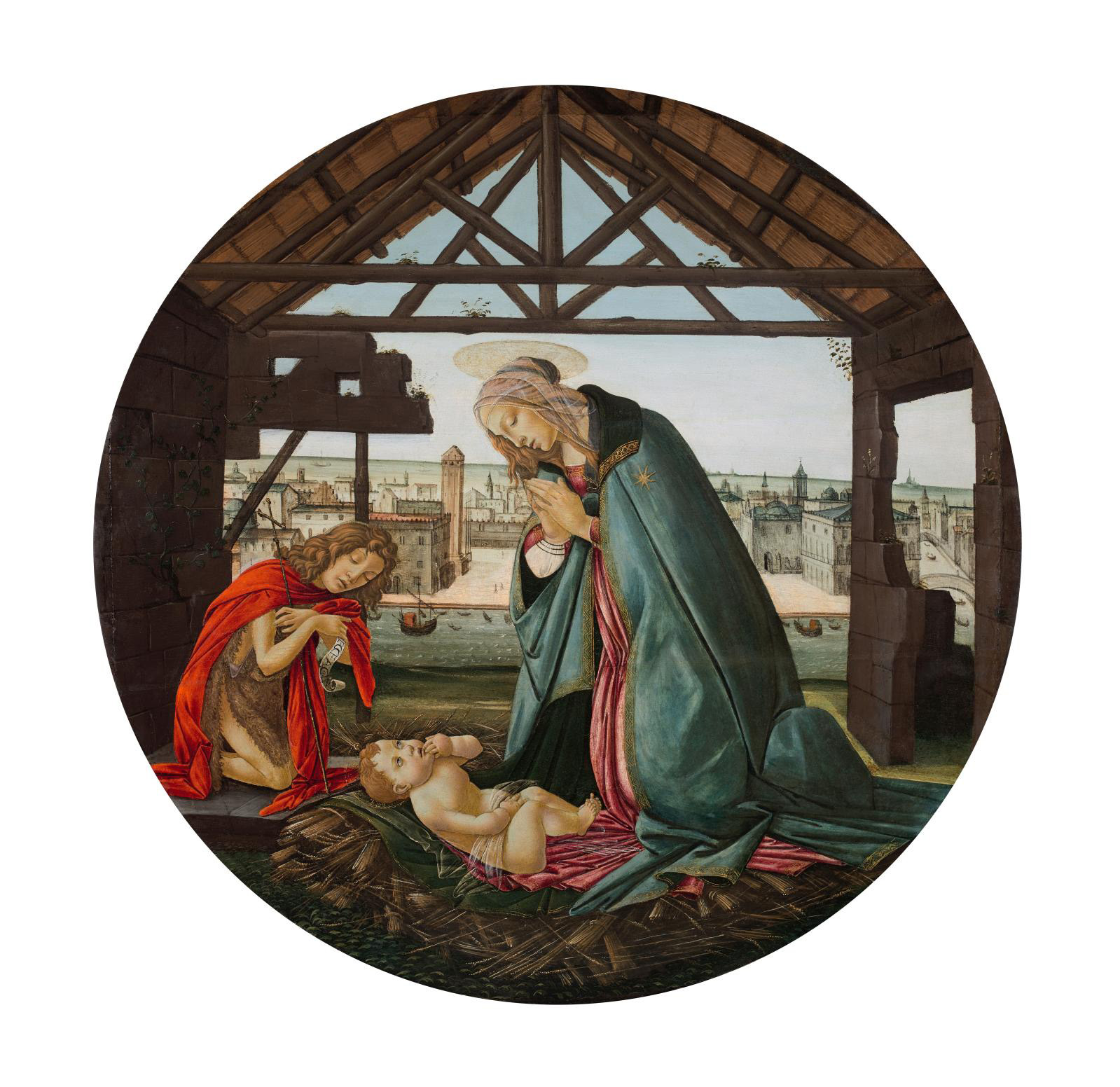 In 1920, the Finnish-Swedish art historian Osvald Sirén wrote about a hypothetical artist he nicknamed the "Master of Gothic Buildings": a student of Sandro Botticelli with a decided penchant for Nordic Gothic architecture—churches with pointed roofs, castles with high turrets, Nordic palaces with stepped gables—and a pronounced feeling for architecture evident even in his treatment of hills and trees. Sirén built up a corpus by this "new" master around a handful of works that include the tondo in the Jacquemart-André collection. Over the last century, the "Master of Gothic Buildings" has yielded almost none of his secrets, and by 2005, unlike generations of specialists, only American art historian Everett Fahy (d. 2018) had no doubts as to his existence and believed that 20-odd works could be attributed to him. The exhibition "Botticelli, Artist and Designer" will thus be a landmark for the 'Master.' Not only has Ph.D. student Christopher Daly written an essay on him in the catalog, but an entire room in the exhibition is dedicated to his work.

Memlingmania and Illusionism
Until now, the golds of The Virgin of the Magnificat, loaned by the Louvre to Montpellier's Musée Fabre since 1979, had not yet piqued the interest of art historians. But here Matteo Gianeselli, curator at the Musée National de la Renaissance in Ecouen (near Paris) remedies this injustice by proposing the Master's hand in them. Botticelli's model (now in the Uffizi) and its many variations are well known. The Montpellier copy seems identical, apart from one figure—but closer inspection reveals that its creator has replaced the original landscape with a background of small Gothic buildings. Gianeselli also sees a link with the mill, the river, the swans and the panoramic view on the right in Hans Memling's Virgin and Child between Two Angels (c. 1480, Uffizi Gallery), commissioned by Benedetto Pagagnotti of Florence. "Memlingmania", as Gianeselli calls it, is typical of the Master of Gothic Buildings. This enigmatic painter was clearly affected by the craze for Venice in The Virgin and St. John the Baptist Adoring the Child before a View of Venice in the Musée Jacquemart-André—where his version of the campanile and St Mark's Basilica demonstrates his total ignorance of the place. But his patron must have been Venetian: for him, the artist dreamed up a stable at the top of a promontory on the island of San Giorgio Maggiore (where a meadow seems to run down to the shore), mitigating the cold gigantism of the imposing roof by painting wild grass on the beams. In the distance, the figures strolling through the square or sailing on gondolas seem totally unaware of the scene in the cowshed. This rectilinear Venice is all right angles, with no undulations or curves, but no less fascinating. The illusionist, student or follower that he was, certainly has appeal.

A Blunter Pictorial Treatment
The highly convincing demonstration by Christopher Daly, who has found enough evidence in the works to draw a profile of the Master of Gothic Buildings, comes up with a name. The painter entered Botticelli's workshop in the 1480s and became a partner in the 1490s: a status that enabled him to continue contributing to the studio's output while accepting personal commissions. According to Daly, he was involved in the decoration of the Borgia apartments in the Vatican alongside Bartolomeo di Giovanni, a follower of Domenico Ghirlandaio. It turns out that one of Botticelli's best-paid assistants, Jacopo Foschi, is documented in Rome during 1492-1493, and his biography reveals "significant similarities with the profile of the Master of Gothic Buildings". Through the years, the author follows the career of this artist, also identifiable through the singular feel of his figures—"a little more rigid than those of Botticelli and characterized by calmer, almost mellow expressions"—and a technique "defined by a blunter pictorial treatment." He developed his own style in around 1500. Foschi's son, the Mannerist artist Pier Francesco (1502-1567), was well known. Now we can see his father as the creator of a highly plausible corpus. This is already an impressive advance in art history, but there is more. Daly concludes by announcing a forthcoming study in which he will present two hitherto unknown followers of Botticelli. The Florentine's swarm of assistants, like the Master of Apollo and Daphne (identified in 2016 by Nicoletta Pons), could gradually emerge from the master's shadow. This is the finest possible tribute to Everett Fahi, the first "John Pope-Hennessy Chairman" of the Department of European Paintings at the Metropolitan Museum of Art, who donated his photo library to the Zeri Foundation in Bologna. His documentation, like that of his friend Michel Laclotte, who has joined the Louvre Museum, thus continues to live and produce results.

Romanelli’s Justice for Mazarin: A Rediscovery
Newsfeed
See all news
Paris: Open House at the Père Lachaise Workshops
Preemption: Romanelli's "Justice" Is Heading the Musée du Grand Siècle
A Diamond Cross Pendant Fetches €673,100 at Drouot
London: Will the "Portrait of Omai" Enter the Collection of the National Portrait Gallery?
Not to be missed
Analyses