Paris museums may be closed, but the Hôtel Drouot remains open to art lovers!

The final collegial exhibition of 2020 offers an impressive range of artworks from all historical periods and from across the world, offering the visitor a museum in miniature. 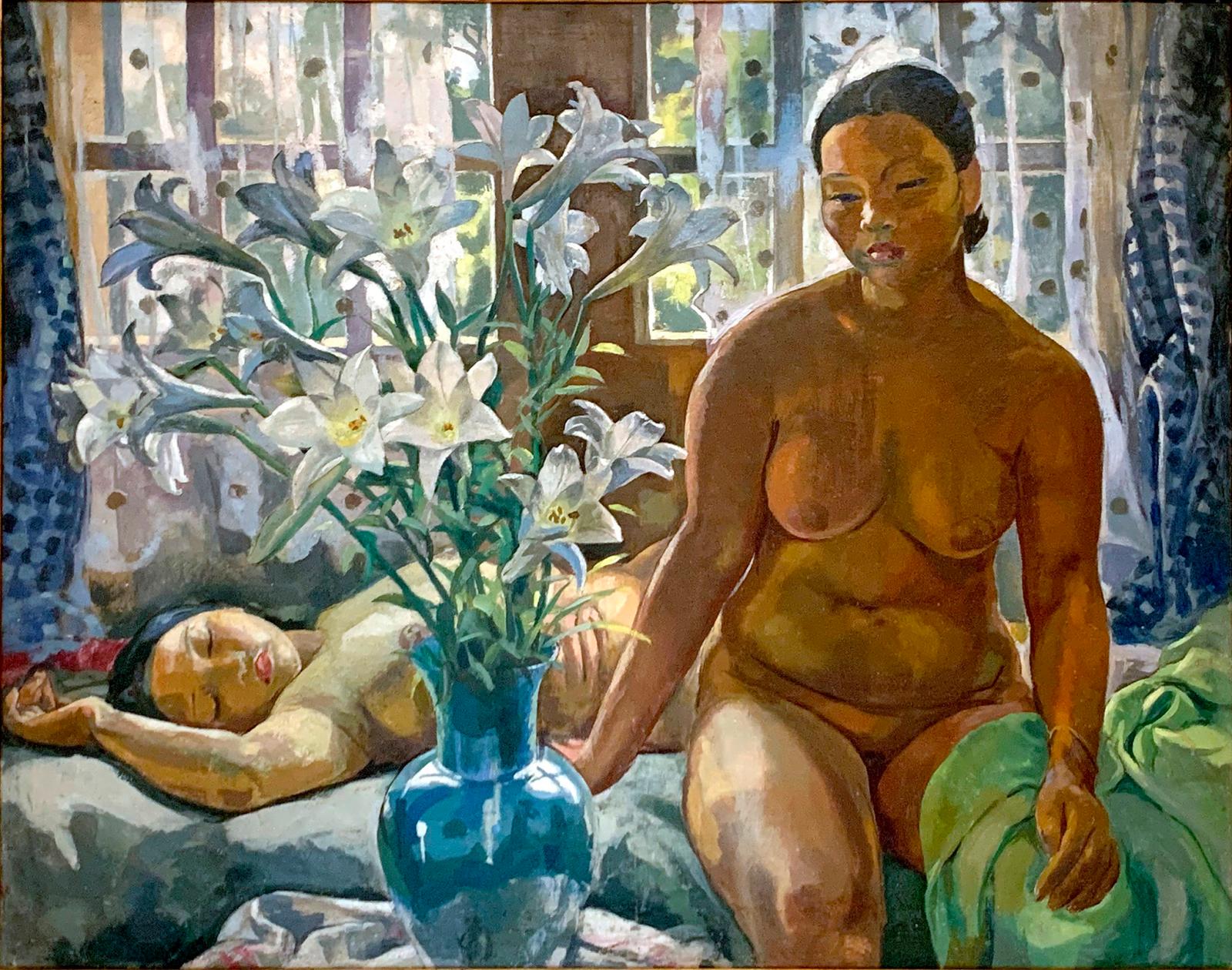 The auction houses of the Drouot are highlighting their most exciting offerings of the season in Oeuvres Choisies, on view in Gallery 7 until December 17. In terms of historical depth, the show reaches back to the Ancient Near East, with a roaring lion’s head in solid lapis lazuli (9th-7th century BCE), whose bared fangs capture the threat posed by natural forces that could only be quelled by the priest-king. Of particular historical interest is a recently rediscovered Théodore Géricault oil of a bulldog (c. 1820), a subject treated extensively by the artist across varied media, and which will be included in the catalogue raisonné of his paintings currently under preparation.

Modern Art in Viet Nam
Alix Aymé’s canvas Nudes with a Bouquet of Lilies (circa 1935) offers a providential link between a number of objects in the show. Set in the painter’s Hanoi studio, recognizable for the windows that appear in a number of her most developed compositions, the painting reflects Aymé’s masterful condensation of post-impressionist technique. Indeed, on display nearby is a 1913 edition of The Little Flowers of Saint Francis illustrated by her teacher Maurice Denis, who was a direct link to Cézanne and Gauguin. Aymé studied at Denis’ Workshop of Sacred Art and collaborated with him on the décor of the Théatre des Champs Elysées (Paris, 1913) before emigrating to then French Indochina, a twenty-five year residence that would further define her artistic practice.
An extraordinary 1938 lacquer screen by Pham Hau entitled Nine Carps pays testament to the artistic ferment of pre-war Viet Nam which was defined by the melding of Asian and European modernist aesthetics. Hau became the recognized master and a passionate defender of lacquer work, which was the object of a revival spurred by instruction in colonial institutions by Aymé and Hau’s teacher Joseph Inguimberty (1896-1971). In Nine Carps – the carp as well as the number nine are associated with happiness and good fortune –the negative space of the black lacquer becomes the surface of a pond viewed through overhanging branches, and through which we spy a lush, closely observed submarine world rendered in glistening mother of pearl and gold.

Playful Modernisms
The Blue Sofa, a large 1964 acrylic by Domenico Gnoli (1933-1970), is a particularly rare offering. The artist’s rejection of gestural abstraction and embrace of a Pop aesthetic in the early Sixties presaged the broader reinterpretation of classical tradition among Italian post-modernists. In keeping with Gnoli’s close attention to the details of ordinary life, this depiction of a banal loveseat assumes a mythic presence due in part to the texture of the sand the artist mixed with his paint. The Blue Sofa quietly intrigues with a masterful illusionism that complicates the differentiation of painted detail such as upholstery seams and shadows from the actual relief created by the pronounced materiality of the support.
Oevures Choisies, also features a Liane wall-lamp by Jean Royère, another figure who, like Gnoli, challenged the tenets of modernism at mid-century. Already known for the startling colors and fanciful forms of furniture that rejected the pre-war 'machine aesthetic', Royère introduced his Liane lighting series at the 1959 Salon des Artistes Décorateurs. Inspired by the ivy he had seen trained across domestic interiors in Scandinavia, the lamps blur the line between furniture and sculpture, with lengths of metal tubing that freely undulate across the wall surface to confound any sense of functionalist purity.

The Roots of Pre-Columbian Art
A trio of Pre-Columbian objects reflects the long exchange between Mesoamerican societies in search of ‘greenstone’. A rare and sacred material associated with the watery underworld common to all indigenous cosmologies, diorite and other minerals were sourced from the present-day Mexican state of Guerrero as early as the rise of Olmec urban culture by 1500 BCE. A Chontal figure found in Guerrero and dated to 100-300 BCE showcases the stone-working technologies, developed in the absence of metal tools, that some specialists believe originated in the region and were diffused across Mesoamerica.  A ‘Pre-Teotihuacan’ figure with a removable head pays testament to the exchange of religious symbolism that accompanied economic trade. Its ‘snarling jaguar’ mouth and careful articulation of the joints and fist strongly echo elements of Olmec sculpture and religious symbolism.
The current pandemic has deprived us of culture and inspiration. While Paris museums remain closed, why not don your mask and nurture the soul in the galleries of the Hôtel Drouot. As a selection of the objects that auction house experts are most excited about this season, Oeuvres Choisies won’t disappoint.

Indulge yourself at the exhibition "Drouot Déco"
Newsfeed
See all news
Rethinking the Reconstruction of the Basilica of Saint-Denis
Artist Kader Attia Will Curate 2022 Berlin Biennial
Dallas Museum of Art Will Return Stolen Statue to Nepal
Some California Museums Are Now Tentatively Reopening Their Doors
Not to be missed
Exhibitions
"Œuvres Choisies": An Imaginary Menagerie and More
You never know what awaits you in an "Œuvres Choisies" exhibition,…
Exhibitions
The Need for an Art of Living
Gathered and restored over ten long years, the collection currently…
Exhibitions
Claude Viallat: Still Going Strong
A new show again attests to 85-year-old French artist Claude Viallat…
Exhibitions
Happy Birthday Ropac Gallery!
t he Thaddaeus Ropac g allery was founded in Salzburg in 1983 and…