The writer lived in La Vallée-aux-Loups from 1807 to 1817. Two centuries later, the garden and the house (meticulously refurnished in period style) are as charming as ever. A trip a few miles from Paris promises a romantic interlude... 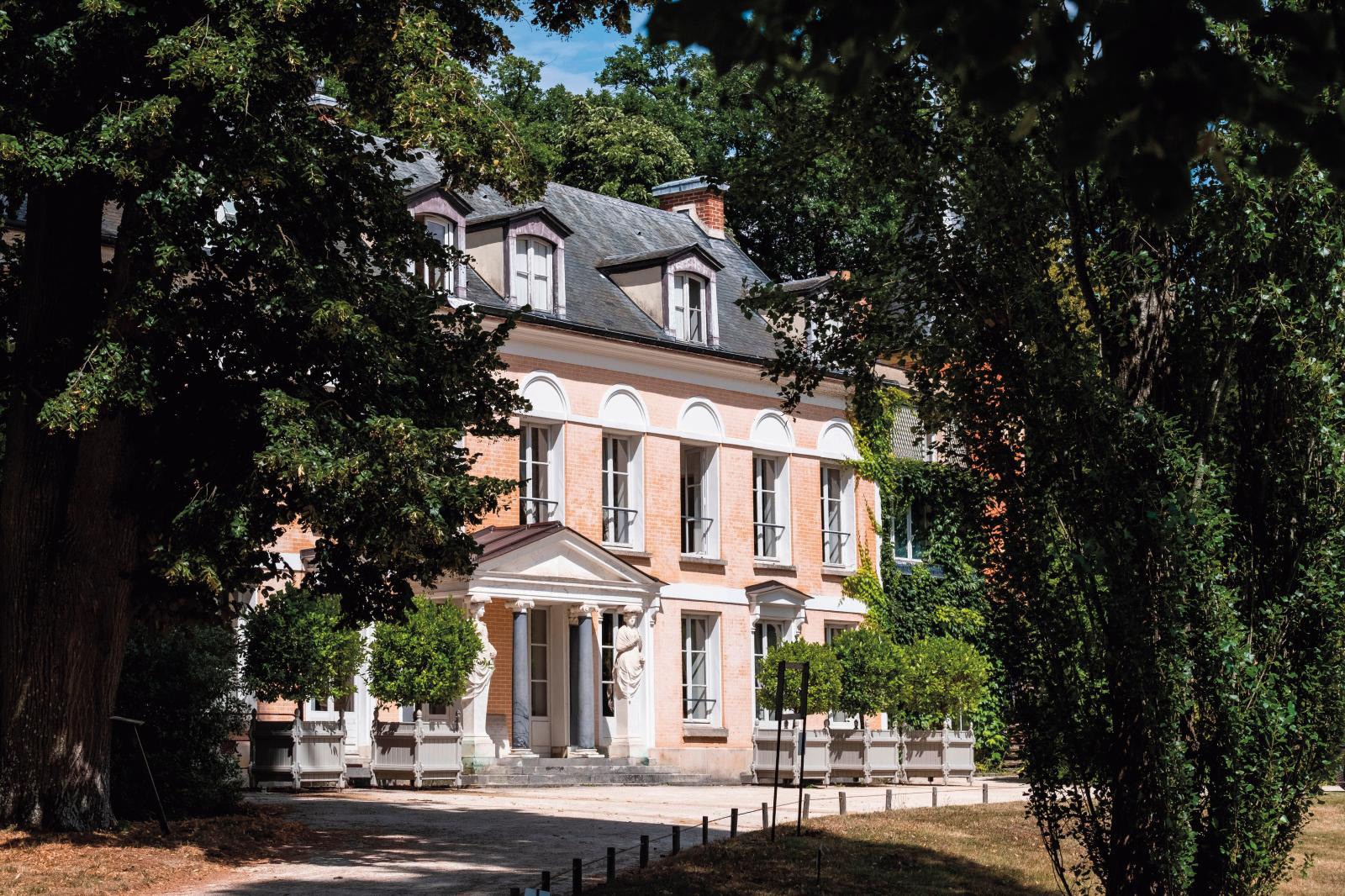 On July 4, 1807, back from a journey to the Orient, François-René de Chateaubriand (1768-1848) published an article in Le Mercure de France comparing Napoleon I to Nero. This offended the Emperor, who forced him to leave Paris. The writer had been planning to do so for several years, longing for quiet life away from the hustle and bustle of the city and a troubled political career. In August, he bought La Vallée-aux-Loups, a property in the heart of the Val d'Aulnay, and moved there in the Fall. "The repairs to my thatched cottage were lagging, so I decided to go and supervise them. We reached La Vallée in the evening. We did not take the usual route but entered through the gate at the end of the garden. The rain-soaked earth in the alleys prevented the horses from advancing, and the carriage overturned." This is how the viscount described his arrival by carriage, in November 1807, through the bottom of the property instead of the current entrance. When he bought it, the building had little of the bourgeois country house it later became, but was just a shack built in 1783 for the brewer André-Arnoult Aclocque. Flanked by a brick façade, it was falling apart. But none of that mattered: as a botany enthusiast, Chateaubriand fell in love with the garden, and shaped it from the outset in line with his personal world. "The uneven, sandy land attached to this house was only a wild orchard with a ravine and a chestnut tree coppice at the end. This narrow space seemed entirely suitable for nurturing my long-held hopes," we read in his Memoirs from Beyond the Grave. La Vallée-aux-Loups, his home for ten years, was the first property he bought to live in. At barely 40, the author had garnered his first successes with Atala (1801) and The Genius of Christianity (1802): "He was out of inspiration. The unfortunate aristocrat was hounded by the Revolution, then exiled in England. He wanted a life in the 19th century. Here, he sought to create intimacy in a place on a human scale,” says Véronique Martin-Baudouin, director of the Maison de Chateaubriand, which belongs to the Hauts-de-Seine departmental council.

Assisted by his wife Céleste and their gardener, the writer redesigned the grounds as half-wilderness, half-English garden. Many of the trees he planted—cedars of Lebanon, catalpas, bald cypresses, Aleppo pines, Greek chestnut trees and Italian cypresses—are still there. "They reminded him of his travels and he had a vibrant relationship with them. The garden had an almost shamanic quality for him. In his mind, each tree was linked to a character in his novels," says Anne Sudre, director of the Vallée-aux-Loups estate. The garden also includes several buildings, including an icehouse (soon to be renovated) and the Velléda Tower, a former chapel housing the secluded study where he liked to write, alone in the midst of nature. He also had a bachelor apartment upstairs, where he received his "madames", as Céleste called them. For their union was a marriage of reason, and the writer had numerous liaisons, including with Natalie de Noailles and Juliette Récamier. Restored in 1986, it only provides an evocative setting now, with none of his personal objects.

In Praise of Simplicity
Chateaubriand then began to renovate the architecture, which at the time included only the present central building. He added a portico with caryatids to the south façade—echoing his fascination with ancient Greece—and installed a double staircase in the vestibule, which, legend has it, came from an English flagship. The rooms were laid out traditionally, with the drawing room and dining room on the lower floor, and the private areas upstairs. "Life at La Vallée-aux-Loups was joyous, as Céleste loved to entertain. But the couple lived modestly. The furniture was rustic, and the chairs were in straw," says Véronique Martin-Baudouin. The interior decor we see today is thus a matter of interpretation. When the Département became the owner in 1967, major restoration work was undertaken to recreate a Romantic atmosphere in the spirit of the time. Listed as a historical monument 11 years later, the house opened to the public in 1987. Since then, the museography has aged, but the place has a speaking atmosphere and contains some remarkable pieces. One is the famous chaise longue from Jacques Louis David’s studio, on which Juliette Récamier posed in 1800 for the most famous of her portraits, now in the Musée du Louvre.

Evocative Furniture
"For several years, we have been tracking down objects that belonged to Chateaubriand. There are very few on the market, in antique shops or at auction", says Anne Sudre. For example, the writer’s portrait by Anne-Louis Girodet, a very fine modello, was acquired in 2015. More recently, some cutlery, a chandelier, and most importantly the bonheur-du-jour desk on which he began to write the Memoirs of my Life—the first version of Memoirs from Beyond the Grave—have returned home. In the various lower floor rooms, neither the piano, game tables, pedestal tables and armchairs (a fine set of Charles X furniture donated in 2020) nor the paintings, clocks, lamps and porcelain services belonged to the writer, but contribute to the evocative charm of an occupied house. Upstairs, the author's bedroom is now a space dedicated to what he produced there: part of Memoirs of My Life, The Martyrs (1808) and the beginning of Moses (1831). While the originals are safely hidden away, the facsimiles presented, made by the Atelier du Patrimoine in Bordeaux, are of an extraordinary quality, with highly realistic effects of wear and aging. Chateaubriand lived in the estate until 1817, when he was forced to leave for financial reasons. He then lived in a small apartment in Rue du Bac in Paris, whose setting is suggested in one of the rooms on the upper floor of his former residence. "Of all the things I have lost, La Vallée-aux-Loups is the only one I mourn," he wrote. A friend and creditor of the man of letters, Mathieu de Montmorency, bought it from him in 1818. The duke added a neo-Gothic wing (which houses the temporary exhibition rooms), a chapel and an orangery. In 1914, La Vallée-aux-Loups became the property of Henry Le Savoureux, a psychiatrist who set up a rest home there and created the Chateaubriand Society in 1930. With his wife Lydie, née Plekhanova, he held a literary salon bringing together writers and artists including Félix Fénéon, Anna de Noailles, Saint-John Perse, Paul Valéry, Jean Fautrier, Paul Léautaud and Antoine de Saint-Exupéry. Awarded the “Maison des Illustres” label in 2011, the house preserves the memory of these successive occupants who continued to keep it alive after Chateaubriand’s departure. Epochs and styles coexist, intersect and mingle, sometimes to the point of confusion. For this reason, major renovation work on the roof, the paintings and the wallpaper in 2025 will be accompanied by a complete overhaul of the tour circuit, to give more coherence and legibility to this enchanting place.
Worth Knowing
"Memoirs from Beyond the Grave: from manuscript to book. An overview of a monument of literature",
Maison de Chateaubriand, Domaine Départemental de La Vallée-aux-Loups, Châtenay-Malabry, France.
Until January 29, 2023.
www.vallee-aux-loups.hauts-de-seine.fr