Long thought to come from Damascus, Rhodes or Lindos, Iznik ceramics emerged from the shadows in the last century to reveal an Ottoman art influenced by calligraphy, illumination and the gardens of Paradise. 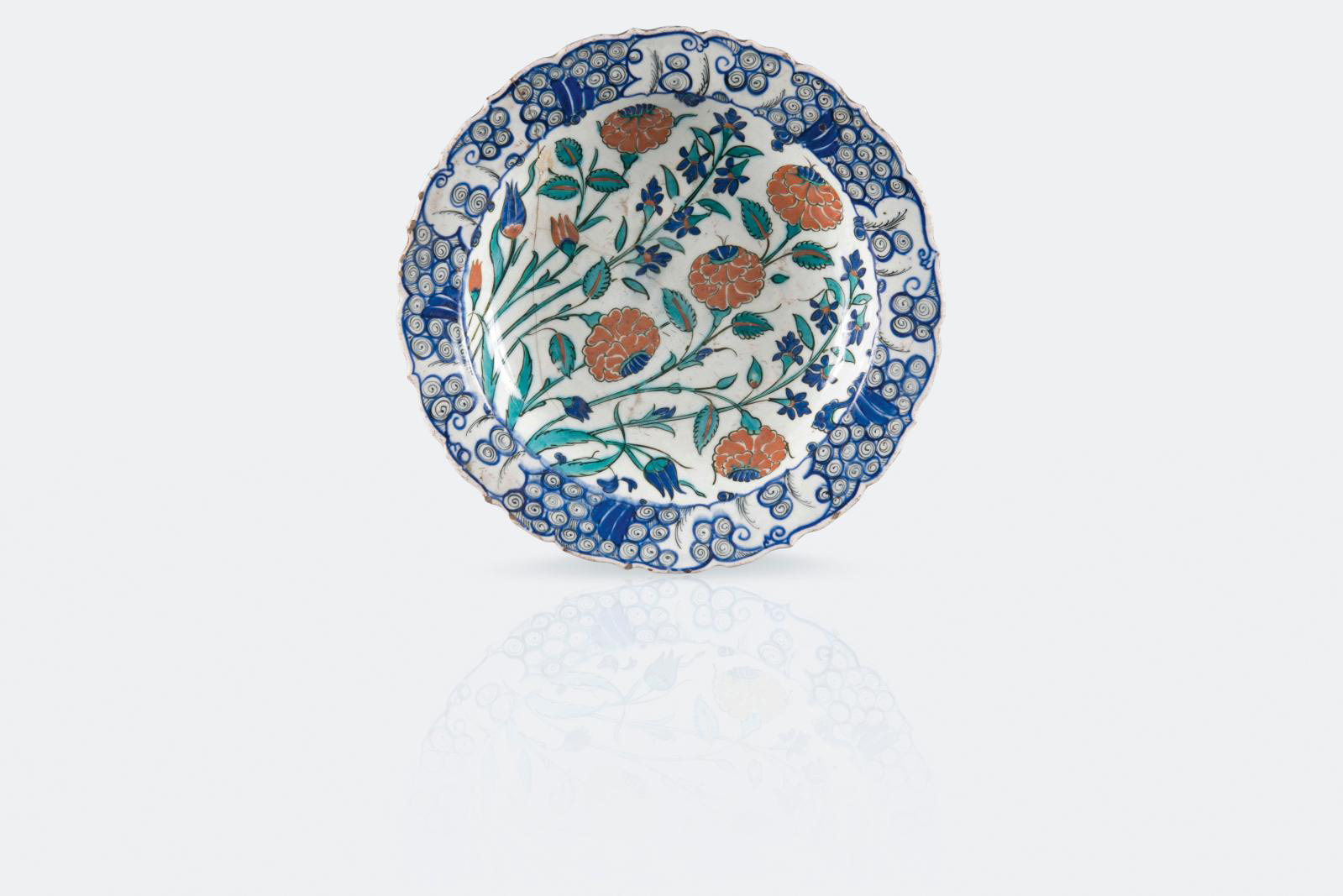 At the dawn of the 16th century, Persian potters succeeded in producing a white paste very similar to the highly sought-after kind made in China. It was not a porcelain, but a siliceous paste mixed with a high-lead frit. Combined with painted decoration under a clear glaze ensured the success of Iznik ceramics, which brought tremendous prosperity to the small city lying 100 kilometers (62 miles) from Constantinople. After the latter’s capture in 1453 by Mehmed II, an artistic policy was adopted transforming the city into a sumptuous Istanbul, with lavish architecture that was magnificently adorned. At this time blue and white Chinese porcelain was highly popular, and its sky-high cost rapidly spurred the competitive spirit of the Nakkashâne —the palace workshop—which set its sights on the workshops of Iznik, which were now financed by the State. In the early 16th century the first Baba Nakkash style decorations, created by the palace artists, reproduced variations on Chinese blue and white pieces without ever copying them. White reserves or blue foliage motifs on white slip led to the use of rumi: split palmette leaves characteristic of Iznik. Forms were borrowed from both Ming pieces and Ottoman silverware. Then the supremacy of calligraphy imbued ceramics: both shared the art of the line, and soon that of color.

The Art of the Line
The saz and hatayi styles were the glory of Suleiman the Magnificent’s reign from 1520 onwards and remained highly successful throughout the century. Both feature captivating vegetation, where long serrated and feathery leaves blossom, in the shade of which gambol all sorts of figures, both Chinese and Ottoman. Nevertheless, the hatayi style was more specifically Chinese, featuring lotus and dragon motifs. In the 1525s, a translucent turquoise blue appeared, though this was hardly ever used for lines. Ceramics aspired to the same fluidity as calligraphy and came closer to it visually when, by 1550, the blue strokes turned black. Motifs in reserve were sometimes outlined in dark cobalt blue, while a rare and fleeting palette of olive green, pink and purple with limited opacity appeared during those years, suggesting that ink specialists might have participated in developing new colors for ceramics. By the middle of the century, a few pieces employed these new shades in hatayi motifs and delicate flowering artichokes, illustrating the influence of a burgeoning floral style.

In the 1550s, slips also took on colors: blue and pink. A bright tomato red with slight relief emerged at the same time as the first tiles produced for monuments. This new resplendent shade can be found in the Süleymaniye Mosque, completed in 1559. The glaze palette now became even more closely linked with the art of illumination. While Iznik craftsmen had perfected the art of the line between 1530 and 1560, they now devoted themselves to the art of color.

The Art of Color
Odes to paradise now blossomed on Iznik ceramics. Though sometimes imaginary, plants and flowers became more naturalistic in the second half of the 16th century, and plants grown in Turkish gardens were recognizable, like carnations, hyacinths, roses and tulips. The Kara Memi style, named after the illuminator who oversaw the Nakkashâne, flourished increasingly more masterpieces featuring the new colors, including in the late 1560s a superb emerald green particularly difficult to obtain. The new naturalistic sukufe style appeared on both tableware and tiles, and mingled with the saz and hatayi styles on the walls of the Topkapi Palace baths. Sometimes the same cartoon was used several times, but the pounce pattern was always carefully modulated in terms of detail and color because, except for mosque lamps, the idea of a series or services was foreign to ceramists and Ottoman patrons alike.

During its golden age, the 1570s, this art form adorned palaces and mosques, the homes of high dignitaries and later those of a broader clientele aspiring to Iznik’s prestige. Ceramics adopted exuberant, increasingly varied forms and decorations. Christian Europe was also interested in the refined Ottoman work, and this appeal led to the creation of pieces totally unrelated to a Muslim context, such as beer goblets.

The inflationary context of the 1580s sparked Iznik’s decline. The Ottoman court had long ago established a pay scale for ceramists and this rate stagnated when production costs skyrocketed. Craftsmen had to turn down official commissions to attract a foreign or less wealthy clientele, and quality was seriously jeopardized. Within a few decades, pieces became unremarkable and even mediocre, and a few genre scenes and figurative representations appeared on everyday objects like water jars. By the 17th century, the quality of products had degenerated, but the aura lingered for a long time.

In the 19th century, artists like Joseph-Théodore Deck, Edmond Lachenal and the Cantagalli workshops in Italy drew inspiration from Iznik ceramics, echoing the development of chemical colors and the nostalgia for luxuriant nature. It was not until the research carried out in the 20th century by Turkish ceramists like Ismail Yiğit that the skills of the Iznik craftsmen were revived. Now they are even on a par with models of the 16th century.

Worth Knowing
In France an important collection of 16th and 17th century Iznik ceramics
can be found at the Musée de la Renaissance in Écouen and in the Musée du Louvre in Paris.

Treasures of Egypt and Turkey

Ger Luijten Channeling the Spirit of Frits Lugt
Newsfeed
See all news
Paris: Open House at the Père Lachaise Workshops
Preemption: Romanelli's "Justice" Is Heading the Musée du Grand Siècle
A Diamond Cross Pendant Fetches €673,100 at Drouot
London: Will the "Portrait of Omai" Enter the Collection of the National Portrait Gallery?
Not to be missed
Glossary