In the early 17th century, competition to equal or even surpass Venetian cristallo led to the creation in Bohemia of a glass resembling rock crystal even more, which found its way into Europe’s most luxurious collections. 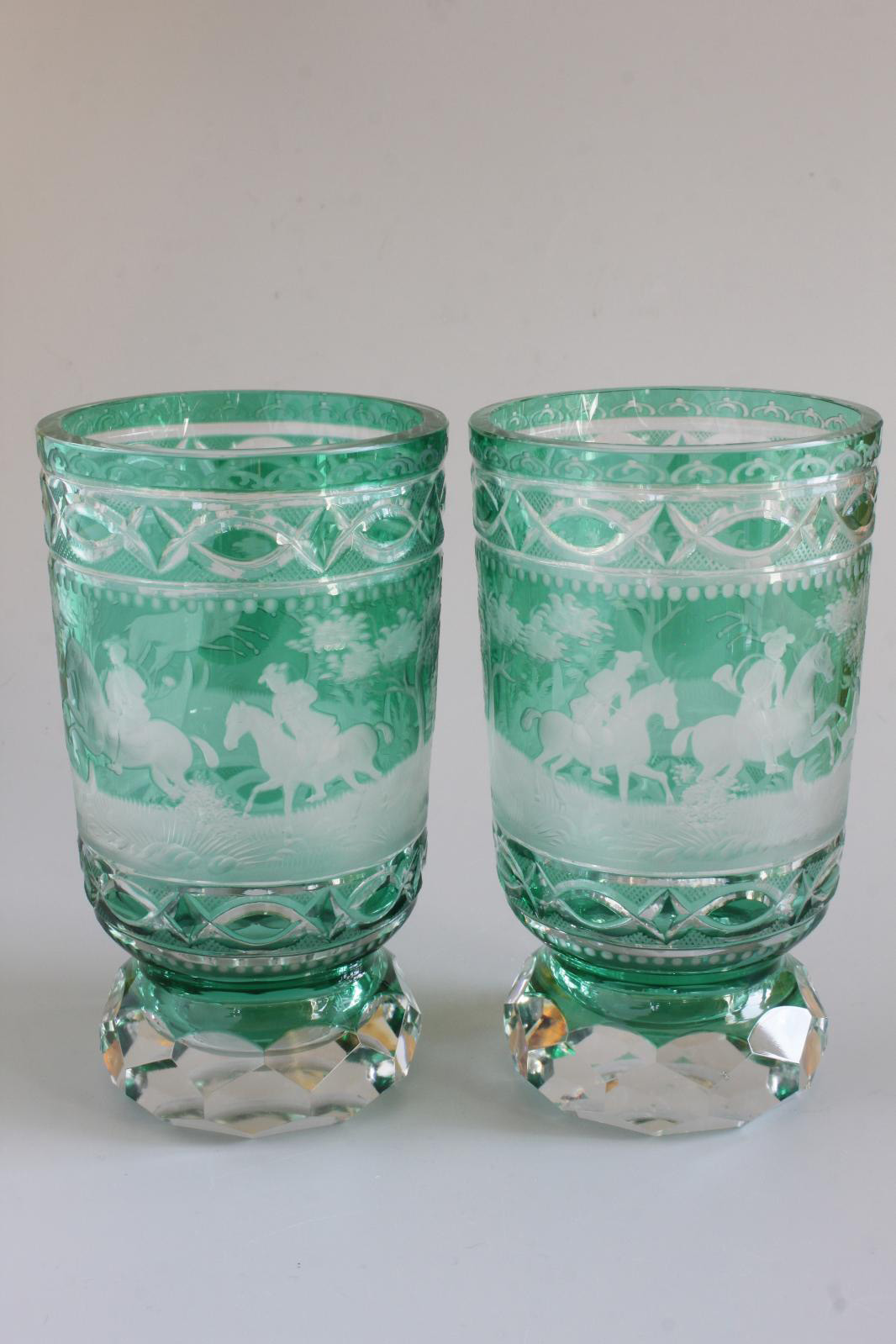 Venice’s attempts to keep the secret of cristallo were bound to fail. Glassmakers traveled for work, crossed borders, settled in places where their skills were in demand and adapted their know-how without having anything to fear from La Serenissima (Republic of Venice). Thus, in the early 17th-century Bohemian craftsmen using plentiful raw materials in their forested region developed a translucent, glittering potassium-calcium glass that was much harder yet easier to cut than Venetian cristallo. Meanwhile, Nuremberg and Prague, two curious-minded cities receptive to foreign influences had been buzzing with intellectual and artistic activity since the Renaissance. The most talented engravers and lapidaries worked there and were willing to try out their skills on the new crystalline glass. Admired for having the purity of rock crystal, it was cut, engraved and mounted in precious settings, like the rarest gems in cabinets of curiosity.

Bohemia, the new glass capital
Under the reign of Holy Roman Emperor Rudolph II (1576-1612) and the impetus of his lapidary Ottavio Miseroni (1567-1624), Caspar Lehmann (1570-1622) developed a glass-cutting and engraving process that supplanted and surpassed the beauty and reputation of cristallo. In Baroque Europe, luxury glassmaking’s center of gravity shifted to the German-speaking world. Glassware took on traditional forms, like the bulbous roemer and the pokal, famous for its lid and heavily influenced by silver and vermeil tableware. Stems cut with elegant bows or intricate facets were accompanied with wheel engraving. This method used a metal grinder—often in copper, regularly moistened and combined with an abrasive powder—while the engraver placed the piece to be cut or engraved under the lower part of the wheel. Engraving with a diamond stylus imitated drawing. Bohemian glassmakers undeniably brought these techniques to the peak of their brilliance in the 17th and 18th centuries. Delicate engravings featured allegories or figurative motifs, sometimes accompanied by mottoes. The Peace of Westphalia in October 1648 inspired armor and heraldic designs that became as popular as commemorative and symbolic ones. These costly objects’ graceful decoration reminds us that they were above all collector’s items, seldom used but much displayed. The remarkable properties of Bohemian glass were soon applied to Baroque pendants, which were exported to 17th- and 18th-century European courts.

English competition spurring creative vitality
In late 17th-century England, the invention of genuine crystal, whose molecular structure was ordered by lead oxide, threatened the supremacy of Bohemian glass, which it falsely claimed to be. It was not as strong and glistened less. Bohemian glassmakers stepped up their ingenuity. Bringing a welcome renewal to their output, they created refined pieces in a range of stunning colors, ruby undoubtedly being the most famous. The Roman formula for making dark red glass was rediscovered in 1676 by Andreas Cassius (1605-1673), who used a gold chloride solution, which Johann Kunckel (1630-1703) improved in 1679. Obtaining this shade was a complex process with an uncertain outcome, as it was hidden beneath a drab shade of gray until the finished piece was reheated. The color’s resemblance to the carbuncle, dear to alchemists, and the incredible difficulty of achieving it, contributed to the 17th and 18th century fascination with ruby glass. Other shades of red were obtained by adding copper oxide, but the result was less spectacular. Tin oxide was used to make milchglass ("milk glass"), imitating porcelain and often painted with little scenes. This taste for exquisite vignettes was also found in double-walled zwischengold glasses, where a design in gold leaf was created on a glass vessel, then sealed under another precisely-fitting glass vessel that was then bonded to the first piece with cement.
During the 19th century, tastes shifted to clear crystal except in Austria and Germany, where colored glass remained fashionable. Lithyalin glass, developed by Friedrich Egermann (1777-1864), was a splendid example. It brilliantly imitated all sorts of precious stones depending on the chosen palette. The hyalite variety, made from 1820 onward, was deep black, often combined with Japanese-inspired designs. Like cristallo in its heyday, the secret of lead crystal was eventually found out and large crystal works sprang up in Bohemia. The one founded by Daniel Swarovski in 1895 is undoubtedly the most famous. However, not everybody followed the trend. Loëtz and Moser kept using traditional processes, pushing the material to its limits without adding lead. This turned out to be a far-sighted choice. Swarovski gave up lead oxide in 2012, and many crystal works are increasingly restricting its use. But Bohemian glass will still be around for a long time.

The fragile, exquisite glass collection of Barbara Wirth
Newsfeed
See all news
Anonymous Artist Installs Monument Honoring Enslaved Explorer York
Most People Can’t Differentiate Between Human and AI-Generated Art, Study Suggests
Covid-19 Risk is Lower in Museums than Any Other Indoor Activity
Capitol Curator Seeks $25,000 to Restore Artworks and Objects Damaged in January Riots
Not to be missed
Glossary
L for lace
Lace is an intricate, openwork fabric without weft or warp featuring…
Glossary
C for Cristallo
The sieges of Constantinople in 1204 and 1453 spurred the growth…
Glossary
V for Vermeil
While all that glitters is not gold, vermeil is probably the material…
Glossary
C for cordovan (gilt leather)
Cordovan or cordwain ("from Cordoba"), also called gilt leather,…