From Charles Camoin to Albert Marquet and Bernard Buffet, the paintings collected by a vineyard owner originally from Bordeaux reflect his taste for works glorifying his adopted region of Provence. 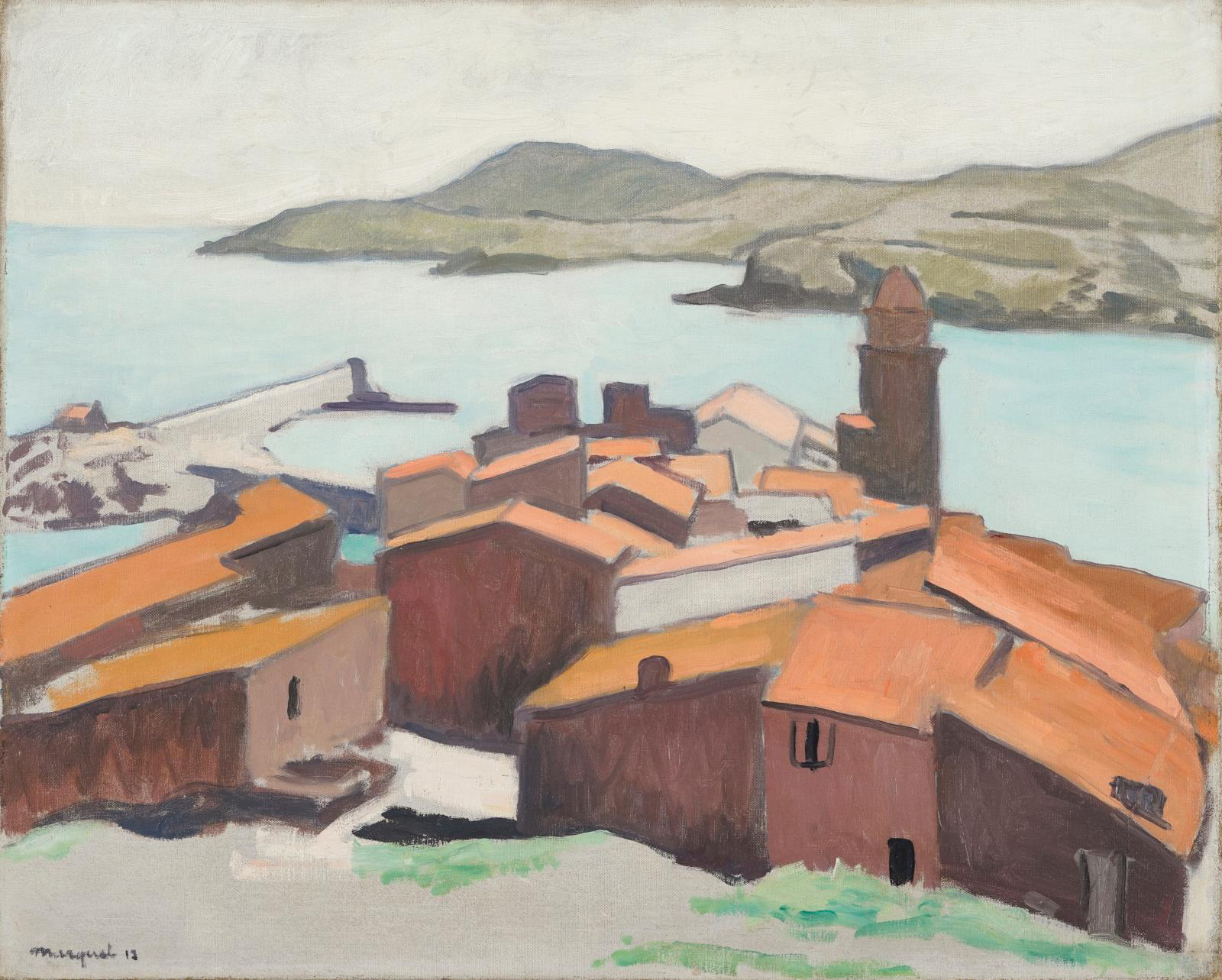 The sale of an estate always provides an opportunity to enter a private home and discover a taste that reflects a particular moment in history. Here, though the collector of this major auction of 80 paintings remains anonymous, we know various details. We know that Mr. C. came from a family that owned a grand cru vineyard in the Médoc (Saint-Estephe) and that he left his land in Gironde in the mid-2000s to start a new chapter in his life in Provence, not far from Saint-Rémy, when he bought another wine estate. There in a breathtaking setting at the foot of the Alpilles mountains, far from teeming city life, amongst vineyards and olive groves, Mr. and Mrs. C. started a new collection focusing on this much-loved region. For expert Michel Maket, the adventure was most certainly a husband-and-wife affair. "They bought pieces when they fell in love with them; their idea was to live with the paintings," he says. And indeed, they hung in every room of the house, even in most unobtrusive places. "They knew what they were buying, and developed their taste with the help of a library full of books on the artists they loved. They were highly organized, and kept all the certificates safe and sound in dedicated binders," says auctioneer Nicolas Pazzaglia.

Though it seems that the collection they assembled in Bordeaux made some forays into the contemporary world with Robert Combas (some works were sold at Artcurial on June 3 and 4, 2019), this time they concentrated 100% on the region, with "iconic names in Provencal painting from the first half of the 20th century, which families are keen to own when they have a little money, like Jean-Baptiste Olive, Auguste Chabaud and René Seyssaud", but also more famous names with a sense of heritage, like Albert Marquet, Raoul Dufy, Charles Camoin and Henri Manguin—all four connected with Fauvism—or Bernard Buffet. Almost all the paintings feature towns and landscapes of Southern France, like L'Estaque by Albert Marquet, (€18,000/25,000), Collioure by the same artist (€70,000/120,000), Bateaux à voile, Saint-Tropez (Sailboats in Saint Tropez) by Moïse Kisling (€30,000/50,000), Le Suquet by Charles Camoin (€6,000/10,000) and Les Alpilles (René Seyssaud, €2,000/3,500).

Collectors Loyal to the Same Artists
Another guiding theme could have been line and drawing because all these works are singularly architectural and structured by lines, which often surround the colors. Speaking examples are Bernard Buffet's Paysage du Vaucluse (Vaucluse Landscape), whose lines could have been drawn with a ruler, and Marquet's Collioure, a 1912 work which, with its flat tones in the foreground making the roofs dance, is "an exception in the painter's work seen by some as a form of reflection on Cubism," says Michel Maket. Considerable rigor emerges from the works of Louis Mathieu Verdilhan, with their almost abstract, elementary simplicity.

But, as with any rule, there are exceptions... There is a small deviation from these southern landscapes with Albert Marquet's view of Notre Dame (€120,000/180,000) and a drawing of a nude woman by Marcel Gromaire (1892-1971), who "built his nudes like cathedrals and treated skyscrapers like theorems".

The couple seems to have bought either locally or from Parisian galleries, mainly La Présidence and Maurice Garnier. The collectors must have developed a real relationship of trust with these intermediaries because they bought several works by the same artists: seven by Verdilhan, ten by Chabaud, five each by Buffet and Marquet, and eight by Camoin.

Bernard Buffet in the Spotlight
The art appraisal firm Maket has worked assiduously to trace the first purchasers, draw up an exhaustive bibliography and list the exhibitions where the works were shown. They also approached various specialists to validate the certificates, including the Maurice Garnier Gallery with Buffet, the Wildenstein Institute with Marquet, Claude Jeanne Bonnici with Seyssaud Gallery, Denise Bazetoux with Lebasque and the Guillaumin Committee. This collection should thus give aspiring buyers total confidence and has some affinities with the sale of June 12, 2020 in Marseille, also conducted by R&C, in which also featured Louis Mathieu Verdilhan, Ferdnand Léger and Buffet.

Five paintings by Buffet are anticipated to be a high point in the sale. As we are told by Sylvie Lévy, director of the Maurice Garnier Gallery, "there is no period in Buffet's work more sought-after than another, but the aspect that particularly interests collectors is the theme. In the collection to be auctioned in Marseille, there are iconic subjects from the artist's career, including a clown (€70,000/120,000) and a bouquet of flowers (€10,000/15,000).

Art lovers from all over the world can buy and delight in a work by this artist, who has been experiencing a comeback in recent years. "There was a sudden peak at the end of the 1980s for several reasons," says Michel Maket: "speculation, the fact that François Mitterrand's government liberalized the financial sector at that time, and intense activity from Japanese collectors. Then there was a sudden change, which I would pinpoint as after the sale of the Château de Gourdon collections conducted by Guy Loudmer in 1991. The art market was affected on several fronts. There was the ban on currency exports by Japan (a country where Buffet is very much in demand), and then the Gulf War. This downturn continued until 1995-1997. So it wasn't as if people lost interest in Buffet's work; it was the general context that went against him, as with Combas, an artist who was highly successful in the 1980s, then went downhill and only resurfaced very recently. Buffet is a great painter supported by an international clientele." This clientele will have their eyes on Marseille, on June 26, which is a city now filled with provincial auction houses where they are expert at promoting the value of international works in the region.

A Parisian Jaunt with Marquet

Albert Marquet frequently painted the banks of the Seine between Paris and Normandy, as was seen in the exhibition at the Musée Tavet-Delacour in Pontoise in 2013. But "the most sought-after works are those of the Parisian quays," says expert Michel Maket. In January 1908, the artist moved to the fifth floor of 19, quai Saint-Michel—Matisse's former studio—with a marvelous view of Notre Dame from above. He painted the cathedral all year round: for example, in the snow (Musée d'Art Moderne de Paris), in the rain (Hermitage Museum, St. Petersburg), in the sun (Musée des Beaux-Arts, Pau), and from the Louvre (Galerie Hélène Bailly). When he painted this version in 1922, he abandoned the bright colors of the Mediterranean and Fauvism for these silvery, pinkish reflections, always veiling his canvas in a light mist. "It is interesting to see that after the Fauvist period, which was something of a firework display, artists like Maurice de Vlaminck, André Derain and Marquet developed a softer palette, as if Fauvism had enabled them to express their individuality," says Michel Maket. This work has a glowing pedigree and references: exhibited in 1925 at the Bernheim-Jeune Gallery, bought by Mr. C. at the Galerie de la Présidence, and exhibited at the Musée Carnavalet in 2004 in the exhibition "Marquet: Views of Paris and Ile-de-France". "This is the jewel in the crown of a superb collection," says the expert.
Modern paintings
26, rue Goudard - 13005 Marseille
Prado Falque Enchères
Info and sales conditions
Catalogue