Francis Maere, as Busy as a Bee

As President of the Royal Chamber of Belgian Antiques Dealers and a dealer himself, Francis Maere juggles two hats, promoting Belgian artists in his garden in Ooidonk and his gallery in Ghent. 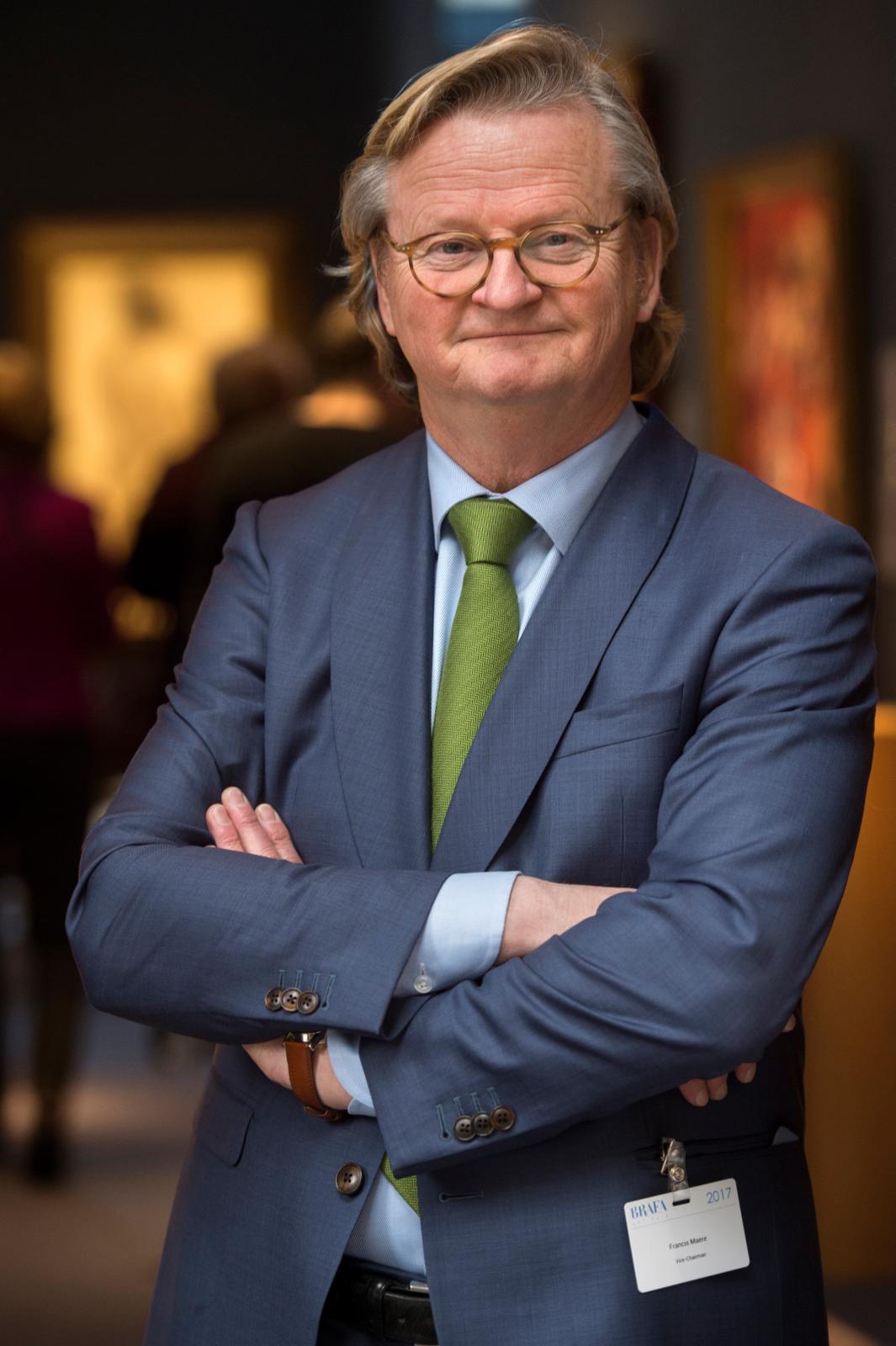 You are set up in Ooidonk, a charming Flemish country village, but also decided to open a branch in central Ghent six years ago – why?
Setting up in Ooidonk in 1995 was a gamble. It's a delightful place: a real picture postcard in the Flemish countryside, with its shoreline leading to the château. This idyllic image has brought plenty of strollers and antiques lovers to my door, particularly at weekends. I'm not the only one to have made this choice: Guy Pieters and Oscar De Vos also have galleries in nearby villages. It's rather a Belgian speciality, all these galleries springing up in the countryside. But attitudes are changing, like buying habits, and it was high time to return to the city in search of a new, more international clientele with higher standing. So I took over the rooms on the first floor of a Baroque palace in central Ghent: the Hôtel Falligan, an 18th century mansion owned by a private club for the French-speaking Flemish nobility. I stage two major events there each year, focused on founding artists of the post-Impressionist Luminist school and the Laethem school, which I champion to the hilt.

Tell us about this school of painting, little known outside Belgium…
At the very end of the 19th century, artists of the Ghent Academy, who had gathered round the powerful personality of the sculptor George Minne, fled the city and its social revolution to found a colony in Laethem-Saint-Martin. These first arrivals sought their inspiration in the past, particularly in the Flemish Primitives, who had been celebrated in 1902 in a major retrospective in Bruges.

Did the movement carry on afterwards?
Yes, but in a different way. In the early 20th century, a new wave emerged in the area around Ghent, particularly Ooidonk, who included Émile Claus, Jenny Montigny, Anna De Weert and Léon de Smet. Influenced by Impressionism, they began to explore Luminist painting. At the same time, a second group formed in Laethem. After the moral crisis caused by the war, Gustave de Smet, Frits van den Berghe and Constant Permeke initiated an expressionism profoundly rooted in the Flemish culture. It brought them instant success. Their painting is relatively unclassifiable: its exponents absorbed all the influences of European modernists, and yet their work was typically Belgian.

Is that why their market has remained very localised?
It would take real dynamic energy to establish these painters in the international scene. In the 1980s, Sotheby's and Christie's laid on some specialist sales featuring them, and now Pierre Bergé & Associés are trying their hand in Brussels by including them in more general sales of Belgian art. Meanwhile, I promote them in the major fairs I take part in. Their clientele is gradually becoming more cosmopolitan. It needs similar initiatives for this market to come out from the shadows.

Since 2017, you have been President of the Royal Chamber of Belgian Antiques Dealers. What role does this play?
The Chamber is a Belgian corporation of antiques and art dealers, headquartered in the historical Sablon district. To join it, you need to be introduced by two sponsors who confirm your credentials. The Chamber's task is to strengthen the profession with the public authorities and champion its members. It also monitors compliance with the code of ethics and promotes the activity of its members. It has to function as a union, providing certification for private individuals. Dealers must be able to rely on a body that rubber-stamps their reliability – a kind of guarantor. It now contains 120 members within and outside Belgium, particularly from France and Britain. That's another specific aspect of Belgium: we are a small country, so we really need to "think European".

"That's another specific aspect of Belgium: we are a small country, so we really need to think European."

What are your links with the Brussels Art Fair?
The Chamber is the parent company, the one that created BRAFA in the early 1950s and helped it develop. Chaired by Harold t'Kint de Roodenbeke (who was very recently reconfirmed in his duties), the fair is now right up among the top events, in second place after Maastricht. As we know, barely 25 years ago, BRAFA was still a tiny local fair! It was highly intelligent of its managing team (a small group who work well together) to make it international and open it out to contemporary art, while preserving its intrinsic character as a non-specialist fair. An idea it should always keep in mind, incidentally, so as not to get lost in too much contemporary stuff, which could work against it.

In 2019, the Royal Chamber of Belgian Antiques Dealers will be celebrating its centenary. What are you planning?
A book in which each of our members will present themselves, reminding everyone that our Association, created in 1919, was the world's very first professional chamber for the arts. At the time it was called the "Union of Fine Arts and Curiosity". Rather nice, don't you think? But now we need to look to the future, and become a voice that carries more weight in the international scene. Our members expect that of us. There are three chambers in Belgium: ours, the experts' and the sales chamber. I want there to be more coordination between us. And to share our curiosity, as ever…

Is a Return to Belgian Art’s “Golden Age” Possible?