The Walking Man recently left La Piscine, a museum in Roubaix, where it opened the retrospective on Eugène Dodeigne. Here the sculptor from the Nord region of France explored the aesthetics of the non-Western arts in a quest for the sacred. 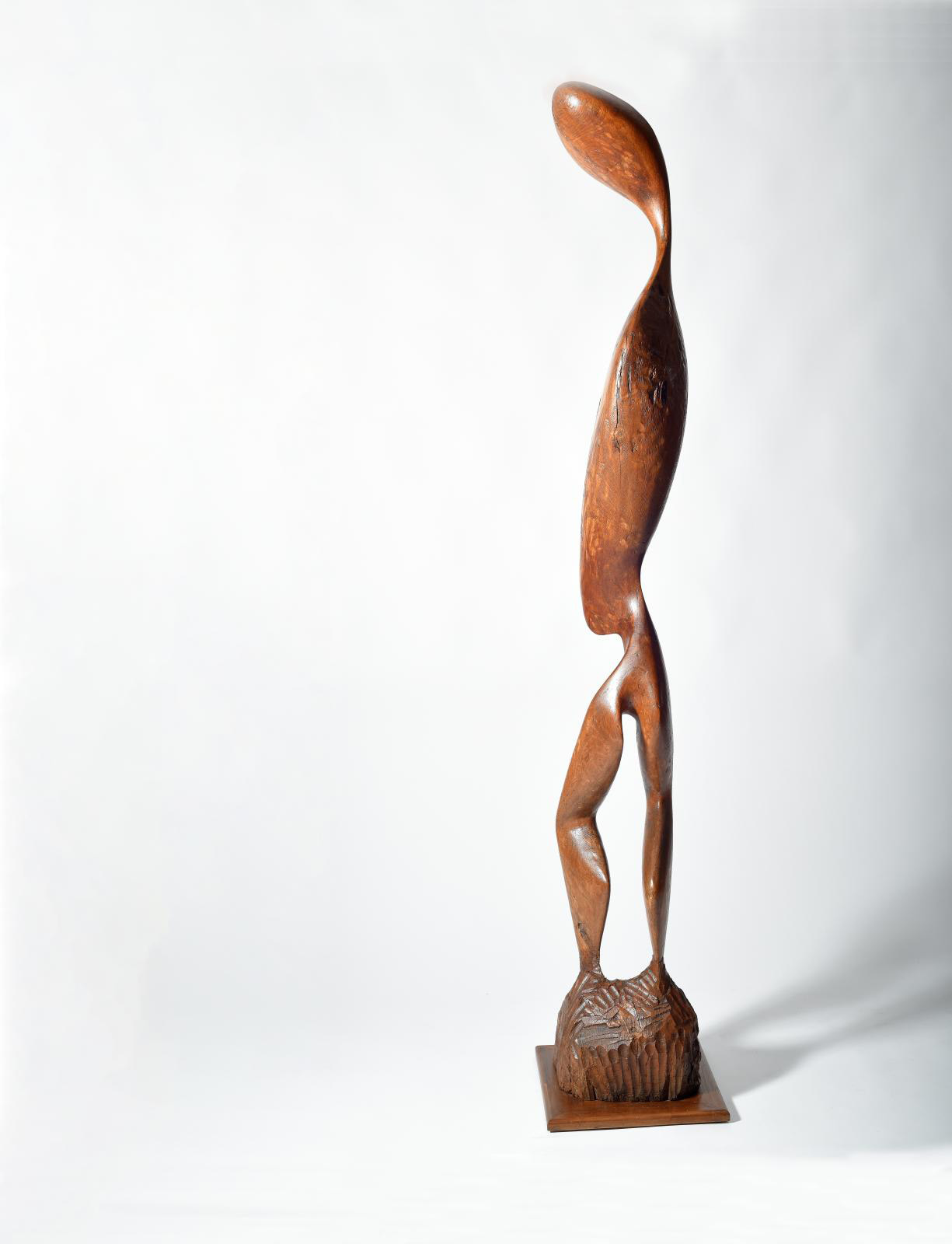 The sculpture is featured on the cover of the catalog for the exhibition that ended in March at Roubaix's museum La Piscine: the very first retrospective on Eugène Dodeigne. Perched on the artist's shoulder like a hunting trophy, the sculpture L’homme qui marche (The Walking Man), like its creator, knew nothing of the journey awaiting it then. In this black and white photograph, Dodeigne poses in front of the house he built in Bondues, near Tourcoing, where he studied at the School of Fine Arts. The future of the child who moved to the Nord region from his native Belgium was all mapped out.  His father, Armand, was a stonecutter who perpetuated a long family tradition in his marble yard in Mouvaux, where Eugène grew up among blocks of rocks. While stone—especially the famous bluestone from Soignies—eventually became his trademark, the sculptor first worked in wood, refining a highly personal style.

Carved in oak, The Walking Man marked a turning point in Dodeigne's career. The 1953 work was a great success when it was exhibited in 1954 at the Galerie du Jardin in Roubaix alongside works by Picasso, Léger, Braque, Miró, and Bernard Buffet. It was immediately bought by the collector Jean Masurel, and then went to the painter Arthur Van Hecke (the statue can be seen in one of his paintings at the Musée d’Art Contemporain in Villeneuve-d'Ascq) before finding a home in the library of the Calais surgeon and collector Albert Habart, in 1957.

Eugène Dodeigne and his wife Michèle led a bohemian life. When they were not living with their parents or in a community with other artists and musicians (Dodeigne was a trumpet player and jazz lover), they could count on support from patrons well-known for their intuition: Roger Dutilleul, one of the first to buy Braque and Picasso from Kahnweiler, Philippe Leclercq and above all Jean Masurel, who lived close to Armand Dodeigne's studio and recognized Eugène's prodigious inherited talent early on. Without knowing it, they all set him on the path to international recognition.

The Prism of Non-Western Art
On loan from Christian Habart during the Roubaix exhibition, The Walking Man was reunited with his Wife and Child, from whom he had been separated in 1953 to the artist's great regret. The wooden colossus, the giant protector of the trio, opened the retrospective with 185 pieces, representing 60 years of creation. It was the third time the sculpture had been shown in the Dodeigne's region, a local genius whose works are scattered throughout the region (the fountain of the Place de la République in Lille, the museums of Villeneuve-d'Ascq, Dunkerque and Calais, and the University of Lille).

Masurel's protegé was 30 years old in 1953, the year he achieved recognition and produced The Walking Man. In Paris, a new artistic world opened to the artist who had hitherto considered himself more a provincial craftsman. He frequented museums and became fascinated by the Musée de l'Homme, where he assiduously sketched objects that shaped his humanistic art and established him in the purest northern tradition. His bent for "primitive" art found expression during those years through painted and sculpted effigies that also evinced the impact of Modigliani, whose works he admired when he was staying with Masurel. The ethnic arts became established as an influence and Dodeigne, until then moving against the current of his times, launched boldly into modernity. Dutilleul wrote of The Walking Man that it was "a delightful sculpture somewhat in the style of the day: Arp, Brancusi and Henri Laurens, without the solids and voids."

It was unsurprising that the artist followed in their footsteps. After all, he said that "sculpture, is primarily abstract. It speaks of relationships between forms and passing light." Here, with a gentle, sensual touch, he gives poetic expression to the anatomy with a spiritual note reflecting both primitive and the Romanesque art he discovered in Vézelay, in Burgundy, France. "My work is evolving and becoming more purified," he wrote in a letter to Masurel. The artist strove to attain the sacred in a tormented quest for the essential: "I studied the writings of Mondrian (published mainly in America not long ago). The goal is to purge all that is subjective in favor of the objective."

The Silent Talker
Like Brancusi, he was attached to the notion of the statue, portraying human figures with liberated forms, mostly straight and immobile but occasionally bent or crouched. The Walking Man is an aesthetic feat that makes a clear connection between the megaliths of Carnac, the saints in Romanesque portals and the primitivism of Derain and Zadkine. Naturally taciturn and little inclined to talk about his work, Dodeigne produced a silent talker, a tall figure whose essence eludes us, despite its heavy presence. "We feel a strength and an interiority that has few equivalents in the sculpture of his time," says French historian and former president of the Musée d'Orsay, Serge Lemoine. A sculpture like this inevitably moved away from the learned rules of academism, seeking to distance itself from reality. A rare example of minimalist simplicity in a somewhat blunt and monolithic group, The Walking Man adds to the diversity of a corpus that rebelled against aesthetic theories. In Dodeigne's succinct summary, "it is what it is."

Jean Touret and the Resurrection of Les Artisans de Marolles