Invited to the Conciergerie for a carte blanche exhibition, the Ghanaian artist presents a sensitive circuit in harmony with the venue and its history, with works full of understated majesty. 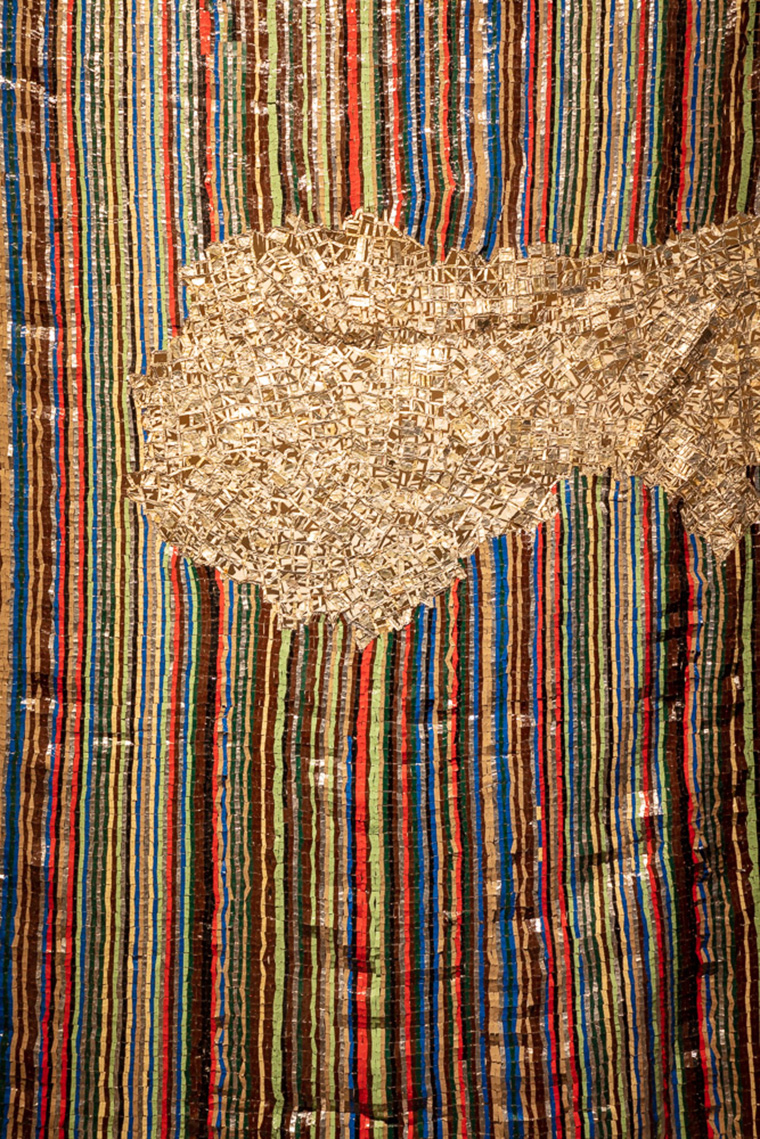 Initiated by the Centre des Monuments Nationaux in collaboration with the RX gallery (which represents the artist in Paris), El Anatsui's installation En quête de liberté (Looking for Freedom), initially planned for December 2020 but postponed due to the pandemic, takes over the Salle des Gens d'armes (Hall of the Soldiers) in the Palais de la Cité. Curated by N'Goné Fall, general curator of the Africa 2020 Season, this monumental yet minimalist work is spread over the 18,298 square feet of the 14th-century refectory of the French King's officers, with various iconic pieces from his corpus and others revealing a more unexpected aspect of his talent.

In a peaceful, muted, almost silent atmosphere, two large "rivers" run the length of the room: two videos showing the movements of the Seine, projected onto lengths of parachute canvas laid on wooden railway tracks and made to undulate through a system of fans. "At the request of the artist, who could not travel, they were made in the fall of 2020 by the artistic production team Factum Arte of Madrid, with support from London's October Gallery," says Cécile Rives, the Conciergerie's administrator. The reflections of the sky, the trees—whose yellow leaves float on the surface of the water in this season—and the surges in the river as boats pass by produce a highly poetic effect.

On either side of these "rivers", whose arrangement also echoes the pointed arches of the Gothic vaults, four large metal "capes" are displayed in the fireplaces. The brilliant tones of these mantillas (made from bottle caps and soda cans in the artist's Nigerian workshop in Nsukka) play with the lighting and the colors of the stone. At the back of the huge refectory, two somewhat more imposing pieces facing the room make a majestic sight. Finally, at the sides, fifty facsimiles of rocks invite visitors to sit and quietly contemplate this meditative, even introspective installation that simultaneously evokes water (the Seine), air in the form of wind, fire in the lighting and reflections, earth (wood and minerals) and metal. "Water can also be seen as a metaphor for the passage of time and the sculptures as doors to this time," says Cécile Rives.

Awarded the Golden Lion at the Venice Biennale in 2015, and the Praemium Imperiale prize in 2017, the 77-year-old sculptor leaves viewers plenty of latitude to interpret his carte blanche exhibition and "remake history" as they like. However, this show undeniably speaks of confinement and transit, through the Seine "captured" in situ and the presence of these shimmering skins of recovered metal. Beyond its ability to transcend the powerful medieval architecture through its discourse and delicate plastic quality, this is a compelling exhibition for several reasons. Without overdoing it in any way, it initiates an intimate dialogue with the public and the monument by suggesting a new reading. Above all, this is the artist's first solo show in France, though Chantal Colleu-Dumond, director of the Chaumont-sur-Loire estate, had an excellent idea to include some of his pieces in her permanent program starting in 2015. In 2021, visitors will leave the Conciergerie with a sense of energy and serenity.

Paris: A September Jammed Packed with Art Fairs and Shows
Newsfeed
See all news
Gallerie dell'Accademia in Venice Expands with a Focus on the 17th and 18th Centuries
Nominees Named for 2021 Prix Marcel Duchamp
American Artist Rick Lowe to be Represented by Gagosian
K-Pop Group BTS Present the Met with Gift on Behalf of South Korean Government
Not to be missed
Exhibitions
The Hôtel Drouot Reopens for the Season with the “Oeuvres…
The opening of the Drouot season is marked by "Oeuvres Choisies",…
Exhibitions
The New Woman Behind the Camera
Now at the Metropolitan Museum in New York and then on to the National…
Exhibitions
Gardens at Giverny, from Monet to Bonnard
Composed, like a huge bouquet of about a hundred paintings, drawings,…
Exhibitions
The Giacomettis, a Family of Creators
We all know that Alberto Giacometti was talented, but what do we…