Though the two previous editions were canceled, the third edition of District 13—purely French this year—now consolidates the happy marriage between street art and Drouot. 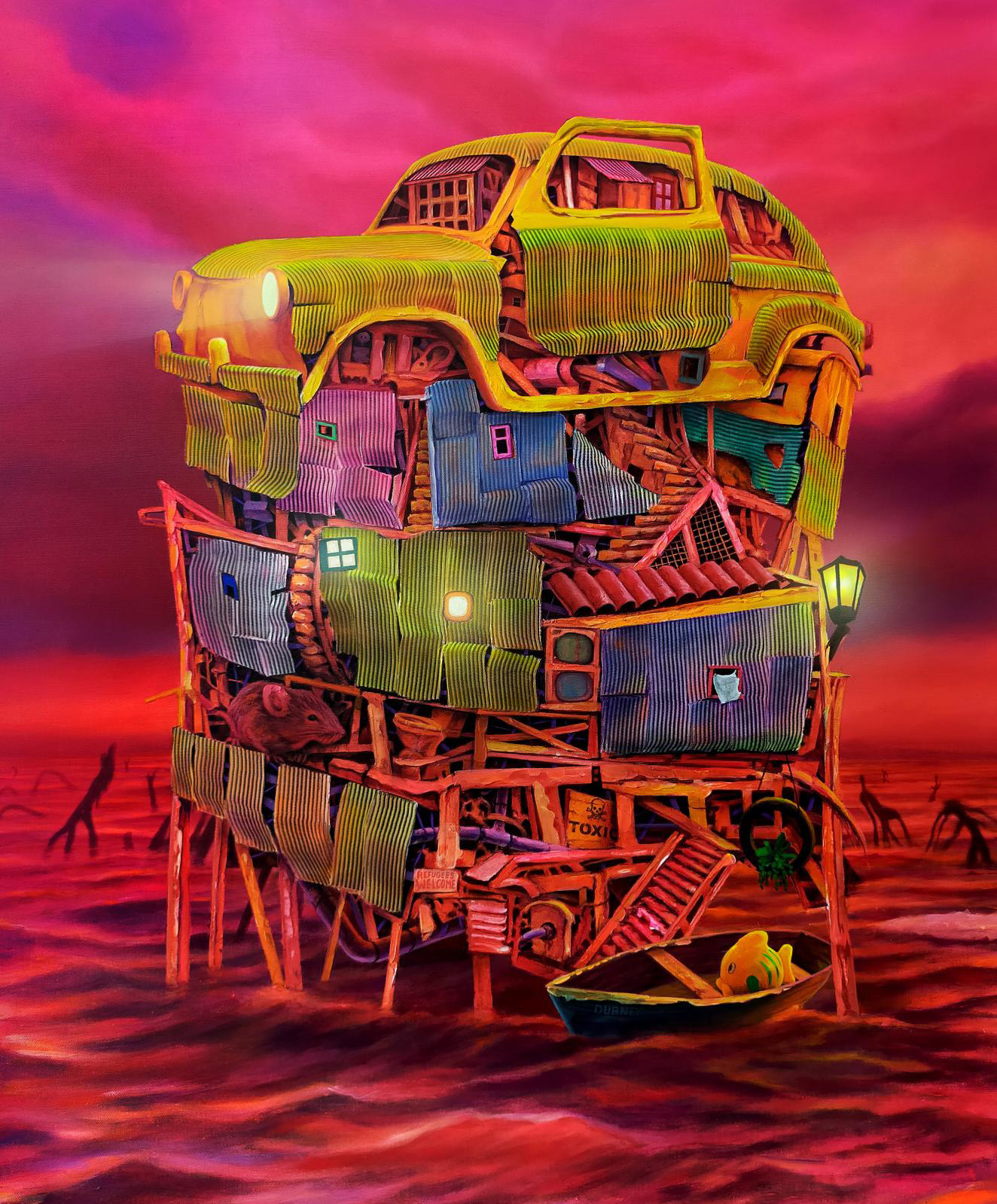 While the announcement of the creation of an urban art fair at Drouot prompted surprise at its inception in 2018, it must be said that the formula has proved its worth and participating galleries have taken a liking to it: "The conditions at Drouot are optimal, with all the logistics, lighting, storage space and elevators, and plus we meet collectors we normally don't meet at other fairs like the Parisian Urban Art Fair at the Carreau du Temple," says Édouard Mazel (Brussels). A "Mecca for Old Masters and classical art and for the secondary market too," in the eyes of Virginie Barrou Planquart (Val d'Oise), Drouot enjoys a certain prestige as "the oldest auction house in the world," to quote Claude Kunetz of the Wallworks Gallery—who for the first time joins the 24 exhibitors of the 2022 edition with new pieces by Hendrik Czakainski (between €7,000 and €15,000). This "nerve center of the art market in Paris," says Mehdi Ben Cheikh, organizer of the fair and director of the Itinerrance Gallery, "attracts collectors familiar with contemporary art and open to street art." This is partly what convinced Loup Trentin-Bosquet of the Nîmes-based gallery Corps et Âmes and also Virginie Barrou Planquart, who views the event as an opportunity to refocus on the Paris market in a disquieting global health context, whereas she had hitherto been attending fairs outside France, in Hong Kong, New York, Miami, London and—new in November—Hamburg.

New Galleries
The list of participants reflects this geographical contraction and a fresh focus on a decidedly French edition, which with 14 newcomers has a very high renewal rate. The uncertainty caused by the pandemic has affected galleries from North America. However, "even if it was more difficult to travel and bring works from Chile," according to Bertrand Coustou, founder of the Bahia Utópica Gallery with his wife Nancy Arancibia in Valparaiso (the international street art locale where Inti comes from), he has not canceled anything. The stakes are high, given the many fairs that have thrown in the towel, as he is sorry to see. We note the presence of two Tunisian galleries: the very new Central, created in 2018, and Yosr Ben Ammar; the London Graffik Gallery (a Banksy specialist) and Poland's Brain Damage, the only one in this country to focus on graffiti writing and its development, and which, before becoming a gallery, started out by publishing a magazine (as happened with Graffiti Art magazine in France).

Even if the number of countries represented has shrunk drastically, we know that urban artists have an international playing field, as witnessed by the festivals, the venues around the world where they exhibit and careers like Franck Noto's (alias Zest) at the At Down Gallery. Chosen for the 'Private Choice' selection in October 2021 during the week-long FIAC, "Zest returned from Dubai, having painted frescoes around the world and with his prices doubling in a few years," says Nicolas Pinelli of the Montpellier-based gallery, which will present works created especially for District 13 (around €13,000). Crossovers are multiplying and the eye is evolving: for example, transversal galleries like Mazel and Taglialatella (Paris) respond to market reality. The former's artistic direction has a seemingly improbable range encompassing Hubert Le Gall's designs, the drawings of Vincent Corpet (who was once with Templon!) and here, the paintings by C215 (around €8,000), at a stand designed specifically to reflect the spirit of Drouot. Levalet subverts musical instruments and antique objects (between €1,700 and €4,000) and Martin Whatson inscribes his handwriting on old paintings (around €12,500). As Jean-Marc Scialom, urban art expert for Blanchet & Associés, says, "until now, auction houses were a little reticent and considered street art to be secondary— except that Warhol had taken Basquiat and Keith Haring under his wing because he saw a continuity between Pop art and street art." Nadège Buffe of the Taglialatella Gallery has grasped this and will be creating a dialogue between Basquiat silkscreens (€30,000), editions by Invader (€12,000 to €30,000) and Kuka's new explorations of the figure of the Marianne (€5,000 to €10,000).

Emerging Scene
Mehdi Ben Cheikh explains what lies behind his artistic direction: "District 13 Art Fair's role is to shine a light on artists who are not yet established. Going beyond top-billers like JonOne, Banksy and Shepard Fairey, we are presenting talents like Lobsang Durney from the Bahia Utópica Gallery, a contemporary artist from Valparaiso who lives in Barcelona. He mainly paints surreal, post-apocalyptic worlds, mingling realistic and imaginary subjects to underpin his commitment. We also have the good fortune to be showing Lucas Ribeyron [between €400 and €1,500—Ed.] from the Taglialatella Gallery, whose theme is video surveillance and its control system. He explores the ambivalent relationship to the image inherent to his essential approach, bringing to light the distortion of reality we are subjected to but do not see. During the fair, he will be laying on a silkscreen workshop." Beyond market trends, some artists stand out, like Rnst, who has built up a community around him. Benoît Maitre of Lavo-matik (Paris) says: "He is unique. His subjects are current events, and his social issues transcend the artistic dimension. People are very responsive to his condemnation. Dirty kids inciting disobedience, rebellious young punk girls, crippled animals, and so on. Rnst talks about ecology, patriarchy and extremism. When he puts his silkscreens up for sale on his website, they sell out— though not as quickly as Shepard Fairey's (four hundred prints in under five minutes!). Benoît Maitre always keeps a few (around €120) alongside one-of-a-kind works on canvas or concrete (between €1,500 and €5,000). An opportunity to remember that multiples are inherent to street art, where the concern is to enable the public to acquire works at low prices (under €300). This will be illustrated by the Anagraphis Studio (Montpellier), a silkscreen print publisher that works with Mist, Hervé di Rosa and Crumb, among others, and can "produce color prints in runs of 25 to 30, which is rare," says Louis Angles. He is displaying his gems at Drouot for the first time, including a rare piece: a portfolio of twelve major artists, including Psykoze, JonOne, Lek, L'Atlas, Tank and O'Clock. But here, with an edition of only seven, it will cost you €7,000...

An auction extending the fair

It's always a delicate and perilous exercise to stage an auction at a fair where galleries sell works at fixed prices, and where results can be disappointing for lack of bidders. But this is Drouot, and as Mehdi Ben Cheikh says, "The auction closing the event also proves how effective this partnership really is. After Picasso, Matisse, Braque and Dalí, some of the top names in the history of art, it will be the turn of urban artists to face the verdict of the hammer. This partnership enables us to establish urban art further as a vital trend in contemporary art." While some galleries have agreed to place lots, others like At Down don't see the point, because, as Nicolas Pinelli says, they have "a receptive audience with whom our artists sell very well." This is why Geoffroy Jossaume, director of the GCA Gallery (Paris), who donned his former hat as an expert for this sale orchestrated by Drouot Estimations, preferred to limit the lots to about 30 to emphasize the allusive side of the sale, while opening it up to artists not necessarily represented in the fair, and choosing works that will not go over the five-figure mark. "For JonOne, for example, there won't be any big pieces like the ones that usually go up for auction. The sale should not undermine the fair," says the man who also has a stand as an exhibitor. Examples are Cleave 06 by Add Fuel (estimate: €7,000/9,000), Solar Flare by INTI (€10,000/15,000), Pentimento by Vhils (estimate: €1,500/2,000) and Shepard Fairey's Peace Wreath (€20,000/30,000). It is also important to be representative of a market where prices have certainly evolved over the last ten years, but where Banksy's multi-million works are only an epiphenomenon. "Whoever carries off Shepard Fairey's superb stencil matrix of 67 x 64 cm (26.4 x 25.2 in) at €20,000 will be getting a bargain," he says with a smile. Drouot Estimations will hold the auction in room 9 of the Hôtel Drouot, Sunday, January 16 at 4pm (CET).
Worth Knowing
District 13 - International Art Fair, Hôtel Drouot, Paris IXe
From Thursday, January 13 to Sunday the 16th, 2021
district13artfair.com
DISTRICT 13
Salle 9 - Hôtel Drouot - 75009
Drouot Estimations
Info and sales conditions
Catalogue

Gallery owners all over the world have been eagerly awaiting it....

The international event returns to Place de la Bourse with a tempting...

From May 19 to 22, Europe’s leading contemporary drawing fair will...

Paris: Drawing in the Spotlight Again with Quartier...

The art galleries of the Quartier Art Drouot (QAD) will be open to...